After yesterday’s mega photo post on our trip up the Kancamagus Scenic Drive…I actually didn’t finish up to date but Neil hadn’t finished processing photos from Thursday so I just couldn’t go any farther. We did some Fun Stuff on Friday so let’s get back to things.

Thursday’s Fun Stuff© involved a stop at the Mount Washington Observatory Discovery Center in North Conway where we toured the museum and had a live telecast with one of the weather folks up at the summit, then a stop at Camping World for a window handle, a trip down to see the Madison Boulder and finally we headed up the Kancamagus again but really were just taking a different way back home…we went across the highway 5 or 6 miles then turned onto Bear Notch Road and headed back across the pass to the campground.

Thursday evening we had a dinner out planned…our destination was the Margarita Grill and Cantina just at the end of the road into the campground. The camp host back in Hanover had recommended it to us so we decided to give it a try. On our arrival there were 2 seats at the bar but they weren’t together…but the nice ladies on the stools between the two empties scooted over one and made us space.

We started with a margarita…Neil had an Ultimate and Connie had a Cadillac…the difference between them (other than the 75 cents difference in price) was a different kind of tequila and one used Grand Marnier for the orange flavored alcohol and the other used Cointreau…both are in the Triple Sec family but due to slightly different recipes Grand Marnier is a bit sweeter and Cointreau is a bit spicer. The Reposada style tequila that was in the Ultimate is aged in barrels and has a smoother flavor. After sampling both of them…they decided that the Cadillac was actually a better tasting cocktail…it had a bit more of the tequila bite that distinguishes a good margarita. Reposada is better used for sipping straight without all the other flavors. One really nice thing about this place was that they only use fresh squeezed lime juice in their margarita cocktails and none of that nasty tasting bottled mixer crap. They had at least 3 gallons of lime juice behind the bar…even with an electric juicer that’s still a lot of lime juice and there was probably a guy back in the kitchen that does nothing but squeeze limes.

Connie had a grilled salmon dish with Aztec rice…Neil had a steak burrito…both were outstanding and we had leftovers. Connie had a brew after her margarita…she switched to Dos Equis dark and Neil had another margarita although he went with the better tasting Cadillac the second time.

We chatted with the ladies who moved over for us during dinner…the older one was named Sascha…she’s about to head off on a trip to Ireland so Neil gave her a bunch of pointers. Her younger companions were also locals and we talked with them for an hour while we ate and drank.

Friday we were again off pretty early…we planned to drive up US-302 which is locally known as the Crawford Notch Highway to look at the views, take in a couple of waterfalls and generally see what we could find on the way. We finished that up and were back home about 1200…after lunch Neil got ready for our brake pad replacement tomorrow and fixed a minor problem with our grill…very important since he’s grilling a steak for dinner tonight.

Ok, on to the photos.

As you probably know…back about 25,000 years ago during the last Ice Age most of what is now New England was covered with a couple of miles of glacial ice…and as glaciers do they gradually flow downhill…and this flow moves a lot of rocks around as the glacier moves…they were then left behind as the glacier receded and are known as glacial erratics.. One such rock is now known as the Madison Boulder…and it’s pretty big.

Head on view of the boulder. 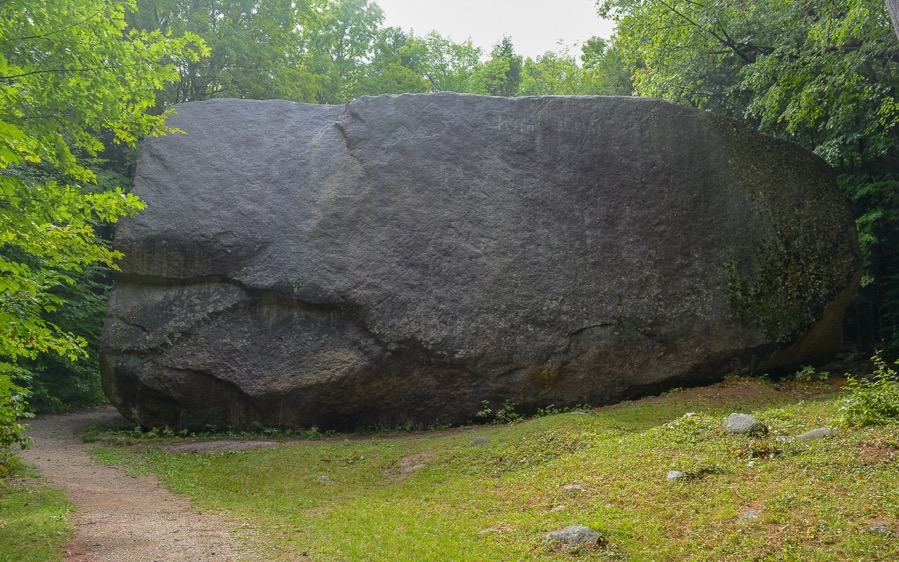 That doesn’t really give you an appreciation for the 87 foot long, 23 foot wide, 37 feet high size or 4,662 ton weight of the boulder…so here’s another shot with something in the shot to give you some scale.

Mighty darned big rock I think…the sign said it was one of the largest glacial erratics in the world.

Heading across Bear Notch Road we spotted a couple of turkeys running into the woods. 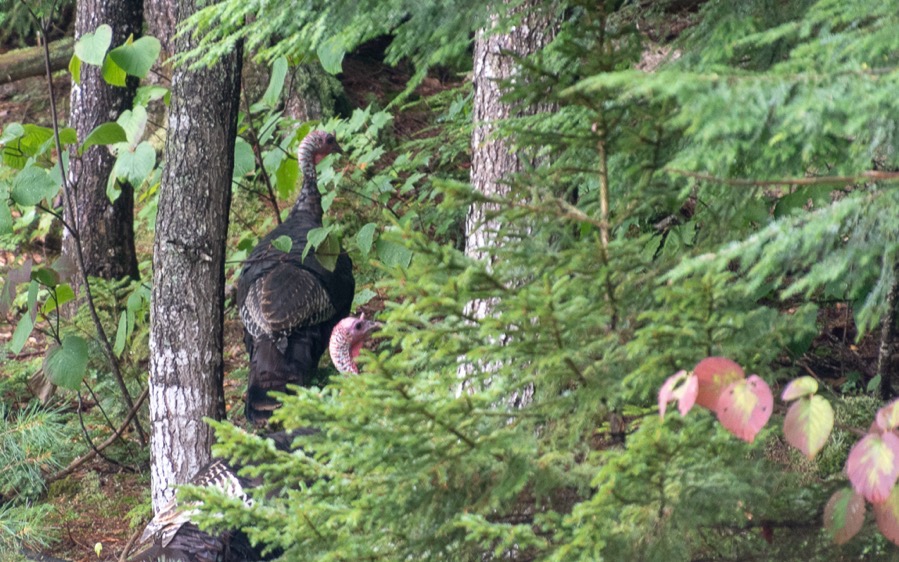 We also took a few shots at the viewpoints we passed on Bear Notch Road…starting to be little more yellow and red showing up in the leaves. 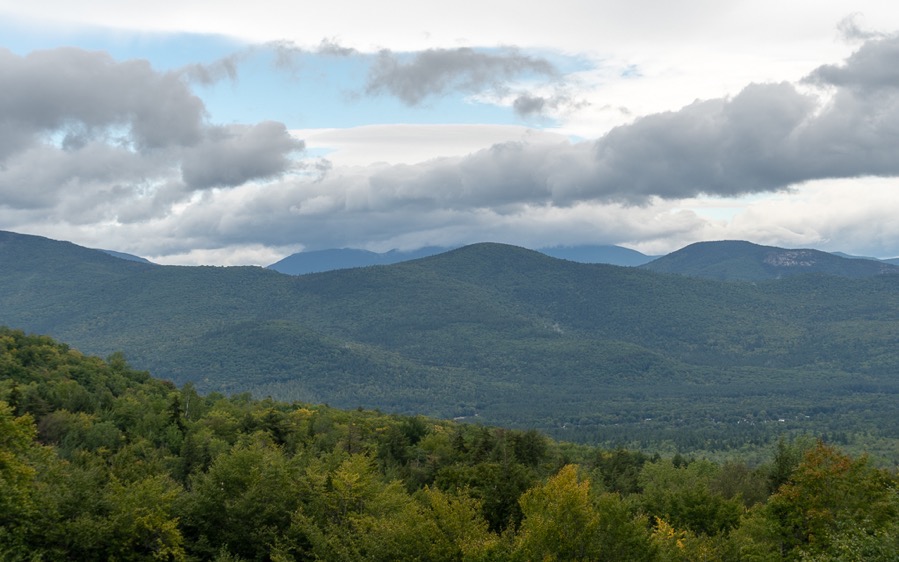 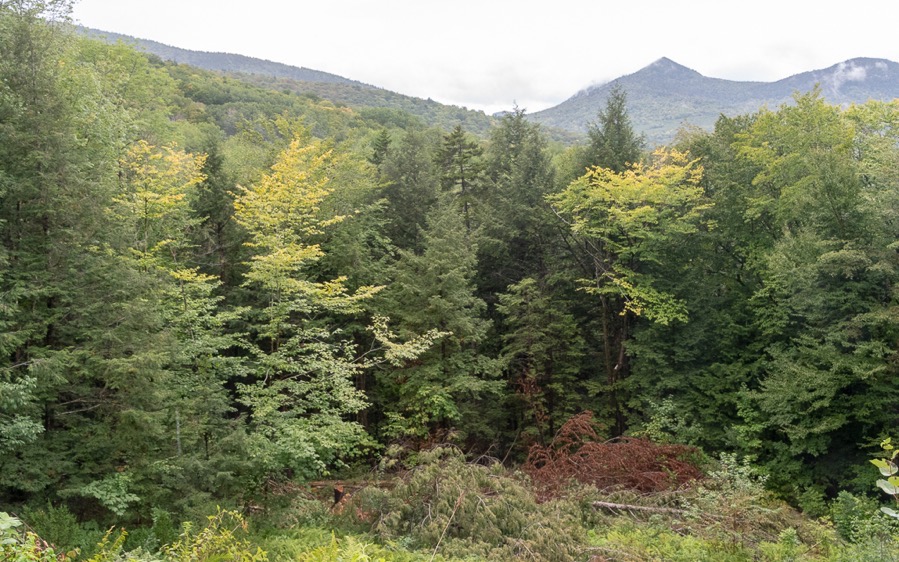 As we turned off of Bear Notch onto 302 in Bartlett just north of the campground we spotted this snow roller on the side of the road…it was used to compact the snow back in the day before snow plows were invented.

Friday morning as we headed out early we were hopeful of some nice things to photograph and see. 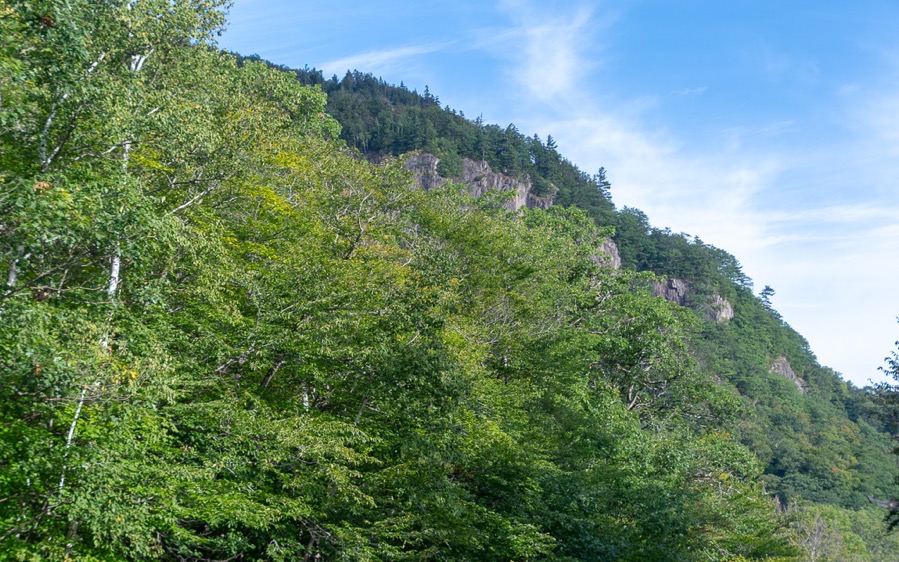 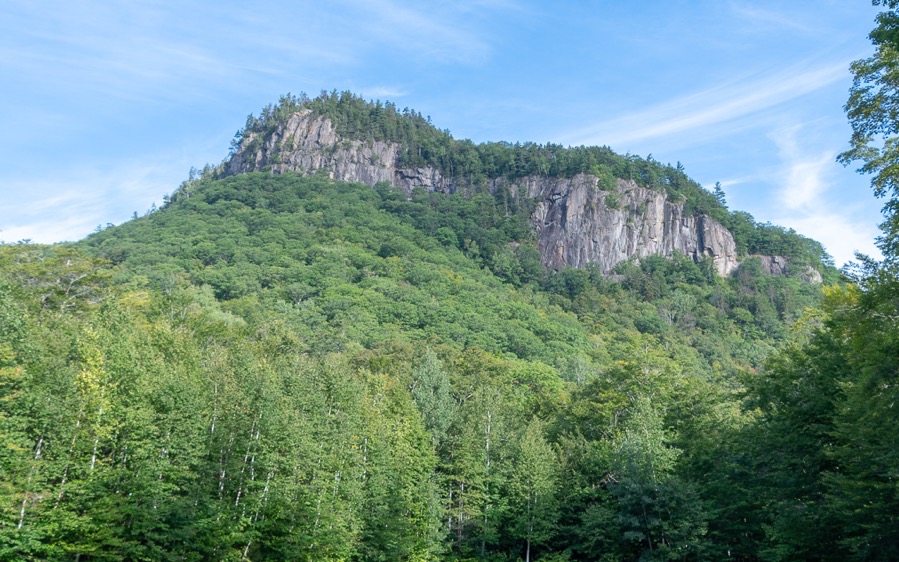 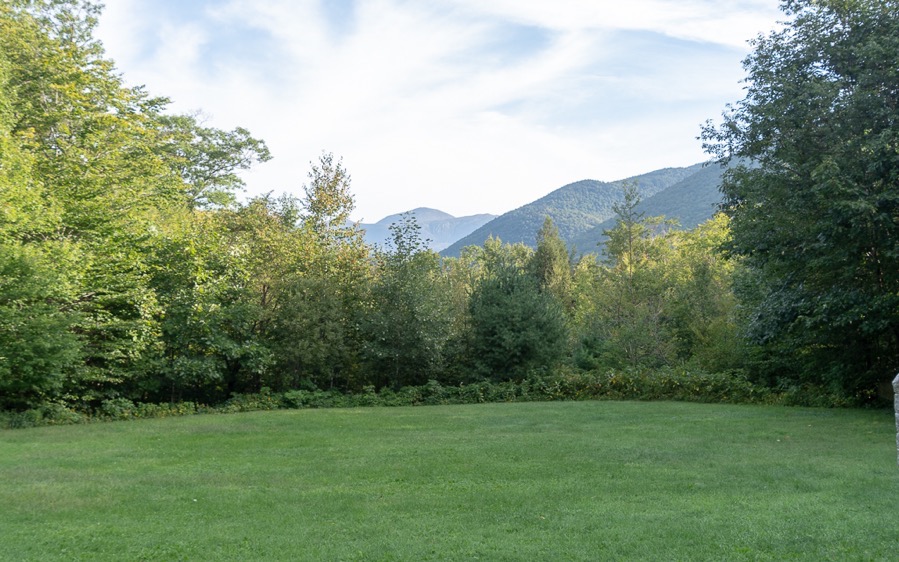 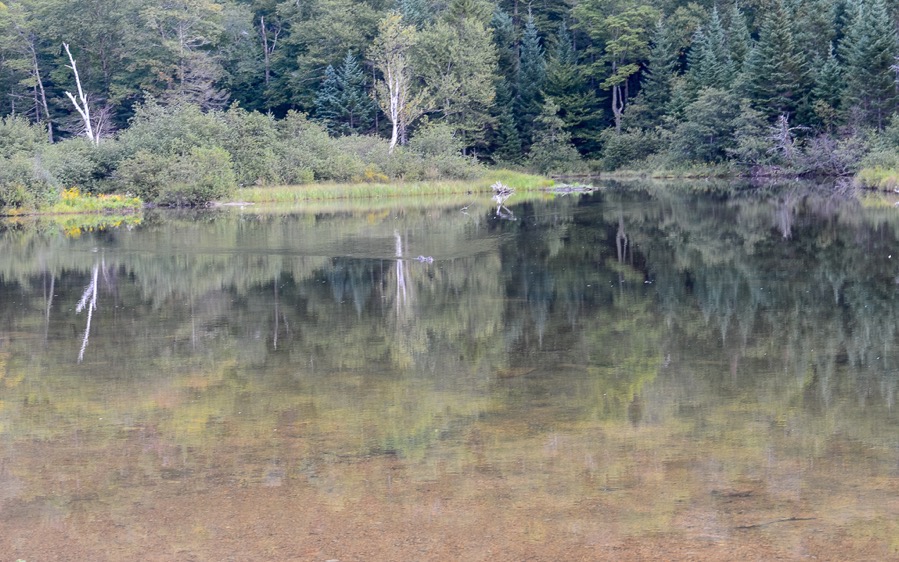 Just as the sun was peeking over the top of the mountain.

Female American Black Ducks…possible hybrid with Mallard Ducks as they are known to do…so the coloration doesn’t quite match the standard American Black.

Another turkey struttin’ his stuff. 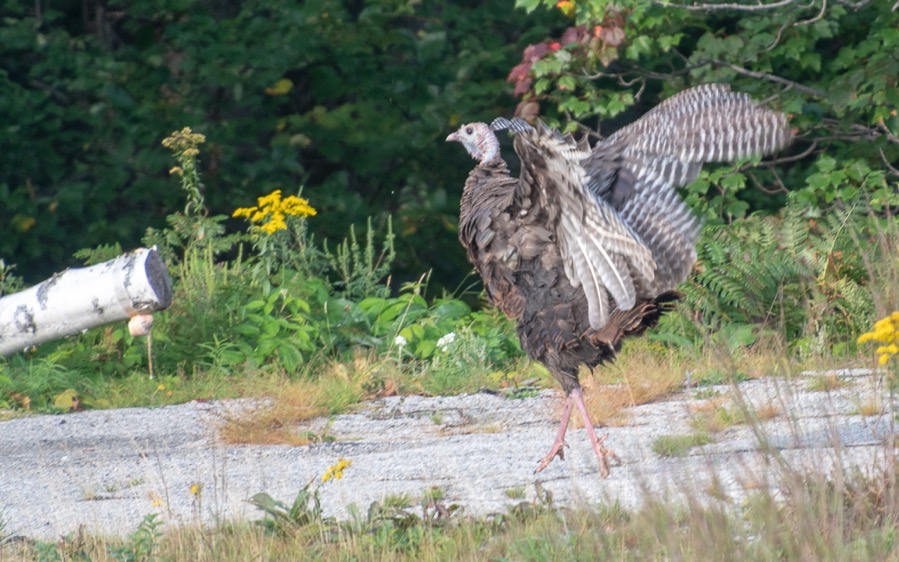 Lower Ammonoosuc Falls…where do they get these names from up here? The several following shots are also of different portions of the same falls. 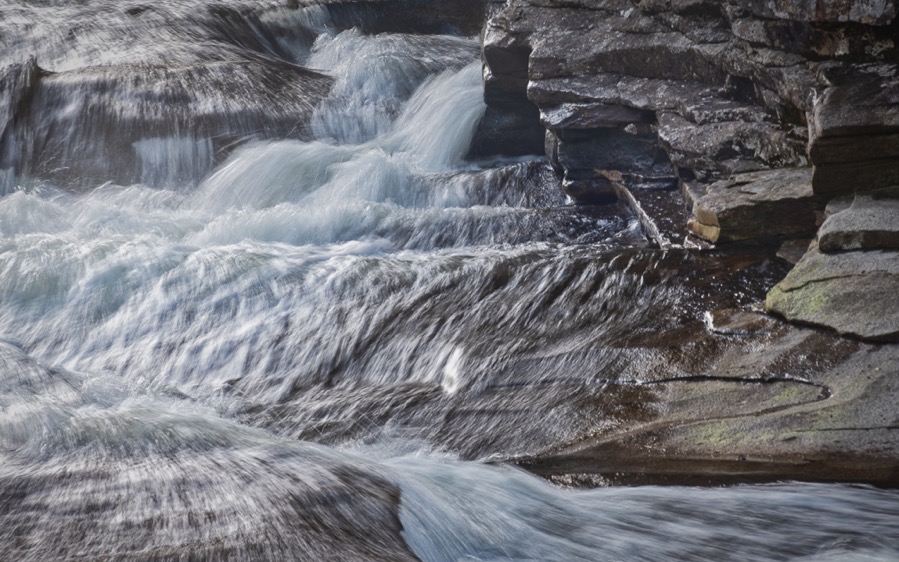 Next stop was the Mount Washington Cog Railway…one of the two ways to get to the top. So…just what is a cog railroad? Most railroads try to keep their maximum gradient at 2% or less and almost always below 4%…although the maximum theoretical gradient for a standard steel wheel on steel rails train is about 20%. Troubles arise when the gradients get as high as they are on this passenger only railroad…most of it is at a gradient of 35% and it tops out at almost 38%…which means the train could never get up…and if it did it would slide all the way to the bottom once it started moving. So…the cog railroad was invented…the Mount Washington one was the first one ever built.

Instead of the engine driving the wheels directly…it drives a pair of gears called cogs that are engaged with a set of teeth impeded in the track…essentially it works like a rack and pinion assembly. This allows the train to get up the higher gradients.

Model of how the cog and track work. The black cog is driven by the engine and it rotates against a series of fixed roller shaped teeth in the track bed…the inset at the upper left of the photo shows the actual cog and track mechanism. 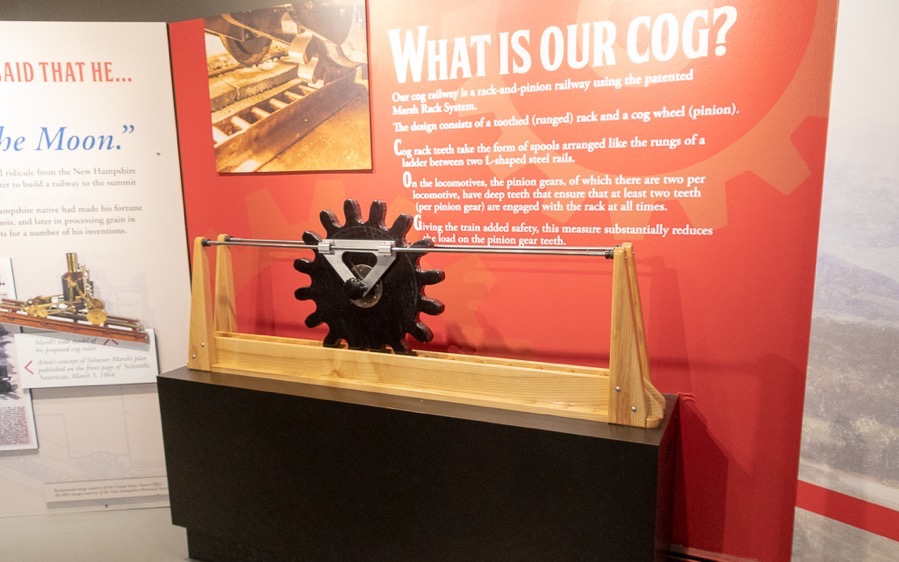 A couple of shots of the trains heading up. The smoke up the track is another of the trains higher up…the line currently runs 2 steam locomotives and 9 that run on diesel. All were designed and built here at the site.

Our last stop of the day was Glen Ellis Falls…then we headed home for lunch. At 64 feet drop…this is the largest single drop fall we’ve seen this week…although several of the step type were higher in total drop.

A couple of unnamed falls both downstream and upstream of Glen Ellis. 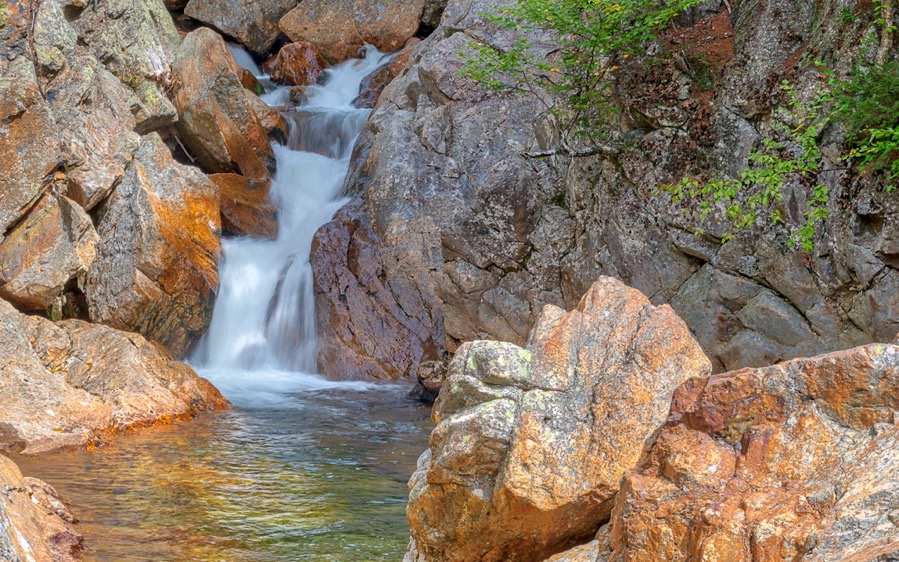 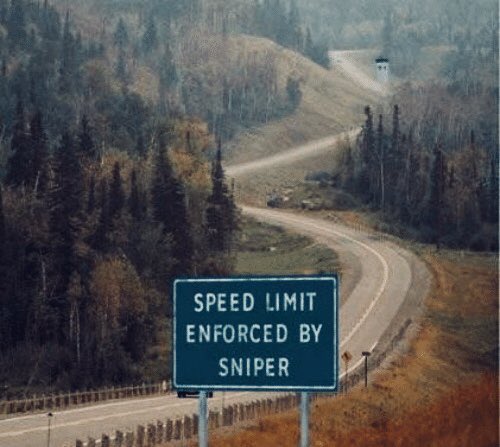 Let me in…we got a situation here. 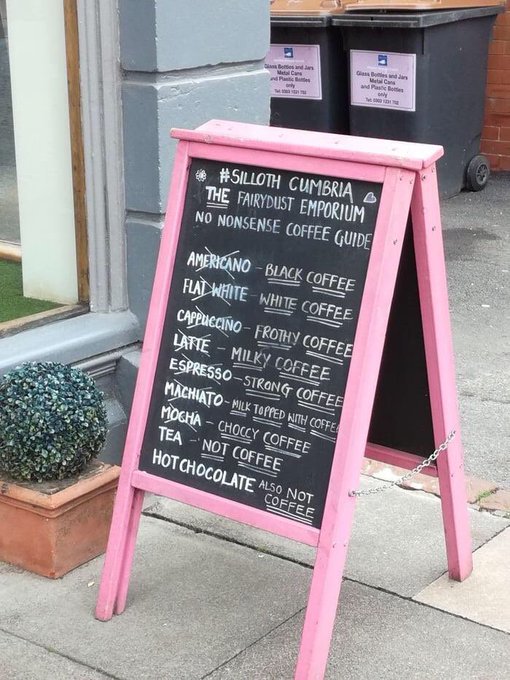