With our time in Randolph Center finished…we headed off early Tuesday morning…well not that early actually as we only had about 126 miles to go to our next destination…we actually left shortly after 1000 and of our 126 miles about 90 of them were down the freeway so it was easy driving. Once we got off of the highway at Brattleboro VT we headed west on VT-9 the last 30 odd miles to our stop at Camp Greenwood RV and Lodges outside of Bennington…the campground is up on top of the mountain where Prospect Mountain Ski Area is located…this is a cross country skiing only park with 30 kilometers of groomed trails during the winter. It had rained pretty heavily overnight in the Bennington area so although we arrived in nice weather the stream which VT-9 parallels the whole way was pretty full and rushing quickly downstream.

We pulled in, finished checking in and then headed off to our site 26…a nice full through 50 amp water and electric site…there are not sewer connections here at all except for the dump station up by the office. No worries…we are only scheduled for 6 days here so we’ll just head up to the bath house…which is inside the office building/owners quarters so it’s a nice inside shower facility with none of the spiders or bugs that Connie hates. It was a bit downhill and then uphill to get into the site…but once in we discovered it was actually almost level so it was an easy setup job this time. Hookup was minimal with no sewer.

Wednesday was a day for laundry…we went into town to a commercial facility as no laundry facilities are at the campground…then Connie got her nails done, Neil picked up a few groceries we needed at the world’s worst grocery store…they didn’t even have peanut butter…he considered leaving and going across the street to the super Walmart but didn’t want to end up in the long checkout lines typical there so he just got the minimum and we headed home.

Later in the afternoon…we went down to the local Elks Lodge…where we met the Exalted Ruler or ER…she’s only 46 which is pretty young in our experience for being the ER as the Elks is mostly an older member type of organization. She told us that the Grand Exalted Ruler (GER)…the GER is the head Elk of the entire organization…was going to stop by for a visit so we hung around and met Michael T. Luhr and his wife before heading home for the day. They’re from one of the Lodges in Alaska.

Thursday…we pretty much did nothing. We went down into Bennington at 1000 for a phone conversation with the CEO of our financial advisor Cassaday and Company…we’re participating in their annual Investor Symposium next month on a panel about full time RVing…some of their other clients are considering this lifestyle so we will answer questions along with another two couples about RVing, full timing, and associated topics. After that we just hung around the rest of the day.

Friday we had the first portion of why we chose Bennington as a destination in the first place…the Vermont Wine and Cheese Festival which is sponsored by Snowe Mountain Ski Resort. The festival consists of a Wine and Soup Tour on Friday evening in the town of Wilmington east of Bennington and just south of the ski resort…we spent a nice couple of hours walking around downtown, sampling both soups and wines. All of the soups we tried were pretty good with only 2 of those being something we would not have wanted a full bowl of…and we skipped a half dozen or so of the offerings as they were types of soup we don’t particularly care for and we were getting full by that time anyway. Even though we only had 3 or 4 spoonfuls of each offering…by the time you’ve had 15 of them it’s a lot of soup…and since most of them were either bisque, gumbo, or chowder they were all rich. Each participant in the walk got to vote on his/her favorite soup…the winner only gets bragging rights but apparently it’s a big thing in the town of Wilmington. The most popular version was corn chowder…and although the 4 versions we tried were all delicious we were pretty much decided that the last corn chowder would be the winter until we sampled our last one. That one turned out to be a vegan corn bisque…it had no dairy, meat, or most of the other good things we normally put in soup…but it had the best corn flavor of any we tried by far. Given the vegan nature so no bacon, no pork fat, no dairy…it was mostly just cooked corn that was then pureed and then strained to remove any remaining corn kernel skin leaving just the corny goodness inside in the soup. Add some spice and it was pretty spectacular…both Connie and Neil were amazed by the flavor possible in a vegan soup.

Saturday we headed off and arrived at the ski resort just after the festival opened at 1000…and spent 3 hours wandering around, sampling wines and many, many distilled spirits as well as several different maple syrup varieties, then we sat down and had a taco for lunch before heading back to make some purchases. We ended up with 5 bottles of wine including one white that was aged in barrels used to age maple syrup, a bottle of maple flavored rum that was far and away the best distilled spirit we tried, a bottle of Maple Cream which is like Bailey’s Irish Cream except it’s maple flavored instead…and our two highlight buys. The first of these was Pineapple Habanero Jelly…sweet and spicy hot it’s a condiment type of jelly usually served with cheese and crackers…and a bottle of maple syrup flavored with Carolina Ghost Peppers…again sweet and hot. The syrup is too spicy to use on normal syrup things like waffles or pancakes…but will be perfect in baked beans or as a component of a sauce for chicken or pork.

After our arrival home…we watched ‘Bama trounce Texas A&M 43-22 while eating dinner…then as Connie was doing the dishes she happened to look out our back window and said…”my goodness, look at the sunset”. Neil took one look and ran outside with his iPhone to grab a couple of shots. 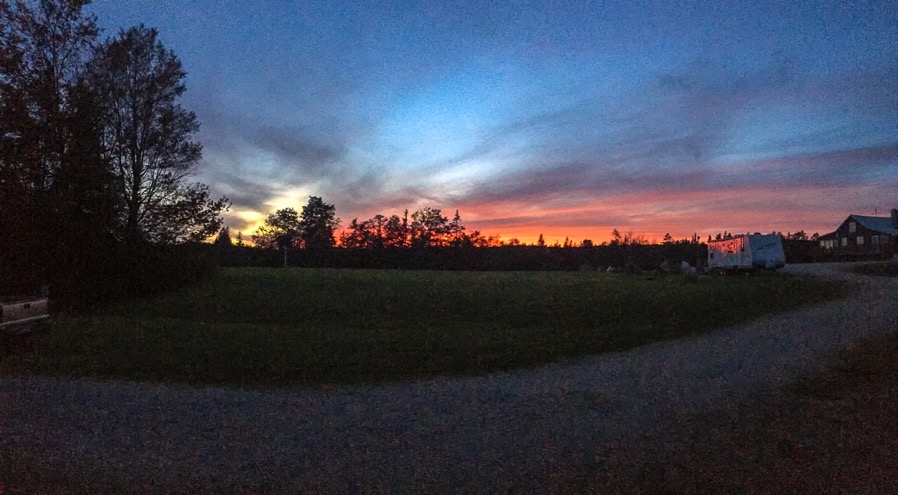 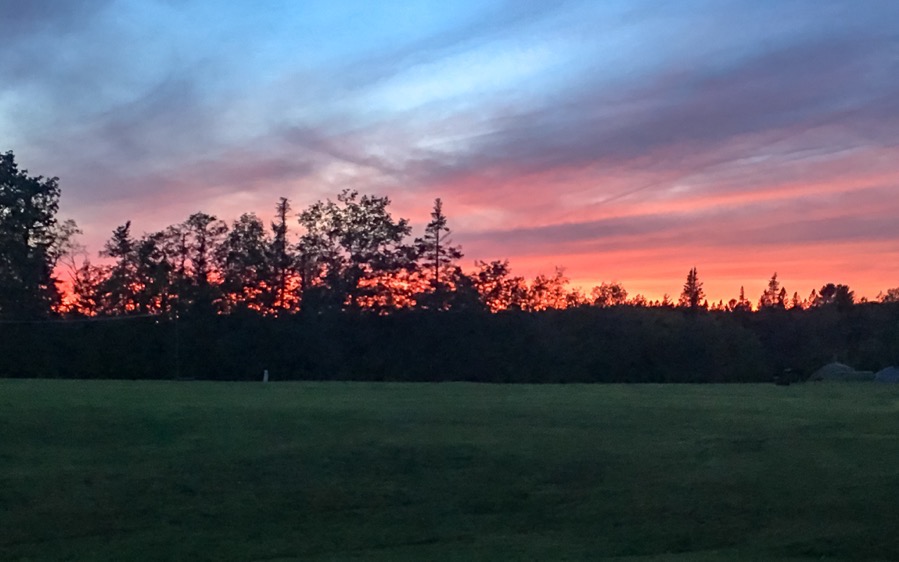 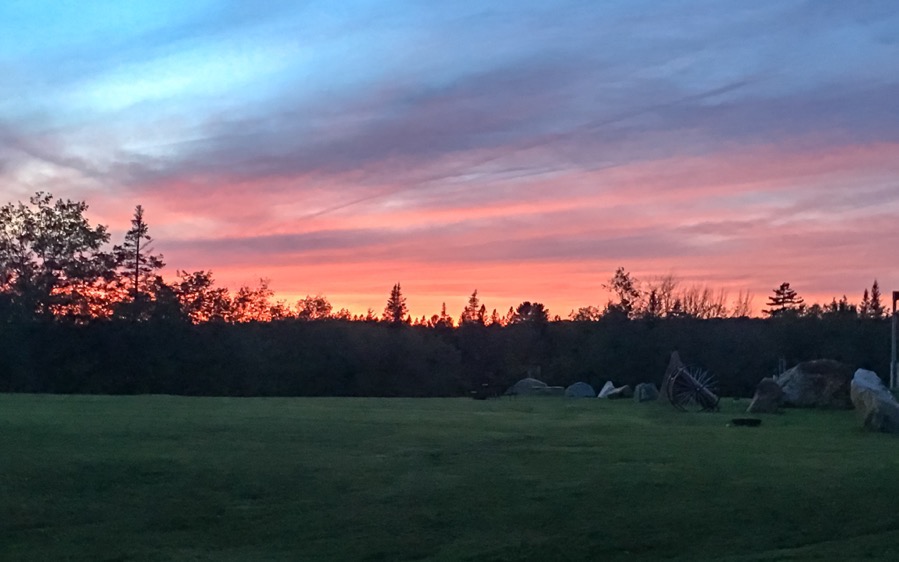 Sunday we headed out for a drive around southwestern VT…our goal was to just hit a bunch of back roads for about 70 miles or so and see what we could find.

We got a nice pano at the top of one of the ridges we made our way up and over.

Connie snapped this country store while Neil was pumping gas into Li’l Red. 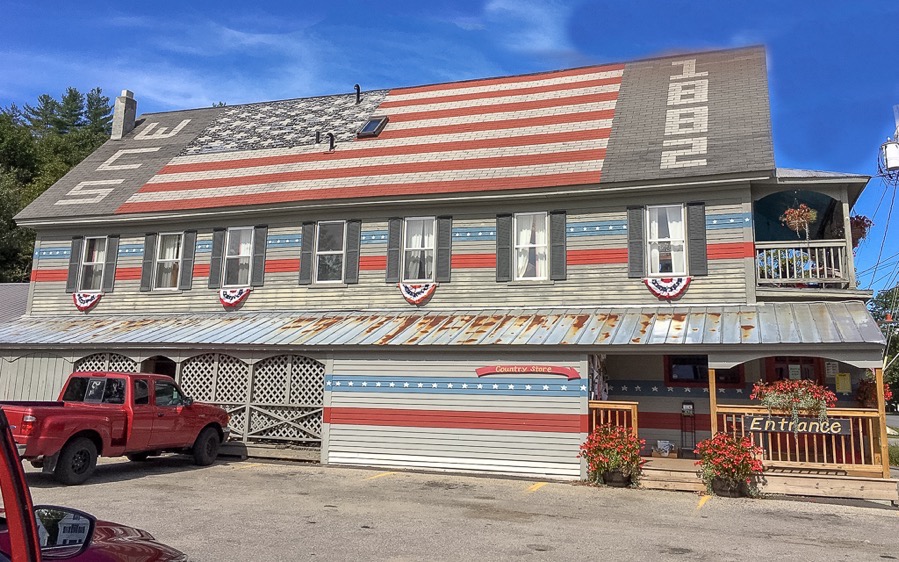 I can definitely confirm that there are indeed…good ole boys in the state of VT…down south we might call ‘em redneck but they’re definitely up here as well. Ya want proof?

First there was this. 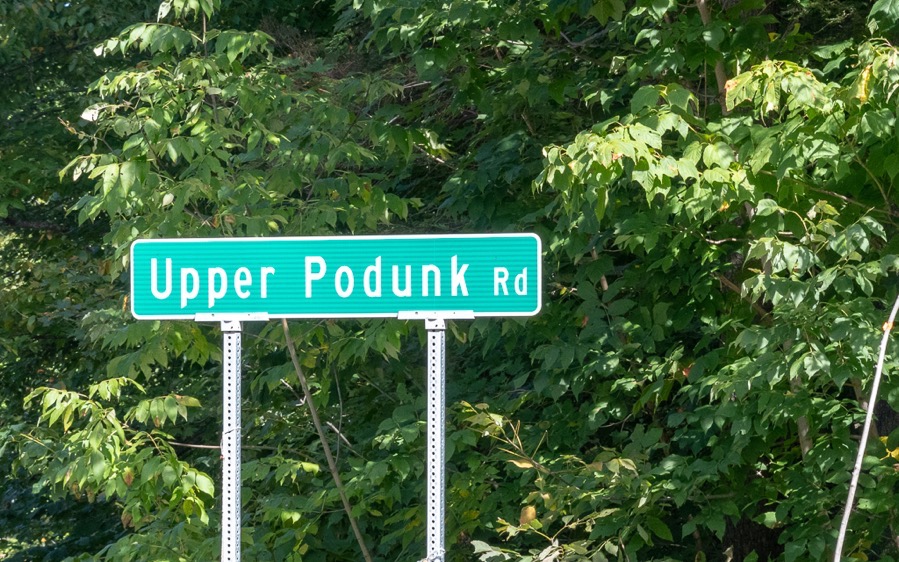 And just a bit down the road it’s friend. 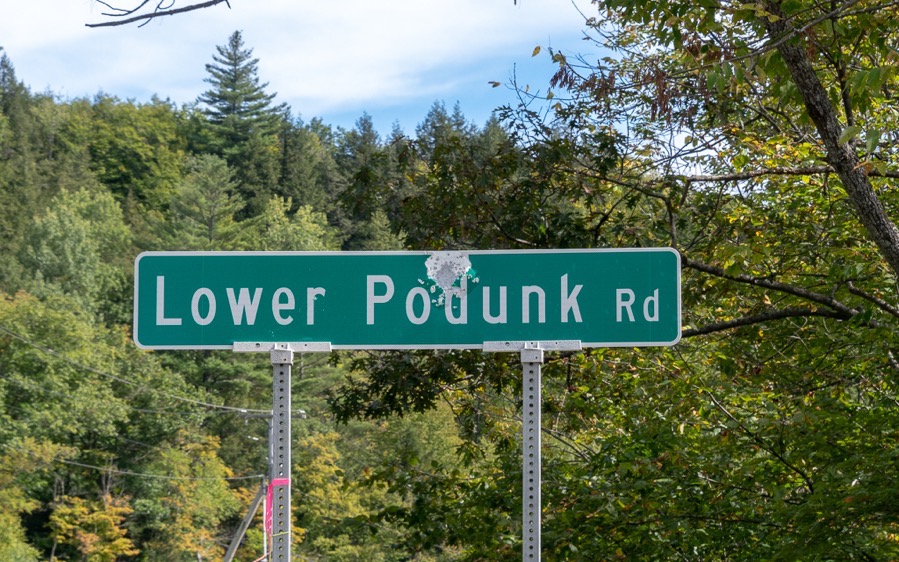 Then there was this good ole boy truck in somebody’s front yard…looks perfectly serviceable to me. 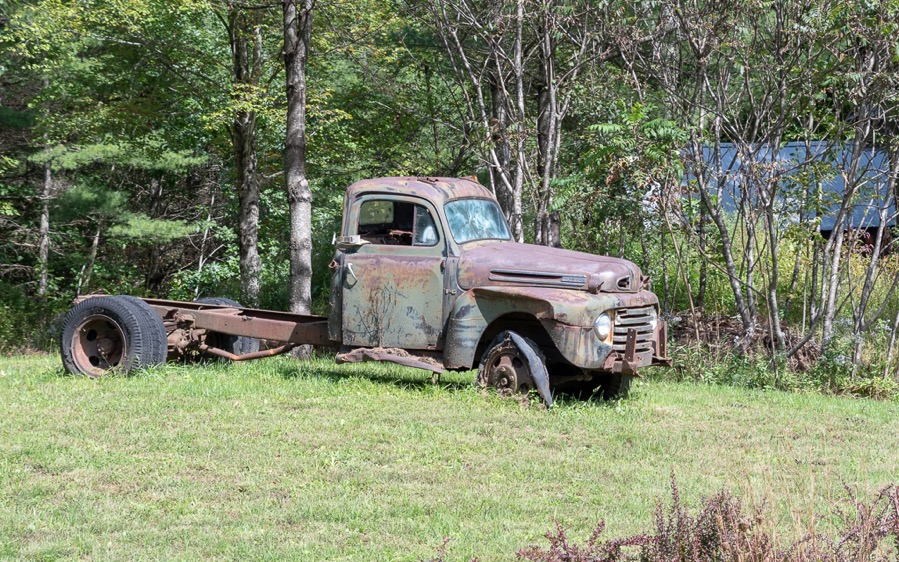 We found a memorial to Daniel Webster…he spoke to the Whig Party on this site in 1840 to a crowd of 15,000 people…he musta had quite a voice to be audible to all of them. 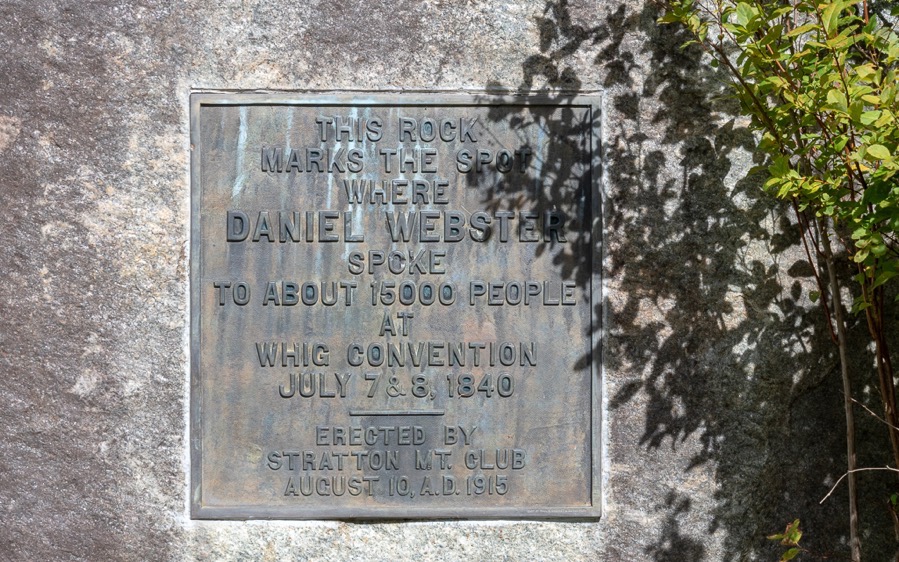 A nice covered bridge we went down a dirt road from the highway a couple hundred yards to find…again still in use as we drove across it twice. These are the best two shots Neil got…there was no way to really get a nice side shot of it. 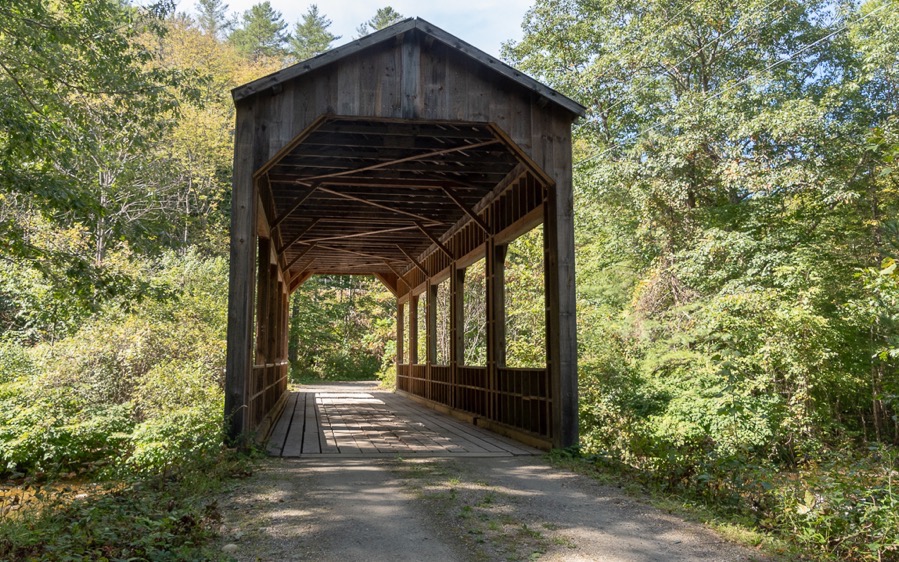 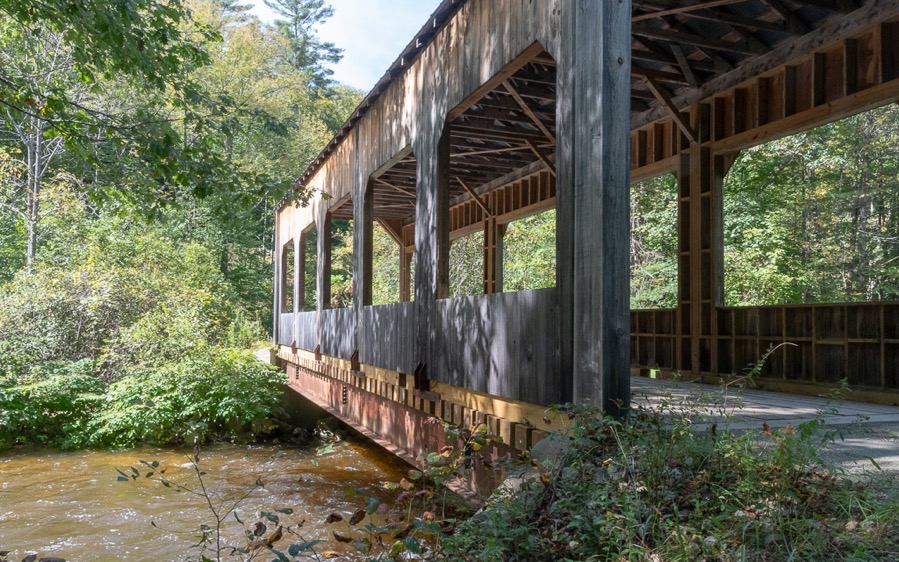 On the way back into Bennington at the end of our drive we spotted this in the distance and drove around until we found it. It’s a memorial dedicated to the 1777 Battle of Bennington during the American Revolution…General Stark and his 1,400 troops from the nearby state of NH came over and help the VT boys rout the British forces when they tried to capture the store of arms at the courthouse that’s on this site…very similar to the way the Minutemen battled them at Concord over a similar attempted arms raid by the British. 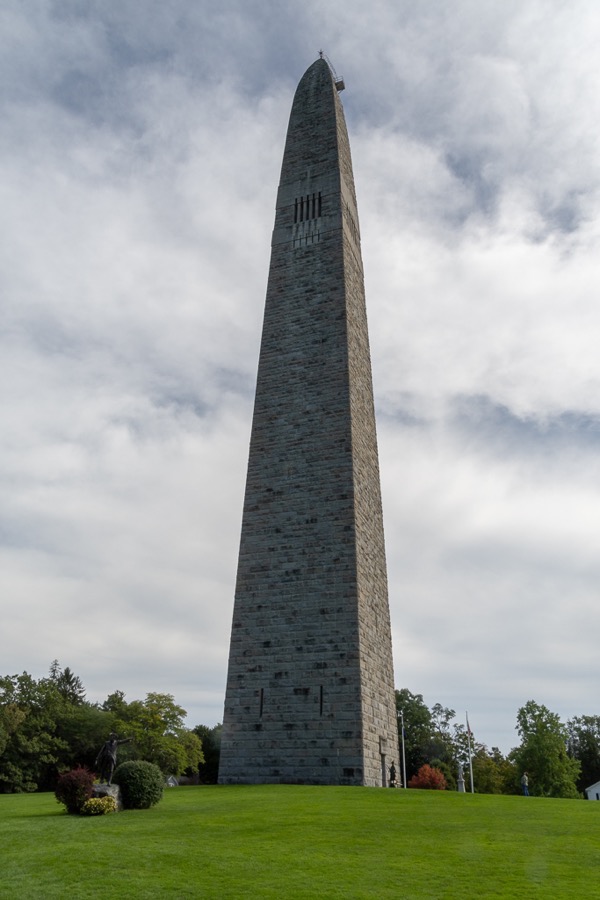 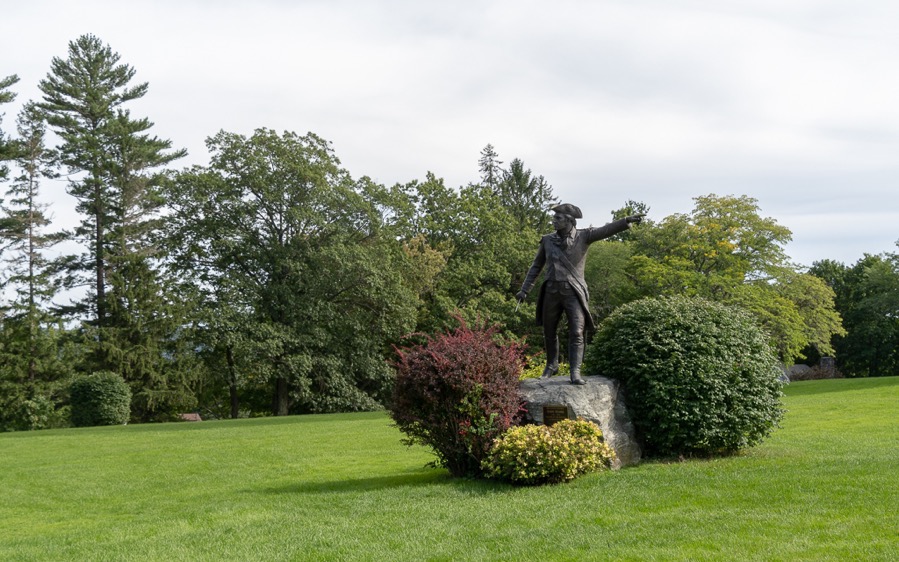 Connie got a closeup of the dolomite sandstone blocks that make up the 300 foot tall obelisk. It’s open to tourists via an elevator to the top but we passed on buying tickets to the top. 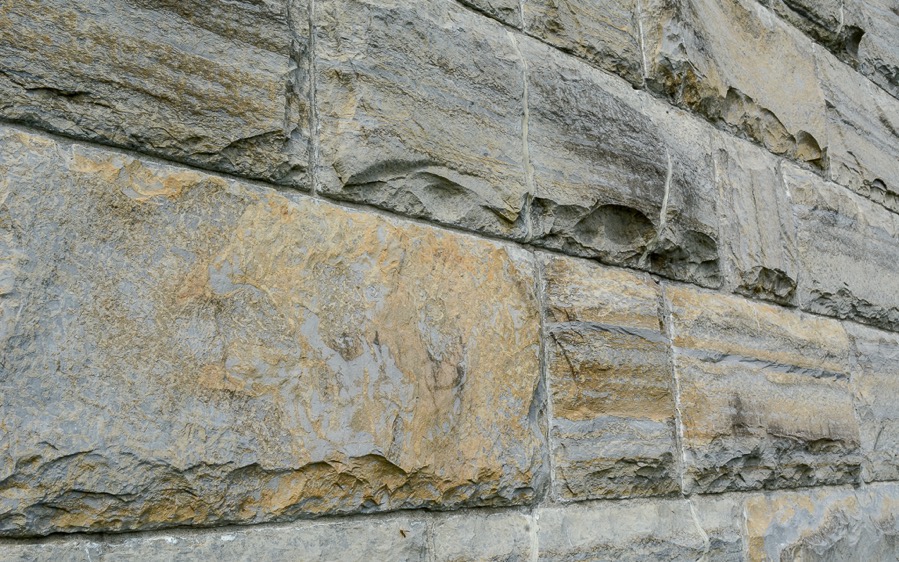 This is Benny the Covered Bridge Moose located at the memorial. 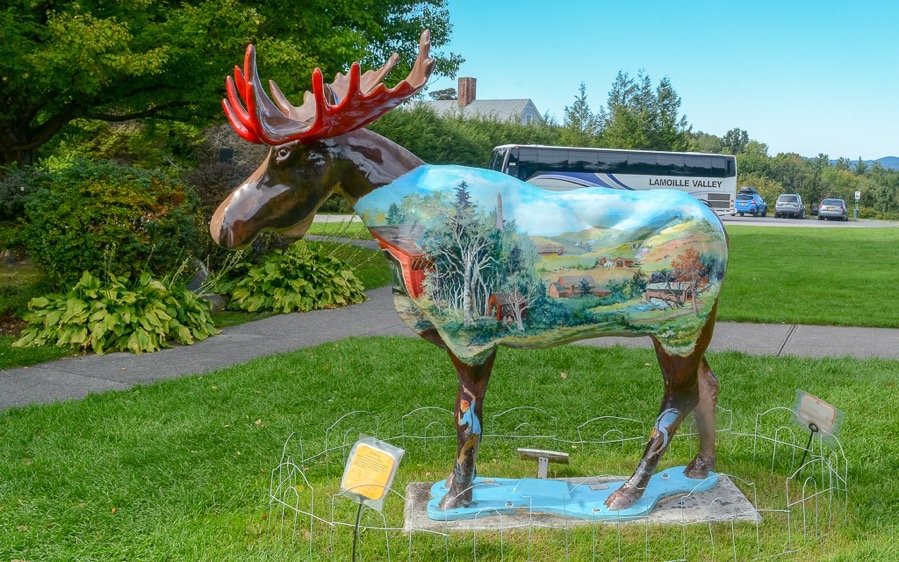 We headed home after that…with a stop at the Elks Lodge for Happy Hour…then we had oven roasted potatoes and a steak with a sauce made of butter, roasted garlic, hot sauce, and some of the Ghost Pepper maple syrup we got yesterday at the festival…quite yummy. Afterwards Neil grabbed a shot of today’s sunset…not quite as colorful as yesterday’s but he had the real camera with him instead of just his iPhone so he got a less noisy shot. 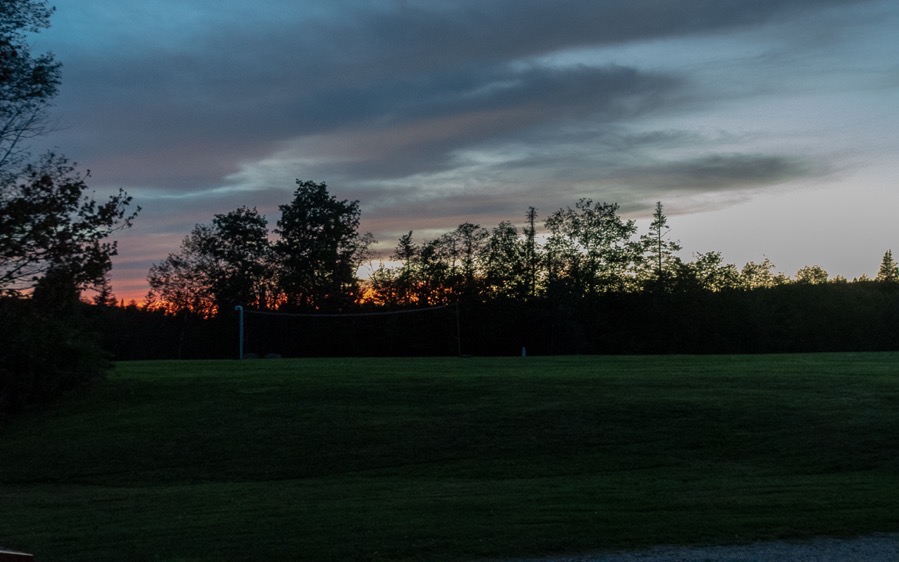