After our travel here to Country Aire Campground in Charlemont MA last Monday…and the outstanding dinner we had afterwards…we planned to do nothing on Tuesday and Wednesday…Tuesday it was supposed to be cloudy all day which means no nice light for photography and Wednesday it was scheduled to rain. Sure enough…the forecast for both of those days held true so the only thing we did was drive down to the local Elks Lodge in Greenfield just a couple blocks from The Peoples Pint I wrote about in my last post…and it turned out to be one of the nicest lodges we’ve visited in quite awhile. The parking lot was pretty full when we got there about 1530…but it turned out the lodge had rented out it’s dining room for a catered post-funeral reception…so we just proceeded past the dining room to the bar anyway. We had a couple of pints of Leftie’s Honey Brown Ale…Leftie’s is a local Greenfield MA brewery just another few blocks from the lodge…but then Greenfield is a pretty small place so most everything is just a few blocks from most everything else.

We sat down…there were two seats but not two adjacent seats and the members quickly made them adjacent for us…we sat next to the Exalted Ruler (ER) and the bartender turned down our $50 bill as the first two were “on them” for guests from other lodges. The Lefties were so good that we ordered another couple…which were again paid for by the guy sitting on the other side of us…Neil repaid the favor by buying him a couple brews as well. The second pair was so good that…you guessed it…we had a third pair of pints before finally heading out for dinner.

We had taken chicken out and planned to cook it…but by that time we were tired so Neil asked what the best pizza place in town was…the unanimous vote was for Village Pizza just…again, you guessed it…just a couple blocks down. We stopped by and ordered a pie with sausage (Italian of course), mushrooms, and extra cheese…and grabbed a piece of baklava from their display for dessert as well. We took it home…poured us a couple of short glasses of wine from the fridge…and sat down to the best pizza we’ve had in months…the last time we had one close to this good was way back in June in Little Bras d’Or in Nova Scotia…and this one topped even that one. We ate it all save two slices which we saved for later on.

With all that done…we headed out early Thursday morning about 0900 for a day of Fun Stuff©…Connie the DLETC had planned a nice drive for us on little country roads and along the Connecticut River hunting for fall foliage, any other interesting stuff we might see along the way, lunch and Happy Hour…and then Neil suggested adding Bonus Happy Hour to the schedule and popping into the Lodge again on the way by…since we were going right past it on the way back to the rig.

It was a nice sunny day and we completely enjoyed our drive…did not see as much foliage as were hoping for but we did get a bit as well as some other interesting stuff.

Lunch and Happy Hour were planned for the Rendezvous in Turners Falls…we had a couple pints of Berkshire Brewing Company Steel Ale which was a lighter brew but they didn’t have any darker ones, no stouts or porters, and everything else on tap was an IPA which we passed on. We also had a couple of pretty decent burgers…not quite as good as the at The People’s Pint but pretty darned good nonetheless. We also suffered through a a few minutes of the additional Kavanaugh committee hearing on CNN until the young lady tending bar got irritated at our disgust over the way things were being handled and turned it off…so much the better since we didn’t want to hear it anyway. After lunch we finished up the rest of our drive…we only had to back track once as the DLETC’s directions were less than accurate…not her fault as Maps said there was this small bridge over the Connecticut River but the road dead ended into a dirt path with no bridge so we just found another way across. We stopped by the lodge for another quick cocktail before heading home. Dinner was the aforementioned leftover Village Pizza pie along with the leftovers from our dinner the day before…fish chowder.

It rained most of the night overnight and  into Friday so we stayed home again…I think she has more stuff planned for the weekend…but ya never know.

OK…on to phots from our drive. I was hoping we would have some wide angle, full color foliage shots to post…but it appears that we’ll miss the peak leaf peeping season here in New England. So I’ve had to selectively frame shots to give you some of the autumnal colors while keeping as much as possible things like roads, cars, power lines and the like out of the frame. Not really what I wanted to have…but it is what it is. While some of these might look a little oversaturated…they’re really not…it was such a beautiful blue sky day and the natural colors are so vivid that you almost think you’re in a surrealistic landscape when you see the colors.

We liked both this tree in the yard and the house itself in the background…there are a lot of similar architecture and coloring houses up in this area…we saw ones like this over and over. 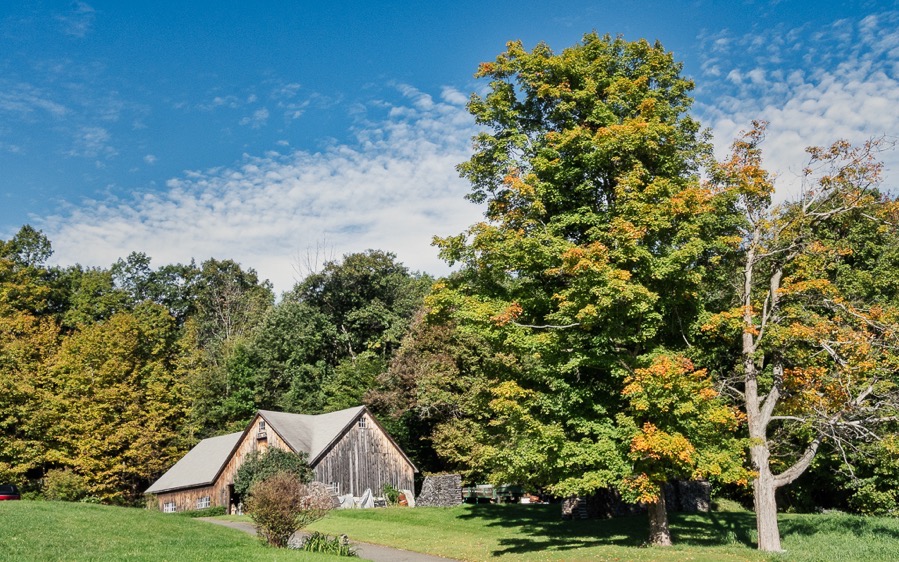 We drove up to the summit of Mount Holyoke…not all that tall but it’s about 700 or 800 feet above the river and was quite a twisty, narrow, low clearance, switchback road on the way up…definitely not rig worthy. We saw many hikers trekking up the barely one lane wide road…but instead we “Chose wisely” as the old knight said and drove up. 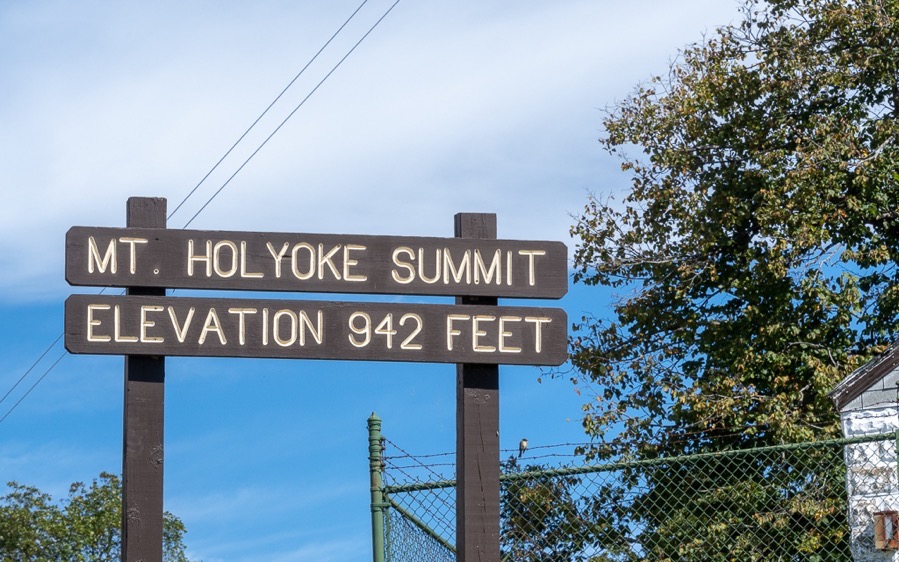 Broad Winged Hawk soaring over the countryside below taken from the Summit Inn on Mount Holyoke. Neil didn’t have the bird lens with him…so I cropped this in as best I could. 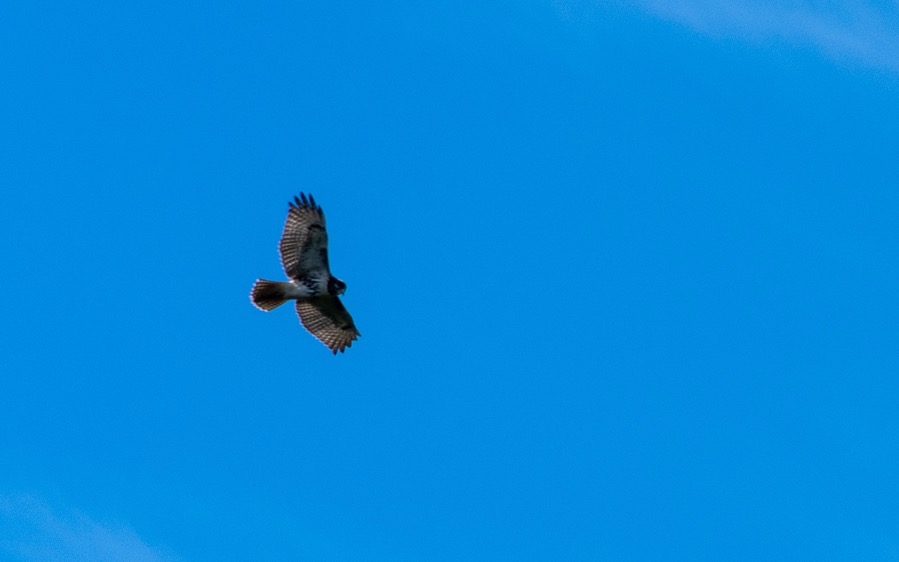 Panoramic view of the oxbow bend in the Connecticut River below. For those of you who wonder what an oxbow bend is…rivers in mountains frequently have many S-shaped bends in them that reverse geographic direction over and over. You start with a bend that looks like a sideways U when viewed from overhead with a peninsular like protuberance of land in the interior of the U. Over the centuries…the action of the river gradually thins out the center portion of the land so that it looks like a balloon on a string…and eventually cuts entirely through the peninsula resulting in an island in the river and a new main channel that bypasses the former loop…which is then known as an oxbow as it’s shaped very much like the collar that was used when oxen were hitched up to pull wagons. The new main channel is visible across the center of this shot with the backwater oxbow bend sort of visible in the background. 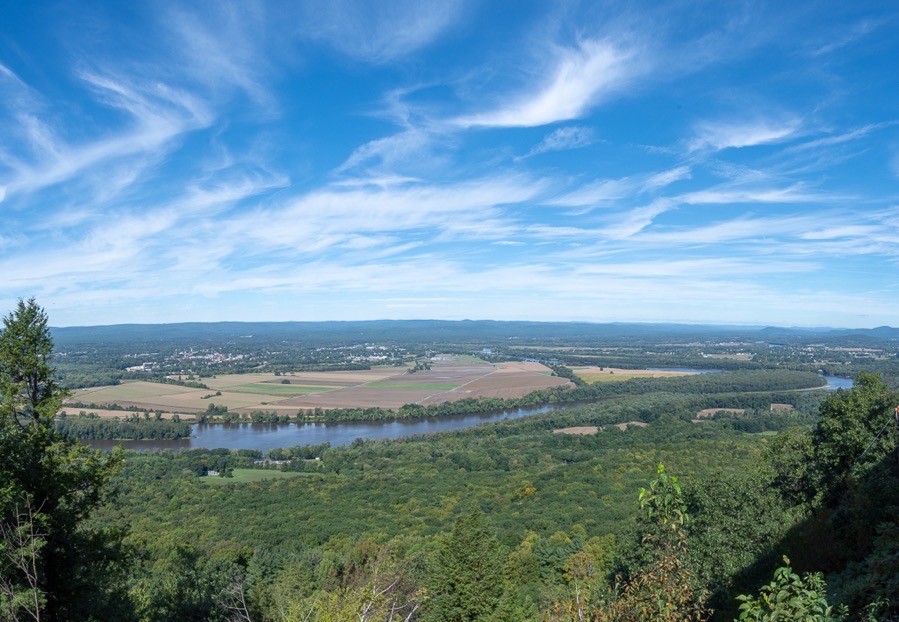 We saw dozens of these on our drive…we immediately recognized them as tobacco drying barns which was interesting to us for a bunch of reasons. First…we always thought tobacco was a warm weather crop but apparently it was common up here. Due to the mostly dilapidated nature of most of the ones we saw…we thought that they were antique structures that had been converted to other farm uses…storing tractors or grain or the like. The vertical slats on the side are built so that every other one is movable and can be rotated out on it’s vertical axis along one ledge to increase the air flow through the barn throughout the crop’s several months long drying process.

Turns out…they do still grow the crop up here…another thing we were surprised about as given the downwards trend of both smoking and the tobacco industry over the past 30 years or so we figured that it would not be a common crop. I guess there are still enough smokers to keep the demand up…and the various tobacco companies issue quotas to their farmers that are jealously guarded and passed down generation to generation as it used to be…and probably still is…a pretty decent moneymaker for the growers.

Another tree in a yard…we pulled into the driveway and grabbed a couple of shots. 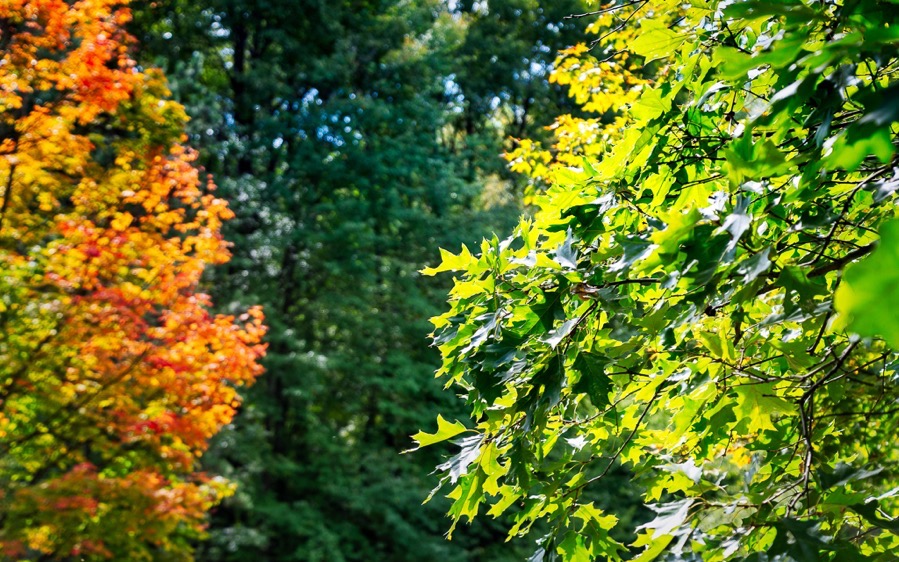 Finally…a cause I can get behind.