Ok…we got to Travis AFB Fam Camp in Fairfield CA as I discussed last time. The nice lady at the office moved us from our original site 6 to 71…she said it was better but on getting there it was certainly a nicer site but getting into it was more difficult as all the nearby sites had trucks and vans parked so that there wasn’t a whole lot of clearance.

Nonetheless…the guy directly across the street gladly moved his van and we got backed in…took several back and forth movements as there was limited space but we got backed in just fine and setup. We started both of our A/C units but by about 2000 or so we turned them off as the weather was cool and the breeze was in the 25 knots range so plenty of ventilation.

We had a late lunch…and by the time for dinner Connie vetoed our original plan of Taco Tuesday at the Elks about 15 miles north…Neil woulda vetoed it if she didn’t as neither of us really felt that great. We did feel like sushi…so we headed to a place literally about 500 yards from the Fam Camp but outside the base…the reviews said it was the best inexpensive sushi place in the area. I can agree that the sushi was excellent…but with a total bill of $75…it wasn’t cheap…but it was really good and Connie had enough leftovers for lunch the next day.

We had no plans at all for Wednesday except to rest. We got up late, had leftover carne asada venison stuff and cheese omelet for breakfast, and our big activity for the day was to walk across the street from the Fam Camp to the Exchange/Commissary complex. We needed some more papaya enzyme pills from the GNC, needed to check out the package store to see what we needed to get later when we drove over with the car…Ima not carrying all that booze back…and most importantly we needed a green pepper for our dinner.

Afterwards…Neil did some calibration work on his bird lens…but had to quit until tomorrow as the wind was too much to get the work done correctly.

For dinner…Neil really outdid himself. A couple of months back…Connie found a recipe for curry that use coconut milk as the primary sauce ingredient…we all agreed that it made a much more complex and tasty sauce than the chicken stock base we used before. However…he made some improvements on it. He used the wok and sautéed some green pepper, onions, and mushrooms then set them aside. Next…high heat on the wok and he seared 4 boneless skinless chicken thighs until almost done and set all of that aside. Next…put the veggies…the trinity you know (onions, mushrooms, and peppers) back in along with a couple of cloves of minced garlic, 5 tablespoons or so of freshly grated ginger…and a whole pastel of spices…curry powder, garam masala, coriander, crushed red peppers and several more. Let all of that toast awhile until fragrant…then add a can of coconut milk along with some chicken stock and cream…after all we need enough leftover sauce for another meal…and put the chicken back in. Check the spice…it needed some more salt and some hot sauce…and let it simmer for 5 minutes or so. He had previously started some rice with saffron in it and they finished the rest of the meal right about the time the rice was done. I gotta tellya…it was truly outstanding…deep, rich sauce, crispy chicken and yummy rice and veggies. And best of all…leftovers for tomorrow.

We never did start the A/C units back up today…it got to the low 80s but with the breeze and low humidity the weather was gorgeous.

Ok…I promised you some photos from the primary tourist attraction in Carson City so here we go.

As you may…or may not…know…prostitution is illegal in almost of the US…the one place where it is legal is in Nevada…but not the whole state, just a single county that contains Carson City. In the bordellos in NV…usually known as “ranches” the employees are primarily interested in providing a service that the community perceives as needed. Ima not debating whether it should be allowed or not…or whether it’s immoral or not…that depends on your personal religious and/or moral beliefs…just documenting the facts.

Just east of downtown Carson City is an area where these establishments are located…so we decided we should go over and get a couple of photos for ya…some of them establishments actually give tours but Connie wasn’t interested in them…so we passed.

Sign at the entrance to Kit Kat Road where several of the establishments are located.

We couldn’t believe that it actually said Cathouse on the sign for this one.

And looking the third direction…these three are all within 25 yards or so of each other. 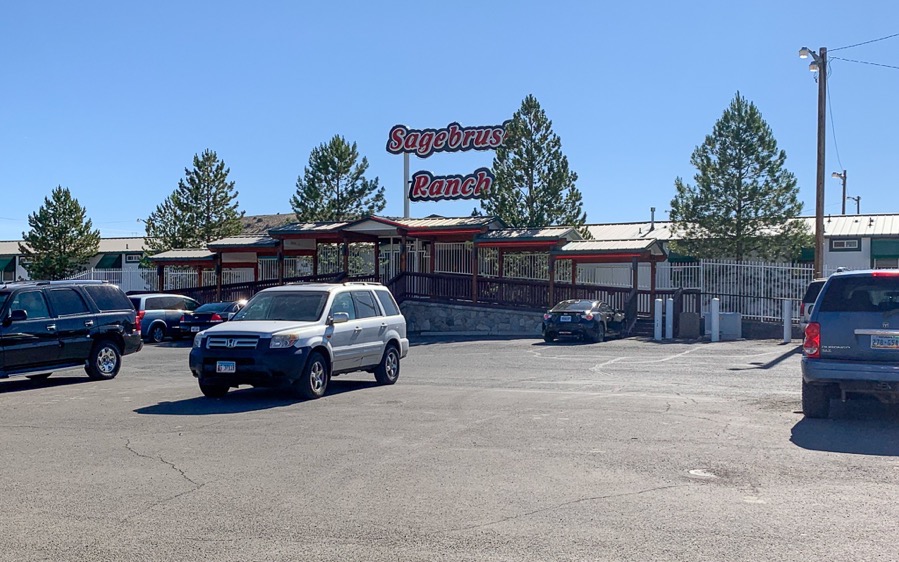 Unfortunately…we couldn’t get a decent picture of it…but there was this sign on the road into it. There was another one that said Speed Limit 69 as well…but Connie’s iPhone photo didn’t work.

Remember that “lockstep out of touch conservative majority Supreme Court”? Well…today they issued the final decisions of their term…and Justice Gorsuch…one of the aforementioned out of touch conservatives…well, he voted with the 4 liberals on the court for the 4th time this term in producing the 5-4 majority on a case. This one involved a guy in OK who was arrested in 2007 on child pornography charges and convicted in 2010. He was sentenced to 3 years in jail and 10 years of supervised release. After serving his sentence and 2 years into his supervised release…he was found with more child pornography. The judge…following a federal sentencing law…immediately sentenced him to 5 more years in prison. The problem is that he and his lawyer thought that this was a new crime and hence unless he was convicted beyond a reasonable doubt by a jury of his peers then he could not be re-sentenced to prison…since he completed his original sentence and was not released early on parole. The majority held that his constitutional right to a trial by jury was violated and ruled the sentencing law…or at least a portion of it, it is not clear in the  articles I saw…unconstitutional.

The other major case announced held that federal courts had no business in determining whether gerrymandering was legal or not…holding that both Democratic gerrymandering in MD and Republican in NC were constitutional under the rights granted to the states in the constitution. Gorsuch in this case voted with the other conservatives. Naturally…the media is all up in arms about this second one but is wholeheartedly applauding the first…small wonder, eh?

So…maybe all the scare stories in the media you read in the media are just a little over blown…since although they trumpet the unfairness and lockstep of Republican appointed judges every chance they get…actual case decisions get decided based on different things. Just last week…a case was reported out 7-2 including 2 of the liberal justices…and the conservative viewpoint carried the day in that case.

Ok…Thursday we headed off for a trip to the CA state capitol…we got there a couple minutes later for the 1100 tour we were aiming for as parking was…in a word…abysmal…but caught up to it at the first talking point stop on the tour…this was after we went through the practically a strip search admittance process…Neil used to work in the Pentagon and it’s easier to get in there than into this building.

The only really interesting point made on the tour…and while it sounds good I’m not entirely sure that this is true it does make for a good story…anyway the person who is shown on the CA state seal is the Roman god Minerva/Greek god Athena. In both cases…she was born as an adult from her father Jupiter/Zeus. When CA became a state…the requirement for a territory to apply for statehood was a minimum population of 60,000 people. California went from just a few thousand prior to the Gold Rush to having an increase of over 100,000 just in the year 1849…as such…they went directly from no official status to statehood, bypassing the traditional Territorial status…and hence CA was born as an adult state…thus mirroring Minerva/Athena…or so the story goes.

The state seal…showing Miverva/Athena, the Greek word eureka (I found it…referencing the gold discovery at Sutter’s Mill the previous year) and 31 stars since CA was the 31st state. 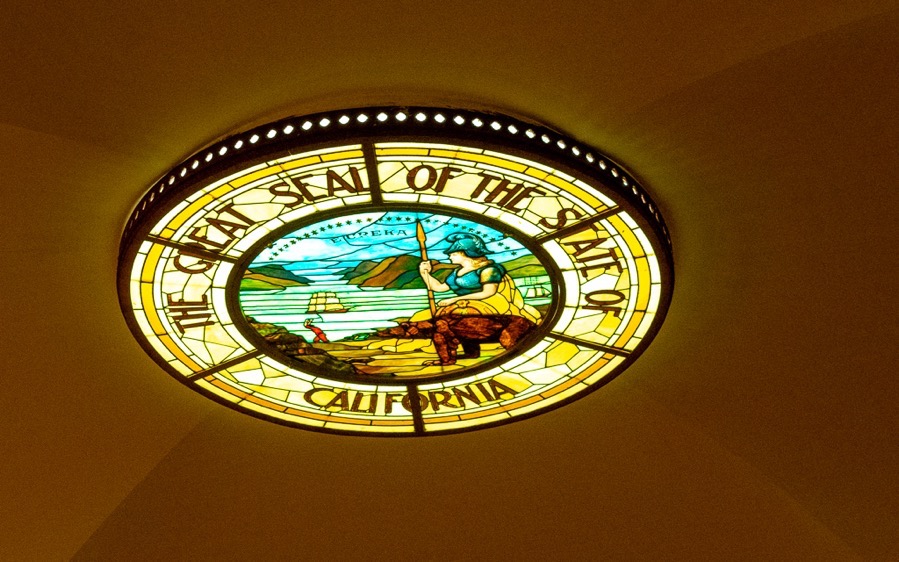 Senate chamber…decorated in royal red like the UK House of Lords as the upper house.

Assembly chamber…again decorated in agrarian green like the House of Commons or lower chamber in the UK.

Inner dome.Interestingly enough, it’s 90 feet below the cupola and outer dome in the exterior picture below…our tour guide…who looked about 12 despite claiming to have graduated from college…did not know why the interior and exterior domes were so far apart.

The California Bear symbol…although actually it was purchased…er, adopted…from Colorado by Governor ‘Ahnold” Schwarzenegger back in the early 2000s on the spur of the moment as the state symbol is the extinct California Grizzly bear…this isn’t a California Grizzly…and is in fact not even a grizzly at all…or even an actual bear…but rather some sort of stylized LSD trip artistic interpretation…looks more some wacky this-is-what-I-think-a-bear-should-look-like bear but definitely not a grizzly…but this is California so we have to make allowances I reckon. And trust me…Ima real bear…ifn ya wanna know what one of them bad boys looks like just scroll up…Ima right up there in the masthead. With the capitol staff…it is known as Bacteria Bear from al the people that touch it…and it has it’s own twitter account according to our 12 year tour guide…it tweets as @BacteriaBear but not very often.

Exterior shot…the interior dome is actually just barely visible between the columns above the portico…well at least the sky behind the columns is blocked out by the upper parts of the interior dome. Tours used to be allowed to climb the 90 foot steep stairs up to the cupola…but the Highway Patrol/State Police put a stop to that years ago for safety reasons.

This statue of…strangely enough…Columbus final appeal to Queen Isabella for funds to go and discover the New World…is located under the rotunda. It dates from the 1860s and was donated by a prominent Sacramento banker for the new Capitol Building in 1883. During the renovation in the 1970s it was temporarily relocated but was returned after work was complete as the citizenry determined over the objections various native people’s groups who claimed that Columbus never made it to California but his discovery of the New World ushered in an era of genocide, subjugation and colonialism of native peoples.

And that was our day. We stopped by Mackey D’s for lunch, Home Depot for a couple of items and were back home by 1400. Dinner will be Italian sausages with mushrooms, peppers and onions…we don’t have any buns so no sausage Sammies for us…we’ll have pasta of some sort with garlic and cheese instead.

I have posted this one before…but it’s getting into summer time and therefore yellow stripey thing season…so here’s a quick way to help you identify which ones are bad.