Day Trips Near (Sorta) Foster OR

We had a really great Independence Day…a bottle of wine, some carne asada on the grill, and some marionberry cobbler…the latter was really good…and we only ate about half of the serving we brought home from the other night…leaving the remaining for another night.

There has been another earthquake out here on the Left Coast…both in the 7 range…no worries for us as both were down in the LA area in the south of the DPRC…we didn’t even feel them as we’re 700 or 800 miles north. As long as the Yellowstone super volcano doesn’t go off in the next 3 or 4 weeks we’ll be just fine…it is overdue for an eruption based on historical averages but then that has been true for 75,000 years or so. There aren’t any major fires burning in the Pacific Northwest so far…again if we make it another 3-4 weeks we’ll be in Nebraska and pretty much out of fire country. One of our readers asked us if we were heading east yet so I figure I should update ya on that.

***We now return you to your regularly scheduled blog post***

Friday morning we had breakfast…cheese pastries we got the other day…and then headed out for some Fun Stuff©. Our first stop was the Fort Hoskins Historic Site…this is the remains…well actually there aren’t any actual remains remaining so it’s just the site where Fort Hoskins used to be. Fort Hoskins was established in the early 1800s to (a) protect settlers to the Oregon territory from the evil natives and (b) to keep the aforementioned evil natives on the reservation…there were a series of treaties between the US government and the local tribes over the years which (a) gradually reduced the land the Indians retained and (b) were all eventually torn up by the US government in order to provide more land for white settlers and take it away from the Redskins…as I’ve discussed before this is not one of the finest moments in our government’s history.

We spent an hour or so wandering the hiking path around the former fort site…although there’s really not much left…once the fort was abandoned in 1865 it fell into ruin and there is nothing left of it today.

There are the remains of a school that was built in 1915 and then abandoned in the 1950s. 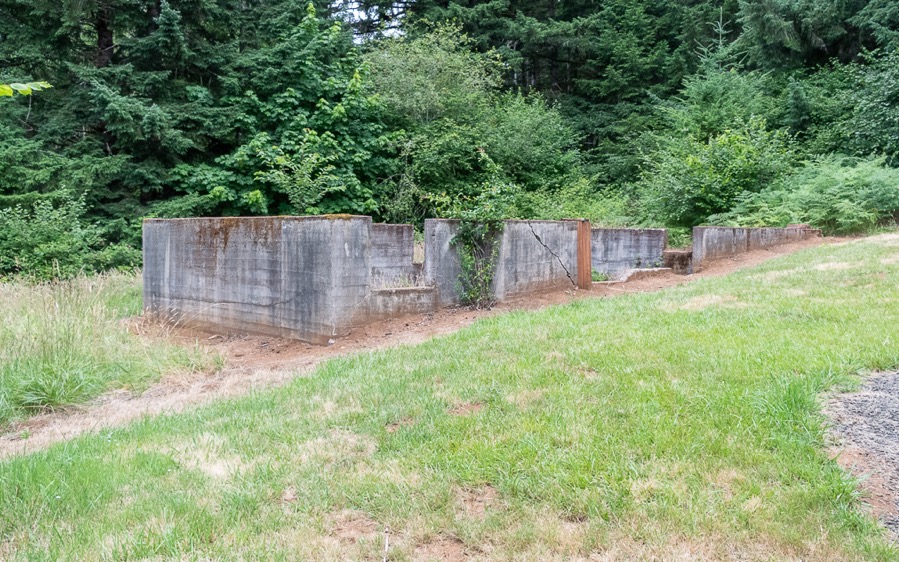 On our walk…we spotted this Red Breasted Sapsucker…a woodpecker variety…Neil tried to tell him “Dude…the chances of finding any bugs to eat in a creosoted telephone pole are zero.” He ignored that advice and kept drilling away. 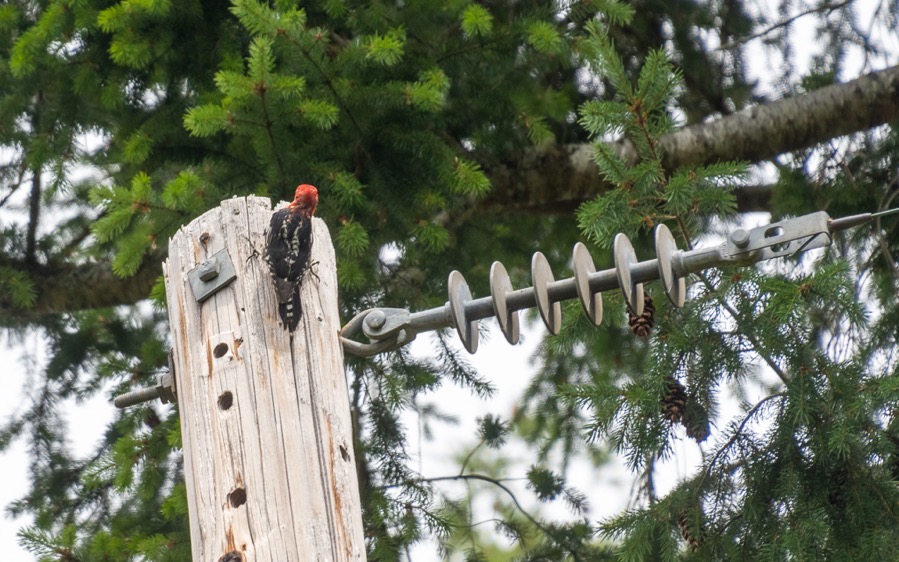 Nearby there were some Cedar Waxwings in the trees.

And Neil spotted this Yellow Spotted Millipede…Connie lost her watch (or so she thought…it was actually found on her nightstand next to the bed later)…and he redid the entire 0.6 mile hike looking for it…didn’t find it (since it was back at home in the rig) but he did spy the millipede…which his iPhone app Seek identified for him. 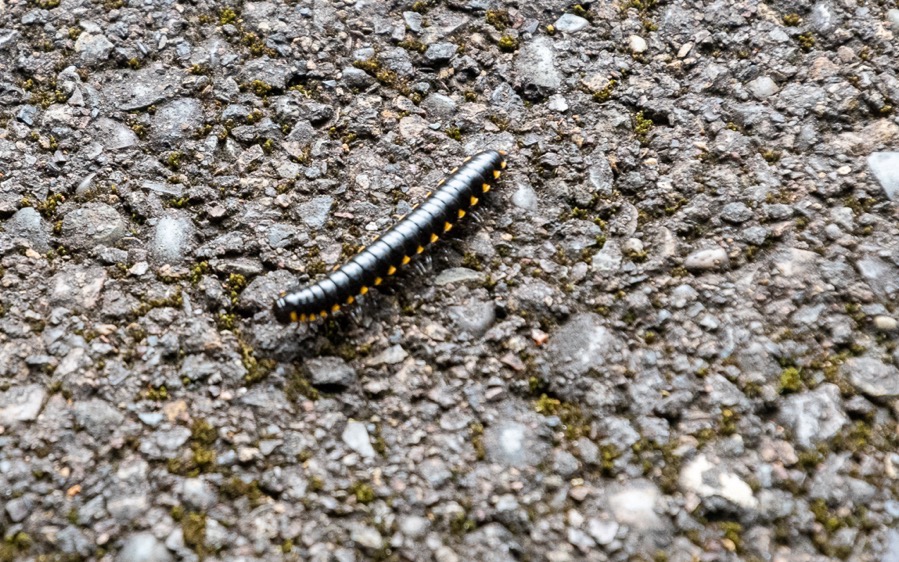 Next up was the Hayden covered bridge…which turned out to (a) be a reconstruction of the original early 1900s bridge from the 1980s, (b) not much of a photo op as you could not see the bridge itself except from the end, and (c) we decided the covered bridges out here aren’t nearly as interesting and photogenic as the ones up in the Northeast…we saw two of them today and they’re very similar in construction whereas the New England ones are much more individualized and have more character to them. 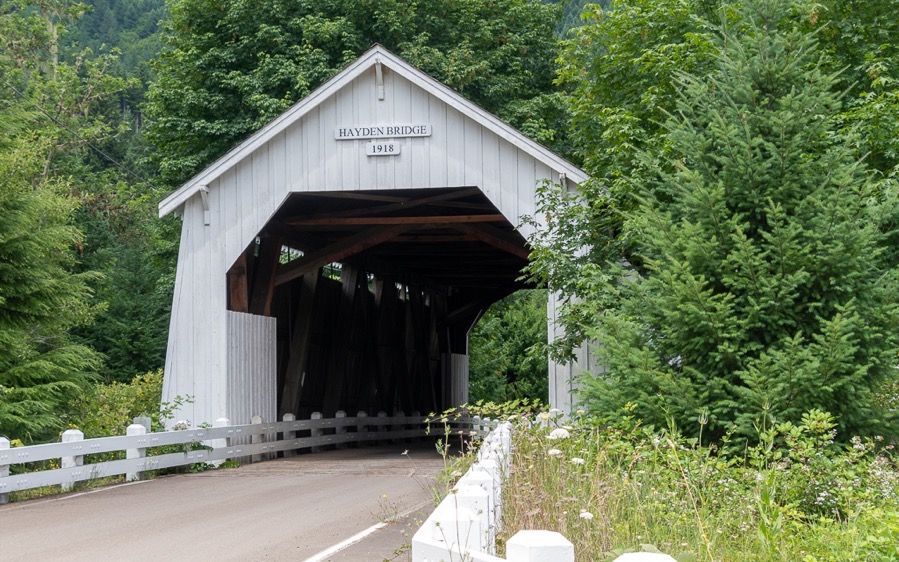 From there…we set off to visit Alsea Falls…this was an add-on to our original plan since Connie found it on the way…it was just a short hike from the parking lot…although there was a 9 mile drive down a banjo-worthy road to get to the parking lot…it wasn’t too tall, maybe 30 feet or so…but we all enjoyed it as it had a lot of character instead of just being a boring single drop.

Here are a few shots that Neil got with long exposures and his tripod to blur and make the flowing water stand out. 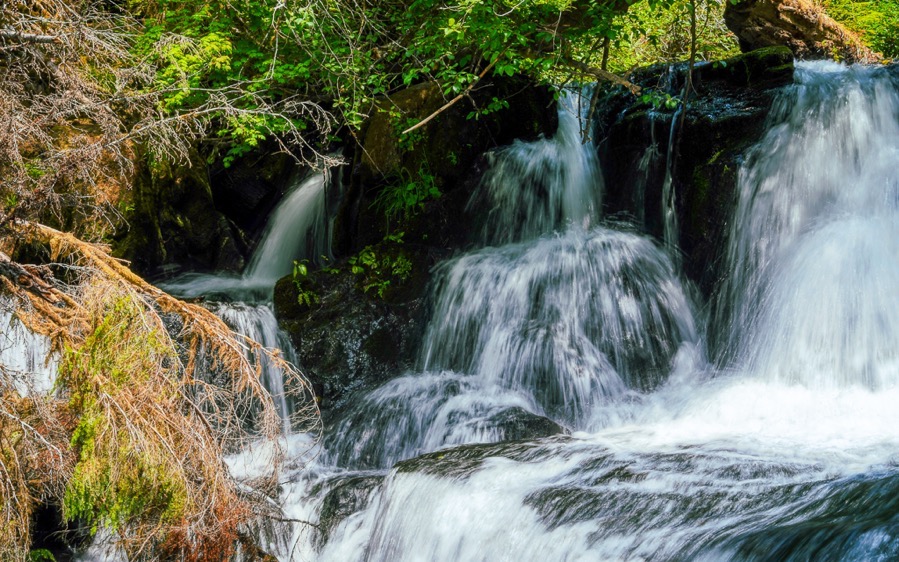 Connie got a couple with faster shutter speeds to freeze the water…both varieties are nice but Neil likes the flowing ones best. 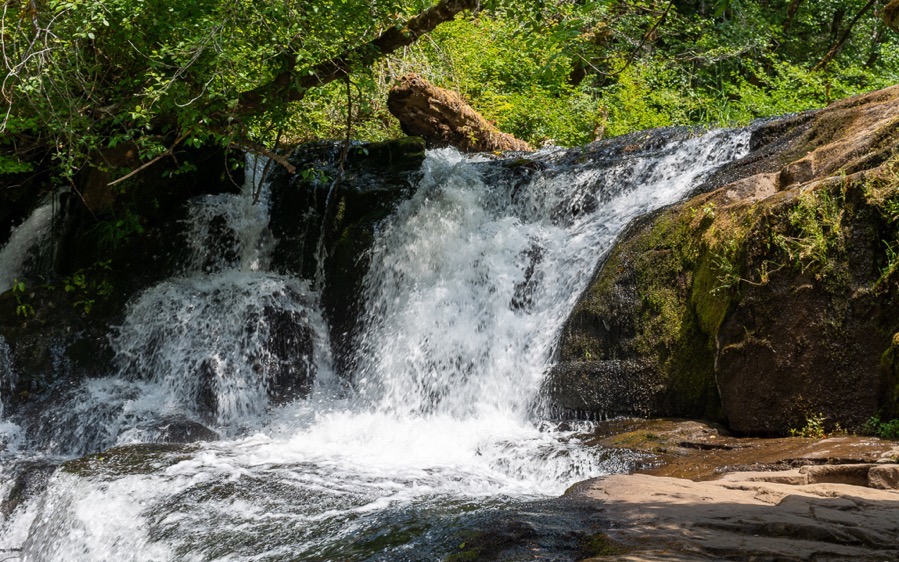 On the way back up from the waterfall…Connie spotted these cool flowers…they are known as Wall Lettuce…and are really small being only maybe 3/8 of an inch across the blossoms.

After that…we punched “Home James” into the GPS in Li’l Red…it routed us another 12 miles down the banjo-worthy road before eventually connecting up to some better roads and then back to Foster.

We had a shower since we smelled…then headed over to the local Elks Lodge 1972 for Happy Hour and dinner…fried chicken and we ended up with some leftovers for later.

Saturday…we left about 1300 for a day trip over to Newport OR to see Thor’s Hole and have dinner.

Speaking of Newport…and the other city names here in OR…the folks that settled this place either have no imagination whatsoever…or else they have no integrity for doing their own work…as almost all of the place names in the state were ripped off from someplace else.

Anyways…we decided on the way back home that while Thor’s Hole was decent as was dinner…neither was probably worth the 220 mile round trip drive down the curvy mountain roads over to the coast.

Basically…we headed pretty much due west from Foster, past where we were yesterday and than another 45 miles out to Newport…then 25 miles south on US-101 to Thor’s Hole.

This is what it looks look when it’s not quite high tide and when you’re standing back…lots of idiot tourists standing right on the edge. 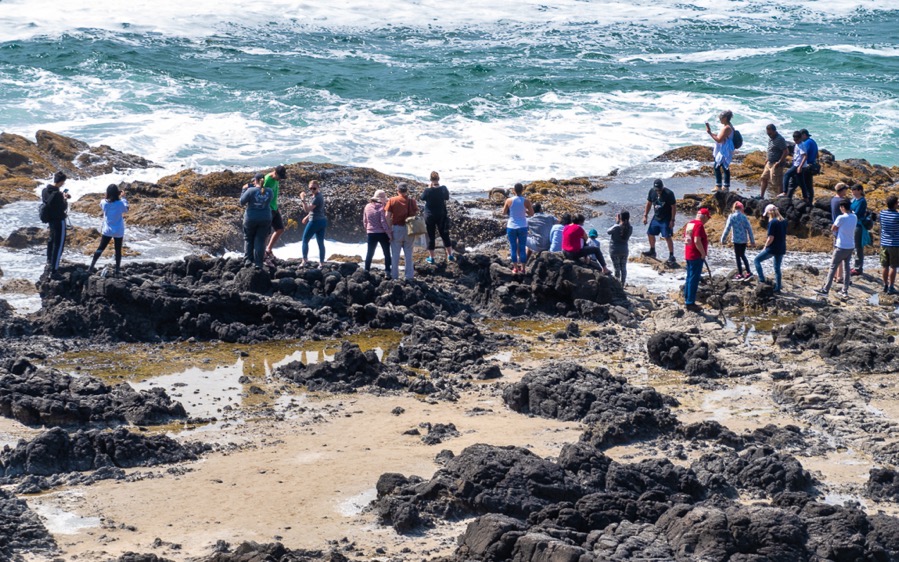 Some of the other nearby rocks. 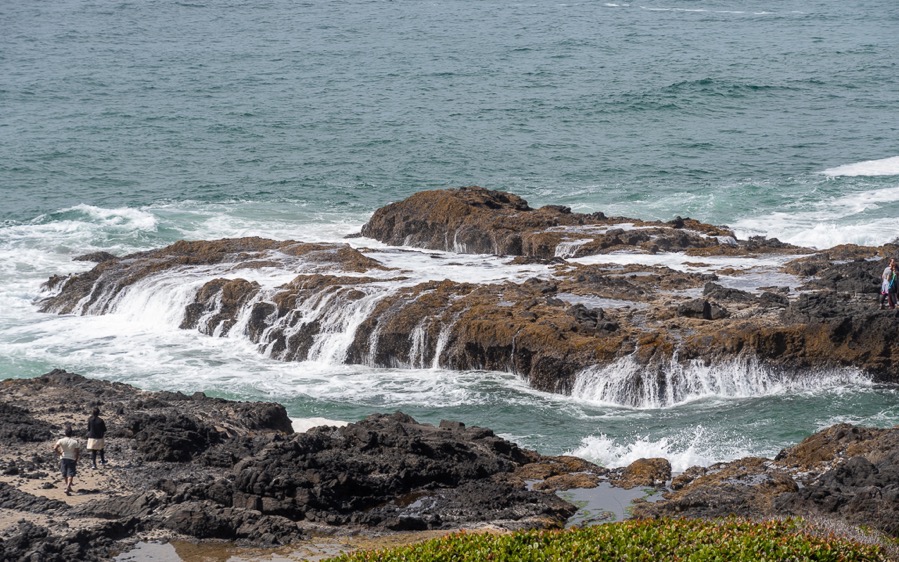 And these two are closeups of Thor’s Hole itself. You’re probably wondering just what in tarnation Thor’s Hole is…so’s Ima ‘bout to tell ya. What it is is a vital part of the earth’s crust that keeps the land from going under water at high tide. Ya know how your bathroom sink has that little overflow thingy at the top so’s when ya wander off in the middle of shaving…not that bears shave mind ya but ya’ll human critters do…at least Neil used to but not any more…anyways back to that little overflow hole thingy. Well…Thor’s Hole serves the exact same purpose. When it’s almost high tide like it is in these two photos…the waves periodically wash across the top and drain out the bottom. Since it isn’t quite high tide…the drain hole backs up a little…ya can see that in the second photo. In another hour or so…it will be full high tide…and the hole will be under about 2 feet of water…which will continually pour into the hole and down the drain so that the rising tide doesn’t drown the land. Simple eh?

Now don’t ask me where the water goes after it goes down the little…well actually big, about 20 feet across in this case…overflow hole thingy…I got no idea on that…but looking at it it’s pretty darned clear that is what is happening.

There’s a short video Neil took as well…you can view it here. The wave at the end almost got him…came to within just a couple of feet of where he was standing…so he headed back for higher ground.

We drove the 25 miles back to Newport and headed to Georgie’s Beachside Grill for dinner…Connie had a bowl of chowdah and Neil had a couple of sliders. Both were pretty decent and we washed them down with (respectively) a glass of Chardonnay and a Dark and Stormy. After that…it was about a 2 hour drive home…we stopped for a couple groceries at Walmart on the way and then filled Li’l Red up with gas for tomorrow and Monday’s Fun Stuff©.

Ya ‘member this pan or moon image from last time doncha? 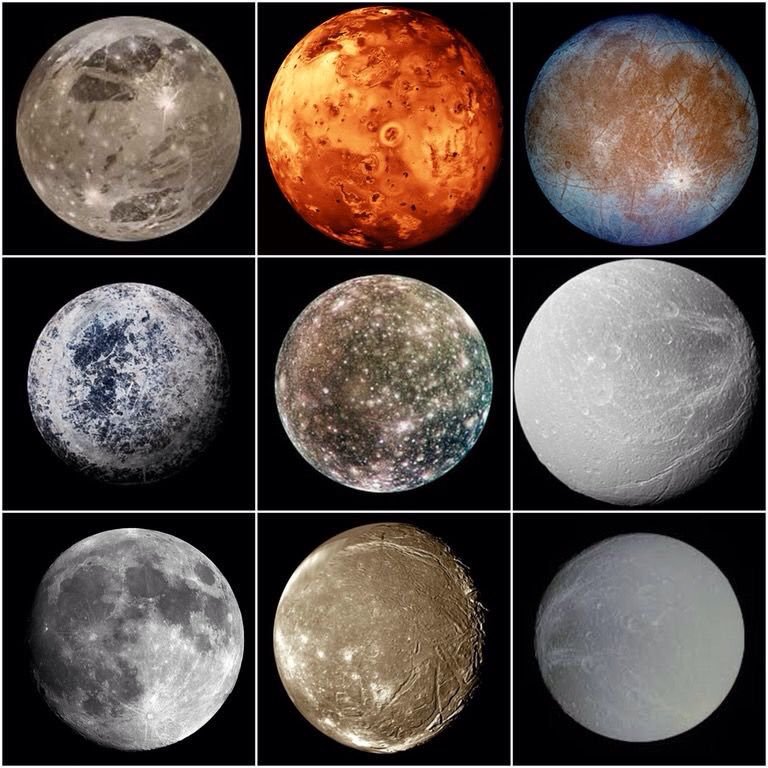 The frying pan is the middle one in the left column. Lower left is our moon…but that’s the only one I could identify for sure. I was fairly sure but not positive that middle left was the frying pan when I saw the original…and I think the lower middle is Europa. I can’t find where I got the original image again…googling frying pan or moon turns up a half dozen similar grids ranging from half frying pans to all but one being a frying pan…but where I found this one said that the other 8 were moons. Given some of the other photos though…Ima not real sure. 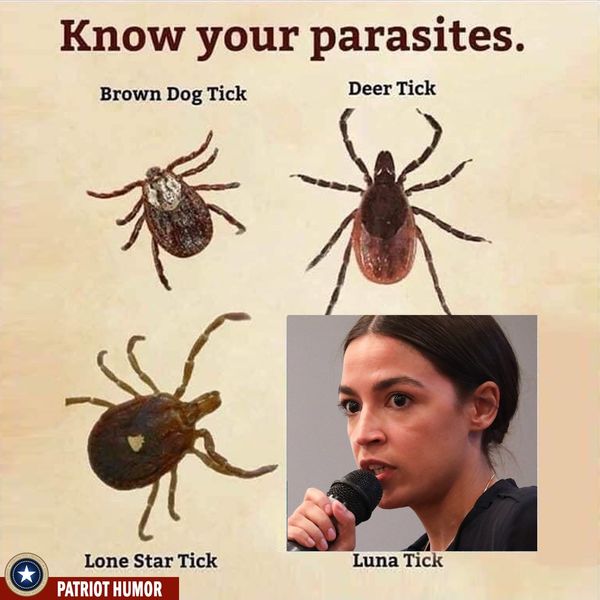 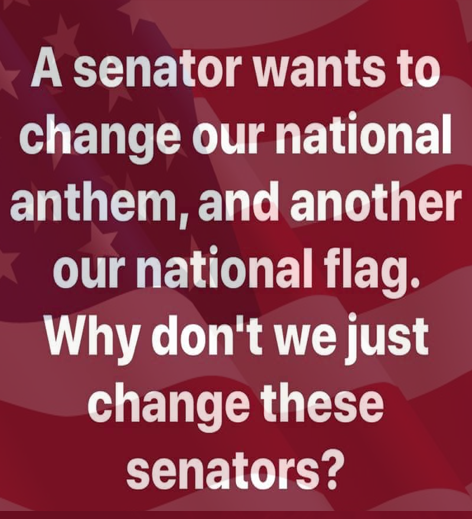 Connie does that genealogy stuff…but Neil doesn’t…he found this ‘splainer chart that will make all that once removed stuff make sense for ya. 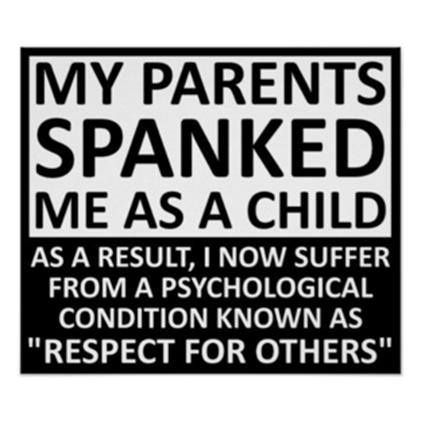