Shakin’ Up The Jello

The good news…is that we’ll have plenty of time here in Cody WY to explore northwest WY and spend some more time in Yellowstone National Park.

The bad news…is that we’ll have plenty of time here in Cody WY to explore northwest WY and spend some more time in Yellowstone National Park.

Neil explained to his assistant on the phone about our schedule and what had happened so far…she talked the doctor and his original recommendation was that since it was not causing pain and was not blocking anything we could just wait until we got back home and then get it taken care of unless we could stay here for a month to a month and a half. Neil said does that mean basically not get this treated until November…she had some more consultation with the doctor and he recommended getting it fixed now…waiting until November was longer than he felt comfortable with.

So…we set up an appointment for a consult visit with him for next Wednesday…yup, 9 days from now but that was the first appointment she had available (or at least the first one for something that he didn’t define as an emergency I guess).

With that in mind…we talked to the office staff here at Cody Trout Ranch and extended our stay through July 31…and they know and are comfortable with giving us a monthly rate for the site we’re in if needed after that…assuming we use the full 1.5 months after July 31 that will put us out of here about September 15…which means we’ll end up cancelling the remainder of the eastbound portion of US-50…but ya gotta do what ya gotta do. We went ahead and cancelled our reservations at campgrounds for our next two stops in Thermopolis and Douglas…and will cancel more as needed once we see the doctor next week and have more information.

So I guess we’ll plan on doing some fun stuff the remainder of this week and early next week.

The only thing we’ve done in the Fun Stuff© arena since my last post was last night’s visit to the Cody Night Rodeo. This is a professional rider nightly rodeo and it turned out to be a pretty great show…but it’s not up to the level we’ll expect to see next year at the Calgary Stampede.

After a dinner of grilled pork country ribs we headed off about 13 miles south from the campground to the rodeo grounds on the other side of Cody. The show started promptly at 2000 and ran for about 1 hour and 45 minutes.

Neil was actually amazed at how well these photos came out…since he needed to use ISO 12,800 for most of them as it was dark and he needed a high shutter speed to freeze the action. There’s a little grain and noise in them…but that’s to be expected for high ISO low light photography. 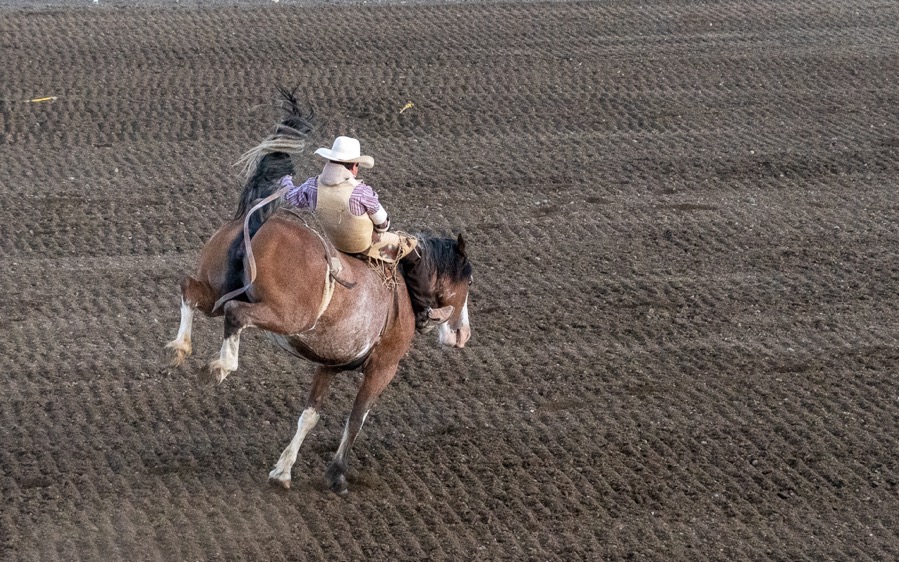 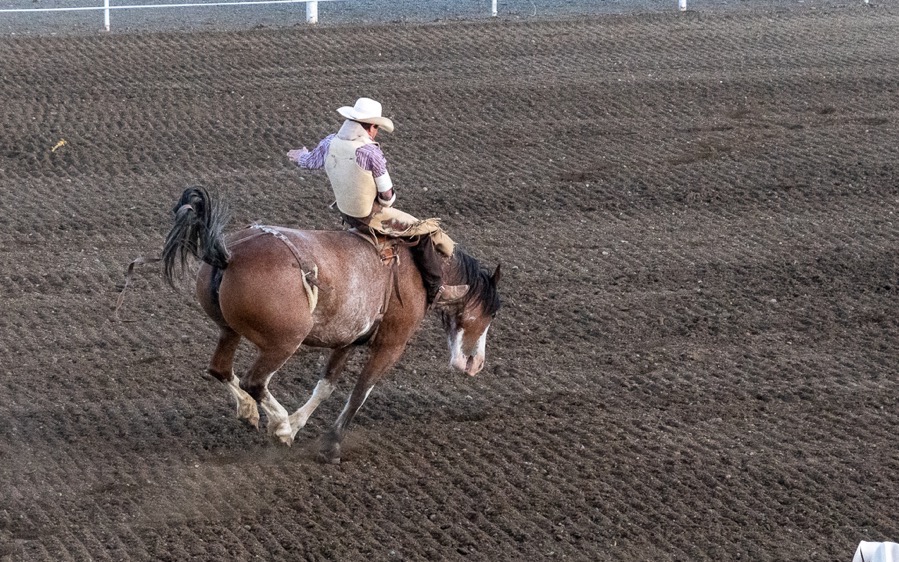 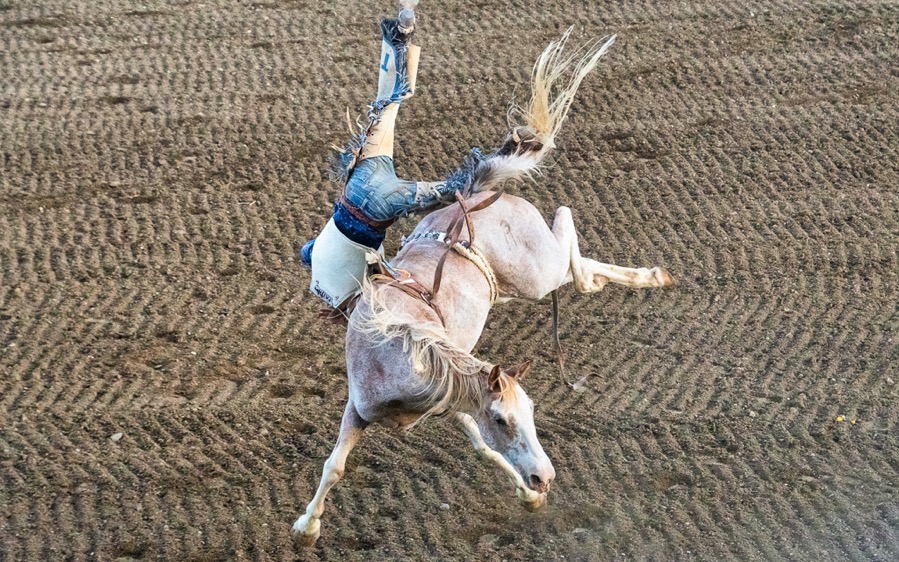 Every rodeo needs a clown and this guy was actually pretty funny and entertaining.

Calf roping…these horses are well trained and once the calf is roped and the cowboy jumps off it backs up to keep a strain on the lasso until he gets it on the ground and then stops and maintains tension while he ties the 4 legs together. 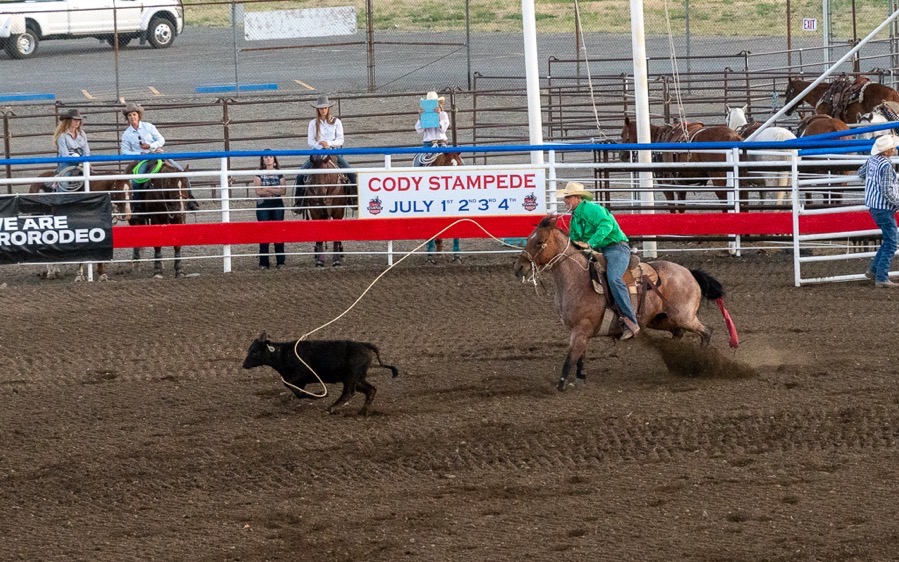 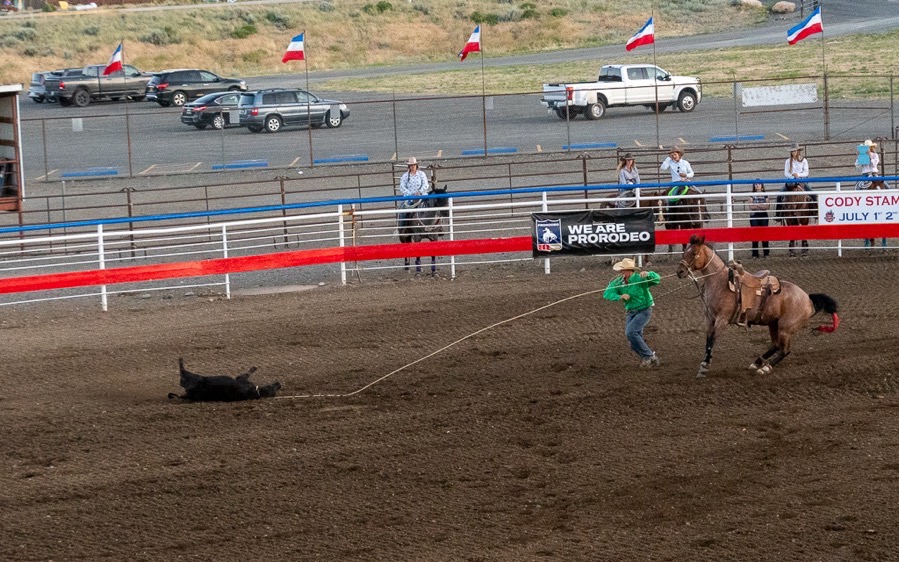 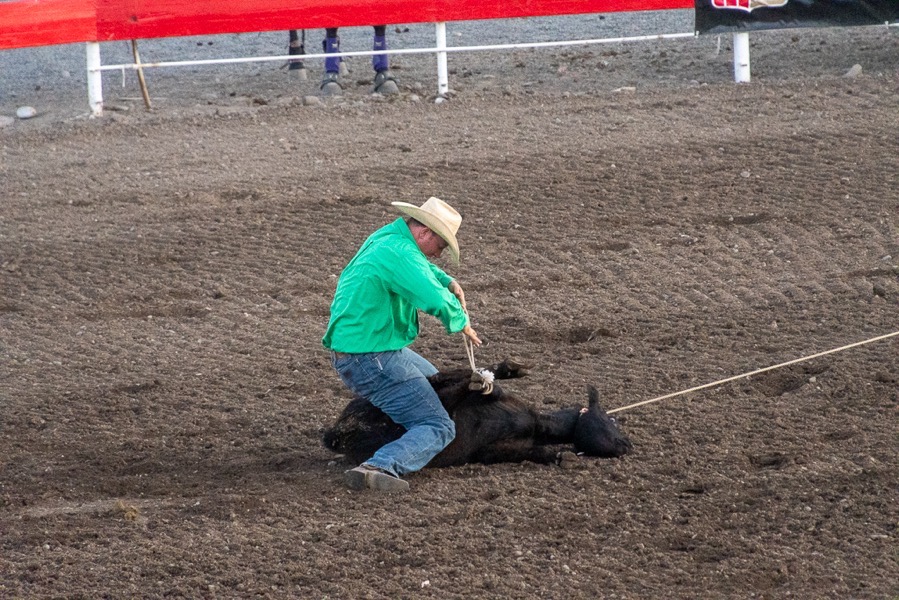 More bucking bronco riding…but this style uses saddles instead of being bare back. 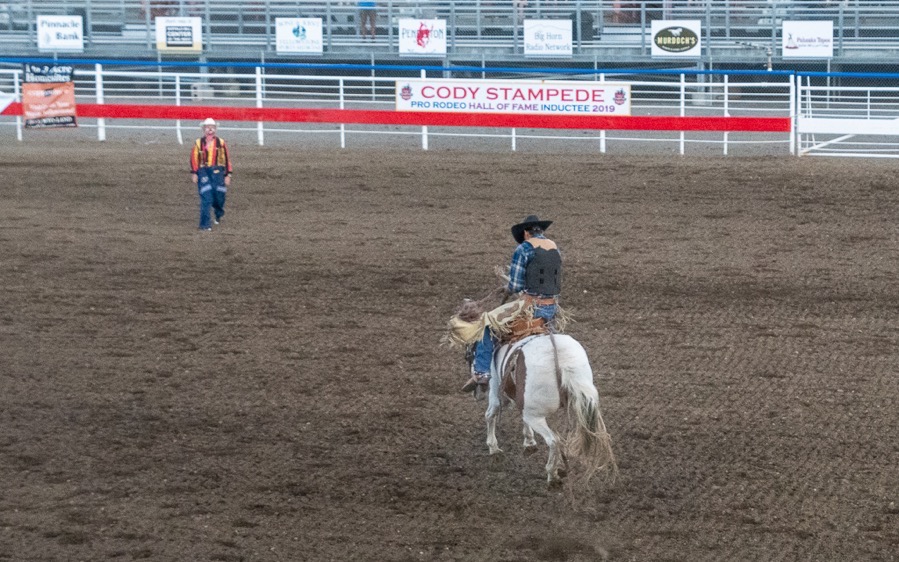 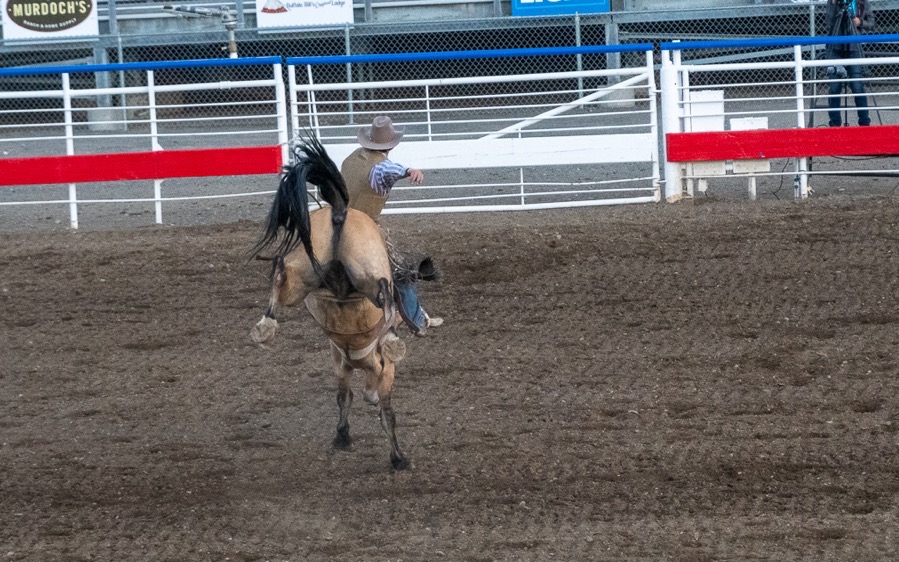 This cowboy was the winner of the event. 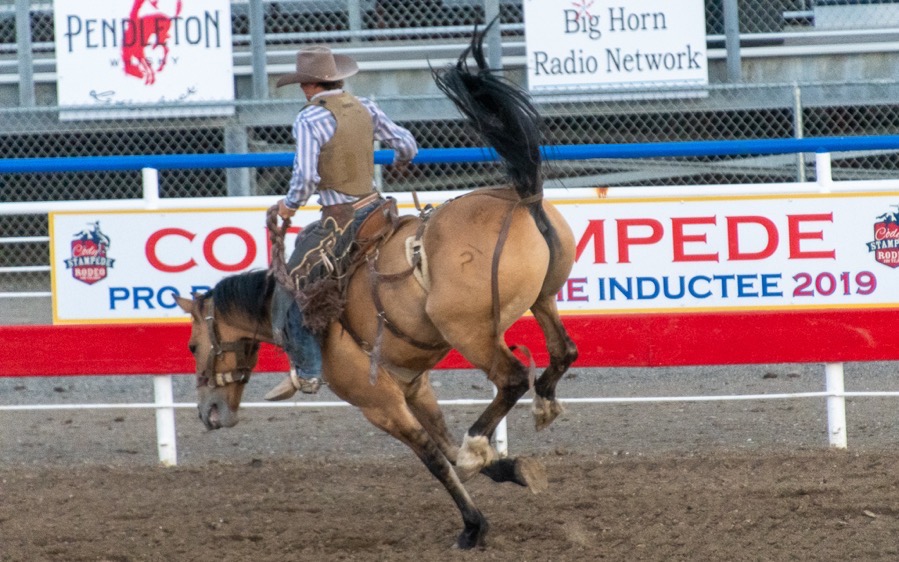 Barrel racing for the cowgirls…oops, she lost her hat. 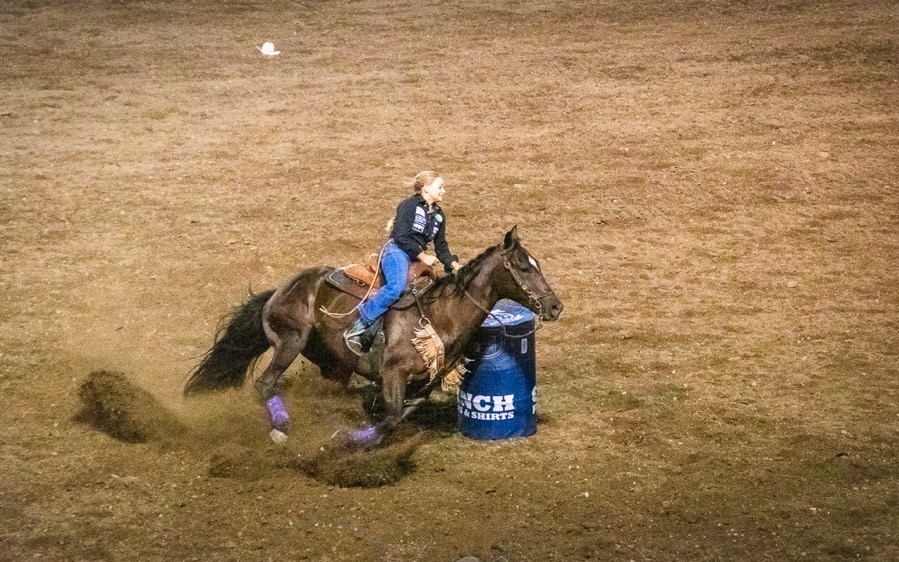 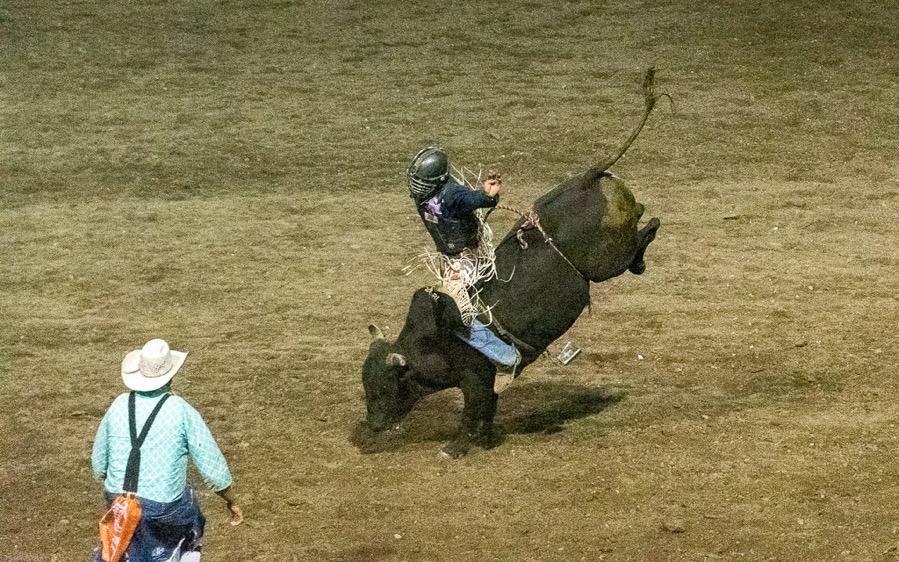 Needless to say…this one wasn’t the winner either. 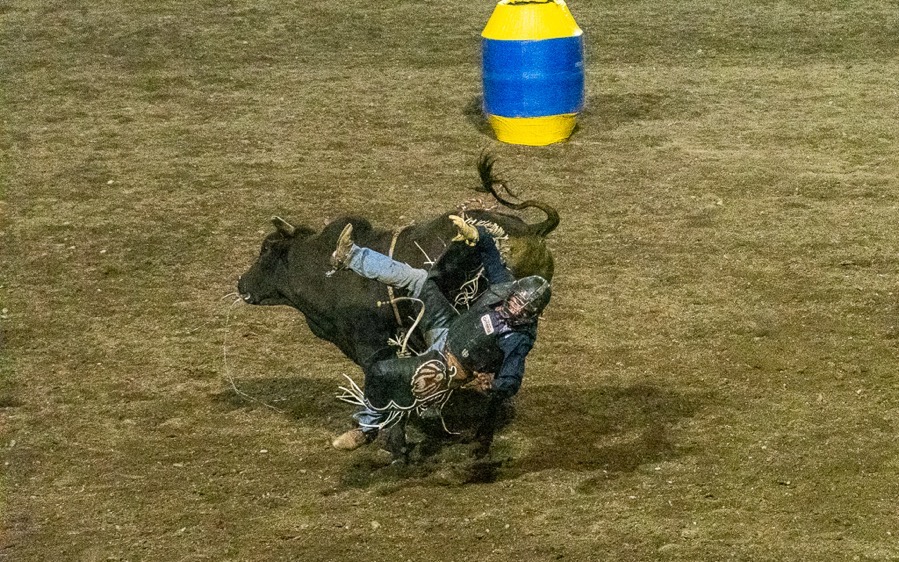 There was also junior steer riding…which involved a youngster riding a steer instead of a bull but otherwise it was like bull riding. There were 5 contestants…none stayed on longer than about 2-3 seconds and in fact 2 of them came off as the steer left the chute. The three that didn’t fall off immediately…one got stepped on after she fell 4 feet and landed on her back, another got kicked in the wrist as he fell off, and the third came off and face planted. They were protected by full face helmets, gloves, and flak jackets…but the age bracket looks like it ran from 6 up to about 10…after watching 3 of the 5 get hurt and then get up, stagger a few steps, fall, and repeat I wonder what those parents were thinking.

We would do it again…actually we will be doing it again since we’re doing a mini NHOG meetup at the Calgary Stampede next July.

6 Responses to Shakin’ Up The Jello