Before I get into today’s early morning walkabout…a little update on Neil’s kidney stone.

As expected after being released from care a week ago…he’s had no further issues with the kidney, no pain, and no more noticeable stone fragments passing so that’s all good.

He got a copy of his surgery report for both surgeries and the process is a whole lot more involved than he thought…if you’re squeamish about these sorts of things skip on ahead a few paragraphs to the line that starts with asterisks.

What he thought would happen was that they would slide the scope with the laser on it up past his bladder into the kidney and nuke the stone into dust. While that’s correct from an overall procedure standpoint there was a little more to it. The first procedure the doctor discovered that the ureter from bladder to kidney was too small for the scope…so he put in a stent (fancy word for a tube) in the ureter to stretch it a bit. This required a total of 4 different things from wires to scopes to stents being slid up there. The second procedure a week later involved insertion of a guide wire that the stent was then slid down and out over and then a total of another 6 different things going up with as many as 3 of them up there at one time. The laser involved is a 270 micron Holmium laser which is operated in pulses of varying length depending on the stone to break it into sub millimeter particles. Neil was unable to figure out why they use this particular type of laser or how it does its thing without cooking the inside of your kidney…but as a recovering engineer his best guess is that the short, low power pulses are absorbed by the stone and fracture it with the power being too low to pass through the stone. The laser itself is outside and the pulses are routed up through a fiber optic in the scope.

Way more than you wanted to know…but he thought it was interesting how much more complex it was in practice than in broad theory.

***** OK…those of you with squeamish tendencies can start reading again.

We headed out to the Paul Stock Nature Trail…about a 1.5 mile out and back with a lollipop loop at the end sort of trail and started out about 0830. Passed a few other early morning walkers and a young lady out running with her dog but otherwise pretty much had the trail to ourselves. It is located over on the north bank of the Shoshone River just outside of town.

Looking upriver and away from Cody…we eventually got down to the little green patch right at the bank that you can see on the far left. 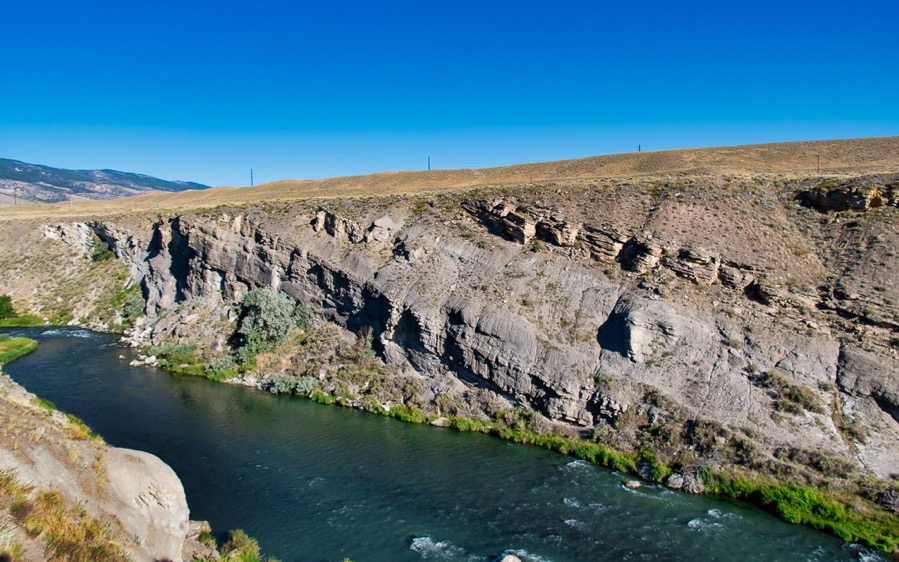 And downriver…you can see some of the industrial area outside of Cody in the back left. The bridge in the distance heads out towards the Chief Joseph Byway. 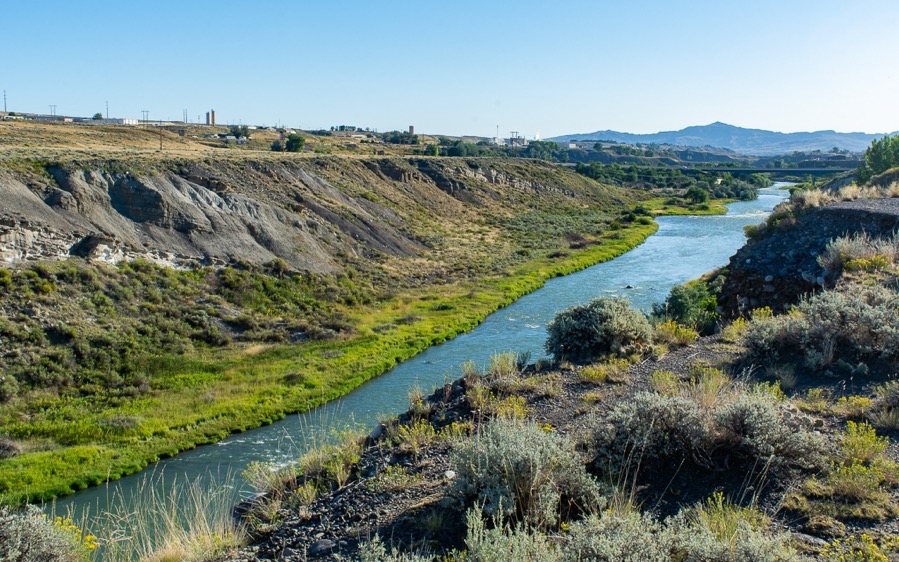 A shot of the nicely smoothed trail heading out…most of the hike was up on the canyon rim above the river but the lollipop part was down on the banks.

We spotted an osprey hunting breakfast out over the river…this is the best Neil could do without the bird lens along.

Looking back towards town just before we headed down to the river side.

Some sort of flowering tree…no idea what it might be…our super whamperdyne Seek app that is supposed to identify plants says it’s a member of the clematis family but nothing beyond that. Googling Clamatis and looking at the images reveals nothing like this…so it’s just some cool unidentified flower. 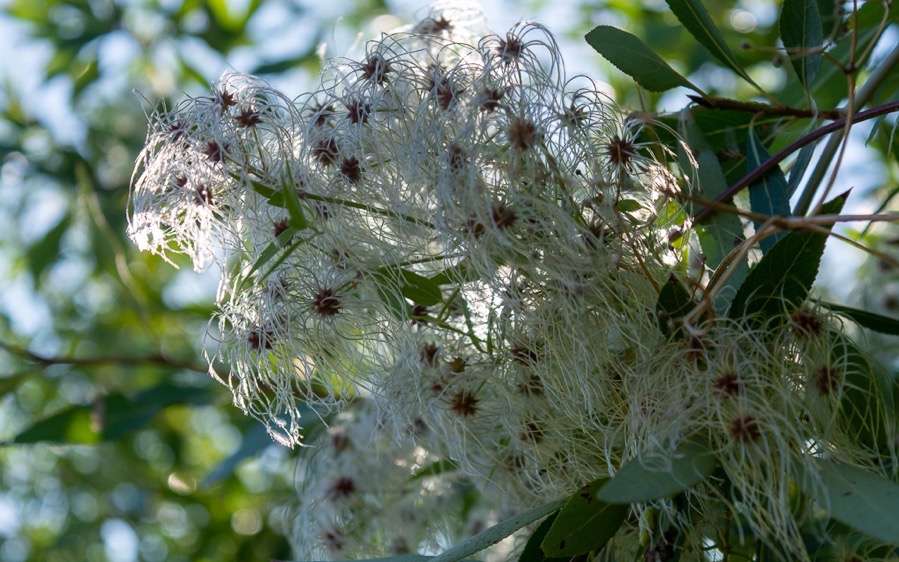 We spotted a Cedar Waxwing down by the river. 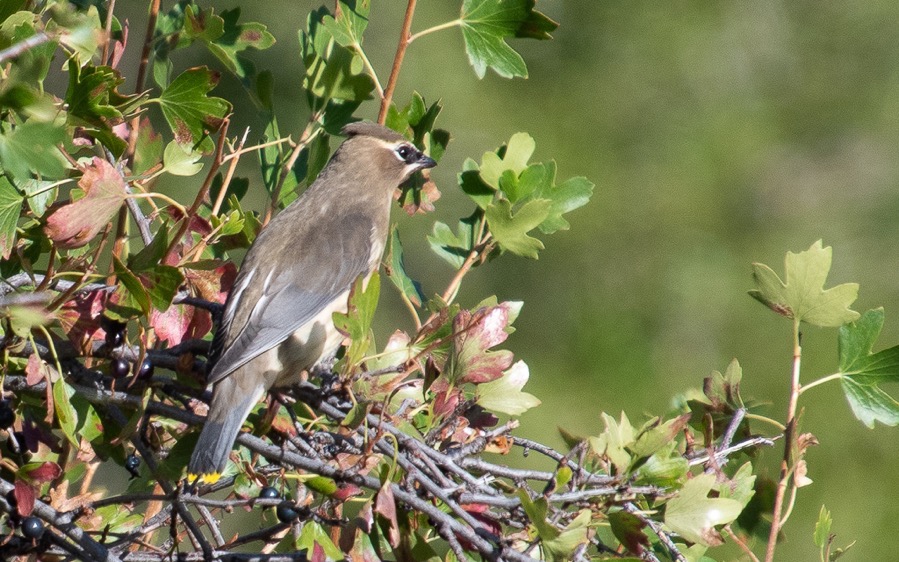 Along with a couple of Common Grackles.

Once we got back up from the river bank…across the way you can see the layered evidence that this whole area was once underwater.

Prickly pear that we spotted on the way back.

Shortly after that last shot…we got back to the parking lot. Stopped by the barber shop to get Neil’s ears lowered and then it was home for the rest of the day.

Did you know that the bubbles in champagne are basically…yeast farts?

No matter the species…children are always the same. 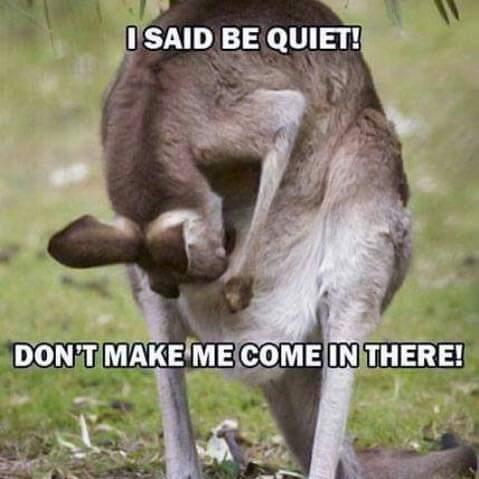 The shortest scientific paper ever published can be read about
here. The paper is titled…”The unsuccessful self-treatment of a case of ‘writer’s block’” and it is completely blank except for the Title, journal, and references. It was published in the Journal of Applied Behavioural Analysis in 1974. Conversely…I ran across another paper this week as well…located
here…this one set a record for the most number of co-authors at 5,154 of them. It was published by the folks at the Large Hadron Collider at CERN in Switzerland and reports on the mass of the Higgs Boson particle, nailing it down to +/- 0.25%. It was published in Physical Review Letters this past May…the paper is 33 pages long…of which 9 cover the research, conclusions, and references with the other 24 being needed to list all of the co-authors.

You remember how when we were growing up there were 9 planets…but then back around 1999 Pluto got demoted. Well…turns out that this happened because the IAU redefined what a planet was…it’s on wikipedia and I won’t bore you with all the details but essentially it needs to orbit the sun, have sufficient mass to have assumed a hydrostatic equilibrium (i.e., nearly round) shape, and that it has cleared the neighborhood of it’s orbit of other chunks of stuff. While that’s all well and good…and based on that definition Pluto is most definitely not a planet. However…strictly based on that definition…neither Earth, Mars, Jupiter or Neptune are planets either…since none of those 4 have “cleared the neighborhood of their orbit” of other celestial bodies.

Sounds like the IAU is just prejudiced against Pluto to me. It likely was formed either outside the solar system or from the collision of something inside the solar system since it has an orbital path inclined 17 degrees compared to the remaining planets and is more elliptical in orbit than other planets and actually comes inside of Neptune’s orbit. However…it most definitely meets the first two IAU planetary requirements but based on the neighborhood clearing criteria has as much right to the planet definition as those other 4.

And finally…they have these really, really high tech toilets in Japan. They include sound effects, bidet features, power deodorizing (whatever that is), and air drying capability in addition to the standard old toilet functions. This is a copy of the instructions posted on the inside of the stall door. Makes me like our 2 control (foot pedal and sprayer) model in the RV. 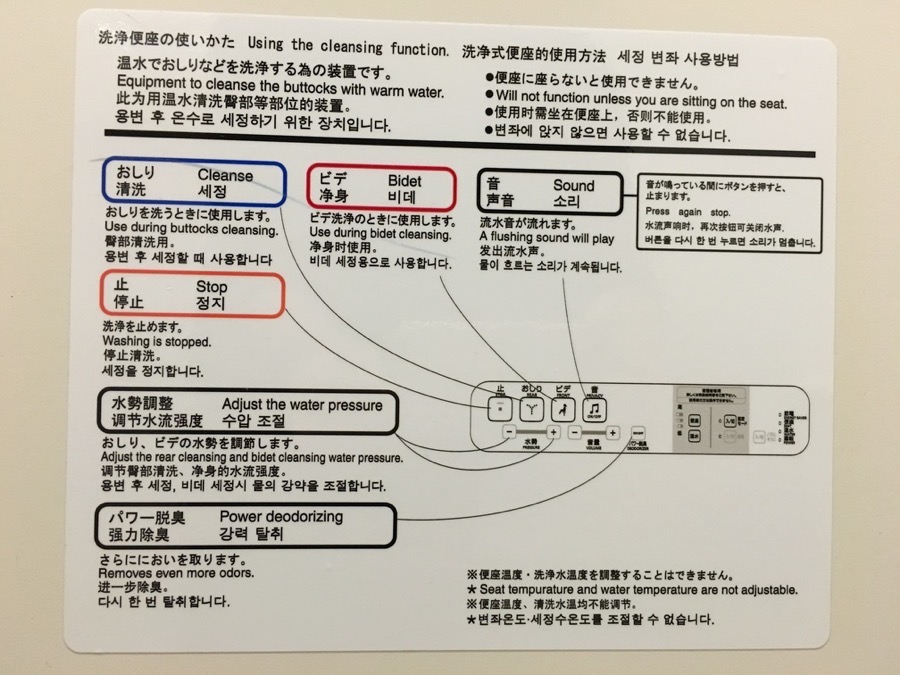 2 Responses to Hike Around Cody and Shoshone River Canyon