It Was Quicker Than I Thought

First up…congratulations to President-elect Biden…he won and although there will be some more ongoing court cases I don’t think they will change the outcome…the President will run into the same issue that Gore ran into years ago in that courts are unlikely to change the outcome.

So…what does the election mean? A few thoughts.

There’s no mandate or blue wave despite what you read in the news. Mr. Biden won the 4 swing states that gave him the 270 EC votes he needs by about 88,000 votes total with those states having about 15 million total votes cast…so he won those states by about 0.6%. While there’s been no final EC count yet due to several uncalled states…he will likely end up with 300-310 EC votes and the President about 230-240. I’m sure that the Democrats will declare the EC vote to be their mandate…but then this is the same EC that they have decried as being unfair and illegitimate for the past 4 years. Popular vote wise…he won by about 4 million with 150 million votes cast for a margin of 2.8% so even the meaningless popular vote doesn’t support mandate or wave claims.

The Democrats will end up losing 8 to 15 seats in the House and will most likely not take control of the Senate…so again…the predicted blue wave didn’t happen. There’s already a whole bunch of internal squabbling in the party over whose fault the results are…most centrist Democrats are blaming the progressive/liberal/Green New Deal crowd which I think is the primary cause but folks like AOC are claiming that it isn’t the progressives fault but rather the poor campaigns run by Democrats that lost.

What I really think is that overall the country really prefers divided government since the USA is mostly a center to center-right country. Having one party in complete control of legislature and executive would just give free reign to the nutcases in each party to implement policies that aren’t mostly center-ish. Control of the Senate in Republican hands will likely force Mr. Biden to have cabinet choices, legislative efforts, and judges that are a lot closer to center than Ms. Harris, Warren, and AOC will demand. That’s a good thing. Control of the Senate will also put the kibosh on idiotic ideas promoted by the far left like court packing and term limits for SCOTUS…which again is a good thing since it would just result in tit for tat counter idiotic ideas when next the Republicans are in charge…and it will also kill the statehood idea for Washington DC and Puerto Rico as those are just Senate packing ideas. DC doesn’t have the land area or tax base to realistically be a state…and Puerto Rico should be given the opportunity to become independent or a state if we’re going to make a decision on them; the referendum which barely passed only had statehood as an option. Me…I think it’s time to let Puerto Rico go independent much like the Philippines did…and rather than statehood for DC they should be assigned to MD as a congressional district and to MD (or VA to split the idea) for Senate voting. Originally, both VA and MD gave parts of their land to become DC…but the capital was only built on the MD side and the VA land returned to VA…that’ why the District is diamond shaped on the eastern side and river shaped on the western side. The issue is that the Constitution says that Senators and Representatives are assigned to states…so it would take a constitutional amendment to achieve this goal…and while amendments are deliberately hard to produce I think an amendment that did this would pass…because it is fair to the voters in DC but doesn’t really give either party a political advantage. It would put one more almost guaranteed House seat in the Democratic column but allowing them to vote for one of the Senate races in both MD and VA seems pretty fair and not politically advantageous to either side to me overall. However…this idea requires common sense and the ability to compromise which are both in scarce supply in our politics these days.

Mr. Biden said yesterday that it’s time to heal…in my idea he should issue a preemptive pardon to the President and should lean on NY to leave it alone as well…both in the interest of moving forward and in the interest of not having his entire term taken up by endless coverage of legal battles…especially as Mr. Biden has skeletons in his closet as well (Hunter Biden and Tara Reid for instance). At this point…it would be almost impossible to seat an unbiased jury for any proceedings against the President…because there aren’t any potential jurors who haven’t already made up their minds.

I wonder too whether Mr. Biden hasn’t just taken the progressives for a ride. After he clinched the nomination…he said and did a lot of things that sounded progressive…but Really wonder how much he actually believed and would do what he said. He could not have won the election without the support of the far left voters…so he needed to say whatever he needed to say to get them to come out and vote. However…throughout his time in the Senate and as VP…he has a reputation as a negotiator and bipartisan let’s get some of what both sides want…we won’t know until later but I personally think that he will be a lot more that way than the out there with the Green New Deal crowd.

Will he solve the corona? I know he’s made all these grandiose statements about what he will do…but by and large what he’s said he will do is pretty much what the current administration has already been doing…largely public health is more of a state responsibility. Whoever the President is…he can’t order a national mask mandate…it isn’t within his power. I grant you…he will sound a lot more presidential than his predecessor but I’m not convinced that anything material will change. The corona will be with us until (a) we get a vaccine, (b) we reach herd immunity, or (c) it runs through the susceptible population and dies out on it’s own as pandemics (Spanish flu, SARS, MERS, Ebola, et. al.) have in the past. That’s really what it will take…and none of the hand waving that “I’ll immediately solve this problem” means anything. What Republican control of the Senate means is that any relief stimulus bill will likely not include extreme bailouts for blue states that have mismanaged their finances and given far too many gold plated pension plans to their workers. I’m happy if NY and CA want to overspend their income and need to raise state taxes to support their welfare pyramids…but states who have been fiscally wiser like FL should not be punished by having our federal taxes bail them out…if NY is out of money then NY needs to raise state income tax or state income somehow.

One thing I believe will happen though. I think the Republicans will to the large extent give Mr. Biden the respect of the office that was so lacking from the other side the last 4 years. Decades ago…once a winner was declared the country got behind him and he was Our President…not the Republican’s or Democrat’s President. Sadly…and to our detriment that is no longer the case…and it seems the past 4 years have been the worst of it. It started during President Obama’s administration…but even though the other side was against him by and large they gave him the respect the office deserved. Round these parts…we will do just that until Mr. Biden demonstrates he is not worthy of it rather than de line to do just because.

We’re headed off to the Elks tonight for a wine tasting…essentially a nice food spread and a bunch of wine to sample. Most of our wine these days comes in a box…they have improved tremendously over the last decade or so and many of them are quite tasty and last a lot longer than a half consumed bottle does in the fridge.

Neil needs to take Li’l Red off to the Mazda dealer Monday for an oil change…we’ll be in the midst of Tropical Storm Eta being off the Florida Keys but here in North Fort Myers we’ll just see some rain (4-8 inches over Monday and Tuesday) and winds in the 30s with gusts to the upper 40s late Monday evening. Not much of a deal to us although those on the coast might see some localized storm surge as it passes. We’ll be fine we think…we’ll put our blow-around-able stuff from the lanai into the garage today, we have bottled water, a generator, gas for the generator, and plenty of toilet paper and food. From talking to our neighbors…during the past 2 hurricanes that actually made landfall near here in the last decade or so…there was no flooding at all and the neighborhood never lost power since all our lines are underground and the transmission lines aren’t really much susceptible to storm damage due to their height off the ground. It is the intermediate distribution lines that get trashed by falling trees and Magnolia Landing has it’s own substation directly from the feeder lines then underground in the neighborhood. We do need to run down and pick up a few groceries today though…although there’s nothing critical.

We did have a new visitor to the pond out back this week…as the weather has gotten colder up in the Arctic north of Jacksonville we have seen most of our old faves…2 of our 3 gators, Great Egret, Great Blue Heron, and Try-color or Louisiana Heron…but this week we had a female Anhinga. Anhinga are in the same family as cormorants are but are larger…about 15 pound turkey sized plus their neck which as you can see is long and snake like, very similar to the loon. Frequently when swimming Anhinga have their whole body submerged and just their head and neck out of the water. The fawn colored neck and breast is the female as compared to the all black male…both have the black and white checked wing pattern. 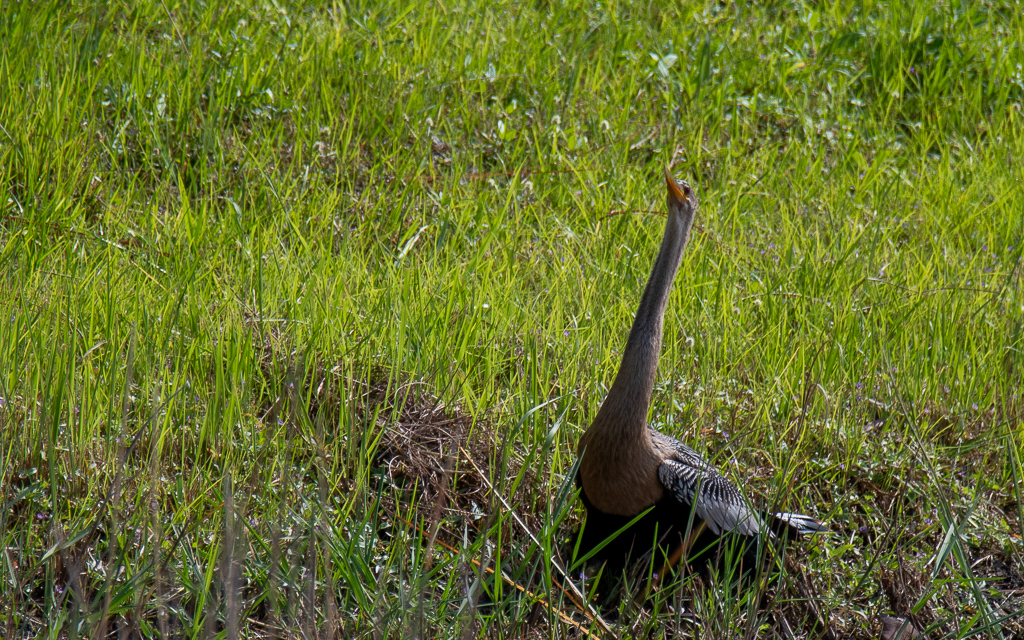 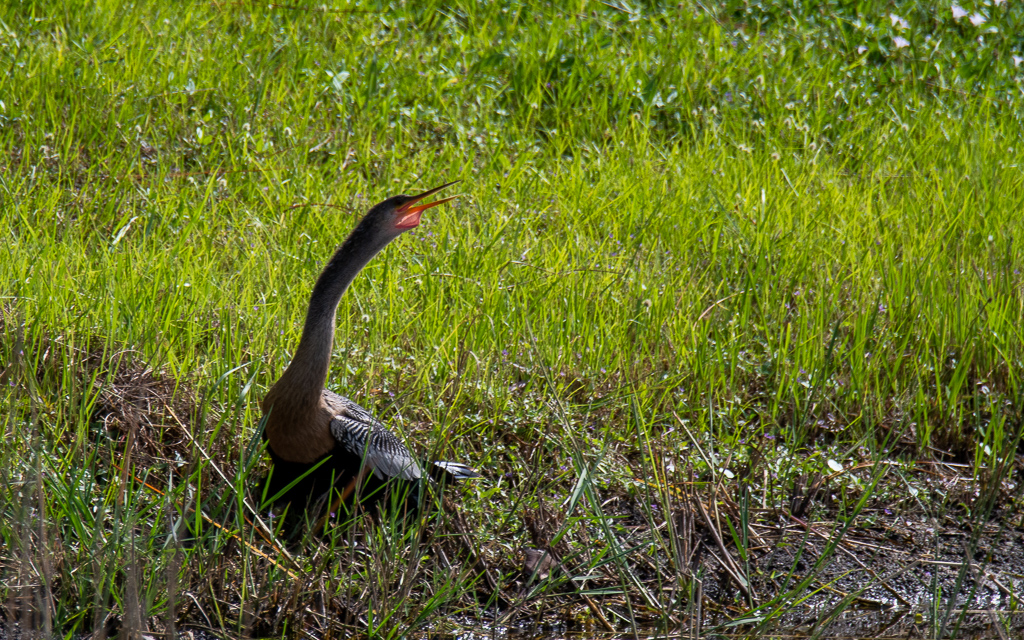 You may have seen the “World’s Largest Outdoor Cocktail Party” yesterday…this is the annual Georgia-Florida football game that is always played in Jacksonville. Anyways…Georgia lost…badly…which gives them 2 beat down losses for the year and likely puts Florida into the SEC championship game against Alabama in December. In recognition of the outcome of the game…

The Georgia coach is Kirby Smart…who used to be the defensive coordinator for Nick Saban at Alabama…and while he’s an outstanding defensive guy he really doesn’t know beans about offense and in our opinion doesn’t really know how to be the head coach either. 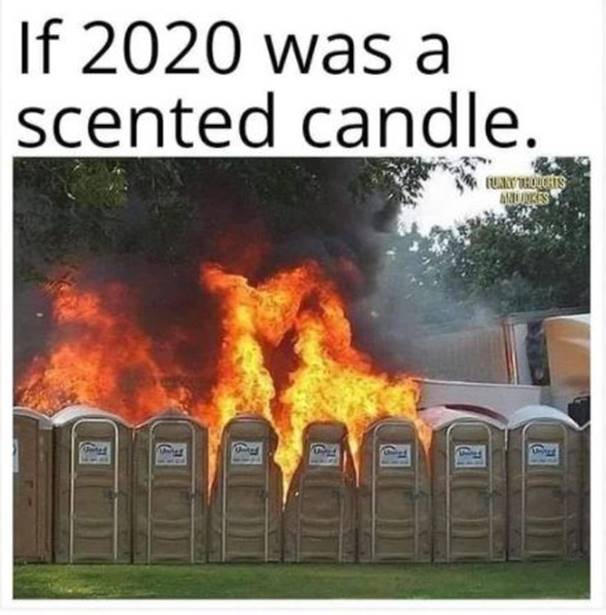 And finally…the best of the bunch so far…

The full time RV travels and experiences of Gunther the Bear and Kara the Dog…along with their human staff neil and Connie.
View all posts by Gunther →
This entry was posted in Homebody, Reality Based Blogging, Ya Can't Fix Stupid. Bookmark the permalink.