Once again…the post title pretty much says it all. 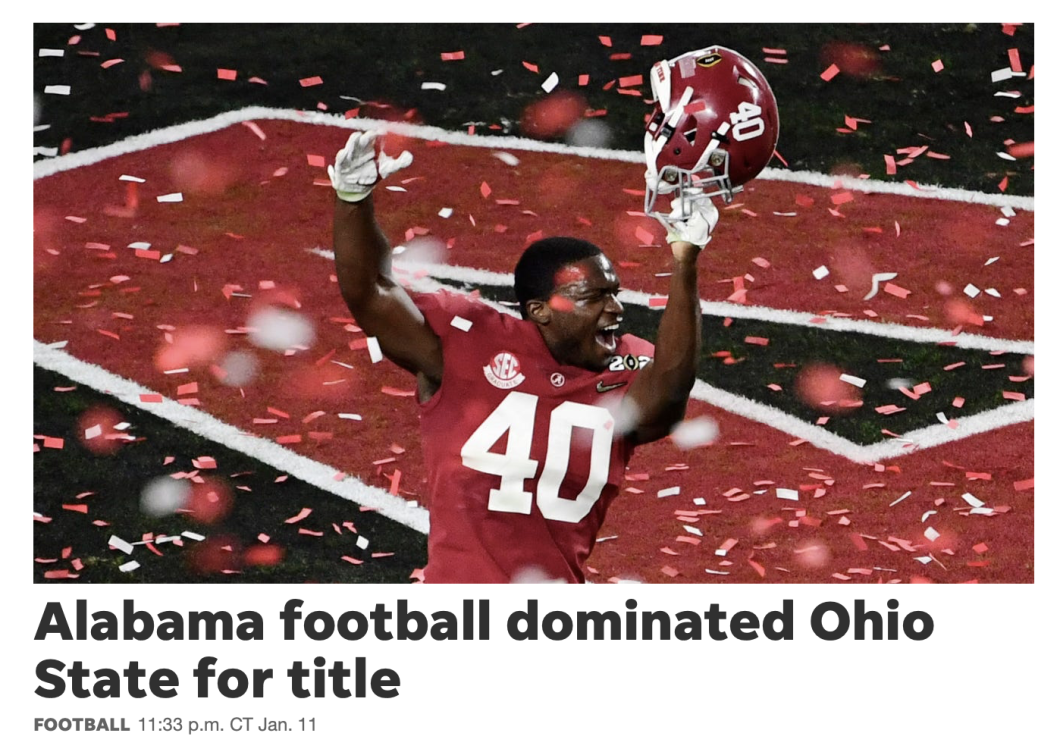 Last night ‘Bama and Ohio State met for the championship in Miami with the Tide being favored by 8 our 10 points. OSU’s quarterback had some cracked ribs from a targeting hit he took in the semi final against Clemson but it didn’t seem to affect his performance much as he passed accurately when he had the chance and ran the ball successfully a few times What did affect his performance was the dominance of the Tide’s defense…which was pretty dominant overall. OSU ran for 147 and passed for 194 on 17 of 33 passing but was only able to muster 2 long drives in the first half and they lost the time of possession 22 minutes to 37 minutes. Bama…with Mac Jones going 36 of 45 with 5 TD passes rolled up over 620 yards of total offense and pretty much dominated the game 52-24 and it was never close or in doubt after about the first 5 minutes of the second quarter.

After early scores by both Bama and OSU and another later in the quarter…we opened the 2nd quarter with a score and then 2 more before halftime. OSU only was able to get a field goal and a short TD drive of 20 yards after they recovered an uncharacteristic fumble on a strip sack…and they were down 35-17 at halftime. Heisman Trophy winner DeVonta Smith finished the first half with 12 catches, 215 yards, and 3 scores and didn’t play after the 2nd play of the second half due to a dislocated finger. Didn’t matter though…OSU lost the second half 7 to 17 and they were simply outmanned on the O-line and in the secondary.

The Tide now has 18 national championships…although one has to admit that some of the ones back in the Stone Age of the 20s and 30s are a bit sketchy as there was no real way to determine champions back then other than random papers or magazines declaring it so. Of those 18…Saban and the Bear have 13 of them. The NCAA credits them with only 16 though since they only count starting in the poll area which puts them in first place in that category…the NCAA counts Yale as having 18 but none in the poll era. Going back through the 23 seasons of the playoffs and the Bowl Championship Series that was the 2 team championship game that preceded the playoffs and started in 1998…

On the other hand…in the 7 years of the current playoff system they’ve been it 6 times and in the finals 5 times winning 3 of those giving Nick Saban his 7th championship which moves him into the all time lead over Bear Bryant and others…and he’s done it in a lot fewer years. He won his first at LSU and has picked up another 6 in 14 years with the Tide…and as he says it’s simply a matter of the teams following “the process”.

I’m not going to claim they don’t recruit highly rated folks but beyond talent he and his staff look for attitude. To do well for him…a player needs to not worry about stats or scores or sacks but to worry about doing his job each and every play to the best of his ability…and that the team and winning is what is important over individual stats…if you do that then a lot of good things follow. This years big 3 on offense…Smith, QB Jones, and RB Harris…all could have turned pro last year but each made the decision…as did numerous others…to return for their senior year and chase another trophy.

Those guys all have played their final college game…but the talent pool is deep with QB, RB, and WRs all in plentiful supply along with line and defensive folk…in fact next year’s D will probably be better as most of them should be returning and have more experience.

Connie’s off to a Ladies of Elks meeting this AM…Neil finished taking down the Christmas tree and decorations and got all them packed up…we’ll tote them up into the attic over the garage this afternoon when she’s back. We also had a great Date Nite last evening before the ball game…ribs and sides from Smokin’ Pit BBQ down Tamiami trail about 7 miles from home. Their BBQ is better than Hogbodies…but only a bit…and Hogbodies has wings as well so which we pick depends on exactly what we want to eat.

Cyas…off to do some more jobs round the house.