We took a short trip up to VA to see Alex and his parents this week and last…gone from home for 7 days.

It’s about 900 miles up there so going up we stopped overnight in Florence SC as it’s a bit over halfway and then got to our hotel in Midlothian mid-afternoon last Thursday. After checking in we had a short rest and a shower and then went over to the kid’s house for dinner which turned out to be pizza. Alex is still in school in the mornings so our original plan was to head over there after school was done for the day. It turned out that Bryan had an appointment he needed to go to so on Friday we showed up early enough for him to make that and watched Alex while he did school remotely…it was Field day so mostly they were doing various puzzles and exercises. After that…Bryan made waffles for dinner and then we headed back to the hotel.

By bedtime…it was clear that Neil had picked up a cold somewhere along the way…sore throat, aches and pains and sniffles. He took some drugs and wasn’t any better Saturday morning…but we headed over to the kid’s house for Alex’s class picnic at the park in their development…it was cold and windy so nobody really stayed very long and we got back to the house in the mid afternoon. For dinner…we headed over to a local Mexican place and had dinner before heading back to the hotel from the restaurant.

Sunday morning we changed our plans a bit…we would still leave Monday as planned but instead of going to Charleston SC for 2 nights as we had never seen Fort Sumter despite living there 6 years or so…and then heading back to Florida on Wednesday. The hotel we were going to be in was on the expensive side and we know from experience that dinner in Charleston downtown is expensive…and there would be another $60 for 2 ferry tickets out to the fort and back. With Neil feeling poorly…we would not have enjoyed the trip so we cancelled that reservation…gotta love hotels.com and their cancellation fee policy…and would head home on Monday.

We did stop by the Wegmans on the way to the kid’s house…bought a couple of duck breasts that just aren’t available down in Florida and also picked up some steaks as neither Neil or Connie wanted another dinner out…we needed some basic home cooked food at least one night. Bryan made a sautéed red potato and mushroom dish…which Neil decided to steal as it was pretty darned good…and Neil grilled some NY Strip steaks which we had along with a bottle of wine they also picked up at Wegmans…the kids don’t drink but a good steak really needs a good wine in our opinion.

By the time dinner was done and cleaned up it was Alex’s bedtime so we bid them adieu after Connie read a book to him and headed bak to the hotel.

Monday it was a repeat of the previous trip…up early and on the road with stops for food and gas. We overnighted in the Savannah GA area, ran out to a Longhorn Steakhouse nearby for dinner and then back to the hotel. By this time Neil was feeling somewhat better except for the aches and being tired so they were glad they had changed their plans…Fort Sumter will always be there on the next trip.

Tuesday we finished the drive home and got unpacked…then Neil did some pasta with scallops and bacon with a lemon wine sauce for dinner.

It’s been raining a lot lately…we’ve had over 4 inches in the 3+ days we’ve been back and over 11 for the last month…as a result our pond out back has filled up at least 2 to 3 feet. It was down almost as low as it got last summer but is back to full now. With the rain and the ongoing construction of new houses up in the front of Magnolia Landing…they’re doing the infrastructure layout for water, sewer, and electrical which necessitated a road closure on the main road in and an associated detour through a couple of the other side residential streets…a lot of the storm drains are temporarily blocked to keep construction debris out of them so there was 6 or 8 inches of water on the road as we drove back home from the Elks Lodge taco night on Thursday. It was better today (Friday) and looks like it will be less dreary over the weekend and into next week.

So…no pictures for ya this week…woulda had some from Fort Sumter if we had gone…but we didn’t so you don’t.

Interesting things found on the internet. 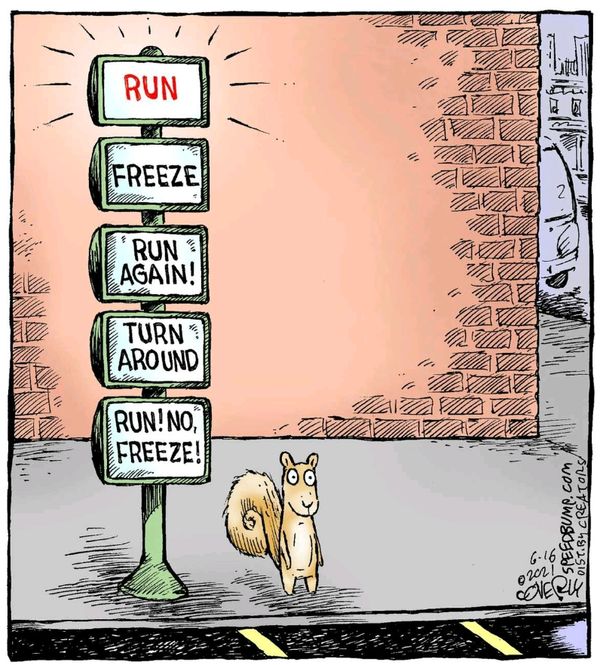 This one was from Neil’s photography forum…but it was in the non photo section.

The image could easily have a man with the kangaroo and it would still be funny. It did engender a bunch of comments from men on the forum that were along the lines of “gladly paid the price for the past 50 years and darn well worth it” as well as “when you find the one…never let her go”.

The full time RV travels and experiences of Gunther the Bear and Kara the Dog…along with their human staff neil and Connie.
View all posts by Gunther →
This entry was posted in Homebody, Travel. Bookmark the permalink.