Well, Thursday we got underway from Wolfs Den campground and headed over to Cape Cod. Breakdown, hookup, and travel went pretty well…we did have to pull over for emergency repairs to the Mazda just before hitting the Cape Cod Canal. The spray shield under the engine came loose and Neil ended up hillbilly engineering it with a tie wrap to hold it up until they could get it repaired. They ended up getting an appointment at Cape Code Mazda and the car will be ready to pickup tomorrow. Oil change, repair to the spray shield, replacing the clips that hold the bumper on (they discovered it was loose and was probably not properly repaired after the deer collision last fall) and would you believe it a mouse nest in the cabin air filter!. Connie is sure glad there (a) is not mouse and (b) that it didn’t come out and scare the daylights out of her while she was driving down the road.

We got over to Sweetwater Forest Campground in Brewster, MA pretty easily and are parked in site T2. Pretty nice campground with wide, easy to back into sites. No satellite TV due to the tree cover but we have cable from the campground and over the air signals from the Boston area as well. We originally paid $324 for 7 nights of 50 amp full hookup (FHU) but discovered that the 50 amp circuit has an issue preventing it from actually being used. The power management system sees low voltage (103 vs the normal 120) and shuts the power off. We ended up using the 50 amp to 30 amp adapter and that line works fine. Since the weather is cool and dry we don’t really need air conditioning anyway so 30 amp is plenty of power. The campground owner credited us 2 nights ($104) for the inconvenience so we ended up paying $220 for 7 nights on Cape Cod…about the best deal one can get in this area. We would stay here again. 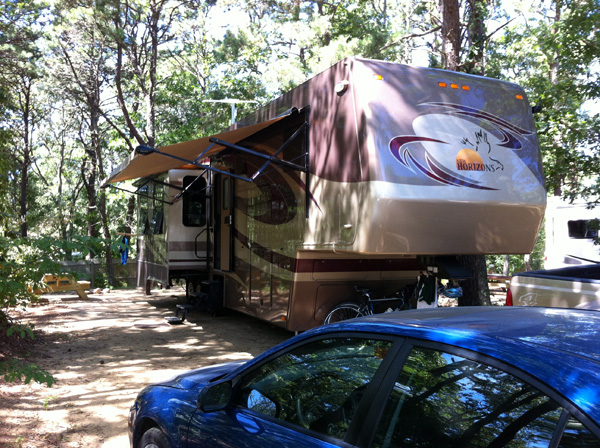 Thursday evening we ate at the Lost Dog Pub…food was really good there, the Guinness was cold and the crowd friendly.

Friday we went kayaking in the salt marsh at Cape Cod National Seashore. Had a good paddle of about 4 miles but came back earlier than we expected as the current was a lot worse than anticipated and it seemed like we were always going upstream. The marsh probably averaged 18 inches deep and in a lot of places was 8-10 inches so it was a fairly difficult paddle. Sorry no pictures as it was too rough to get the iPhones out. We’re going to buy a Panasonic Lumix TS4 waterproof point and shoot camera for carrying with us everywhere and when the real camera might get wet…that will let us get better photos in ad hoc situations than the iPhone does. Although the iPhone is really good for a phone camera…it’s still a phone camera and has no optical zoom or exposure controls for taking more than just a snapshot.

Saturday we rode our bikes to the beach nearby at Breakwater Beach in Brewster, Mass. This is on the bay side of the peninsula so it was a little more sheltered from the wind although it was still pretty windy. The water was very cold so we only dipped our toes a bit. Laid on the beach awhile, ate lunch, then rode our bikes back home after stopping by a farm stand and getting some apples. Saturday evening there was a picnic at the RV park; Neil made a Waldorf Salad and they went over and ate burgers, chili, beer, and cake. After that they came back home and watched Alabama (God’s Team) crush Michigan at football 41-14…starting off right where last year’s National Championship team left off.

Sunday we drove around Cape Cod and took in a bunch of the sights. We visited Marconi Station where Guglielmo Marconi built his wireless station that sent and received the first trans Atlantic signals. Not much is left as the station was abandoned right before WWI…the equipment was salvaged for use elsewhere due to security concerns about the German Navy and the buildings were abandoned. The beach cliffs where the transmitter was have continued to erode over the years and there is little of the original installation left. We did get a couple of pictures of one of the tower foundations and the area that used to have the antenna on it. There’s a little display model in the shelter in the picture and the antenna site was on the left on the off shore side of where the shelter is.

We also ate a lobstah roll at Arnolds…according to Yankee Magazine it’s the second best one in the Northeast. It was decent but not outstanding. We stopped at the Eastham Windmill on the way back; it was built in 1680 and is the oldest windmill on Cape Cod. Originally used for grinding corn into flour and was in use up until the early 1900’s before being abandoned.

Monday was Labor Day so in anticipation of many crowds we stayed home. Neil had a nice long bike ride on the bike path then we wandered down to the lake and had lunch. After an early dinner of steak and corn on the cob we headed off to the Wellfleet Drive-In theater…haven’t been to one of those in years so it was double feature time. We watched Moonrise Kingdom which had Bill Murray and Bruce Willis in it but was terrible. Next was The Candidate which was funny in places but was only slightly better than terrible. The popcorn was good and the company outstanding but the entertainment was sort of lacking. Still, a successful evening overall.

Tuesday we dropped the Mazda off to be fixed and drove up to Provincetown which is at the very end of Cape Cod. On the way we stopped and ate breakfast at Ruggies which is supposed to be the best breakfast on the Cape. Pretty good grub; and only about $20 with the top. Home made sausage, eggs and French Toast with a couple cups of pretty decent coffee. Arriving in Proivincetown we hiked a mile across the breakwater than along the beach for another mile and a half to Long Point Light. It was raining a bit when we started across the breakwater but stopped after awhile and the remainder of the hike (although it was pretty long and strenuous) was in the dry. The mile or so across the breakwater consisted of a lot of hopping from rock to rock and trying not to fall into the cracks. Connie was really scared going across. We happened across a Great Blue Heron on the way across…sorry about the lower quality iPhone picture but it was still raining too much to get the real camera out.

On the way back we saw a bunch of Great Skuas. This is a gull like but larger shore bird and we’re in the southern end of it’s range. We’ve been seeing them ever since we arrived in Connecticut and finally figured out what they were. 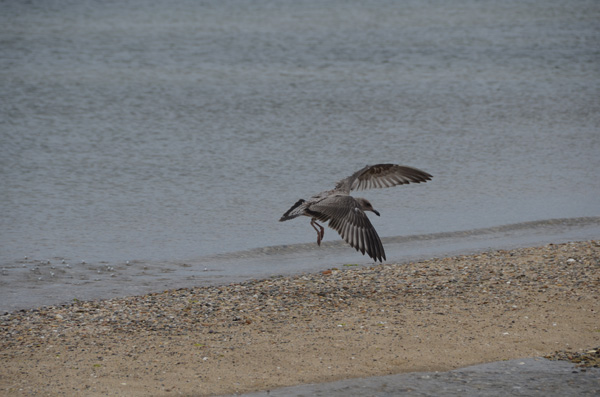 By then the tide was getting pretty close to high and we had to detour slightly a couple of times around areas that were dry on the way out. Connie was a little happier about the breakwater trek back as the rocks had dried out and she was only scared in a couple of places. Total hike was almost 5 miles but given the difficulty of the breakwater and the soft beach sand it felt more like 7 or 8. We were so glad to get back to BAT and head back home.

Heading home we stopped and bought some fresh Halibut for dinner…Connie had found a recipe awhile back with mayo, sour cream, onions and peppers and a cracker crumb topping that turned out really good. They had an apple, goat cheese and pecan salad with a mustard, honey and lime juice vinaigrette dressing. Both were really yummy.

Today it’s raining so Connie will do some work and Neil will go on a run. Dinner is another pub run (albeit to a different pub) then tomorrow we head off to Boston for a 5 night stay at the Hanscom Air Force Base Family Campground. Nothing major is planned for this stop…laundry, clean the rig, mount the new phone booster antenna and other minor household chores like that are planned. We will go into Boston one day for lunch and some touristy stuff but haven’t decided when yet.