YEA!. We’re here in Knoxville and the weather is finally warm. We headed out from Christianburg, VA on Tuesday morning and got here to the Escapees (sometimes abbreviated SKP as a phonetic abbreviation) Racoon Valley RV Park in Knoxville, TN. We got here about 5 minutes before they reopened after lunch and after waiting a couple of minutes got settled into site 14; a nice pull through 50 Amp FHU site. The sites are a bit tight but for 16 bucks a night you can’t go wrong.

Escapees is the original RV club founded back in the ’60’s by a couple of RVers. The name came from the fact that back in those days most full time RVers were escaping from all the pressures of job/house/life and living a more carefree existence on the road. It’s grown to over a half million members and is a great club to be in. They provide a mailing service that we don’t use, have a bunch of parks that are restricted to members at pretty cheap rates, and even have a facility down in Texas where RVers who have surgery or need custodial care for some reason can remain living in their RV and get as much support as they need up to and including all meals delivered, rig cleaned, taxi service to doctor appointments and the like.

Tuesday after arriving we met Mary Jane and her daughter Lauren for dinner at Ruby Tuesday’s then our energy fizzled out so we came home and went to bed. Wednesday we got up and were meeting them for dinner at her house again but during the way went on a hike over to the River Bluff Trail at Lake Norris State Park. The park contains a large lake held back by a 300 foot or so tall dam that generates power for the Tennessee Valley Authority (TVA) and provides boating, fishing, and water recreation along it’s banks. Downstream is the Clinch River and we went on a 3.5 mile hike up along the bluff then back upstream along the river to the parking lot. Here are a couple of shots of our return walk along the river…nice foliage as you can see. We watched a couple of boats fly fishing instead of standing on the bottom…most be too deep for that. 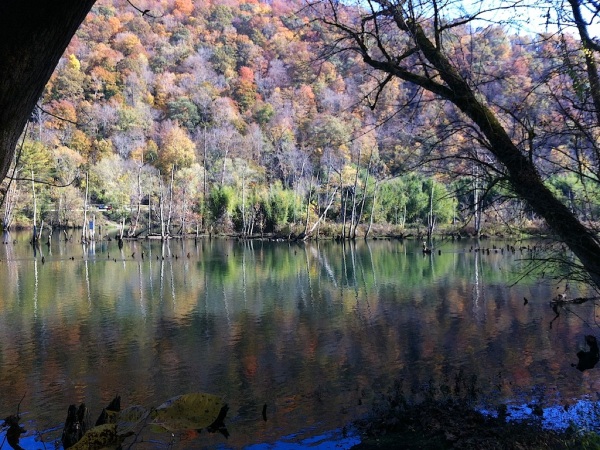 After the hike we stopped by the west side overlook over the dam itself and got a nice shot of the dam and lake as well as a nice panorama shot of the whole valley.

Then we headed back for a shower, picked up a pizza and some beers and headed over to Mary Jane’s house for dinner. We still were pretty tired so headed home about 2000 and watched some TV until time for bed.

Today turned out to be the big boy hike after we ran a couple of errands. Neil needed a bigger hammer to pound the re-bar that the flag sits on into the ground; the little 12 ounce claw hammer he was using just doesn’t cut it so he bought a 3 pound short handled sledge. We also got some air filters and a water filter for the fridge and some E-Z anchors to remount the shade that fell down last night. After that we picked up a Subway sandwich for lunch at the top of the mountains and headed out on our hike. It was only about 4 miles but it was up to the top of House Mountain then along the ridge then back down to the parking lot. The good news was that it was a really, really beautiful day for a hike. The bad news was that the top of the ridge was about 1000 feet higher than the parking lot. Of our 4 miles total; about 1.5 miles was along the top of the ridge, which left the 1000 foot climb up in 1 miles and the 1000 feet descent in another 1.5 miles. It was really steep in most places with a lot of climbing up (or down) over rocks rather than straight hiking. Connie was quite glad to get back to the parking lot and we headed home.

Here are a couple of shots from the West Overlook where we ate lunch and of Connie resting atop our lunch rock. 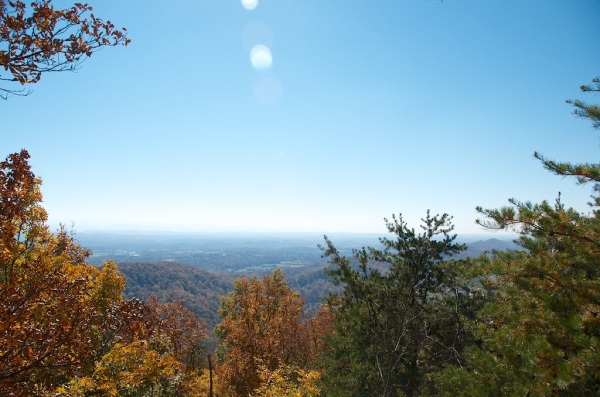 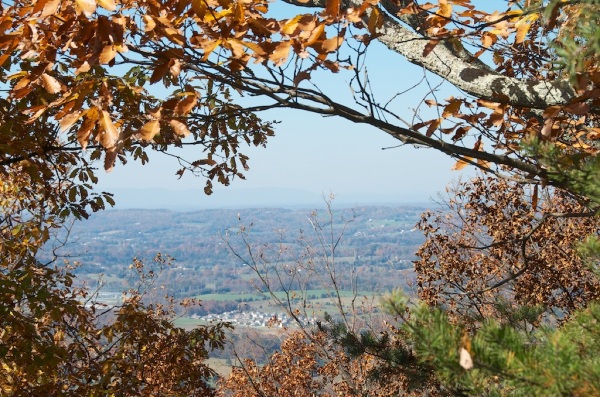 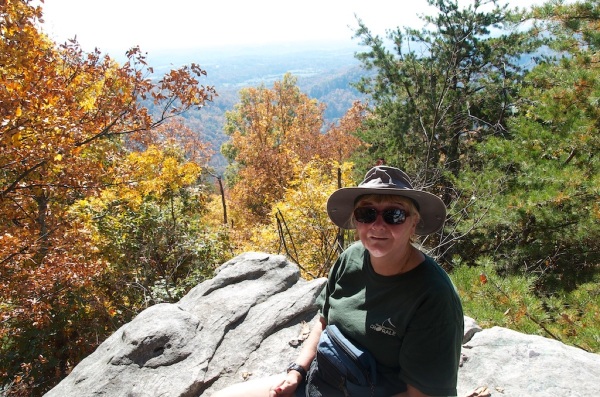 As we were traversing across the ridge toward the trail back down we ended up on an ATV trail where the phone company sends up repairmen to work on the cell towers located on top of the mountain. Of all the strange things we’ve seen on hikes this marks the first time that we ever saw a trail blaze pained on a power pole instead of a rock or tree.

We reached the midpoint of the ridge trail and had to make a decision. Door #1 was to continue out to the Eastern Overlook then back to the midpoint to catch the blue blazed trail down to the parking lot and add another 1.4 miles to our hike…Door #2 was to skip the Eastern Overlook (which was reported by another hiker to have far superior views) and just head down. Connie was a bit pooped (well, a lot pooped) after the climb up so Neil took pity on her and we headed down (he was pooped too but probably not as badly as she was). We did get one nice shot looking out towards the East about ¼ of the way down the trail. 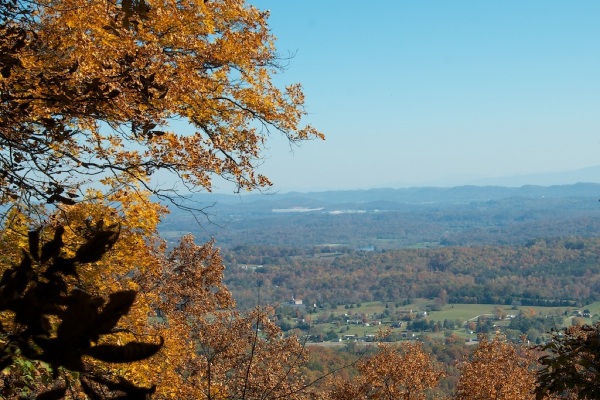 We finally got back down after climbing over at least thousands of rocks…Connie officially declared this to be a goat track on a par with those we saw up in Maine and New Hampshire. We headed home for showers and a nice pork and noodle dinner and watched TV until we fell asleep.

Tomorrow we’re meeting Mary Jane and Lauren at the Nature Park downtown then they’re coming back here and Neil will grill some chicken for dinner along with a fine vintage box’o’wine that Mary Jane is picking up.

Saturday we’re headed out for central Georgia unless Hurricane Sandy interferes. She is currently messing up the weather in the Bahamas and looks like she’ll be off the coast of Georgia and South Carolina on Saturday before making landfall in NJ on Monday. Strange to have a hurricane this late in the season…but since we’re driving into Georgia on Saturday we’ll look at it tomorrow and possibly stay another day here in Knoxville and head out on Sunday if necessary to avoid the bad weather. We are winging our campsite reservation in Georgia anyway so waiting another day won’t bother that at all and we would much rather not travel and set up in the rain.