Sorry I haven’t posted in a couple of days but we have been pretty busy here at Ortona South. As I said before this is a really beautiful campground and we’ve been mostly just hanging around, Connie’s done a bit o’ work and we did work in a couple of fun things.

Sunday after Mass we drove over to Palm Beach and went to the Our Lady Queen of Peace Cemetery to visit the grave site of Connie’s parents. It was a sad day and was the first time we’ve been back since her dad died back in 1997. We noticed that a lot of the tombstones in the mauseleum have crucifixes on them but somehow her mom and dad’s doesn’t have one; so we’re going to contact the cemetery administrators to see about having one added.

Connie’s mom didn’t want to be buried in the ground so she and Harry got this lower row location in one of the above  ground mausoleums in the cemetery. Connie and Neil had a nice visit with her parents…they both still miss them even though it’s been 15 years since Harry passed on. We’re planning on making another trip over on Jan 14 which is their wedding anniversary as well as both of their birthdays. After the cemetery visit we stopped by a restaurant named Bru’s Room owned by a former linebacker for the Miami Dolphins and had a couple of pints of Guinness and a sandwich then headed home for dinner.

Monday was a work day for us. Connie worked and Neil did some computer stuff. They had a nice dinner of pork roasted on the grill with some cocoa/pepper dry rub, grilled pineapple and some veggies (corn for Neil and zucchini for Connie). Other than that Monday was pretty much a rest day.

Today Connie did some work in the morning while Neil went off and found a laundromat…he stopped by the Winn Dixie for some groceries on the way back. They had a nice smoked turkey sandwich for lunch and then headed out for some fun stuff. They headed to the Franklin Lock on the Caloosahatchee River. This is the same river that runs by their campsite but is about 30 miles or so west/downstream towards Fort Myers. The destination was a boat ramp where Neil quickly (well, maybe not so quickly since it’s a foot pump for the inflatable) pumped up the Sea Eagle kayak then they were off. They headed downstream about 1/2/ mile and then turned right into Telegraph Creek for a 4 mile up and back paddle. Telegraph Creek has just a little current (not like the main fork of the river) and they picked their way through a channel that varied from 50 to 20 feet wide. Zig zagging their way around fallen trees and branches in the water they  made their way upstream. Here’s a picture of Connie paddling and of the creek itself.

This last shot was of one of the wider parts of the creek; later it got really narrow and they had to pick and choose the best way past the logs and overhanging branches. Along the way they saw a Muscovy Duck and some Llamas (sorry, no Llama pic) 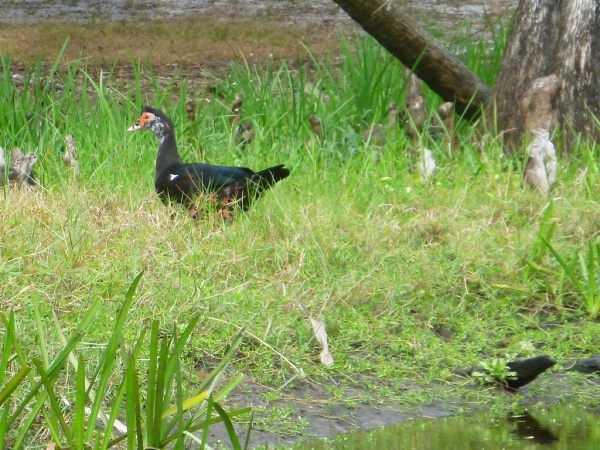 some sort of turtle

(this was the little one; they ran across one about twice this size another 200 yards or so upstream but he dived off the log before Neil could take a photo).

Right at the turn around point (determined by when they were half tired since they had to go back still) Connie spotted this Barred Owl right over the creek. We spent about 5 minutes right below this specimen about 18 inches high before he got fed up with the pesky humans and silently (that’s what owls do) flew off to another tree.

After that they turned around and made their way back downstream, under the highway bridge, and back to the exit from the creek back into the Caloosahatchee River. From there it was a tough half mile back upstream and upwind to the launch area near the lock/dam. Their arms are really going to be sore tomorrow although Connie has a really big bruise on her thumb that she got somehow during the day.

Packing up the Sea Eagle they headed back to the campground then down to the bath house for a quick shower…running into this little guy across from the bath house. 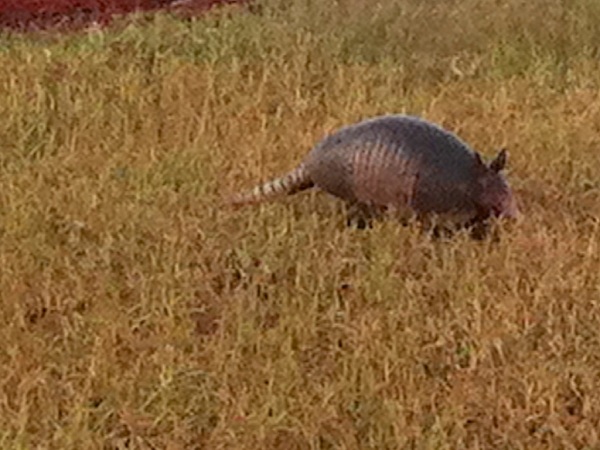 Kinda of a crummy photo but it was almost dark and it’s a phone picture anyway. Guess they need to think about upgrading their iPhone 4’s to iPhone 5’s for better photos.

Back home after showers Neil broiled a steak for dinner along with some rice and left over veggies (corn and zucchini) from last night along with a couple of wine coolers and then some Barefoot Merlot (hey, it was a good week for red wine when they made it). Tomorrow is another work day and then Connie needs to go get her nails done. Don’t know when the next fun stuff will be.