Merry Christmas to all of our family, friends, and readers!!

Midnight Mass was a great success. Connie’s solo was wonderful and her duet was also pretty good. Carols started at around 2330 and Mass was over by about 0130. On the way home we continued a tradition we started in Fairfax a dozen years or so ago and stopped at Denny’s for breakfast. Neil wasn’t interested in anything too heavy so passed on all of their Slam combinations. Instead he ordered an English Muffin and a side of Sausage Patties. Put the two patties on the muffin and…voila, instant breakfast sandwich. He was still feeling pretty poorly with his cold. Connie had some eggs, hash browns, bacon and toast. We got home and into bed about 0200. Neil woke up about 0715 with all his cold meds and Advil having worn off so he felt pretty lousy. He took more drugs and slept in the recliner until 0830 or so when the adults had coffee and opened Xmas presents. There were hiking socks, new Swiss Army Knives, cutting boards, spices, slippers, running shoes, chocolate, cargo shorts, blouses, more hiking socks, earrings and pants. All was stuff we needed. Here’s a picture of Connie, Kara and me sitting in front of our Xmas tree. 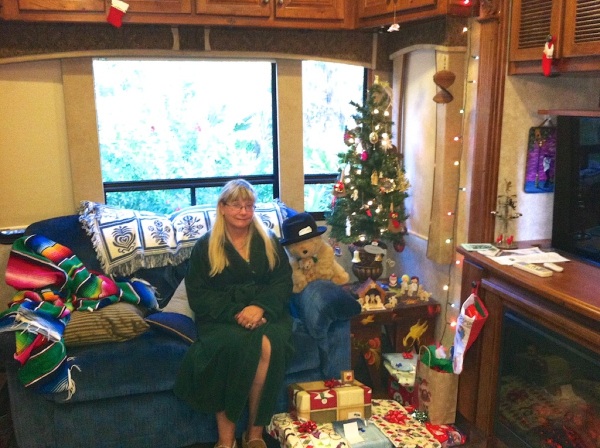 We then made cinnamon buns for breakfast (not as ambitious as it seems…start with a package of Grands refrigerated biscuits and them mix butter, brown sugar, and cinnamon; schmear it across the buns and bake until golden brown and delicious. After that we took another nap then Neil went on a short bike ride…he struggled about 7 miles and then took a nap for an hour in the recliner outside under the awning.

For dinner we had marinated and grilled Lamb Chops (marinated in olive oil, rosemary, garlic, and balsamic vinegar) along with some baked sweet potatoes and a cream corn casserole with bacon, onions, peppers, cream, and parmesan cheese. Dinner was really, really scrumptious!! We bought a bottle ($5) of of Fontera Merlot and it was amazingly good for the price. We have enough leftovers for dinner tomorrow. Here’s a picture of our dinner (actually it’s a picture of the leftovers the next day; but the leftovers are the same as the original dinner since I forgot to take one yesterday). 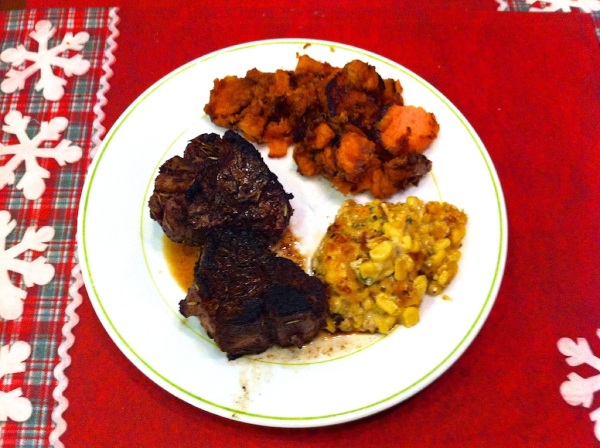 Bryan and Jen called and talked to Connie while Neil was asleep in the recliner outside in the afternoon. He missed talking to them but got all the news from Connie when he woke up.

Dessert later is the date balls we made yesterday with ice cream, chocolate sauce, and whipped cream.

Connie’s knee is improving a bit since she stayed off of it today and yesterday pretty much. Hopefully Neil will be on the mend by tomorrow or the next day.

Tomorrow will probably be a lazy day and then we’re planning on heading up to the Sun and Fun Resort near Sarasota for a tour on Thursday or Friday; we’re thinking about stopping there for a week after we leave here just to check out a “resort” experience and see if it’s worth the extra cost for what you get. We have our doubts but until we try it we’ll never know.