Happy New Year everybody. For New Years Eve; Connie got dressed up fancy and we went down to the pot luck at the park…really good food, a bottle of bubbly, and Connie did a couple of Karaoke numbers (Music of the Night from Phantom and You’re So Vain by Carly Simon). It was amazingly good considering she had never Karaoked before, didn’t have any music, and had never seen the actual words in the song before. The crowd lived it…after dinner we headed home about 2100 and watched the end of the Clemson-LSU bowl game. It was a pretty exciting game with Clemson winning on a last second field goal. LSU’s defense was winning the game pretty handily except that the LSU offense was pretty anemic and gave the defense no help at all.

We got up about 0530 this morning with plans for a birding trip. Connie verified that her knee was feeling better then we headed off to Shark Valley which is located about 120 miles away from us in Everglades National Park. There is a 15 mile loop park road from the visitor center out to an observation tower and back. There is a tram that you can pay to ride the loop on; or you can hike; or (best idea yet) you can bike it which makes the day turn into essentially a 15 mile birding hike but without the long hike part.

Warning; this is a pretty photo intensive post…but it’s the first really decent day we had a chance to get out and go birding since we got here.

We had some breakfast from the Golden Arches and a cup of coffee from home on the way over and got to the parking lot and headed out around 0845 or so. At that point the crowds were pretty small so we mounted up and headed out. Within the first couple of hundred yards of the flat, paved tram path we saw a male Anhinga sitting on the nest with a couple of chicks (which you can’t really see in the photo as they were down). Both the female and male share the nest duty.

and the Everglades staple, our first couple of gaters (or allagadah as Troy from the Swamp People TV show would pronounce it). 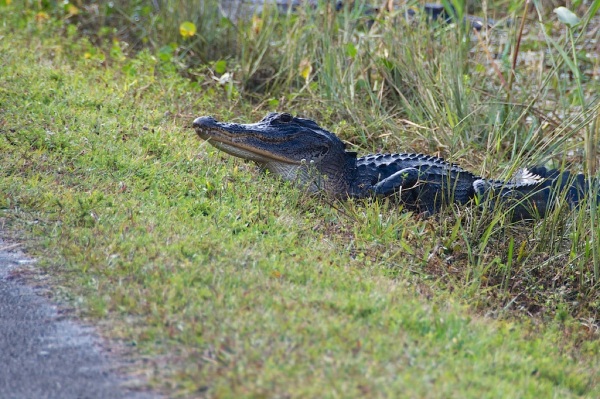 Notice how both of these guys are about 2 feet from the edge of the 8 foot wide tram path…these were both about 6 feet long or so.

and the counterpart female Anhinga (the female is the one with the brownish neck area). 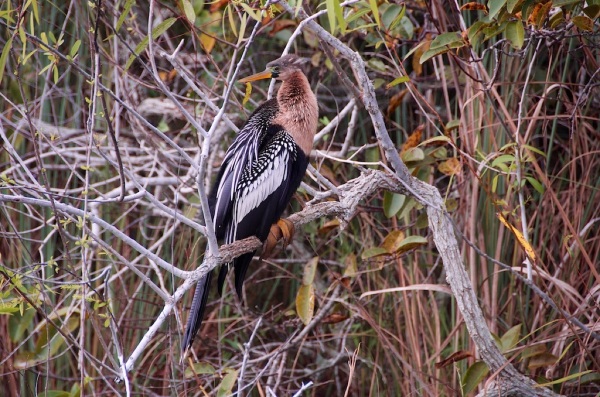 Continuing on down the path we saw another gater

Finally the one with it in his beak solved the problem by declaring the meal to be takeout. 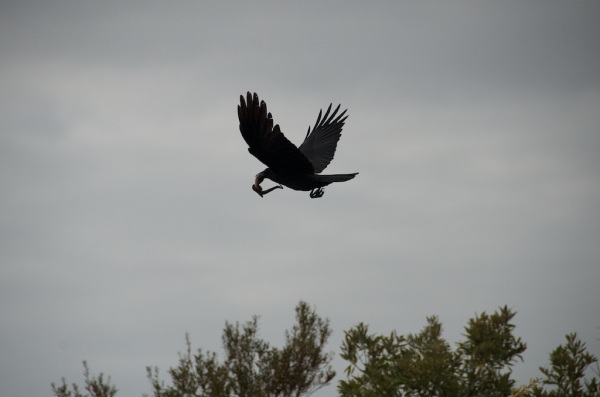 We were just about to ride out after taking these photos when Connie spotted a Great Blue Heron across the canal and partially hidden.

then a few hundred yards down the path we saw another Great Blue.

We had a hard time identifying both of these since they lack the characteristic crest behind the head that Great Blues have but after much looking at Petersons decided they were immature specimens lacking the crest. 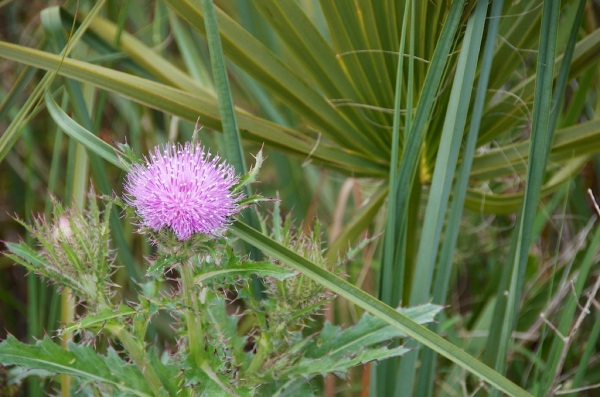 then we got to the observation tower where we parked our bikes, changed (Neil) out of bike cleats to something easier to walk in and had morning snack. We then headed off to the tower and Neil spotted a Green Heron near the walkway.

From the observation tower we spotted a Wood Stork

which is a beautiful bird in flight but has a face only a mother could love and several more larger gaters around the pond.

We then mounted back up on the bikes and headed back towards the visitor center. By this time it had shifted from partly cloudy to a mostly sunny and beautiful day. Here’s another gated…this is a large 12 footer or so and as you can see he’s maybe 3 feet from the narrow tram path.

Continuing along we spotted another Wood Stork near a pond

and then a Great Blue Heron near a little hummock. Neil got a nice 3 picture sequence of it taking off and heading away into the swamp.

Then we saw a Little Blue Heron hunting lunch in a little water hole.

Shortly after that we got back to the visitor center, packed up the bikes and headed out. We were getting pretty hungry by this time (1330 or so) but didn’t see anyplace to eat for 40 miles where we finally saw and stopped at a Subway for a sandwich. Man did it taste good.

Right before we found the Subway we passed the Ochobee, Florida Post Office. This is actually a fully functional post office and serves 3 counties in the southwest Everglades area to this day.

That’s about it for today. I’m going to try and post something almost every day rather than sporadically as I did most of the past several months. The good news is that I’ll try to post every day. The bad news is that some of the posts will be daily life posts if we didn’t happen to do anything really interesting that day. I’m trying to strike a balance between giving our readers something new and posts that talk about having coffee, reading email, and having a siesta in the afternoon. Let me know in a few weeks whether you like the new post idea or the old post idea better.