It was a bit nippy today when we got up; we had to fire up the furnaces for one cycle to get it up from the 62 inside it dropped to overnight. Once that was done we had coffee, breakfast, and went to Mass where Connie cantored for her final time before we leave here on Mar 1. Home for lunch then Neil got to work on finishing up the installation of the slide topper supports and construction of the new flagpole (he cut all the pieces yesterday while had the jigsaw out).

First up was the slide topper supports. Here is a photo of the living room topper before he installed the support structure, there was about 5 times as much water puddled up there after the storm was over.

Here is the support which is constructed of 1-1/4 inch schedule 40 PVC piping. The long pieces are 4 feet long which is about the most you can have without it sagging since PVC pipe isn’t all that rigid. The T shaped feet are glued together but the beam pieces just press fit into the T joints on top of the base pieces; that makes storage easy when it’s taken down. He completed the cutting and base assembly yesterday afternoon so today it was just a matter of documenting, assembly, and installation. 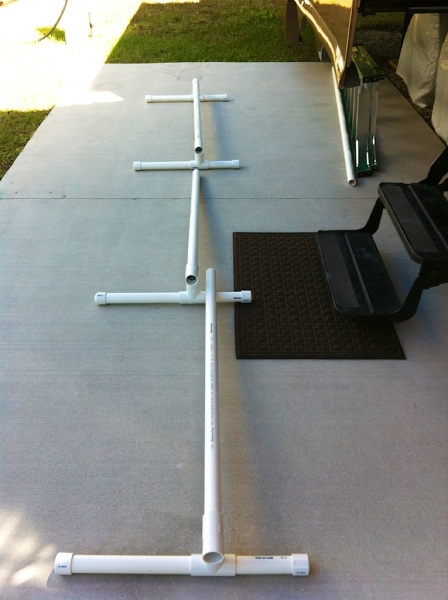 And here is a snapshot of the topper with the supports installed. Neil went up on the roof afterwards and all the water puddled in the top photo had drained off by the time he got all of the structure installed. 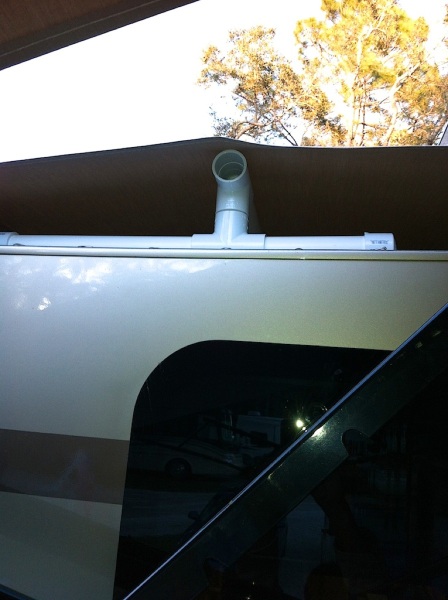 A side benefit is that the structure will also cut down on the topper flapping and making noise in the breeze; this can get annoying when the breeze kicks up past 20 knots or so.

After that he moved on into the new flagpole. Our original pole was an 7 foot piece of 3/4 inch PVC pipe with the flag attached; the PVC goes down over a 3 foot piece of concrete rebar that he pounds into the ground. Functional but not very nice looking and really doesn’t display the flag very well as the breeze that low is not too much so the flag is mostly just hanging. So he decided to construct the new one based on several he has seen in various parks as we’ve been traveling.

As with the slide topper supports, he used 1-1/4 inch schedule 40 PVC pipe. The two long pieces are 4 feet long and the three short pieces are 1 foot long each. He picked up a combination of stainless steel and zinc plated hardware so it won’t rust since it sits out in the rain. The 45 degree angle on the flag holding portion is perfect for getting a better display of the flag and the two small hooks on the horizontal bar opposite the flag are for hanging a nameplate that he is ordering with their names and our web site address.

Here is a picture of the finished product. It swivels in the wind so that the flag is on the downwind side. We already got two compliments on it.

After he was done he want on a bike ride but it was pretty windy and he should have worn a long sleeve shirt…but he pedaled really hard and kept his pulse rate up to compensate…followed by a nice little nap for a few minutes in the sunlight on our patio.

Dinner was left over pulled pork from last night mixed with baked beans; they were a little bland last night so wespiced them up with some maple syrup and Frank’s Hot Sauce.

Tomorrow Neil is going to head down to see if he can get some more pictures of Ozzie and Harriet, our resident Bald Eagles. Tuesday we’re planning on another visit to Corkscrew Swamp Sanctuary…the water should be much lower than for our last visit in November so the bird pictures should be better…not to mention that we’ve got the new long lens to bring the birds closer, although we will have to carry a tripod to use it.