We got up today; had coffee and breakfast and started working on breaking camp about 0830. Connie did the inside while Neil did all the outside tasks, taking down the flag, packing the basement, and the like. We dumped the tanks, hitched up to BAT, and hit the road about 1230 or so. After a 70 mile transit straight up I-75 to Sarasota; we’re here in site LA69 at the Sun N Fun Resort. I forgot to get a picture but will take one tomorrow and post it them.

We rolled into our standard arrival routine…Connie cleaned the house inside and pulled all the stowed decorations, countertop items, and stuff out of their safe travel locations. Neil brought on the utilities, rigged the slide topper supports, raised the flag, ran the under coach lights, and anchored the awning down.

After that, Neil went on a quick bike ride through the park then we had a shower…because frankly both of the adults were kinda stinky after their hard work today. After that we headed up to the Boondock Poolside Bar and Grill and had a couple of Yuengling’s. 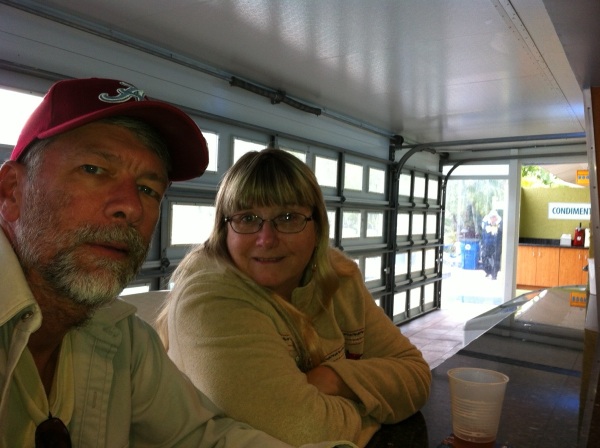 After that it was getting towards dark so we headed back home. Neil chose poorly and put on shorts after his shower, it was damp, windy and cloudy this afternoon so he was glad to get back home, change into jeans, and flip on the fireplace while he was making dinner.

After quickly whipping up a couple of wine coolers…I can tell you that Conquista Torrontes wine from Argentina is pretty good…he started some rice in the rice cooker. On that was done he took a 1 pound piece of Ahi Tuna that we got the day before yesterday at Costco, coated the top and bottom with coarse ground black pepper and toasted sesame seeds, and seared it about 60 seconds on both sides. This cooks just the top 1/8 inch or so and leaves the inch thick center completely raw. Sliced it up thin and served with rice, soy sauce, wasabi, and some pickled ginger for Neil (Connie refuses to eat it). What a yummy dinner.

So far; I’m not sure whether the adults like resort parks or not…it seems kind of busy and crowded compared to Seminole and other state parks we’ve lived in but we’re going to give it a whirl the next 6 days and see how a more upscale resort type atmosphere grows on us.

We found a broken piece in Connie’s recliner…this is terrible and must be fixed ASAP…we looked on google and found a nearby LZ-Boy dealer where we’ll take it over the weekend and see what they want to do about. LZ-Boy’s have a lifetime warranty so I imagine they’ll just replace it…although it won’t be in stock and we’ll have to get it shipped up to Pensacola to pick up in a couple weeks when we are up at Gulf State park.

Fun stuff…I don’t think Connie has figured out what we’re doing yet. She ended up with 6 hours of work today between what she did last evening and today answering emails and solving problems as we got ready to travel and setup afterwards. We did receive our new flag signs as well, I’ll get a picture of them tomorrow as well as our site.