Warning; this is a really photo intensive post…we really hit the mother lode yesterday not only on new and rare species but also had really great photography conditions at relatively close range. That would have been bad enough but we also caught a great flight sequence of a Red Shouldered Hawk and a fishing sequence of an Osprey. The shots were so great Neil decided he had to include them even though they will get this post pretty large. C’est la vie.

After about a 15 minute drive or so and paying our entrance fee into the park we stopped by our first stop which was the Nature Walk and Canopy Walk. The nature walk was pretty nice although the noisy groups of people that came behind us pretty much scared off anything to see the last half of the walk…and the Canopy Walk (a boardwalk through the tree canopy) was pretty much worthless. In the first place it was only about 20 yards long and in the second place the noisy tourists had descended onto it like locusts and there was essentially zero to see. Nonetheless; we did get a few decent shots during the walk. First up was this pair of female wild turkeys; there was also a male with them and a nearby wood stork but none of the shots with those turned out worth posting.

This is a view of the forest hammock we were hiking through and a really strange palm tree of some sort that attracted Neil’s interest.

Our second stop was out at the visitor center where we ate lunch but nothing worth photographing was there; so we headed on over to the Birdwalk out into the marsh.

Connie got this nice Iris right next to where we parked the car.

and Neil got some nice closeups of a Palm Warbler and three Turkey Vultures eating something dead (a muskrat we thought but they didn’t pick it up long enough to really get a decent shot so that we could really identify it.)

We got out to the overlook and Neil got a nice shot of a Snowy Egret coming in for a landing and then one of it’s gorgeous breeding plumage; that’s the fuzzy stuff on the back of his head. there is usually more that drapes down from the body but it doesn’t look like it’s fully developed yet. Doesn’t he have really pretty yellow feet? He twitches them along the bottom while feeding and the bright color scares prey into motion so he can stab down with his beak and eat it. 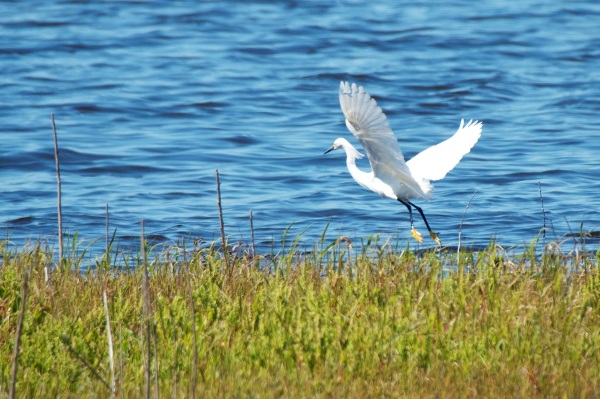 After this we headed back to our final hike of the day; a hike about a mile out and back right along the Myakka River. We met a nice British couple who were as excited by the numbers of wildlife as we were…apparently bird watching in England is a whole lot more waiting and a whole lot less species identification as they don’t come as fast and furious as they do here in Florida.

Our first catch was the mandatory gator (it is Florida after all says Neil).

followed by noticing immediately to his right about 10 yards further downstream what we initially assumed was a Great White Heron. Upon further review after deciding it really didn’t look right we did more research with Petersons and concluded it was a Reddish Egret White Morph (strange name I know…but even stranger is something called a Reddish Egret that is actually white.)

Both of these were taken standing on the bridge over the river…we started to head back across the river to head out on the hike and noticed an Osprey overhead. By the time Neil had him in the viewfinder he was into his fishing stoop and we got this great sequence of him crashing into the water and then leaving with its lunch firmly clutched in a talon. 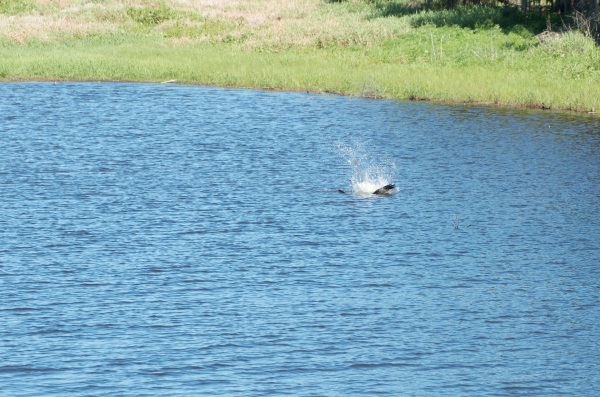 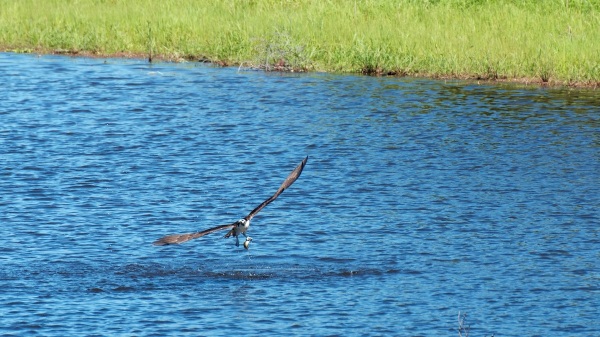 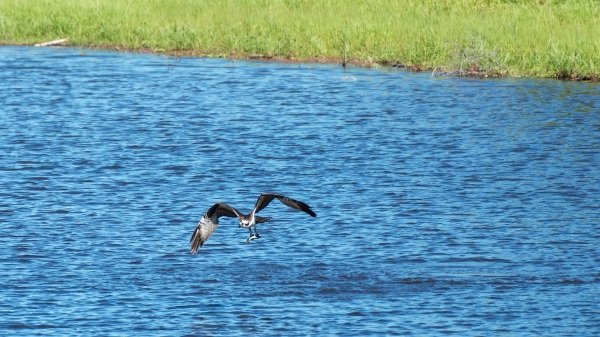 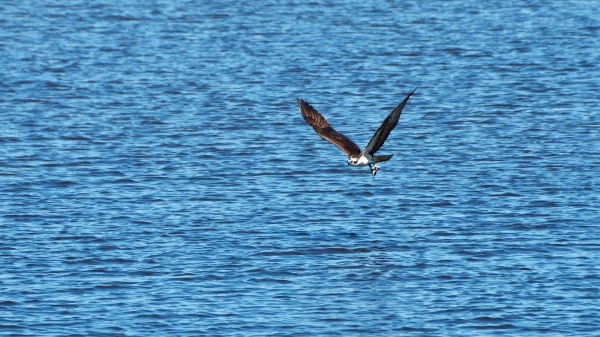 Wow, Neil is really happy with how those came out and was impressed with being able to get it. The Osprey continued on right past us but the auto focus on the camera wasn’t able to keep up so these are the best shots of the flyby.

Next up as we headed up river was a Tricolor Heron (or Louisiana Heron in some circles). This is very similar to a Great Blue in size but has different coloration. 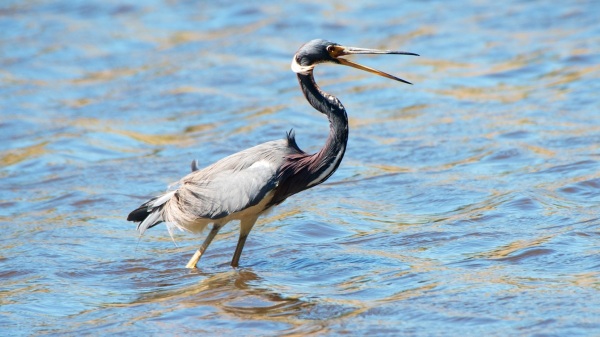 followed by the other version of a Reddish Egret, the dark morph that is more typically seen. 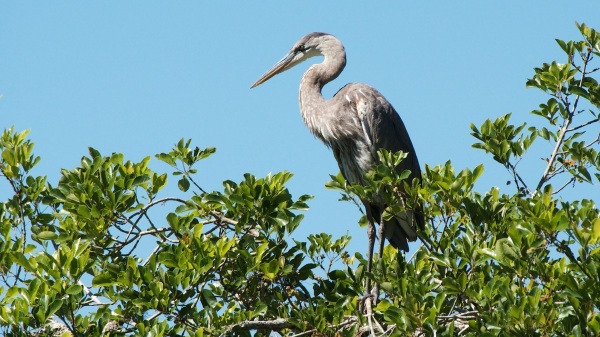 This turtle was sunning himself

and shortly afterwards we met the aforementioned British couple. They were 20 yards or so ahead of us on the path and almost walked on top of a Red Shouldered Hawk. It flew back towards us then out over the river…they came running back to see it as seeing hawks up close is difficult in England. It got away before we got a picture though. We hiked more or less together the remaining distance out to the turn around in the trail and headed back. On the way back we heard a Barred Owl and after 10 minutes of the 4 of us looking for it the Brit scared it up, it flew right over our heads and into the deeper forest. Again, too quick for pictures since we never saw it until about 2 seconds before it flew but we were all impressed with the sighting anyway.

Continuing on back downriver we happened across what we first thought was a Night Heron but after a second look turned out to be a  Least Bittern with another one right nearby. The first flew to our side of the river and posed nicely about 10 yards from Neil while the second was more shy and remained in the tree across the river but we got a nice shot anyway.

It’s always funny how Bitterns stand on one leg if the perch is secure enough rather than on two legs.

Our next find another 50 yards downstream was a Black Crowned Night heron and a Little Blue Heron in pretty close proximity.

After watching these for a few minutes we continued and came to an open area in the river with a small island. On the far side of the island a young couple were seining for fish completely unaware of a Red Shouldered Hawk almost overhead. We took a few pictures from afar in case it flew off then closed for some closeups. Neil got another really great flight sequence as it took off from a tree about 20 yards away, flew almost overhead, and landed in a tree about 20 feet from Neil. 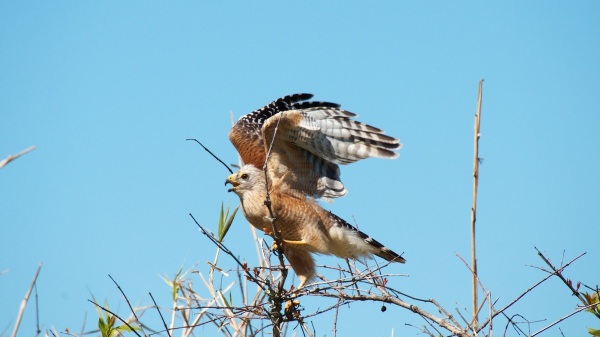 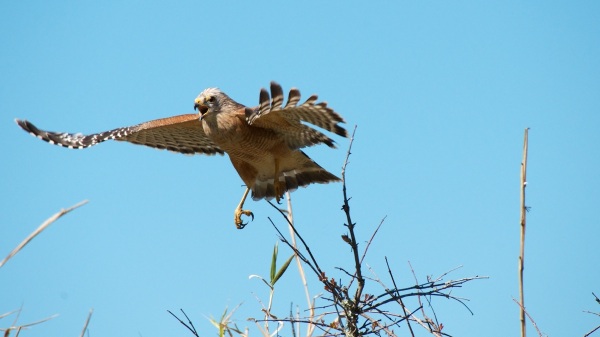 Our last major find of the day was this Greater Yellowlegs Sandpiper which was just a hundred yards or so from the parking lot.

RIght as we headed up the bank to the parking lot we got one more shot as this bald eagle went by.

and with that our day of hiking and birding was done…we had to leave to get ready for our dinner with Sparky and Eldo that I talked about last night and Neil ran out of storage space on the camera memory cards anyway.

Tonight we have plans to return to the Elks Club here in Sarasota again…we were there for beers on Monday and today they have hot dogs and bingo (and beers) so we are headed over there for dinner and entertainment.

Tomorrow we have another short excursion planned (time and Connie’s work load permitting) to the local botanical garden and then a stop at Walmart for groceries…our next stop is in Cedar Key which is pretty unpopulated as far as anything but bars and restaurants go with no decent grocery stores very close so we’re going to make sure we have enough to last for a week until we head for Gulf Shores.

Friday we’re off another 180 miles northward along the west coast of Florida to Cedar Key for a week’s stay at the Low Key Hideaway. Four campsites and a tiki bar right over looking the water and the weather is supposed to be warm enough for the kayaking sites Connie has picked out for us.