We woke up today and it was a really great looking day from the weather forecast. Connie has maxed out her work hours for this week…which means no more work until at least Friday…which means fun stuff is on the agenda.

After coffee, breakfast, and the bike race stages were finished we headed off. Our destination was Longboat Key and Anna Maria Islands right off the coast of Sarasota. We headed west on the main road right outside the Sun N Fun resort until it got to the coast, headed south about a half mile then west across the bridge to the south end of Longboat Key. Both Longboat and Anna Maria are your typical long, narrow, low barrier islands much like Hatteras and the other islands up off the North Carolina coast. Our plans were to find a nice place on the beach for lunch…but almost the only thing we found were condos, gated resorts, gated residential communities, and luxury real estate sales offices. We did stop briefly by Coquina Beach where Neil got a couple of nice iPhone photos to have something for the blog. Connie tweeted one of them to her followers…she has had an ongoing series of tweets since we went on the road entitled My View of the Day…several of her followers who are bike racers in England thought that these presented a much better weather situation than they were currently undergoing…it was apparently pouring in England today. Anyway; first is looking south and then looking north on the beach. Nice wide, white sand beaches typical of the Gulf coast. 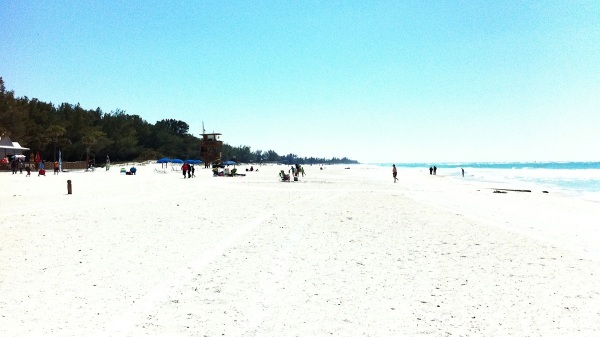 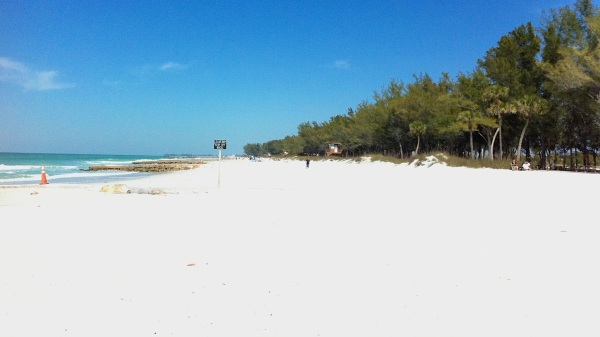 It was in the upper 60’s by the time we took these but was pretty windy on the beach so we were glad we had jeans and long sleeves. We continued up the coast as we were hungry and about 5 miles on found this place called the Gulf Coast Cafe. We stopped in, sat on the veranda, watched the waves roll in and had a couple of iced teas and lunch…a pretty decent burger for Neil and salad and a bowl of clam chowder for Connie. Afterwards we pressed on, crossing over onto Anna Maria Island and driving around it to see what there was to see…it was a pretty sleepy place.

We headed back across the north bridge towards the freeway, stopped for gas…and then headed to Walmart for groceries. We were originally going to hit I-75 about 3 exits north of where we are parked and would have to go 1 exit south of there to get to the Walmart. Luckily; as we were waiting to turn out of the gas station a Walmart delivery truck pulled out of the shopping center next door. We figured this meant it had a Walmart in it and quickly decided that one we were passing was better than one we had to go out of our way to get to. Forty minutes later grocery shopping was done…we headed home, unloaded the car and Connie went out to get her nails done. Afterwards we had Captain Morgan’s Black Spiced Rum and OJ and baked a pizza we picked up at Walmart.

Tomorrow we’re up early to pack, rig for travel, and break down all the inside and outside stuff…we have about a 190 mile drive ahead of us to our next stop at the Low Key Hideaway in Cedar Key. We’re looking forward to parking right on the ocean for a week.