Today was finally a decent day so Connie worked in the AM and Neil went on a bike ride. After that it was lunch and then it was off to Dealey Plaza to visit the Texas Schoolbook Depository Museum. This was all about the assassination of JFK back in 1963…and despite what you may or may not think about his politics and policies…he was the President and was assassinated so this is a historical site.

I’ve never really subscribed to the lone gunman theory that Lee Harvey Oswald was solely responsible for the crime…there are just too many discrepancies in the accounts and other unbelievable theories to really believe that this was the work of a lone gunman. Today’s visit reinforced that there had to have been some sort of conspiracy or accomplices and I don’t think that we’ll ever know what really happened. It’s been buried too deep…as we all know the government has a long history of burying things. I don’t want to get into a philosophical discussion of why I’ve always believed in a conspiracy but as my first commanding officer said…the facts as they have been presented fail the “reasonable man” theory.

Anyway; it was a pretty moving experience. Here is a picture of the most famous “grassy knoll” in history; behind which either the actual killer hid or not depending on your beliefs. This shot was taken from in front of the Texas Schoolbook Depository and the President’s limousine was approximately next to the man on the sidewalk when the fatal shot was fired. 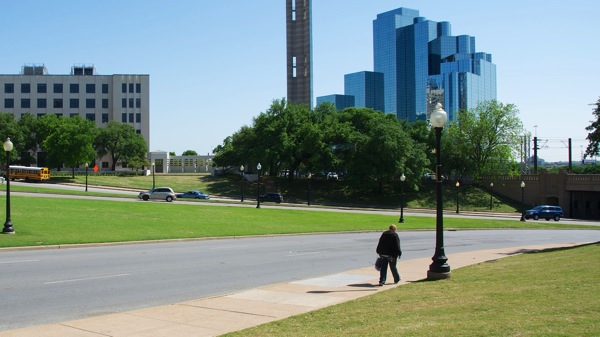 This building is really cool; Dealey Plaza is in grassy area in front of you and about 90 degrees to the left (picture taken from almost the same spot) is a building now occupied by the Dallas Tourist Information Center. We really liked the Tudor like style with the turrets and all the associated features.

Looking another 70 degrees or so to the left (all 3 pictures were taken from almost the same spot next to Elm Street where the President’s limo was when the shots were fired you can look back at the Texas Schoolbook depository itself. 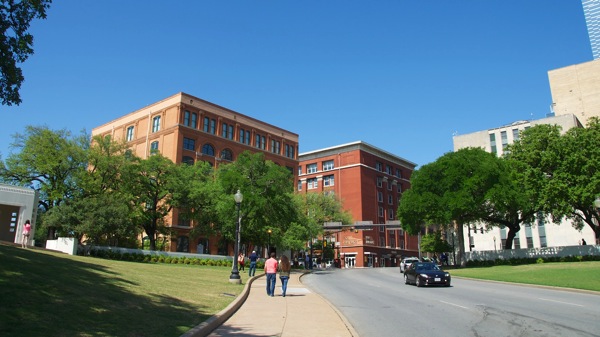 Dealey Plaza is to the right side of the picture and the Depository is the left hand red brick building you can see. The sixth floor window where Oswald was perched is on the far right side of the building one floor below the top; you can just make out top of the window he was perched in behind the tree. This photo was taken from about 20 feet away from where the limo was then the fatal head shot was fired; the first shot was fired when the limo was almost underneath the overhead highway signs you can see the back of just able and to the right of the grayish car second back. The distance from the window to the limo at the time of the fatal shot was about 150 yards or so.

If you’re interested in the conclusions of the Warren Commission or want to see what some of the issues that later investigations brought up about the effectiveness of the investigation then it’s all on the internet. Suffice it to say that nothing we saw today convinced me that the lone gunman theory is correct. I can’t point to any specify smoking gun that proves there was a conspiracy…but based on the totality of all the evidence (and granted I’m looking at it with a 2013 understanding of forensic science and not a 1963 understanding) it just doesn’t add up to me as being plausible.

By the time we were done with the tour it was 1600 so we headed home…unfortunately we got caught in the middle of Dallas rush hour…the reaction of the band was best summed up by my brother John who said “Harry, it sucked”. (line shamelessly stolen from one of the greatest songs of all time, Harry Chapin’s Thirty Thousand Pounds of Bananna’s). If can explain the reference if you really need me to.)

By the time we got back up to Denton we stopped at Albertson/s to see if they had any decent fresh fish to cook (no) so we went home and had some Wild Mushroom Agnolotti (courtesy of Bertoni Pasta) with a sliced up Italian Sausage, sautéed garlic, and pine nuts then topped with some Parmesan Cheese along with a Spiced Rum and Sprite with Lime cocktail.

Connie’s out of hours to work this pay period…which means she can’t work again until Friday…so I’m guessing there will be some fun stuff tomorrow although she hasn’t told us what it is yet.