Sunday was going to be the only nice day while we are here in Great Falls; so after Mass we changed clothes and headed out for a day trip to Glacier National Park. We had previously visited this park a few years back while on an organ trip to Calgary and weren’t that impressed with it but decided to give it another try. Turns out our previous impressions were probably flavored by having just seen Banff National Park in Alberta briefly the week before and also by the late fall time frame which meant that the water levels were low, waterfalls were just a trickle and too many tourists. We were pleasantly surprised that none of these issues were evident on this visit.

We wanted to go across Going to the Sun Road which transits Logan Pass (about 8000 feet) through to the west side of the park and have lunch with one of Neil’s old DC computer buddies who is now a farmer over near Kalispell MT. However, the road is still closed due to snow and isn’t expected to open until at least late June. We asked the Ranger at the entrance station how deep the snow was on top of the pass. She wasn’t sure but said they had some photos of the pass from a few days ago in the Visitor Center…and while she had no idea of this year’s answer she did know that last year the area known as The Big Drifts which is just short of the summit had 80 (yes, 80) feet (yes, feet) of snow on the road! We went into the visitor center and looked at the photos and while it might not be 80 feet deep there is some serious snow up there still. They don’t plow it like you would normally think of when clearing a road; it’s more of a heavy construction equipment, front end loader type of operation with excavators and loaders putting the snow into dump trucks which they go dump off the side of the mountain. So…no Going to the Sun Road for us…which turned out to be just as well since we would have missed a really great hike if we had spent the time to go all 30 miles across the park and back. We could only get in from the east side about 12 miles or so before getting to the Road Closed sign right near the Jackson Glacier overlook.

It’s about 120 miles as the crow flies from Great Falls to the park; in the photo below you can see the mountains in the park from probably 100 miles away. This was taken shortly after we exited the freeway to head up MT-89. The mountains are about 7000-8000 feet tall and the road is in the plains at maybe 4000 feet elevation. MT-89 is a 2 lane road vice a freeway but saves about 30 or 40 miles on the drive…and given that it’s pretty flat, straight, and the speed limit is 75 being on a 2 lane road doesn’t slow you down much. We were on 89 for 80 or 90 miles and saw maybe 2 dozen cars total on the road. It’s only the clearness of the air out here in Big Sky Country that allows you to see mountains that far away. 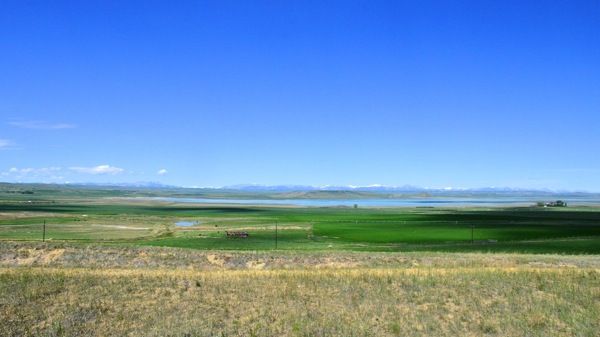 About halfway across MT-89 we entered the Blackfeet Nation Indian Reservation. They tribe owns basically hundreds of thousands of acres including several towns. We were surprised by how much junk there was in most of the yards that we passed…we have nothing against Indians we have noticed that usually on the tribal lands there is a lot of trash in the yards. Don’t know if it’s a cultural thing or what and we’re not condemning it at all but it is one thing you notice. The second thing you notice is that there are lots of tribal police force cars out giving tickets…they appeared to be giving tickets to Indians and non Indians at about the same frequency. 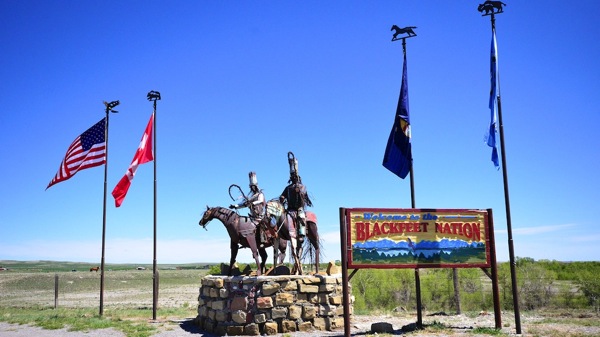 Coming across the last little ridge of hills and starting to descend into the valley east of the park we got a closer view of the mountains in the top picture.

Entering the park we passed the Ranger Station and Visitor Center and then headed west on Going to the Sun Road across the north shore of St. Mary’s Lake. Here is a nice shot looking west along the 9 mile long, 300 foot deep lake towards the central peaks in the park. Logan’s Pass is out of view to the right in this photo. 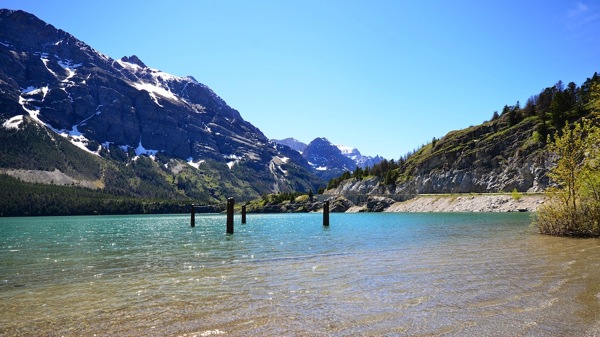 And here is a panorama view of the entire lake; this is essentially a 180 degree view looking south.

Here is another pano looking east; this one was taken from the road on top of the embankment you can see a little to the right of the pilings in the lake in the photo above.

A little further on we stopped for a picture of Wild Goose Island out in the middle of St. Mary’s Lake. This island is about a third of a mile out in the deepest part of the lake…it’s maybe 120 feet across and sticks up 20 or 30 feet with pine trees on the top.

Our trip up Going to the Sun Road came to an end at the “Road Closed” sign at the Jackson Glacier overlook. This is one of only about 15 or so glaciers left in the park; all of them are retreating significantly and the park will likely be glacier free by 2050. The glacier itself is to the south of the lake on the north side of the peaks where it is more protected from the sun; in this photo the 300+ foot thick glacier is about 8 or 10 miles away in the center of the photo.

This is supposedly the better falls on the hike but (as will become clear in a couple of paragraphs) we can’t say for sure since we didn’t actually find it on the hike. Continuing on another half mile or so we arrived at the bridge over the stream immediately downstream of St. Mary’s Falls. We recognized this fall when we got to it as being one we visited on our previous short visit…but today it had probably 3 or 4 times the flow over it that it did in the fall after the dry season. Lots of snow melt makes for impressive waterfalls. Two shots of the falls; first one gets the upper and middle falls from the far side of the bridge and the second from the near side of the bridge gets the middle and lower falls with the stream continuing out of the frame to the lower left. The top fall is 20 feet or so, middle one about 30 and lower one another 8-10 with the lower one being more of a cascade down a steep rock face than a typical vertical drop fall. In addition to the photos Neil took a short video of this fall, you can find it on our youtube channel at St. Mary’s Falls. Turns out that we needed to go another half mile or so up the trail to get to Virginia Falls and the long range photo above is most likely the upper portion. Still though; we’re glad we turned around as another mile plus photo time added to our hike would have put our time getting home at past 2200; as it was it was almost 2100 by the time we pulled into our campground and we were tuckered out. Virginia Falls will give us an excuse to come back here someday…during the summer so we can get across Going to the Sun Road. 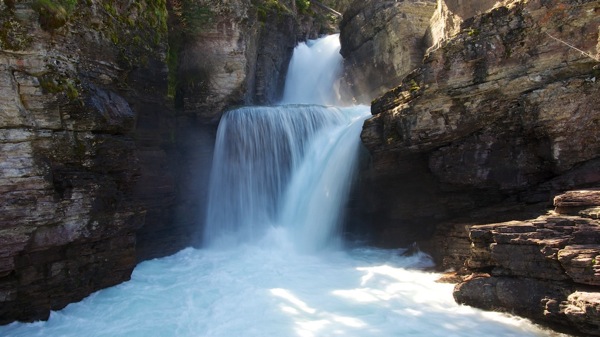 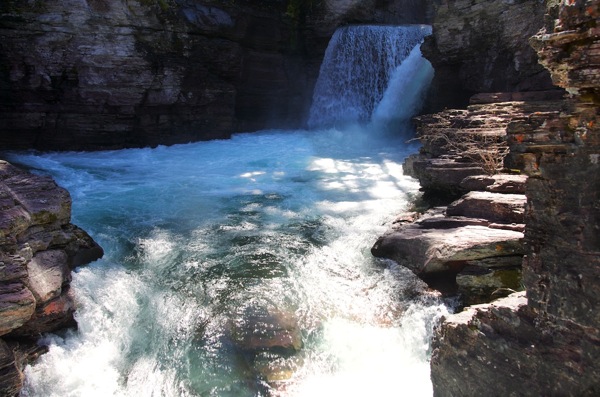 We continued on up the trail and after another half mile or so got to what we thought was Virginia Falls but turned out (we are almost sure) to be an unnamed but very impressive falls. We hiked down the side of the falls to the bottom for pictures (they’re always better from the bottom).

A couple from the top 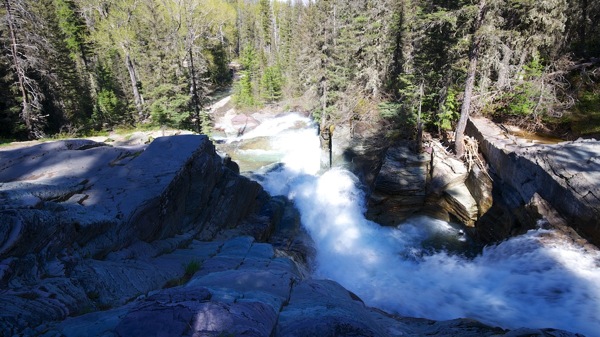 One of Connie resting on the log at the base of the falls and one taken by Connie of where Neil climbed up to get the pictures from the base. 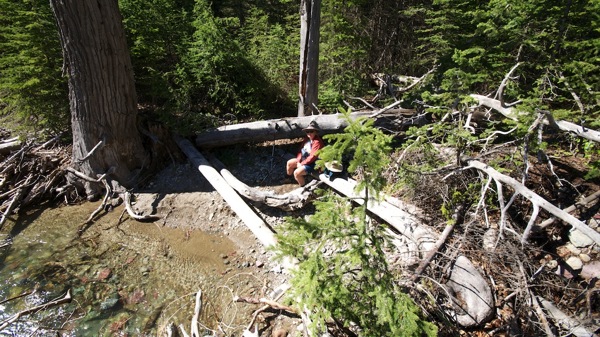 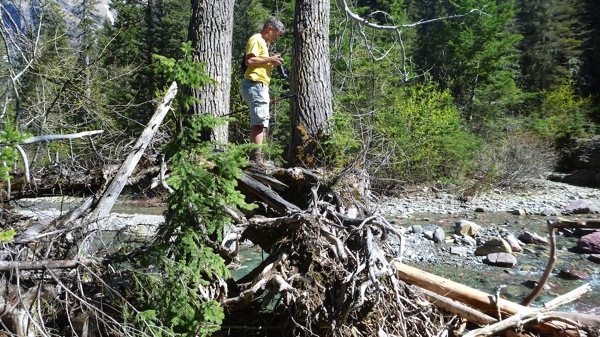 With that we headed back toward the car after climbing back up the falls to the trail itself. It was getting late and we were getting tired.

Connie spotted some flowers on the way back

and we spotted some deer droppings followed shortly thereafter by a Mule Deer (no word on whether the latter left the former or not). Frankly Neil was hoping for some Grizzly Bear Poop…he wanted to conduct an experiment to find out if bears really do s^%&* in the woods. We passed a guy on the way out who said he saw a couple of juvenile bears down in one of the ravines off of the trail…we passed those ravines within about the next 15 minutes but no bears for us. Connie didn’t want to see them at all…Neil wants to see one but only at telephoto picture range and not wide angle lens picture range:-) 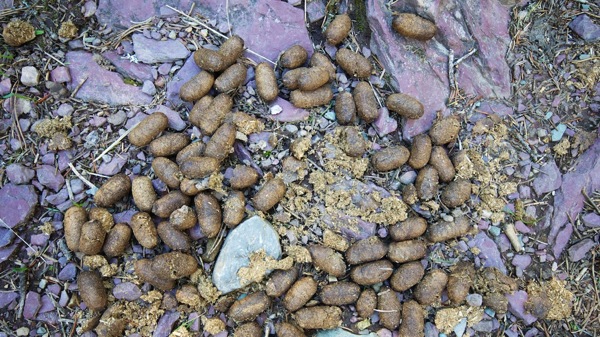 Our almost final find of the day was some more flowers, yellow this time. 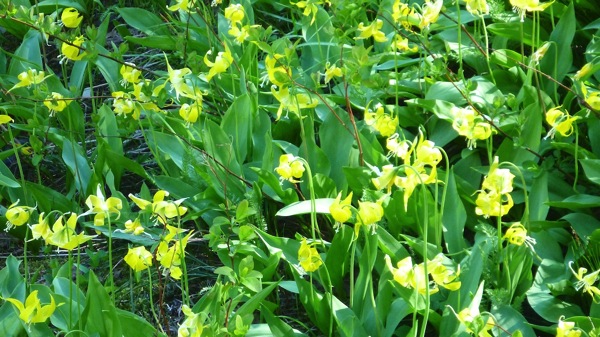 Then we headed for home. By the time we got back down to MT-89 it was raining and GPS said that cutting over to the freeway would be faster anyway. It was also getting dark and Neil was a bit worried about it being deer o’clock when those pesky critters start wandering out onto the road so we cut over on MT-44 towards I-15. On the way we found our final find of the day.

No word on what a lighted lighthouse is doing in the middle of Montana. No oceans around here that we are aware of.

We interrupt this blog post for late breaking news!!

We carefully looked at the busted bridge in Mount Vernon, Washington; evaluated the traffic patterns; and looked for potential ways around the detour (there aren’t many and I’m sure the truckers have already saturated all of them since there’s essentially only one road north/south in the area). After that we evaluated the importance of going to Vancouver (it was something nice to do but wasn’t really on our list of must do’s) along with the fact that driving from Vancouver down to Fort Lewis would essentially be 200 miles of city freeway traffic with BAT which would leave Neil in need of several drinks. After all of that we decided to punt on Vancouver and cancelled our reservation at Peach Arch RV Park. Instead; we’re going to change direction when we leave Salmon Arm BC and instead of 1 day west to Vancouver we’re heading south. After reentering the US at Oroville, WA we’re going to stay overnight at Osoyoos Lake right south of the border; there are 4 RV parks right in town as well as a Walmart so we’ll find an overnight stop on the fly. The next day we’ll be off to Leavenworth at the south end of the Wenatchee National Forest and stay 3 nights in the Pine Village RV park. From there it’s an easy 1 day trip across I-90 to Fort Lewis where we will rejoin our previously scheduled plans. Gotta love those plans set in Jello…or as the Marines would say “Improvise, Adapt, Overcome.”

We now return you to your regularly scheduled blog post!!

Today we’re doing some paperwork, getting groceries, and generally getting ready to head for Canada tomorrow.