Hikes at Annette and Pyramid Lakes and Wildlife Safari

Today started out pretty overcast and rainy; but that’s OK because Connie needed to work anyway. So after breakfast and coffee we headed off to the Snowcone Cafe where Connie bought 2 hours of internet access and got to work catching up on her email and student scheduling. Neil walked up to the visitor center and used the internet there since he didn’t need as much room to spread out and the wifi is free there. We worked, web browsed and read email until about 1130 and then went home for lunch. During the morning it mostly cleared up and was decent by lunch so we headed off for our planned activities. Good thing we did as the afternoon got better and better the longer we were out.

We originally scheduled a hike along the Athabasca River through the Old Fort Loop but it turned out that road was closed due to the elk calving area so we decided to go to the nearby Annette Lake instead. On the way to the Maligne Lake Road turnoff to head to the lake we ran into another jam so stopped and got some pictures. What was nice about this grouping was that there was both a buck (with antlers in velvet) and a calf in the group. We don’t if this is a family group or if they just happened to be in the same vicinity. 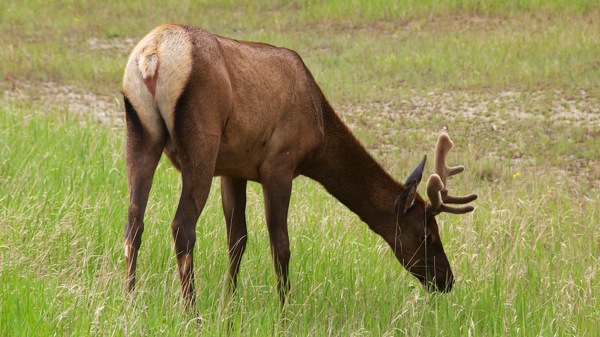 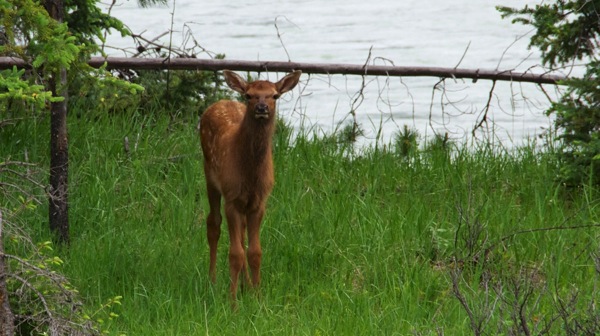 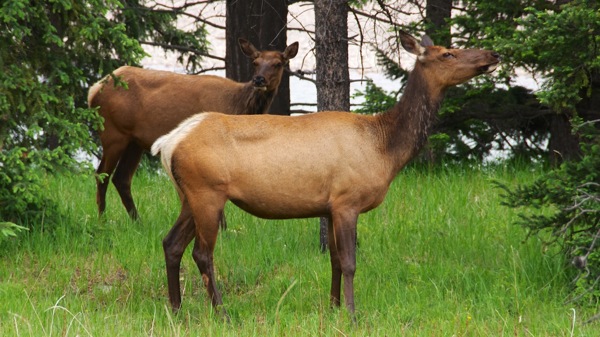 We continued on to Annette Lake and hiked completely around the shore of the lake (about 1.5 miles or so)…the lake is roughly triangular in shape. Here is a series of shots from various viewpoints as we walked around…we were really impressed by the colors and reflections of the mountains as well as the really nice shots with the mountains in the background as the afternoon got better and better…this series of shots covers just about 360 degrees around the lake. 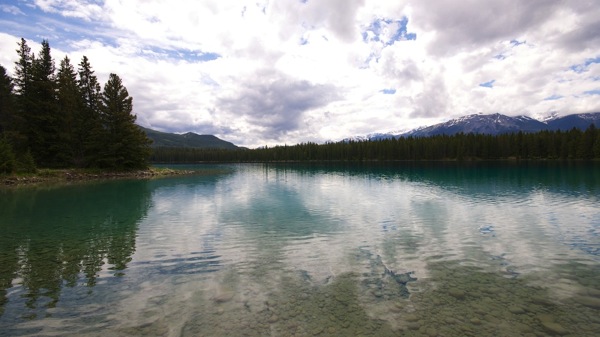 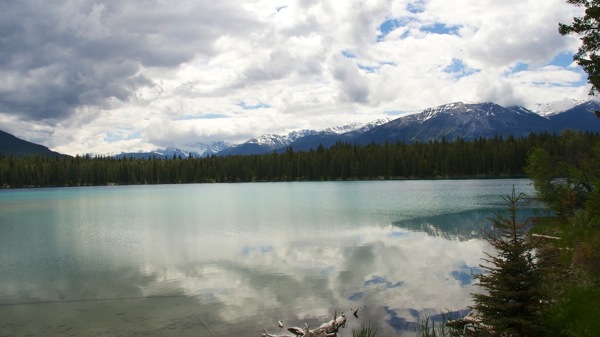 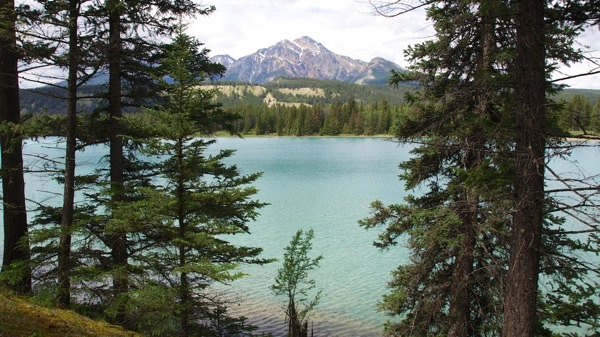 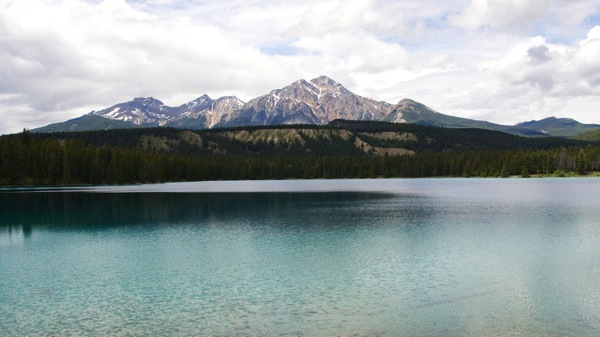 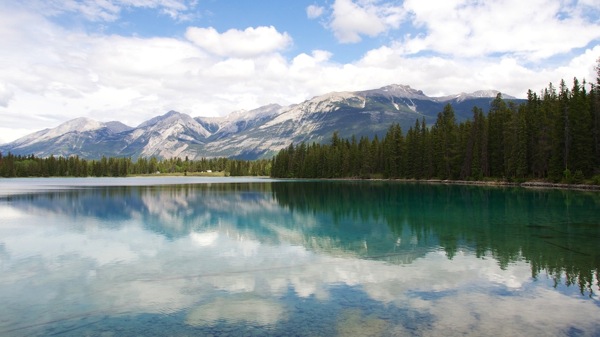 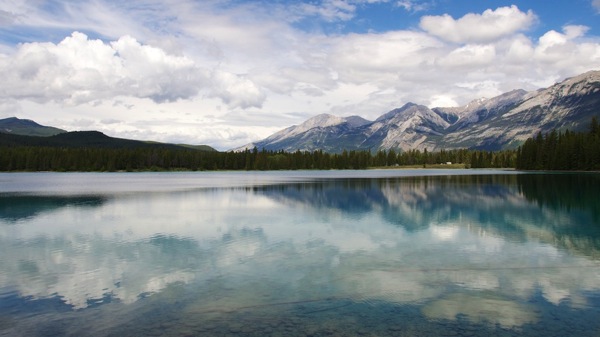 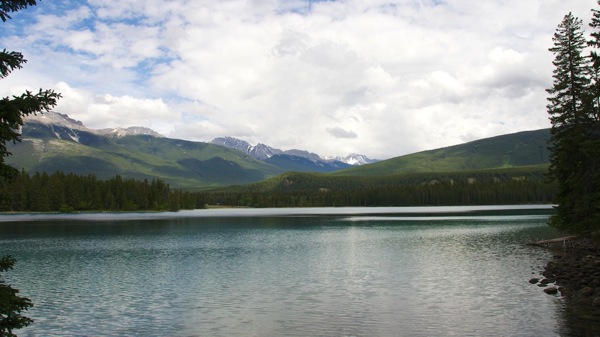 Along the way we spotted an abandoned nest; due to the size we are pretty sure it belonged to an eagle. 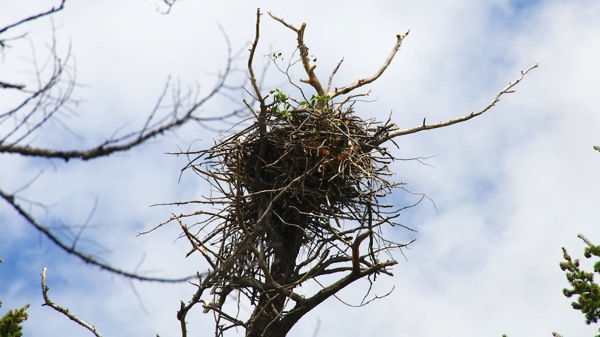 and then at about the same location as the 3rd lake shot (the one taken between the trees above) we spotted a bald eagle soaring over the lake. Don’t know what it was doing…it was likely too high to be hunting for something to eat…so it was just likely just soaring over it’s domain. 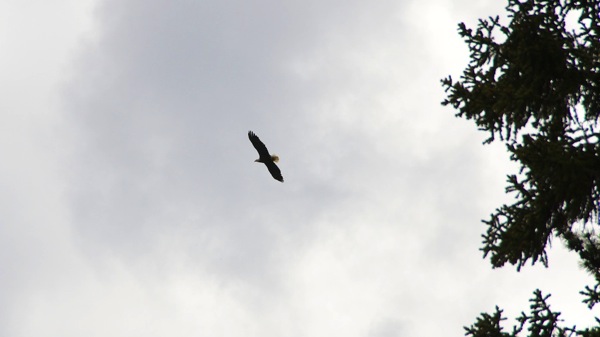 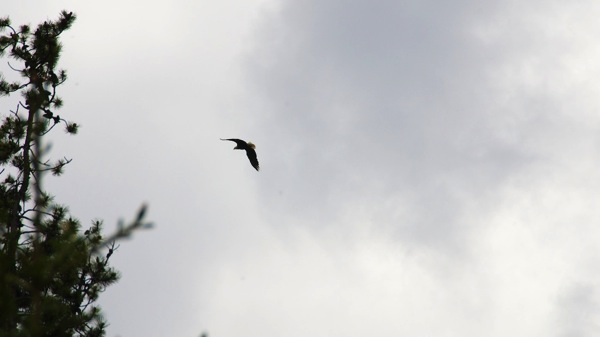 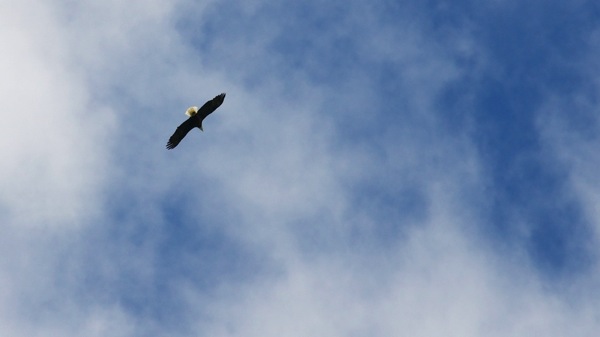 With that our hike around Annette Lake was done so we headed off to our second destination for the day…Pyramid Lake. Along the way we spotted a couple of pictures that I’m putting in here for our reader Neil’s older brother Ron. He commented on the blog a day or two ago and wondered why all these really picturesque lakes must be chock full of trout and there must be really good fishin’ in them. We haven’t spotted many fishermen on the lakes and rivers but we did see these two so Neil grabbed pictures of them. No word on whether either of them had any luck or went home empty handed…and the first one looks an awful lot like novelist Tom Clancy. 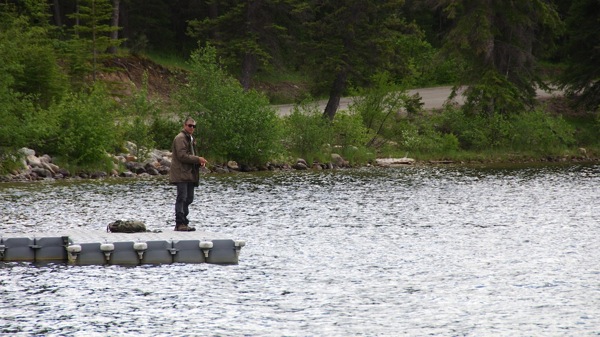 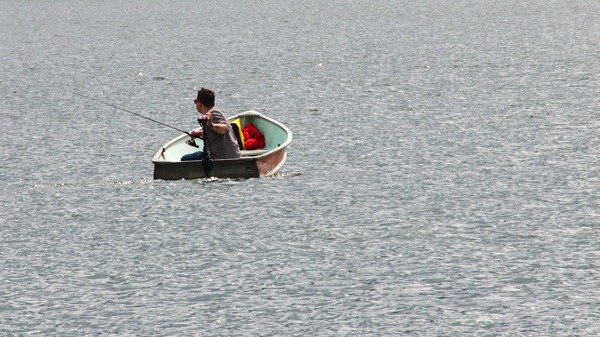 Once we arrived at the far end of Pyramid Lake we walked across the short bridge to the island and hiked around the perimeter trail on the 5 or 6 acre island. Along the way we got a really great view of Pyramid Mountain. This mountain peak is maybe 2 miles from where the photo was taken…starting the climb almost immediately after the shoreline and rises 5,000 feet higher than the level of the lake. It’s pretty much a solid chunk of rock and looking at it we were pretty sure that you ain’t climbing it without equipment as it looks way too steep to hike up. Here are a series of 3 pictures zooming in a bit for each one so you can see the inhospitability of the climb. 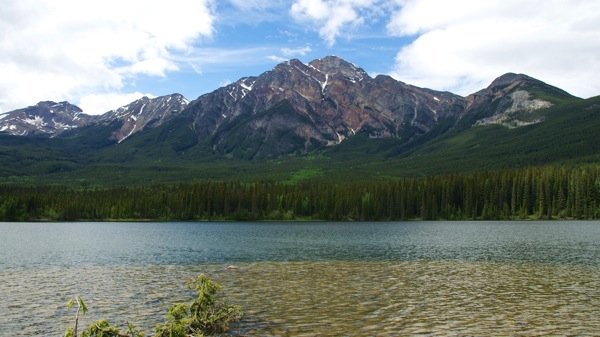 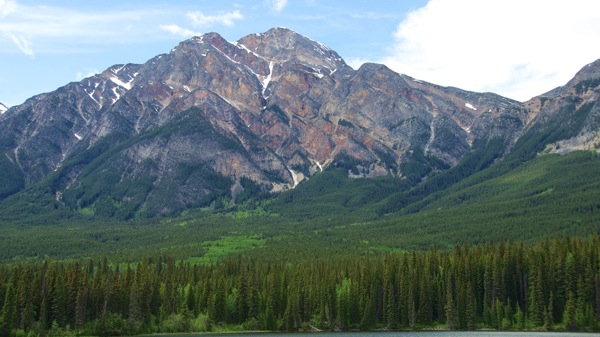 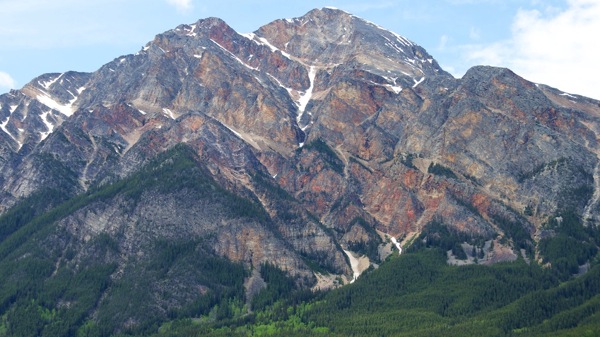 This is one of the two most impressive mountains we’ve seen on our trip west. It isn’t the tallest at only about 8500 feet or so but in terms of the abruptness of the rise and the elevation change over small distances is really almost at the top of the list. As you can see in the first shot it starts rising almost from the edge of the lake for about a mile then essentially goes straight up.

After that we crossed back to the car and went to the Jasper Brewing Company for dinner again; decided to save our leftovers from last night until tomorrow when we’ll be getting ready for a travel day on Friday. Based on a tip we got from a couple of locals who were birdwatching around Annette Lake we decided after dinner to have an evening wildlife safari out towards Maligne Lake again in hopes that more wildlife would be out as the sun started to go down. Our plans were partially successful but since it was only 1800 or so and it doesn’t get fully dark until 2300 it wasn’t quite as nice as we expected. Nonetheless; we did happen across another bull elk with what will truly be a magnificent rack once it gets out of velvet in the fall. This guy would be a trophy bull most places but is protected in the park. 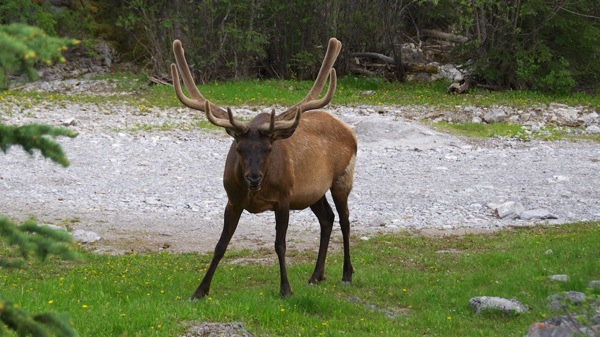 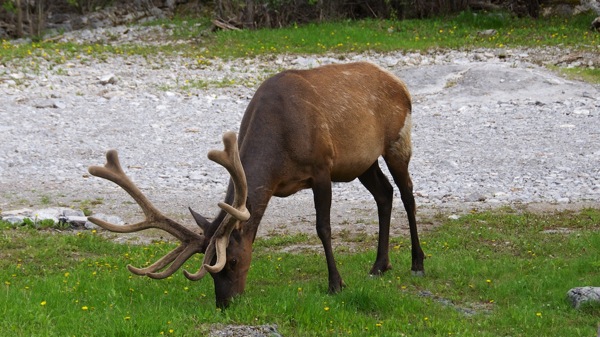 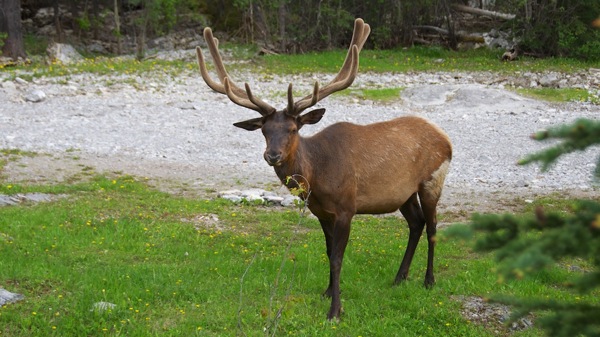 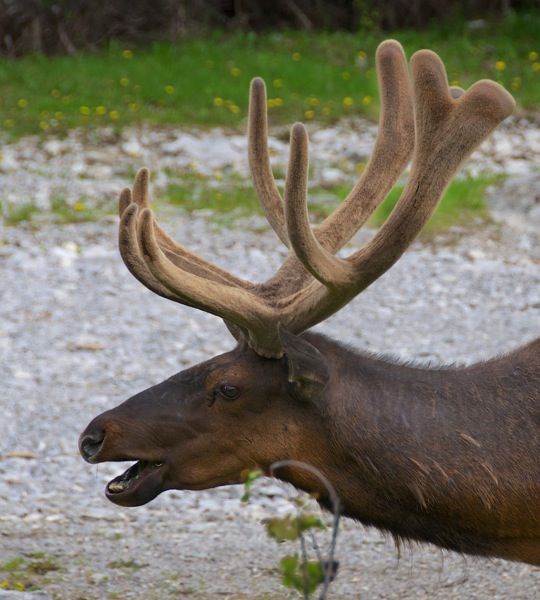 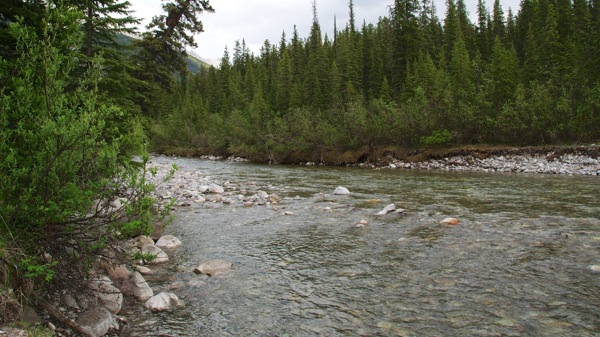 and then noticed this spectacular slot canyon right off the road…it’s about 15 feet wide and probably 200 feet deep. 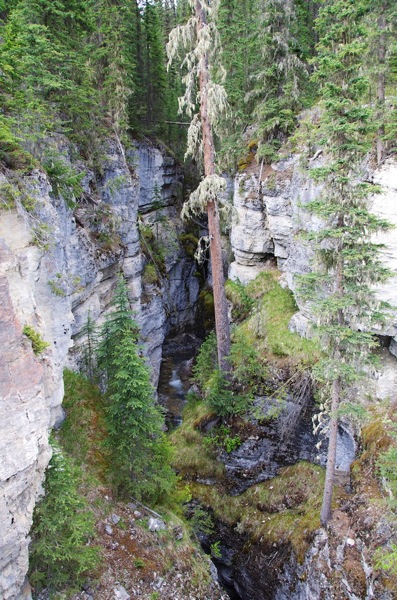 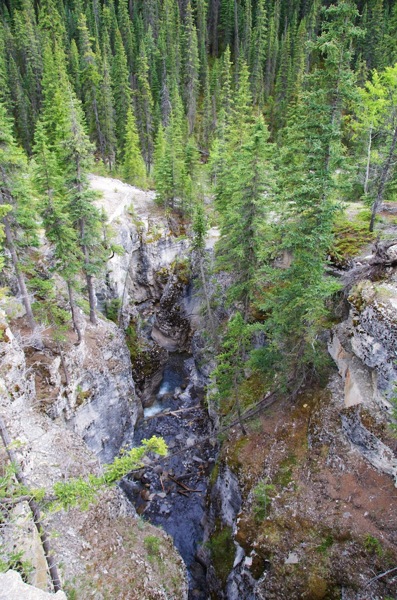 Shortly after we got back onto Highway 16 for the drive back home we spotted the best view of Mount Edith Cavell that we’ve seen…it’s named after a World War I canadian hero (don’t know what she did) and Neil thinks it’s the best looking mountain here. It’s the snow covered one just left of center…all the snow you can see just below the shadow line is actually a glacier that is probably 200 or 300 feet thick ice. I’ll try to get a better picture when we’re a little farther south tomorrow or Friday as we drive to Banff but this is one of the few clear and sunny views we’ve had of this mountain although you can see it from just about anywhere we’ve been in the park. 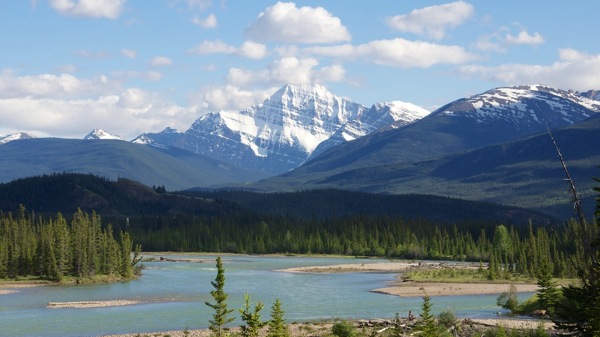 After that we went home and watched some TV until bedtime. Don’t know what’s planned for tomorrow yet…we need to fuel up BAT, get some groceries, and get ready to travel on Friday and Connie also wants to work some more (she’s a bit behind due to lack of convenient internet in Canada)…but if the weather is clear like it’s supposed to be we’ll most likely do something fun as well.