We hemmed and hawed a bit this morning before finally deciding that the weather was going to cooperate enough to get in our planned hike…which was a 3 mile round trip hike from downtown Jasper up to Marjorie Lake and back. The sun kept coming out and in but we finally decided that since this is our last day here to head out anyway. While Connie was hemming and hawing Neil went out and filled BAT with fuel for tomorrow’s travel day.

It took us a bit to find the parking lot as they’re building some new townhouses along the back street in town and the parking lot road was hidden beyond the construction equipment. Once we figured out where to go we parked, donned our hiking shoes, and headed off.

We were hiking along, plodding uphill when about halfway out we came to a complete stop and Connie saying “Uh, oh.”. Neil looked ahead and sure enough; about 20 or so yards up the trail coming our way was a mostly full grown bear. We had been talking enough so it was surely aware of our presence but had it’s head down walking along eating berries. We stopped and talked louder hoping it would leave but it kept coming…at that point we decided that bears had the right of way and headed perpendicular to the trail to the right (uphill) about 20 yards or so. The bear pretty much completely ignored us…walked past us and then exited the trail and headed downhill. We paralleled the trail another 20 or 30 yards then climbed back down…and continued our hike with Neil keeping a careful eye behind us just in case. Sorry, he didn’t get any pictures…he wanted to but Connie was sort of agitated about this encounter so he decided to just calm her down instead.

We hiked the remainder of the way to Marjorie Lake and sat down for a few minutes to have a snack; then grabbed a few photos of the lake and views…it was OK but not as spectacular as others we have seen here and with the overcast, cloudy day was only an OK photo (well, actually 3 photos starting at the left side of the view and traversing to the right). 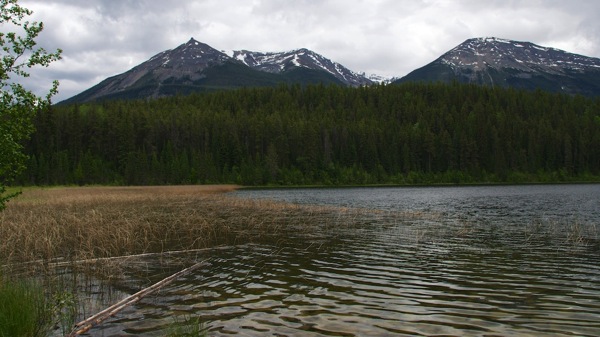 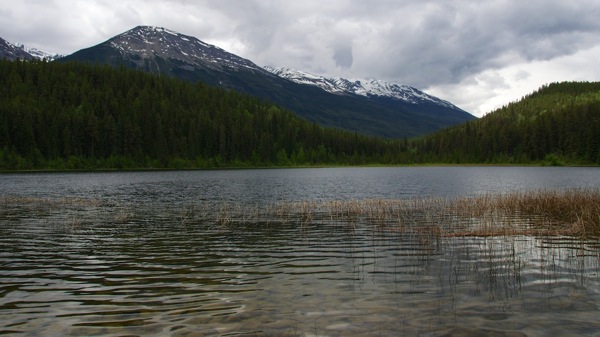 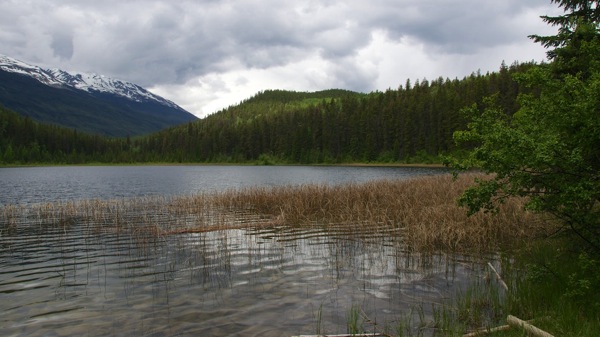 With that we decided to head back down…it was a bit cool today and we left our long sleeved shirts in the car although we did have our rain gear in the backpack so could have donned that if we really needed to.

Connie was paranoid all the way back and was sure that the bear was lying in wait for her…despite Neil’s assurances that the bear had left the trail and headed downhill and that people are not a normal part of a bear’s diet.

Once back to the car we stopped and got some groceries…the selection in the stores is really lousy compared to what we’re used to in the US and the prices are 20 to 25 percent more expensive.

We’ll head off for a beer and some internet in a bit and then home for leftovers for dinner…then we’ll pack up some stuff and get ready to travel tomorrow. We’ve got about 175 miles to go straight down Highway 93, the Icefields Parkway to Banff; our RV parks is actually right next to the hoodoo overlook (hoodoos are stone column shaped things, I’ll grab some pictures while we’re there for you) that we visited on our previous trip to Banff a couple of years back.

Since we had pretty much lousy pictures today Neil went ahead and decided to play with some of them a bitty to enhance the colors and try to make them look more like they did in the wild. First up is a more real looking version of the third Marjorie Lake photo above. This one looks a lot closer to what we actually saw with our eyes than the one above. 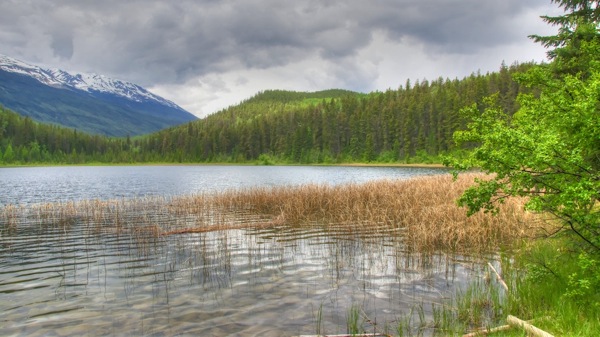 That worked so well that he went ahead and messed around with a couple of the other ones we got earlier in the week. First up; Annette Lake and then Mt Edith Cavell from yesterday. 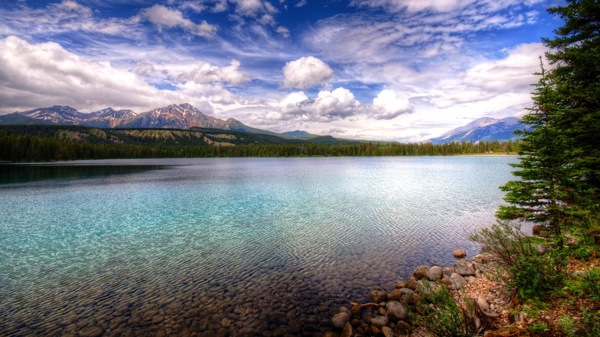 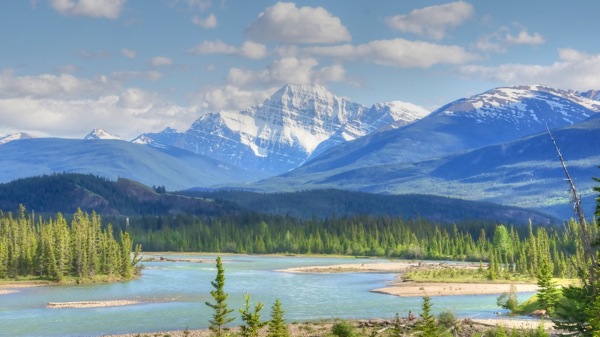 The Athabasca River just upstream of Athabasca Falls from our drive last Tuesday. 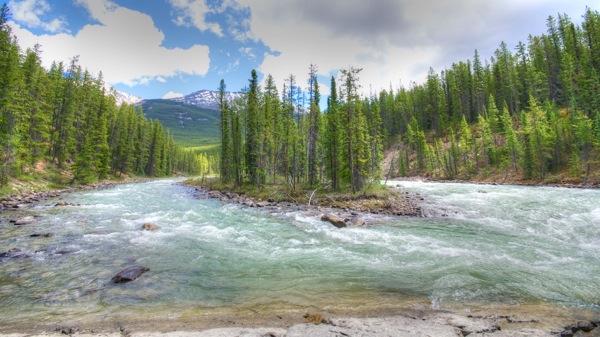 A couple of Medicine Lake from two of our visits there. 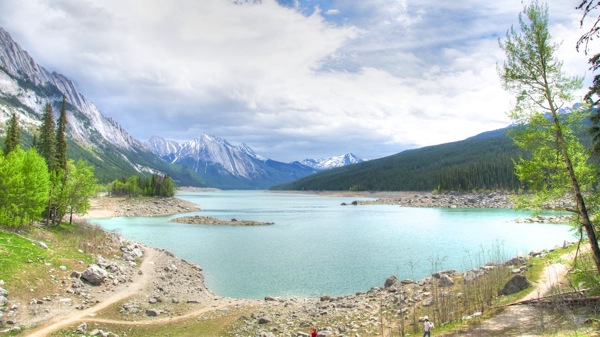 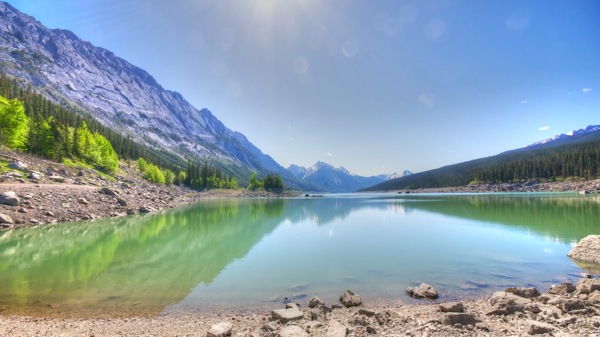 A really nice reflected view of the mountains in Jasper Lake, it was really calm that day and the reflections were like a mirror. 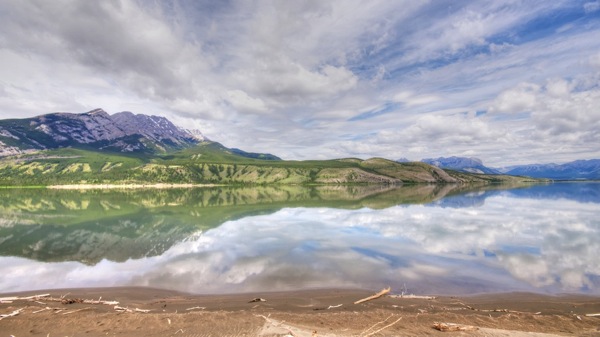 And finally two of the 5 lakes from the Valley of Five Lakes Hike that we took the other day on the rainy day. 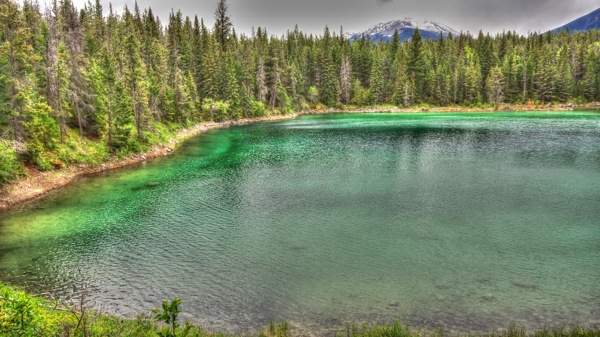 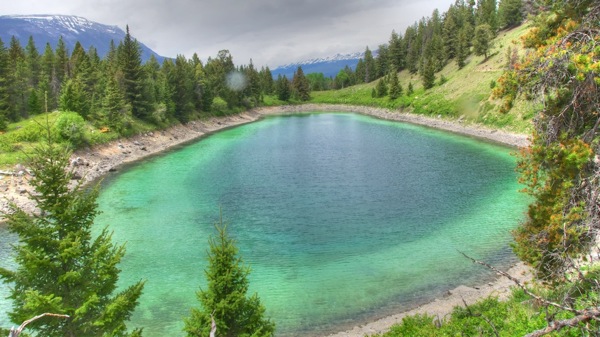 All of those were touched up a bit with some post processing techniques…the net effect is that the colors of the water and the light in the trees looks a lot closer to reality than the original shots we posted. None of them are new; all are the same shots and crops that I put up earlier in the week but he tried to give a better feel for how beautiful the colors actually are since the originals look a little flat compared to reality. These are the neatest green or aqua or blue colors you can imagine. As I previously talked about when I first introduced you to the concept of HDR or High Dymanic Range photography; the eye can see a range of about 11 stops of light (a stop is a quantitive measure of how much light there is)…whereas the camera can only see about 3 stops. Since the eye can see so much more it’s really difficult to get a finished photo to look realistically like the original scene was…it’s easy to make a photo look decent but there’s a difference between decent and realistic. Anyhow; he was bored this evening and wanted to see if he could make some of our shots look better so let us know in the comments how you like them.