Last Day in Branson and Transit to Poplar Bluff MO

We had a pretty good last day in Branson…Connie worked in the morning as she has some students going out on rotation soon and needed to finish up the paperwork, qualifications, and forms for them. Once that was done we had a nice salad for lunch then hopped in the car and drove down to Old Branson; we scored a 2 hours free parking place at 1530 that became totally free at 1600 so we wuz good for the duration. We wandered through the open air mall area near the water front and watched the fountain show; then wandered through the mall a bit more before stopping back at Waxy O’Shea’s Irish Pub for dinner. Neil had Guinness and Connie had Smithwicks (that’s pronounced Schmiddicks for our readers who aren’t Irish or haven’t been across the pond and know the correct pronunciation). Connie’s dinner was a 1 pound loaded baked ‘tater and Neil had a dozen Drunken Shrimp (a fancy shrimp cocktail that was soaked in Pepper Vodka…how could that be a bad thing) and a bowl of Irish soup named Dublin Coddle…this was a soup with bacon, sausage slices, onions, shredded ‘taters, herbs and some non creamy sauce…this was really, really good. In fact, for bar food it was pretty outstanding…decently low calorie, tasty, and not deep fried. We came home and had some French Silk Ice Cream for dessert then hit the sack. We watched the fountain show…it had flame throwers, water jets, and even featured a rainbow in the water droplets falling from the water jets. I’ll post a pic later when Neil has the file server running…I only have the lo resolution file right now.

This morning we hitched up, packed up and hit the road about 0920 or so…we took the alternate route back to highway 65 and skipped going through downtown Branson with the extremely tight turns. Two hundred and twenty miles later we pulled into the Bullwinkle Rustic Campground and Resort…here’s a pic of Connie and Bullwinkle.

After getting parked…the lady at the office gave us strict instructions not to park on the grass…but it turned out the sites were pretty narrow so we had to drive across the grass to get parked…but we didn’t park on it so technically we met her request; anyway; we had a beer and then headed over to Bullwinkle’s Lounge on the property for another beer…they didn’t have draft at all but they did have Newcastle Brown Ale so we were good. After a beer we headed back home and Neil put Connie in jail temporarily…luckily Rocky was there to help save her. 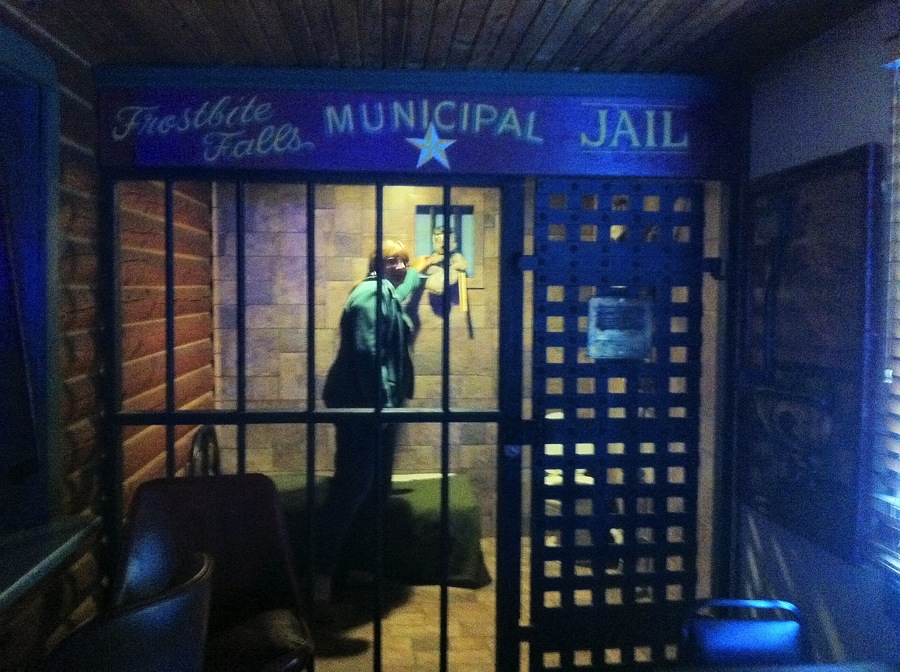 Here’s a shot of our site 5 here at the park…it’s a little cramped and we don’t know exactly how we’ll get out of it tomorrow morning without running over the grass again…but hey, every plan has at least one flaw.

It’s actually a pretty decent little park; small and we are not sure we would want to stay here for an extended stay but it’s great for over night…only about a quarter mile from the  highway. Tomorrow we’ll head out for another 240 mile trip to the Nashville KOA…Neil’s sister Mary Jane is coming over on Sunday with her daughter Lauren. We’ll stay in Nashville through Tuesday then head out early Wednesday morning…310 miles to Auburn AL for an overnight stop and dinner at Country’s BBQ, another 175 miles to Tifton Georgia for a second overnight stop then 195 miles to Cedar Key FL where we are booked at the Low Key Hideaway for a week starting Friday the 25th. On Nov 1 we arrive at Seminole Campground in Fort Myers FL where we’ll be in one spot until Mar 15 next year. We’re really looking forward to some warm weather, eating and drinking at our favorite haunts, getting in some great bike rides, and seeing the herons, egrets, hawks, and ‘gators of southern FL again.

I’ll report in again in a day or two from Nashville. Cyas.……