Another Week in Paradise Drifts on By

Well, still not anything going on down here. It’s been a whole week since I posted…and we’ve done pretty much nothing. Went to Bingo a couple times, grilled some burgers one night and chicken another night, went up to the campfire on Monday evening, worked, bought groceries, did a few minor jobs off the maintenance list but otherwise pretty much did nothing.

I’m blaming the weather…it’s been pretty cool ever since Eagle Sushi night a week or so ago. We had one day yesterday that was warm and great for sitting outside in the recliners but it’s otherwise been cool, windy, and generally not really up to our standards. At least it’s not the sleet/ice/power outages/traffic nightmares that we’ve been seeing on the news. Neil’s brother in Mobile AL and sister in Knoxville TN are stuck with all of that crap. Neil suggested they move down here with the rest of the snowbirds but they’ve got that whole job/work/life thing that’s preventing that brilliant idea from taking root.

Connie was supposed to go on a boat/casino/gambling trip today out into the Gulf  but the wusses that were organizing the trip decided the weather would be too bad so they cancelled it. It’s only going to be in the 60s today and it’s overcast and breezy so it would be a pretty yucky day out on the water I guess. She’s bummed that it got cancelled though.

We went ahead and reserved our site 101 for next winter…we’ll arrive back here on Nov 1 but aren’t leaving until Mar 31. Next summer’s plans are to head back up to the New England area again…since we don’t have to go cross country it’s a lot shorter distance to drive than when we headed up towards Alberta in Canada last year…and we don’t want to get too North too early or else the weather will still be too cold for us. We remember one spring when we still lived in Fairfax VA when there was a foot and a half of snow on the ground on Bryan’s (the human kid) birthday on Mar 11. We ain’t doing that, no sirree not at all…so we’ll just meander out of here on April Fools Day next year and wander slowly northwards so that we get to the DC/MD/VA/PA area around the first of May…we should be safe against winter by that time and then we’ll head on up for more fun in the Northeast.

It hasn’t been a decent enough day on a non work day for Connie to get out and do any Fun Stuff© and get great pictures. However, the weather is supposed to improve some starting next week so hopefully we’ll get to pick a day and take an early morning run out to Shark Valley for a bike ride and some pictures. Corkscrew is closer but there aren’t very many wood storks there anymore…but we did get some other good bird pics last year so maybe we’ll head out down there instead. In the meantime; here are a couple of shots from last year’s visit to Corkscrew.

A female Anhinga followed by a male with his brown head/neck feathers. 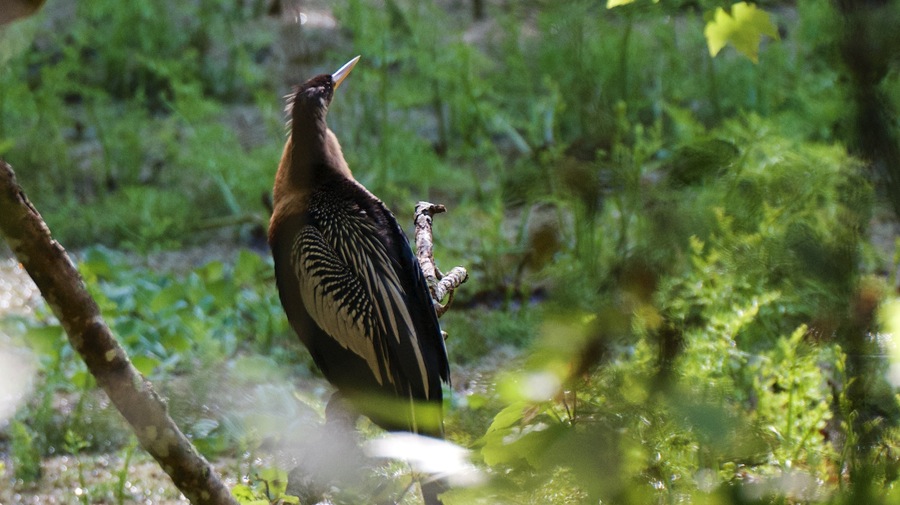 A Red Shouldered Hawk and then a shot of a mother raccoon followed by a raccoon family portrait.

That’s about it for today…mostly I just wanted to post and let ya’ll know that we’re still alive, have survived the Polar Vortex, and are really, really hoping the snow doesn’t make it this far south.