After our dinner at Bowen’s Island Restaurant Friday we pretty much just stayed home on Saturday since it was raining. Sunday we got up early for 0730 Mass at the local parish and then after lunch headed off to visit the restoration site of the CSS Hunley.

The Hunley was the submarine that conducted the first successful attack on an enemy warship on Feb 17, 1864…but never returned from it’s mission. Here’s the story in case you’re not familiar with it.

The Hunley was a submarine 44 feet long, 3 feet wide and 5 feet tall…it was built in Mobile AL in 1862 and sent via rail to Charleston where General Beauregard was trying to break the Union blockade of Charleston. The Hunley sank 3 times during development…killing it’s crew of 8 each time. Undeterred, Charles Dixon convinced the general to let him try once more and with an all volunteer crew set out on the evening of Feb 17 to attack the USS Housatonic which was the largest and most successful ironclad in the Union Navy. The Hunley approached with 150 feet before being seen and rammed their torpedo (on a spar sticking 16 feet out the front of the submarine) into the aft starboard quarter of the Housatonic just ahead of her screw. The torpedo had 135 pounds of black powder which…unfortunately…set off the main magazine of the target as it was located directly inboard of the warhead detonation point. The resulting explosion tore the entire stern of the Housatonic off and she sank in 3 minutes.

The Hunley failed to return to port which was to the Northwest of the point where the Housatonic on the north end of the Isle of Palms at Breeches Inlet. Several contemporary reports indicated that signals were seen from the Hunley after the blast but the submarine was not seen again.

After years of searching, in 1995 an investigation team from the National Underwater and Maritime Association (NUMA) led by the author Clive Cussler (of Dirk Pitt novels fame) found the Hunley about 1000 feet southeast of where the Housatonic sank (i.e., further to seaward and the opposite direction from where the Hunley was intending to return to port.

The Hunley was salvaged in 2000 and has been essentially in a large tank of water at the former Charleston Naval shipyard ever since undergoing preservation. It’s been drained and some preliminary investigation done including recovery of the crew’s remains for burial but is still in a fresh water bath working on cleaning the accretion deposits off of the hull. The fresh water will be replaced by a sodium hydroxide solution for probably a year or so to soften the final layers of accretion. At that point it will be carefully scraped clean and restoration will begin. The entire process is expected to take another 5 to 7 years…at which point the restored vessel will go on display.

So…what happened that caused the Hunley to sink? Truth is…nobody knows. Although there were some contemporary reports of the Hunley signaling with a blue lantern as expected so that signal fires could be lit to guide it back to port there are precious few facts. Here’s what is known.

So…from an engineering standpoint Neil thinks it is unlikely that they survived the original blast and that the contemporary reports were incorrect. Most likely…the crew was disabled by the blast which resulted in them remaining at their stations. The blast likely also opened some of the seams in the hull…otherwise it would not have been full of sand as the hatches were intact and sealed. The ship then gradually sank to the bottom…the tide in the area at the time would have carried it towards the southeast to where it was found. After coming to rest on the bottom the hull filled with water and the crew perished. Within 20 years or so the hull was covered by sand. This sand caused an anaerobic environment which helped preserve the hull. Salvage efforts immediately after the Civil War were concentrated at the attack point and between it and the end of the Isle of Palms to the northwest of the attack point…which meant that they were looking in the wrong place. As I said…this is just conjecture…but it fits what few facts are known. The only sticking point was the contemporary reports…but since there was more than one of those from both Union and Confederate sides…that tends to give the reports a little more credence. Who knows…it’s just one of those mysteries of the sea.

The ship was essentially found by accident…most of the NUMA crew had lost interest and headed home including Mr. Cussler but the skeleton crew on the search boat just happened to be southeast of the Housatonic wreck site…got a hit on the magnetometer…and dove down 28 feet, digging out the sand and found the Hunley.

Anyway…we did get a few pictures. Here’s a photo of the Hunley shortly after it was raised.

Here’s a shot of Connie inside a life size cross section of the hull cranking away on the main engine crankshaft (the Hunley was human powered).

Finally…the only shot we could get of the Hunley itself. Sorry about the poor quality but we couldn’t get inside the glass partition. The end to the right of the picture is the stern.

With that we headed home.

Monday we headed off for a hike at the Old Santee Canal State Park. The Santee Canal connected the Cooper River (which leads down to Charleston on the coast) with the other river systems in South Carolina and allowed river commerce to the interior of the state. We had a nice 2.5 mile or so hike and did get a few nice shots along the way. 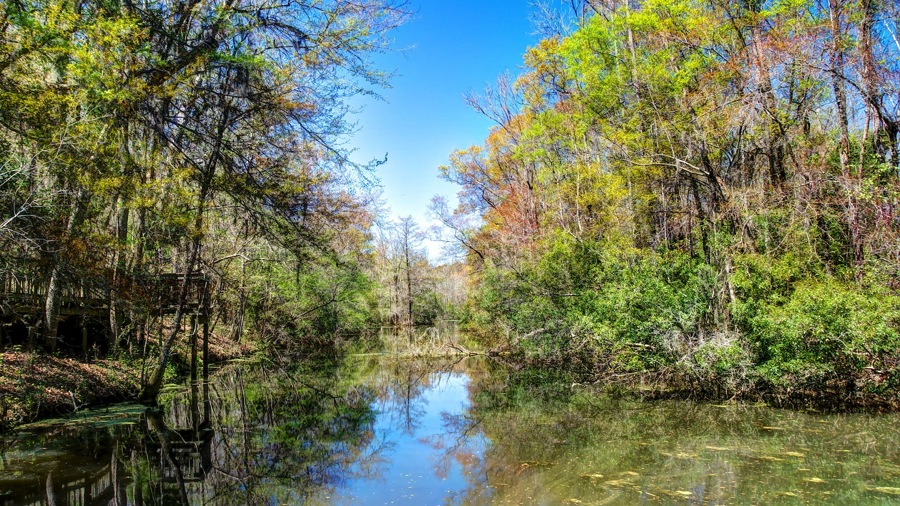 Just across the way a bit is the Cooper River.

Along with some white lily like flowers we spotted and a couple of turtles sunning themselves on logs.

We also spotted our lone bird sighting of the day…this is a Great Horned Owl which is roosting on an abandoned Osprey nest.

After our hike we came home and had a shower then went off for dinner at High Cotton…our other favorite restaurant in Charleston. The food was superb as usual…grilled Tilefish for Connie and Steak with Crab Stuffed Bacon Wrapped Shrimp for Neil. We had a couple of pints of locally brewed stout to go with it an all was wonderful. After dinner we did get a couple of shots of downtown Charleston by request of Neil’s baby sister.

The Four Corners of Law…both a panorama and a shot of the church on the diagonal corner.

A shot of a gaslight lamp (Connie got this out the car window while Neil walked up and got the shots above).

And finally a couple of panoramas of The Battery area. One of Battery Park itself and the other looking out over the water. You can just barely see Fort Sumter where the first shots of the war were fired…it’s towards the left side of the water panorama right at the left end of the tree line you can see…the trees are actually on the far shore a couple miles past the fort.

With that we headed home and called it a day.

Tomorrow and Wednesday are more hikes, Thursday is pack/grocery day and Friday we’re off on a 2 day transit up to the DC area.