Hanging out in Chesterfield VA

We’ve had a pretty uneventful week so far here at site 103, Pocahontas State Park Campground in Chesterfield VA. After arriving here last Monday following a short 2 hour drive…we then spent another hour and a half or so trying to flush our gray tank enough to get whatever is stuck to the side causing our level indicator to read inaccurately unstuck. We had dumped and flushed a couple times before we left Bull Run and traveled with 25 or so gallons in the tank along with some Calgon hoping the sloshing would help clean the tank sides.

That scrub and another half a dozen full and partial flushes made some improvement in the problem…Neil will give it a try next week when we’re at Sevierville for the rally and see if he can get it sorted out the rest of the way.

Anyway…Connie was pretty busy working last week, it rained 2 days, and we did laundry one day…not to mention it was pretty cool, damp, and overcast most of the week…so we didn’t do much fun. We did get out to Rockwood Park nearby on Friday and had a nice 2.5 mile hike out and around a private lake and through the woods. We could hear plenty of birds around us but were only able to get photos of a few…most of them were what we have come to refer to as “taunting birds”…they just sit in the trees and make noise just to taunt you since they know you can’t actually see them. Luck was on our side slightly though…as most of the trees don’t really have many leaves yet so we were able to spot some chickadees…although the little varmints would never stay still long enough to focus and get a picture while simultaneously being close enough to not be just a dot in the picture and not obscured by branches.

Anyway; a few photos we did get…the first two are of the Bluebells up at Bull Run Park…they’re supposed to be the big draw for flora in the park and the Bluebell Walk was held the weekend we were there but none of them had bloomed for the walk. We spotted a patch of them in a (sorta) sunlit area on the way out and got a couple of pics. 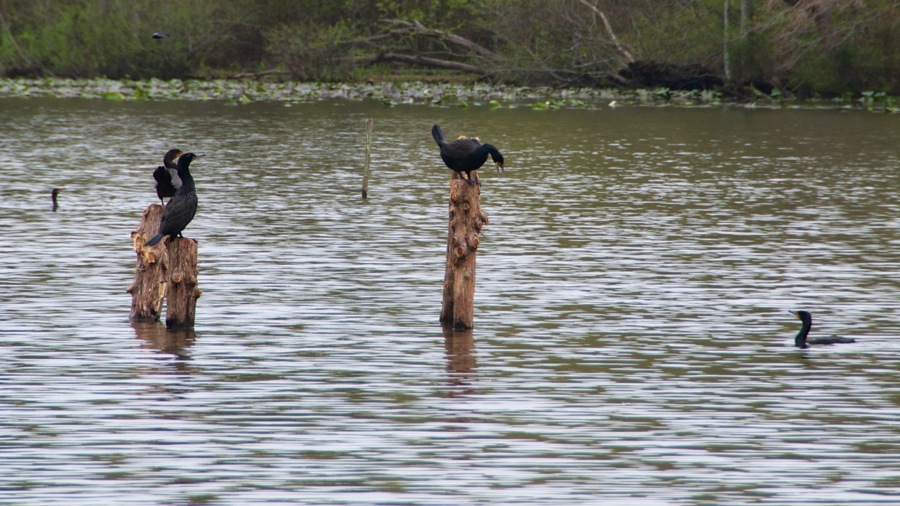 followed by some turtles sunning themselves out on the logs near the shore…Neil had to crawl out a bit on a fallen log to get this shot but at least he didn’t have to get out over the water.

Heading away from the lake we spotted a blooming dogwood…the flowers are known as the Wounds of Christ from back in the middle ages…the flower sort of forms a cross with dark areas out at the tips of the petals for the wounds and the stamens forming a crown of thorns in the center. The wikipedia page also claims that dogwoods were much larger back in the day and that the crucifix was made from a dogwood…but we’re calling BS on that one as we’ve never heard of a dogwood being that large and there isn’t any justification given for this claim.

Heading further in the woods we spotted a male Scarlet Tanager chasing a female…it is breeding season ya’ know…and they kept flitting around us. We got one halfway decent picture of them when they landed in a tree overhead but otherwise we could hear them and see them but not close enough or unblocked by trees enough for a shot (we didn’t have the big lens anyway).

Finally we spotted a gray squirrel who posed nicely for us on top of a log.

We also heard (and briefly saw as he flew overhead…well, Neil saw him anyway but Connie didn’t turn around fast enough) a Pileated Woodpecker (that’s the Woody Woodpecker kind…although the actual call doesn’t sound anything like Woody does). Didn’t get a picture of it though as it was a 2 second glimpse overhead…barely long enough to identify it.

Saturday was a pretty nice day but Connie had to work on an article for ASCLS Today so she did that and Neil went on a bike ride. Sunday was Easter and was a beautiful day…we sat outside in the chair for awhile and then the human kids (and beagle Betty) came over for dinner…we had grilled chicken with some Italian dressing/mustard/BBQ sauce/honey sauce that Neil made up. After that we had some brownies with pecans, butterscotch chips and white chocolate chips in them and salted caramel topping…both were a hit all around. The kids left around 2100 since Jen had to go back to work tomorrow and then we just watched TV until bedtime.

Today we’re off for another hike…again it’s a beautiful sunshiny day so hopefully we’ll get some good shots along the way.

2 Responses to Hanging out in Chesterfield VA