We had a really good hike yesterday. After breakfast and coffee we lazed around until almost noon then headed out about 15 miles east to the Dutch Gap Conservation Area. This is a wildlife management area that is bordered on one side by a state park that has some reconstructed Indian dwellings in it and on the other side by a Virginia Power generating plant and the James River. For part of the hike we were hiking along just below the dike that surrounds the fly ash pit for the power plant…this is where the dump the ash from the coal burning facility. While walking along the dike at the beginning of the hike we got to talking about the coal cars we saw on the way past the plant to the conservation area and got to wondering how much coal a generating station like this one used…so today Neil did some rough engineering calculations for the plant after googling to see what it’s generating capacity was. Turns out it’s the largest single generating station owned by Dominion Power and produces 1650 MW of power (about 12 percent of the Dominion total) of which about 1200 MW or so is coal fired with the remaining being oil/natural gas fired. After another quick google to figure out the number of BTUs in a ton of coal, how much coal fit in a railroad car, and the conversion factor from MW to BTU/hour…he figured on a plant efficiency of about 20 percent and crunched the numbers…coming up with about 180 railroad car loads of coal per day assuming continuous maximum power operation. We watched some dump trucks hauling off the ash as we finished the hike and counted 4 truck loads in about 10 or 11 minutes…some more quick guesswork calculations on total ash per day gave him a pretty good feeling about his estimate. So the answer is a large coal station uses about 180 railroad cars of coal per day give or take a couple of dozen…he knew when he started that it would only be a guess since minor variations in efficiency and the other numbers in the calculation  make a difference. We were really only interested in an order of magnitude sort of answer anyway so 180 is an in the ballpark number. Ok, enough engineering talk…back to hike talk.

After parking at the state park visitor center we had a picnic before we set out on what turned out to be almost 5.2 miles of hiking. Luckily it was all pretty flat and reasonably graded so it wasn’t hard hiking…well, except for this bridge we had to walk over that creaked under us and gave Connie the heebie jeebies. Neil tried to tell her that the load limit for the bridge was 1.5 tons and while she might be a couple pounds more than optimum she was nowhere near 1.5 tons…but it didn’t make her feel any better. He then tried to tell her it was just the bridge deck (wooden boards) shifting slightly in their brackets but she didn’t like that either.

Anyhoo…shortly after we started we spotted a mockingbird (didn’t bother with a picture of it), then a couple of geese and a bird of prey of some sort…we can’t decide if it is an Osprey or an immature Red Tailed Hawk…the pattern looks more like that of an Osprey but the colors are off for that and more closely resemble the Red Tailed…but it wasn’t really close enough to get a decent enough picture for an exact identification. If I had to guess I would guess it was more likely to be an Osprey since we saw several other Ospreys while we were on the hike. We also got a shot of what we think is a female Baltimore Oriole…but again didn’t have a good enough shot to really be sure. 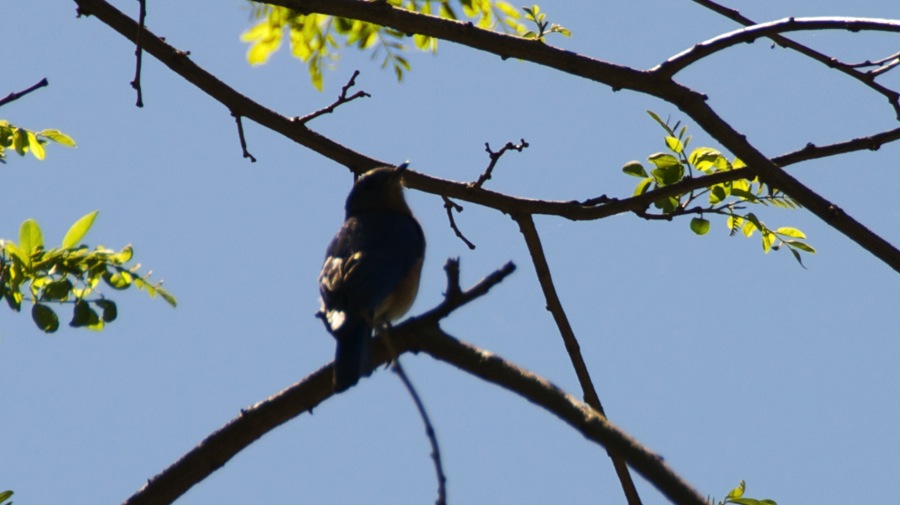 We turned of of the dike path into the woods and across the dikes surrounding all the ponds and then crossed the aforementioned scary bridge. Looking back Neil spotted another Osprey (we’re sure about this one as we got out the big lens for better pictures) so we got a few nice photos of it.

Here’s a shot of the path we walked on…almost all of it was like this…followed by a couple shots of one of the lakes as well as a sunk boat in an area known as the graveyard. We have no idea why there are a bunch of sunk boats in the lake. 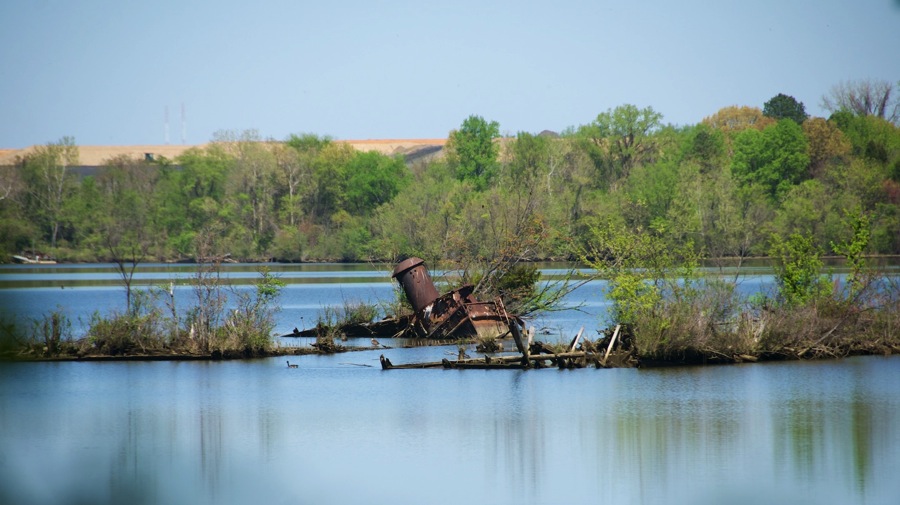 Finally, right towards the end of the hike (just before we turned back down the path next to the dike to return to the parking lot) we spotted another set of 4 geese that were nicely grouped for a photo.

We also heard and spotted a total of 4 Prothonotary Warblers which are fairly common in wetland areas but are usually pretty hard to actually spot as they hide in the grass and foliage. Unfortunately…although we did spot them we were not able to get a picture as they were mostly obscured by foliage even the couple that were within 10 feet of us. So, I found a picture of one on the internet for you.

They’re really brightly colored and one would think they would be easy to spot but they’re only 4 or 5 inches long and like to stay close to the ground in grass/twigs/shrubs and they’re just hard to see. We were happy to spot them even though we got no pictures.

Afterwards we came home and had a shower then ate leftover chicken and sweet taters from our dinner with Bryan and Jen on Sunday…then watched TV until bedtime. This morning we decided to go up and dump our gray tank as it was full and it’s supposed to rain later. That killed a couple of hours by the time we stowed a bit, disconnected utilities, drove up and dumped and then parked/reconnected everything. After that it was lunch and Connie’s doing some work…trying to get the IT guys at the college to make her ‘upgraded’ Windows 7 laptop work and connect as well as the old XP one did.

Chili for dinner, and tomorrow Connie is driving up to the college to meet more students…Neil will pay bills and such while she’s gone. We’ve got another hike planned for Thursday and then laundry on Friday and head out for the rally in Sevierville on Saturday.