Today’s Fun Stuff© was a short drive about 20 miles over to the Cold Harbor Battlefield over on the east side of Richmond. This was the site of 2 battles during the Civil War. The first one was in 1862 during what has become known as the Seven Days Battles. Since Richmond was the capital of the Confederacy the Union troops knew that if they could capture the city it would most likely end the war; so in the spring of 1862 the Union army conducted a five month campaign trying to take the city. They landed at the southern of the Chesapeake peninsula and advanced northwest toward Richmond then turned west towards the city. During the first big battle east of the city the Confederate commander was wounded and replaced by Robert E. Lee. Lee then led a series of counterattacks known as the Seven Days Battles that forced the Federal army to the south and then east away from Richmond which resulted in the failure of the campaign. The heaviest fighting during the battle took place on June 27 when Confederate troops repeatedly assaulted the Union lines near Gaines Mill about a mile or two from Cold Harbor (the town is named after the Cold Harbor Ale House which was the an early bar in the area). Total Union and Confederate casualties were over 15,000 for this one day…largely due to the fact that the trench warfare of the later Civll War hadn’t been invented yet…at this point in the war the battles still consisted of lines of troops facing each other in the field and not of one line assaulting the other which was in a defensive position. After the Seven Days Battle…which was largely a victory for the Confederate side as it kept Richmond from being occupied…the retention of Fort Darling by the South on the bluffs overlooking the James River meant that Richmond was protected from waterborne assault for the duration of the war.

In the spring of 1864 the Union again decided to try and capture Richmond…but this time instead of approaching from the coast to the east they crossed the James River northwest of the city about 120 miles almost directly west of Spotsylvania. There then commenced a series of running battles in which the Union forces tried to get to Richmond and they kept being blocked by Confederate forces in a leapfrog pattern towards the southeast until they were east or Richmond near Cold Harbor…very near to the site of the previous battle at Gaines Mill.

The first battle was in early May and is known as the Battle in the Wilderness…we previously visited that area a couple of years ago during our test RV trip before we decided to go full-time. The Wilderness is literally in the woods today and was actually woods back then…we were amazed back then by the fact that for many portions of the battle there were Union and Confederate troops within several hundred yards of each other with neither being aware of the presence of the other. The battle was fought as a large number of small skirmishes which eventually resulted in General Grant taking his Army of the Potomac southeast to try and get around the Confederate forces. Here’s a map of the 1864 Campaign; the Wilderness  battle took place May 5-7 at the northwest corner of the map. Confederate forces are in red, Union in blue.

Following the Wilderness…Grant repositioned to the south and there were a series of further battles at Spotsylvania, Hanover Junction and Mechanicsville before the largest battles of the campaign at Cold Harbor…this was the site we visited today. At Cold Harbor the Confederate forces had dug in along a seven mile stretch of earthen trench works to block the Union advance; today’s 1 mile hike through the battlefield was largely a trip through the remains of these defense works…which are just about the best preserved battle trenches we have seen on our travels.

One thing that is inaccurate about the pictures from today though…back during the war the wooded areas were largely non existent and all of the land the battle took place in was rolling farmland with open fields.

Our tour started near the center of the Confederate lines near the site where Gear’s battalion of artillery was setup. This 8 pounder is very similar to those that were setup here and looks out over a portion of the battlefield that was left in it’s original state of pastureland. The shot of the fieldpiece is looking north along the general line of the Confederate fortifications…the next image of the area the Union troops attacked through is a 90 degree right turn right after the shot of the artillery. You can’t see it very well in the picture; but the far side of the field is about a quarter mile away and the valley in the middle between the Confederate lines where we are standing and the Union lines to the east is about 30 or 40 feet deep. 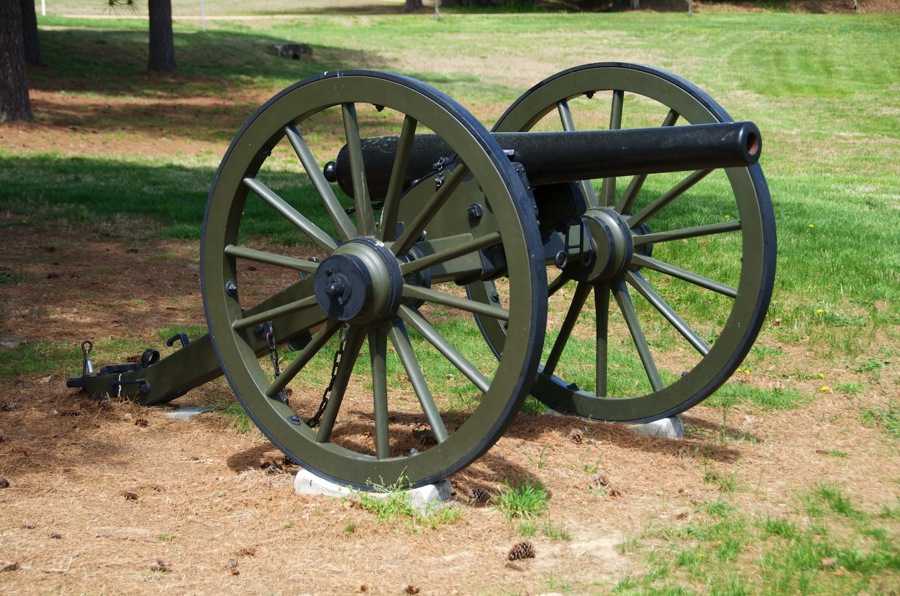 From this point we crossed the field to the tree line on the far side using the mown path on the right side of the frame then entered the woods behind the Union lines. We then turned to the left and meandered through the lines that part of the battle was fought in. Today these are all in the woods. The well preserved entrenchments that are depicted at the end of the post are a quarter mile or so to the left along the Confederate lines from where this was taken, they are in the background out of sight in the shot of the field piece.

The first set of trenches we encountered are in the photo below…although they have largely eroded. You can just see the remnants of the trench running from upper right to lower left. These are located just about 200 feet into the woods at the end of the mown path in the field photo above.

before coming across the best preserved area of them. By this time we had completed about 3/4 of a large counter clockwise circle around the open field from the photo back after the field piece shot and are about 1/4 mile north of the location of the field piece. From this location we went another 100 yards or so and then got this panoramic view of the well preserved trenches and area towards the Union lines.

Referring to the picture above…and remember that none of this had any trees 150 years ago. This is about a 90 degree field of view…on the far right you’re looking south towards where the field piece is displayed, it would easily be visible except for the trees. Looking left in the image by the time you get over to the large tree near the left side you’re looking almost due east towards the Union lines…you can just make out the area of their lines about at the horizon level in the distance. With none of the trees in place, and with the Union lines being maybe 100 feet lower than the Confederate lines at this point the Union forces were facing a seriously dangerous charge across open lines towards thousands of entrenched Confederate troops with artillery support…which meant they would be slaughtered if they attacked.

Here is another shot from behind the Confederate trenches looking towards the open field and Union lines. The field you see in the rear is the same open field previously viewed from the field position which is just out of the frame to the right here.

Nonetheless; on June 2 the Union forces tried a small attack against a gap in the Confederate lines a little to the north of this location. They were partially successful in that they captured a portion of the trench system before being driven back by Confederate reinforcements. This partial success led General Grant to try a large scale attack on June 3 as he was emboldened by his near success…but it was not quite at this point where he decided to attack. The actual attack took place further to the north from this part of the lines maybe a quarter mile or so.

For this part of the tour we hopped into the car and drove over to the area of the Confederate lines where the attack was centered. Here’s a view from immediately behind the Confederate fortifications looking east. 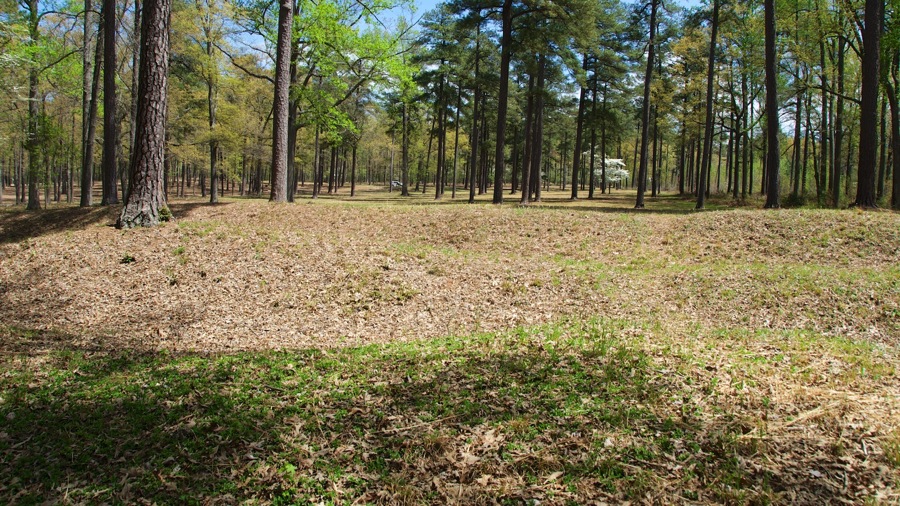 You can’t really tell it from these shots but these berms are about 10 feet high and the land generally falls off about 20 or so feet by the time you get to the far side of the field. If you can see the small white car a little bit left of center here…that’s the center of the Union lines and the next shot shows the view from that perspective looking west. 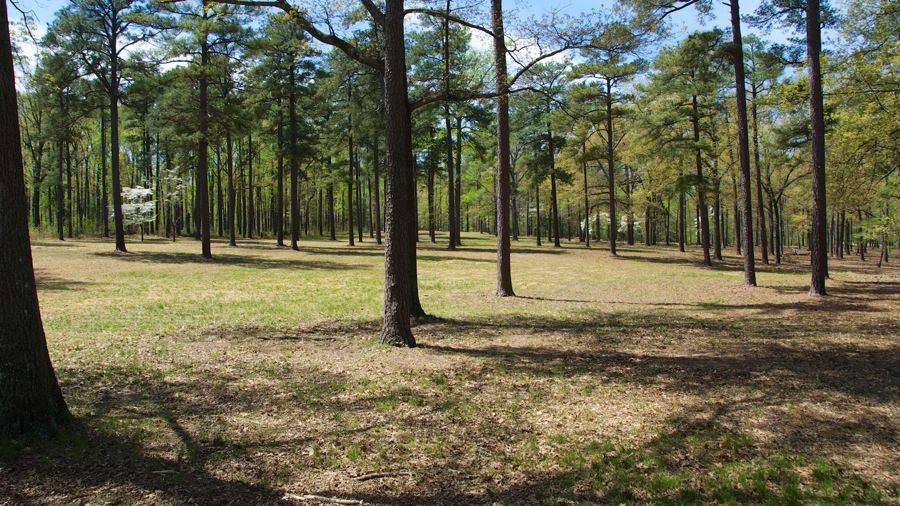 Sorry there’s not a convenient car for this last shot taken from the Union side of the line…but the previous shot was taken from just about the center of this shot looking west back toward the Confederate trenches. Remember that all of this was open pastureland and farmland 150 years ago and the Union forces attacked across about a 500 yard cleared area going uphill towards the Confederate lines. The attack started about 0600 on June 3 when General Grant sent 3 Corps ahead across a 3 mile front centered at this location. As one can guess…attacking across open ground toward entrenched forces supported by artillery required extreme courage…but they were slaughtered nonetheless. By the time the attack failed and Union forces retreated to their fortifications immediately behind where this shot was taken from (sorry, no shots of the Union trenches but they were similar to the Confederate ones except are almost entirely eroded away) at 1200 they lost almost 6,000 men.

This was the last of the major skirmishes at Cold Harbor; the troops on both sides occupied their trenches until June 12 at which point General Grant leapfrogged to the south again. They crossed the James River and were again stymied on the east side of Petersburg from being able to attack Richmond which is directly north of Petersburg.

Unfortunately for General Lee…although successful in defending Richmond…General Grant’s arrival at Petersburg was the beginning of the end of the war. Once he was entrenched east of Petersburg, he had both the port of Hopewell on the James River available for resupply, rearming, and reinforcements and over the next several months just had a stalemate with General Lee while growing a more powerful army. He kept attacking and eventually occupied Petersburg in March 1865 and then Richmond in April. At this point…Lee’s outnumbered and outgunned army started a retreat northwest along the James River in an attempt to join forces with General Johnston’s army. He was harried up the James River by Grant’s forces and eventually cut off and surrendered at Appomattox in April 1865…thus ending the war as General Lee’s army was the last remaining Confederate force.

So…that’s the end of today’s history lesson. From being on the ground one can see how difficult the fighting was in this part of Virginia during the war…and visiting the various battle sites gives you a much better perspective on the battles and overall war progress then reading about it in dry history texts. There are several other battlefields from the time here in the Richmond area…we’re out of time now but will visit some more of them on our next visit here to see their human kids.

Tomorrow is laundry and seeing those human kids as well as packing for our departure. Saturday we’re off to Fairfax for Neil’s eye appointment then back here to pick up the house and head off on our two day drive to Sevierville TN for the RV-Dreams Rally.