Friday she worked in the early morning then about 1000 or so we headed off for a trip to the Wayne County Historical Society Museum which was free. We had about a 2 hour tour by a delightful little old lady whose name and picture we completely forgot so that she could have a couple of minutes of internet fame…we’ll endeavor to do better about that in the future.

Anyway…the museum is in Monticello, KY right on the main drag and has your typical small town America collection of local artifacts, famous people, and famous things. Included was a diorama of the Civil War battle at the Mill Springs Mill. This was a relatively minor battle in January 1862…part of the campaign that ultimately ended in the really big battle at Shiloh in Tennessee in April of 1862. Total casualties were 164 killed and 611 wounded. Confederate General Zollicoffer was defending the Cumberland Gap at the mill site on the Columbia River and decided rather than waiting for the enemy to attack he sortied westward about 8 miles during the overnight hours and attacked the Union forces at dawn near Logan’s Crossroads about 8 miles west of his encampment at the mill. He thought he had a numerically superior force but Union General Thomas had received reinforcements the day before and despite initial success the Federals carried the day and had the first significant Union victory in the war. I’ve got some shots of the mill site in a bit but since the dam was constructed back in 1952 the landscape is different than it was back during the war. Back then the Confederate forces went downhill from the mill and crossed the river on a steam boat but today the lake comes almost up to the bottom of the mill site.

There were two other really neat things about the museum beyond all the typical local history stuff. The first was the stagecoach from the old Burnside-Monticello stage route. The closest train stop was about 12 miles east of Monticello in Burnside and the stage cost $1.50 for the trip all the way to the end of the line in Monticello. Neil grabbed a shot of Connie leaning out the window of the coach acting like she was on the road back in the day. The owner of the coach signed a contract with the Postal Service for 1 cent per year to carry the mail…because back in those days the bad guys were much less likely to rob a stagecoach carrying mail as that would become a federal offense and result in greater law enforcement attention to the robbery…so the robbers stuck with non mail carrying stagecoaches. 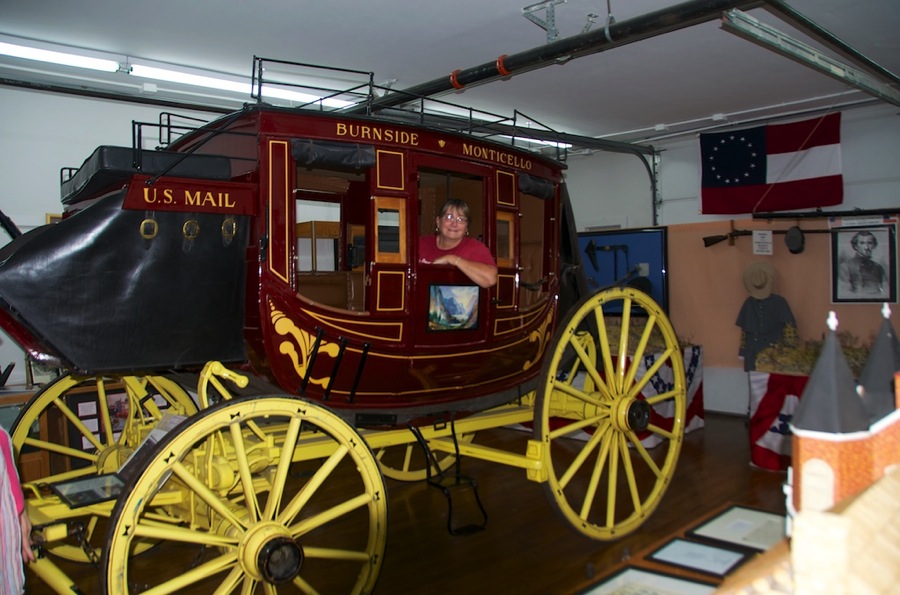 The other neat thing about the museum is the built in cave system. The museum is housed in what used to be the main hotel in Monticello and back in the early 1900s when it was built the owner uncovered a cave system underneath the basement while excavating for the foundations. There’s a straight down drop of about 75 feet and the owners put some fans down there and left a hole in the basement so that the cool underground air came up and cooled the entire hotel…he claimed it was the first air conditioned hotel in the state. I thought we had gotten a picture down the hole…but apparently I was mistook since it wasn’t on the camera card (that’s two oversights in the same museum trip, drats).

Another interesting thing we found out is that (again, according to the museum) the first oil well in the United States was drilled in Wayne County, KY…and not in Titusville, PA as you’ve always heard. While the well in Titusville was the first oil well that was actually dug as an oil well…the first well to find and produce oil was drilled in 1815 in Wayne County. This well was actually drilled as a salt well…the intent was to drill down to brine and extract it…then boil down the brine to produce salt. They drilled down to a level of 283 feet where they discovered that the salt brine was contaminated by oil so they abandoned the well. Drilling again for salt in 1818 in another location in Wayne County they produced about 100 barrels per day that poured into the Cumberland River. At this time…oil was considered useless and wells were the money making mineral that people drilled for…so again this well was abandoned. The well in Titusville wasn’t drilled until about 40 years later in 1859. So…why doesn’t Wayne County get the credit? Simple…oil was considered useless and while the owners barreled the oil and sold it as liniment for a few years the well was abandoned in the 1029s. By the time 1959 rolled around people knew that oil was worth something and had been getting it from natural seeps for 20 or 30 years…Titusville was just the first successful “Looking for oil on purpose” well.

After the tour we skipped the one room schoolhouse out the back of the museum since we were hungry and after a quick stop at the Golden Arches for lunch headed off to the mill site at Mill Springs. There are a total of 7 naturally running springs up on the hills above the Cumberland and the mill was built to take advantage of the plentiful water flow. They builders constructed the largest in the world (at least that’s the claim) over the top mill wheel and used the power to grind corn which was one of the major crops in the area at the time. Here is a shot out over Cumberland Lake from right next to the mill…the old river was just about in the center of the lake that you can see. For a sense of scale…the lake is about a third of a mile wide here and about 200 feet deep in the center. The old river channel runs from upper right to lower left down the axis of the lake. Following that are a couple of shots of the spring flow down the hill and then the mill itself. I’m guessing the spring flow is in the 200-300 gallons a minute range; the stream in the second fall photo is right below where the mill suction pipe tapped off and it’s about 18-20 feet wide at that point and maybe 2 feet deep. The mill stone is about 4 feet in diameter and 18 inches thick so it took a pretty decent water flow to turn it on top of the matching fixed stone. 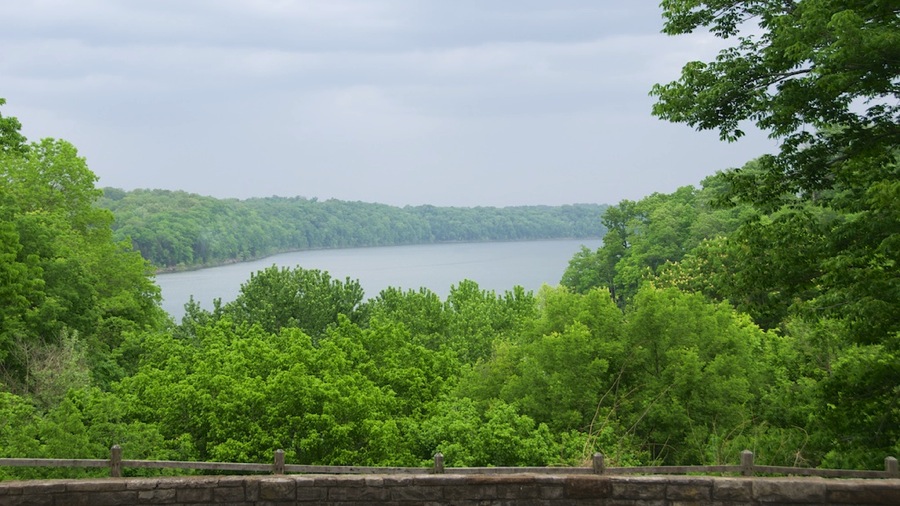 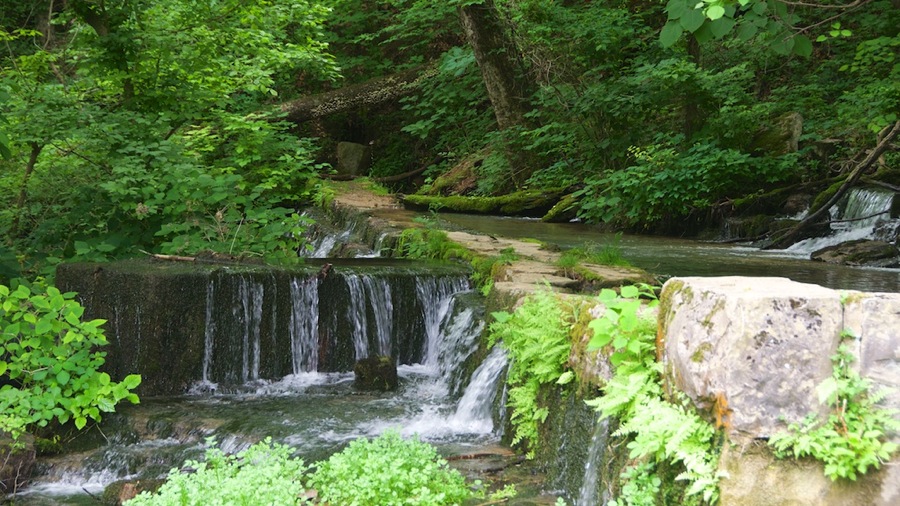 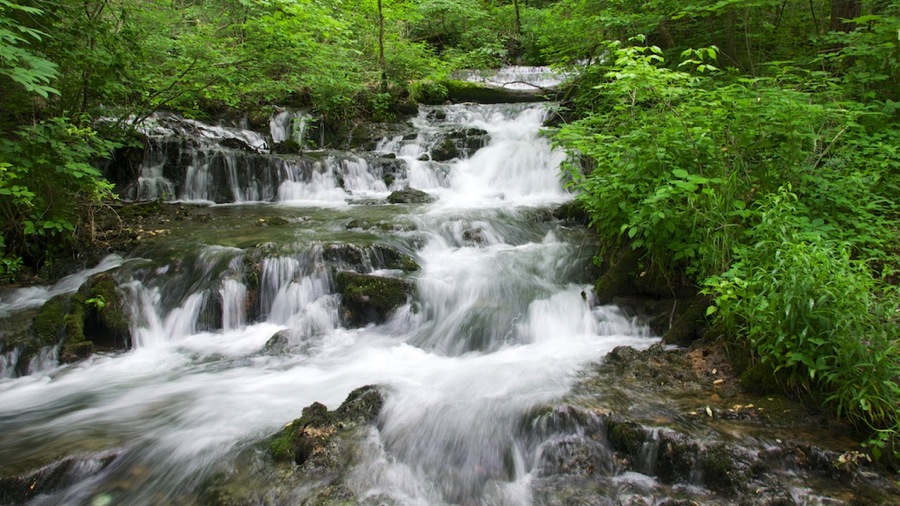 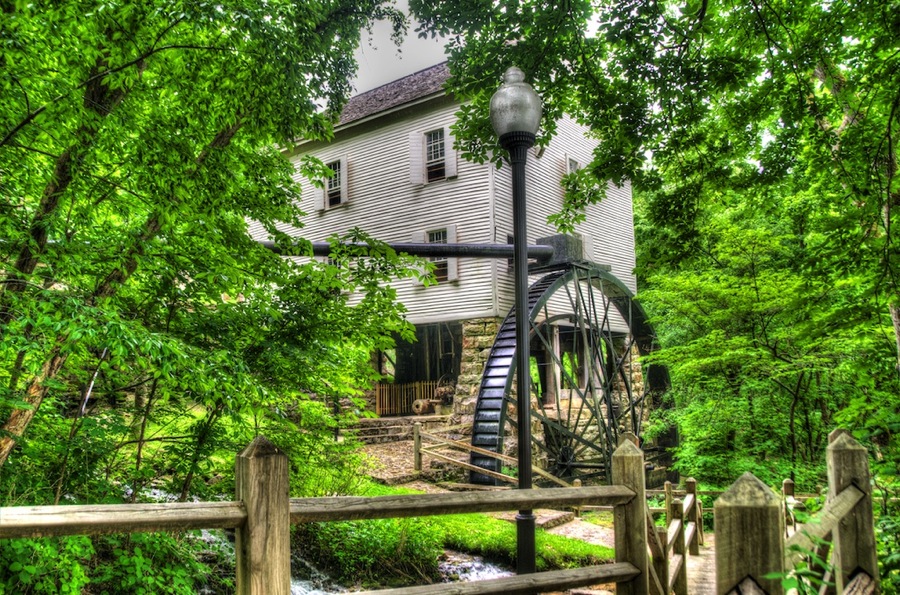 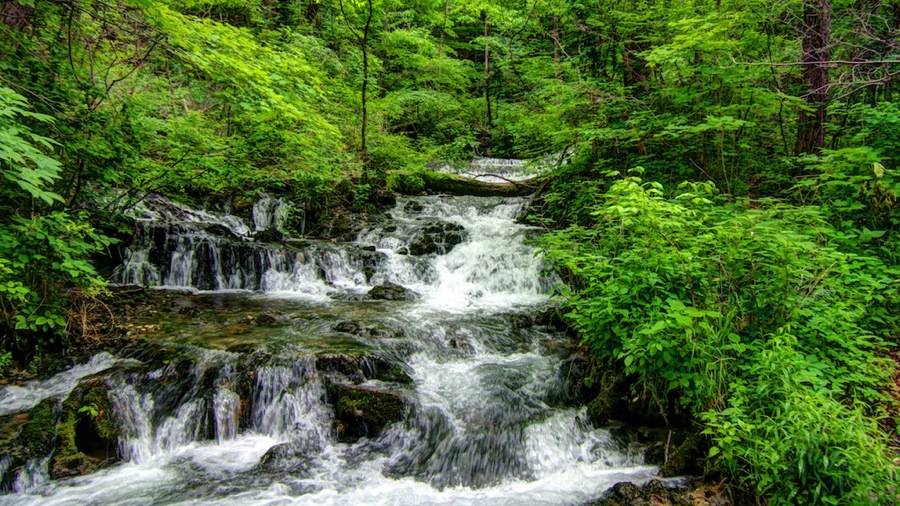 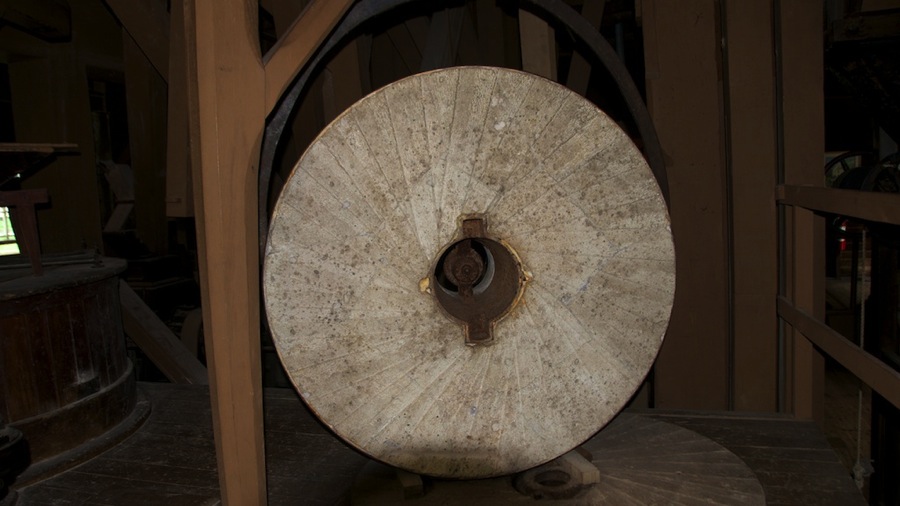 With that our Friday trip was over and we headed home for a nap and dinner.

Saturday Connie had a meeting with her boss so we just stayed home. Neil went on a bike ride and after all of that we just sat out in the shade in our recliners and chilled out the rest of the afternoon.  While sitting out there a couple of RV-Dreamers from the rally stopped by our site on their walk with the dogs. Red and Pam Beers had arrived a couple of days after us on their way up to Indiana to get MorRYDE suspension added to their fifth wheel. We thought they looked familiar walking down the road but when they walked up Neil immediately recognized their dogs and then Red and Pam. They have friends that also recommended this park…we chatted a couple of minutes before they continued their walk.

Sunday we headed out for 1030 Mass in nearby Burkesville…the priest looked like Mr. Spock except without the pointy ears and the Mass was interesting to say the least. Apparently this is one of those really conservative parishes…if we lived here or were staying longer we would go to the other nearby church instead. After that we had a meatball sub from Subway for lunch and headed off for our two stops for the day.

First up was the Creelsboro Arch…a 300 million year old (give or take) natural arch right near the Cumberland River but downstream from the dam which forms Cumberland Lake. The opening under the arch is about 100 feet high and 150 across…we went underneath it and down to the river bank after a quarter mile or so hike through some slick mucky stuff…good thing we changed into our hiking boots before heading down the hill. 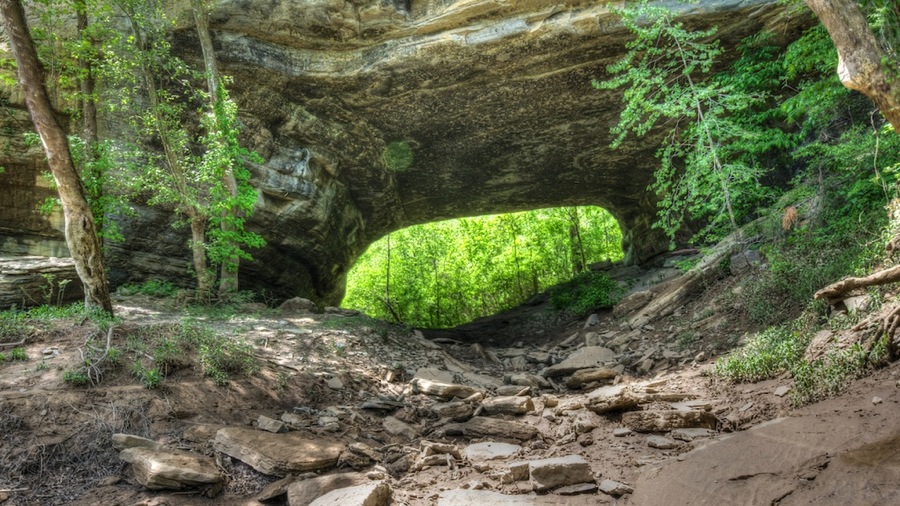 Both before and after the arch we were on a serious “across the river and through the woods drive”…one lane roads, no centerlines, crookeder than anything…and at a couple of points not even any pavement as it was almost a dirt track. Connie said she promised us an adventure…and by golly she was absolutely right.

Finally making our way out of the woods we crossed the dam that forms Cumberland Lake…this is pretty similar to the dam that forms Dale Hollow Lake a little further west enroute to our final stop of the day at 76 Falls. No idea why it is named that though, it ain’t 76 feet tall and the road it’s on isn’t 76 either. There’s an outhouse (with running water and flush toilet no less) across the street and also a memorial to some guy named Dale Somthingorother. The sign was right next to the outhouse and we had a difference of opinion whether it was the Dale Somethingorother Memorial Outhouse or a monument to those famous last words of so many rednecks “Hey ya’ll…watch this.”. Neil went with Door #1, Connie picked Door #2. Shoulda taken a picture of the memorial sign too…dagnabbit, that’s three misses; we musta been suffering from a severe case of CRS (cain’t remember s***) this week. 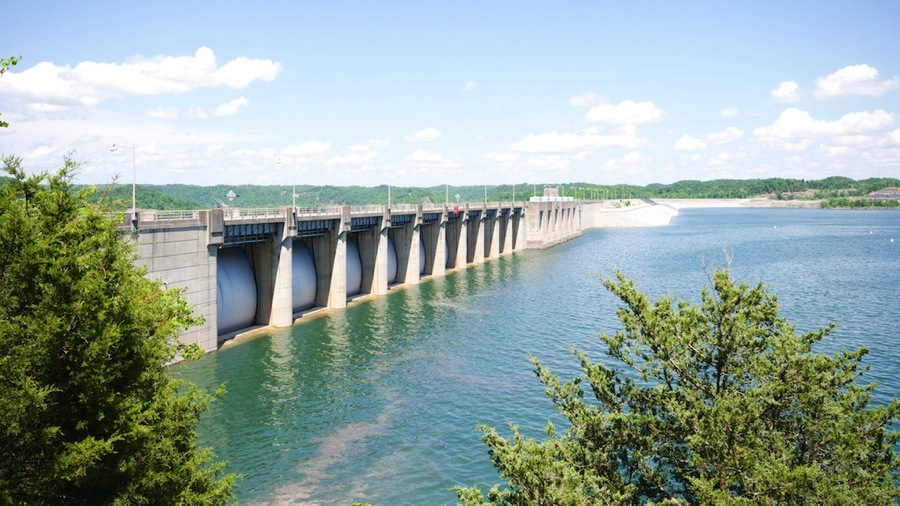 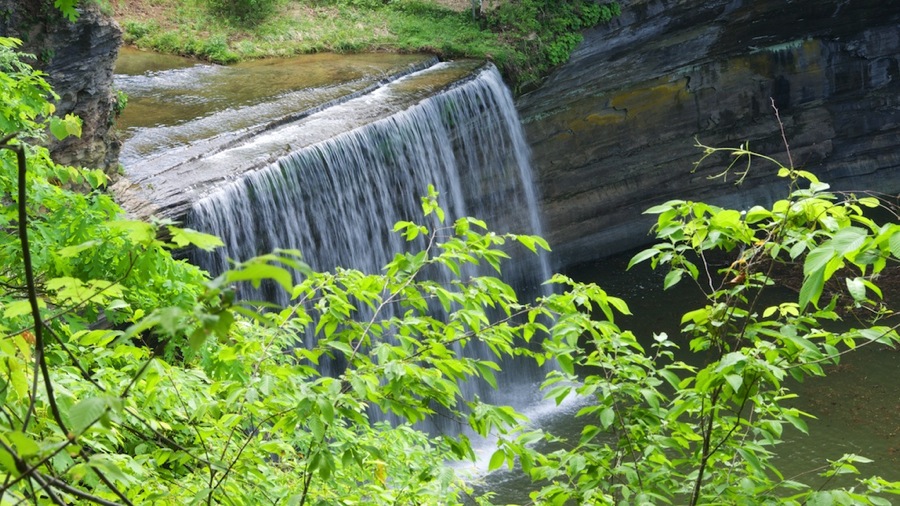 After that we filled the car with gas for our 120 mile or so trip tomorrow and headed home. Dinner was grilled chicken marinated in Fennel Seeds, Lemon, and Olive Oil with some mashed taters and seasoned corn to go along with it.

Today’s another work day…Neil had a few odd maintenance jobs to attend to and did the pictures for this post and Connie (you guessed it) working. We’ll laze the afternoon away out in the recliners then have leftover chicken for dinner. Tomorrow we’ll get packed and hitched and hit the road about 1100 for the trip over to Fort Boonesborough State park in Richmond KY.