We had a pretty decent day yesterday. After Mass up in Winchester which was amazingly packed for a little church in a country town…we had brunch and then set off on our travels for the day. Our planned route would take us to the Civil War fortification right nearby…it’s called a Fort on the sign but is really just a semi-fortified artillery emplacement overlooking the ford of the Kentucky River at Ford, Kentucky (tricky name, eh!). After that we had a trip over about 30 miles from here and back to see the Kentucky Palisades and what was the highest train trestle and longest cantilevered train trestle in the world when it was constructed in 1877…but more about that later.

Back during the Civil War days…Kentucky was on the Union side but the Union Army Corps of Engineers constructed a series of fortifications along the Kentucky River. While not located exactly at the front lines which were originally the KY-TN border; the Kentucky River runs 225 miles roughly east to west from it’s origin in the mountains east of the Bluegrass region to it’s termination with the Ohio River. Due to the Union’s extensive use of the Ohio as a supply line for forces in the field and the series of railroad connections connecting Ohio River ports to the rest of Kentucky the Union wanted to protect their supply lines (as armies are wont to do of course) and the Kentucky River formed a great base of operations due to it’s topography. Since Kentucky is essentially in the Appalachian mountain ranges which are pretty old as mountains go the Kentucky River is also pretty old…something like 100 million years. Due to the (relatively at least…it’s still rock) soft rock of this are geologically the river has cut narrow canyons through the countryside and is too deep to ford in most places. Combine this with the great number of ridges, valleys, and hollers as they call them and forms the basis of a pretty decent defense works. In 1862 an Army Engineer…Captain Thomas B. Brooks was the chief engineer of the central Kentucky district and he first designed and supervised construction of a series of fortifications protecting train stations, river ports, and railroad bridges over waterways. Once that was complete; a natural extension in early 1863 was to extend the fortification line along the entire Kentucky River to provide additional protection for central Kentucky Union forces. Due to the steep cliffside banks (they are called the Kentucky Palisades) and few number of bridges and fords most of the river didn’t need any fortification…but anyplace one could get across the river had fortifications built. One of those was the fortification we saw today which is high on a bluff on the north side of the river near the original settlement of Fort Boonesborough established by that Boone way back in the 1700s and overlooking the small town of Ford, Kentucky which (coincidentally) grew up at the only place around here where the river could be forded.

On the way up the bluff…which entailed about a 1/2 mile hike with 4 switchbacks and about 250 feet of elevation gain…we passed a series of Kentucky Stone Walls. Kentucky is one of the few areas of the country  outside of New England that made extensive use of stone walls rather than fences…in fact there’s a whole driving tour around this area named the Fence Trail which takes you around to a lot of very old stone fences. As you can see from the picture…Kentucky rocks are different than New England Rocks so instead of pieced together various sized rocks they’re composed of flat s tones piled up a lot like courses of brick would be with additional flat stones stood on edge to form the top. This one is probably 250 years old and still looks to be in pretty good shape. We saw a lot more of these on the second part of our day.

Arriving at the top of the bluff we spotted two birds…first a relatively rare Red Headed Woodpecker and also a Eastern Kingbird…Neil especially likes the semi-blurred action flying second shot of the Kingbird. We tried getting closer fora better shot but the long lens was in the car (not expecting birds so he didn’t schlep it along with us) and it was too skittish to get much closer. We tried getting closer to the woodpecker as well…but he was eyeballing us and every time we came a little closer (Neil was trying to circle around behind him so he could creep closer)…it kept hopping around the telephone pole on the far side away from us. Still though…some pretty decent pictures of these two species. 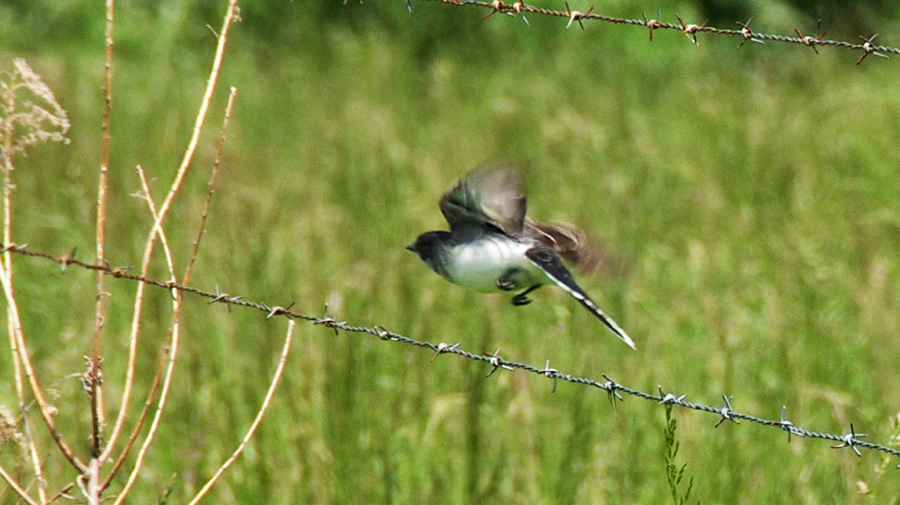 We then climbed the last few yards and got up into the fortification itself. Due to some cattle grazing after the war and the construction of a power transmission line back in the 1970s a lot of the fortifications were destroyed but there is one remaining section of the wall facing south toward the river. Essentially the fortification was constructed by digging a roughly square ditch about 6 feet deep and 10 feet wide and piling the dirt into a berm inside the ditch. A wooden stockade fence was built outside of the ditch using the trees from clear cutting the slope down to the river. Most of these fortifications had an earth and log blockhouse in the middle for protection against assault…but since this site hasn’t been excavated no one knows whether it has one or not…but since it was built at the same time and to roughly the same design as other fortifications it’s highly likely it did have one originally. The artillery pieces sat behind the earthen berm and faced the river. Here is a shot of the cannon emplacement (this is about an 8 pounder or so), a panoramic view of about 90 degrees looking from the cannon’s perspective, and one from the side where you can see the remains of the berm and ditch. Just behind the trees in front of the berm is the ridge edge and it’s maybe 1/4 mile and 250 feet down to the river below. The town of Ford, KY and the associated ford across the river is just out of view to the left and down behind the hill; other artillery pieces on the bluff to the left of this one would have covered that area. 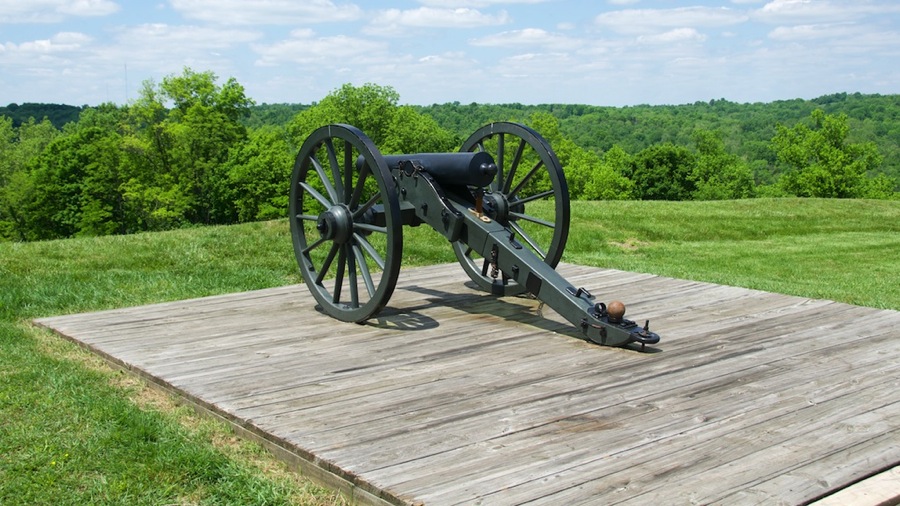 Walking about 50 yards to the left and 20 yards forward of the location of this cannon then turning about 45 degrees to the left is the view down to the site of the former town Ford, KY (it’s the open area on the left center behind the trees next to the river…the town no longer exists) and the ford itself which is the area of the river you can see…it’s only about 3-4 feet deep here so that men on horses or wagons could get across and this is one of the few areas on the river that has a gentle enough slope up to the ridge tops that access to the river edge is possible. 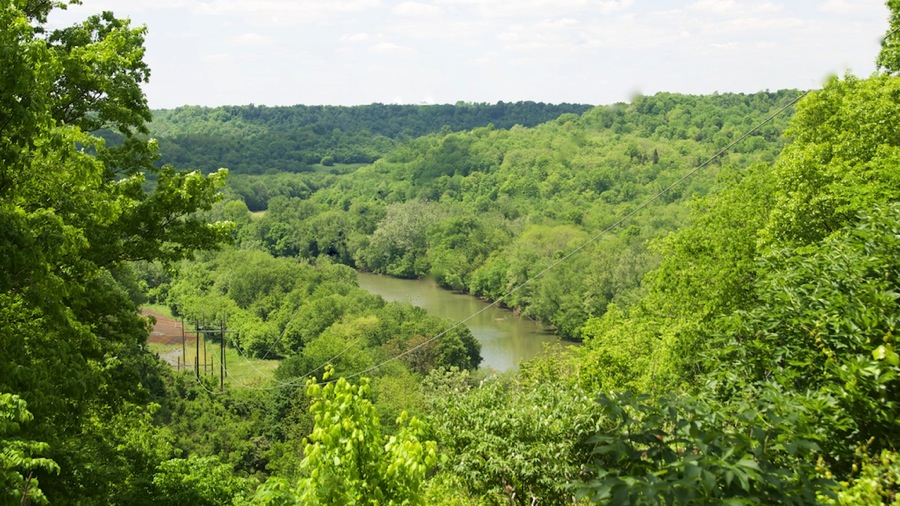 With that we headed off for our second destination of the day…the still in use 1870s railroad bridge named High Bridge. This bridge was originally designed as a suspension bridge in the 1850s and construction started but then the railroad company went bankrupt. Redesigned as a cantilever truss bridge it opened in 1877 as part of the Cincinnati Southern Railway. At 275 feet high and 1125 feet long it was the tallest bridge above a waterway in America and the tallest railroad bridge in the world until the early 20th century. It was strengthened around the original structure in 1911 and expanded to two tracks in 1929. Our original plan was just to see the bridge and the Palisades near it…but when we got there we discovered a whole bunch of railroad junkies standing around and it turned out that the only operating steam engine in Kentucky was due across it in an hour or so…it’s part of a 22 mile tourist vista type train. So…while we waited we got a few pictures of the bridge and Palisades itself…this is a freight train that happened to be crossing the bridge. 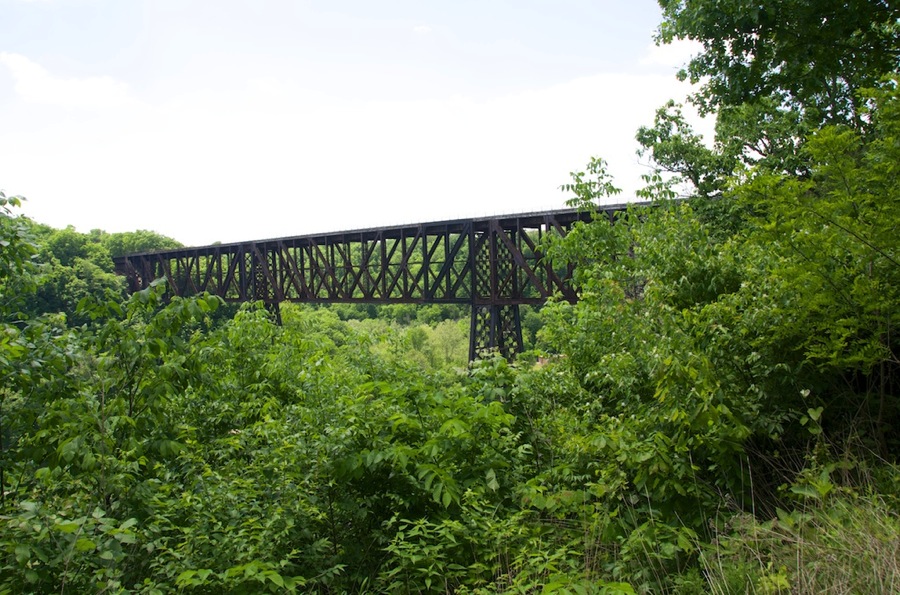 Finally; after about an hour wait (there was a medical emergency on the train that delayed it…we knew because the aforementioned railroad buffs were monitoring the train communications) the steam engine and cars arrived.

In addition to the photos…Connie got a short video with her iPhone 5s…pardon her shakiness but it is the first video she’s ever taken…I’ll make her do better next time😊. Here’s the link to it on our Youtube channel…480p and 720p…and here is the embedded version assuming this works as expected.

After it passed the train junkies left pretty quickly…followed shortly by us. We headed home and had some fries from the Golden Arches for afternoon snack since we had skipped lunch and once home had a grilled steak with rice and grilled Vidalia onions for dinner. Pretty yummy. After that it was a shower and then TV until bedtime.

Today is a work day for Connie but we might do something later on if she gets done early enough…and for dinner we’re currently considering the possibilities as they say.