Moving on into part II of the past two day’s post. Today we visited the Gap of Dunloe…this is a cleft through the coastal mountains that even at the top of the pass is 1500 or so feet high with the sides of the gap being much higher. Think of an ax cut into a log and you’ll get an idea of the narrowness and depth…it turned out to be truly quite impressive. No cars are allowed on the road except for folks that live in the area so it’s either hike or take the Jaunting Car (horse drawn 2 people carriage).

Before getting to the gap itself…we were picked up by our bus driver/boatman for the day, Tom McSweeney…and quite a character he turned out to be. Kept up a running commentary on lady drivers, shallow bottoms, and the trials and tribulations of his life but he was really pretty funny along with telling us interesting stuff. After a 12 or so kilometer bus ride we switched transportation modes into a boat eerily similar to a Maine lobsterman fishing boat from back in the day…long and narrow and open. After a quick look at the Ross Castle…which was the last castle captured by the British…we headed south across the 3 lakes in the Killarney region…the largest Lough Leane, smallest Middle Lake, and bigger than Middle but not large Upper Lake.

Here are pictures from our journeys across the lake…it included a transit underneath the bridge between Middle and Upper lake that was too deep for the outboard motor. Neil got volunteered as the youngest and in best shape person who also spoke English as his first language to assist boatman Tom in pulling the boat upstream through the cut…it was about 18 inches deep and had 4 knots of current or so in it so it was a decent pull for 30 yards or so. 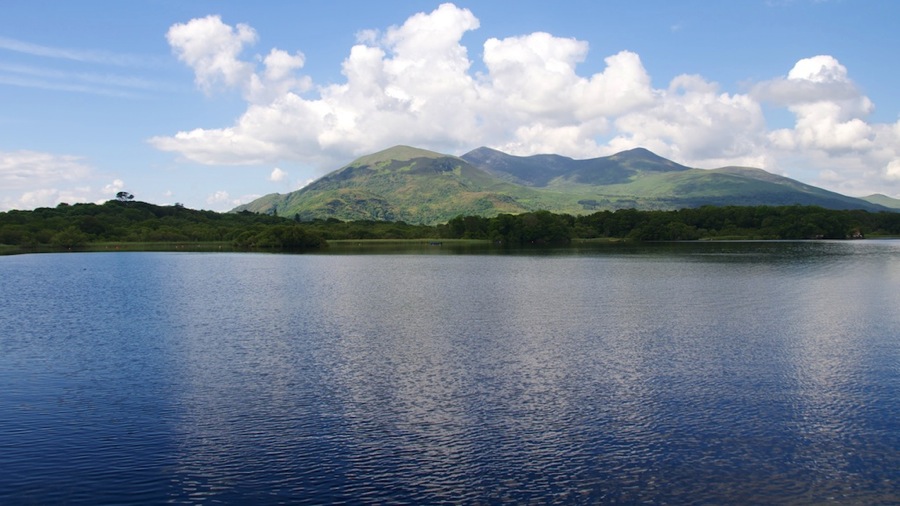 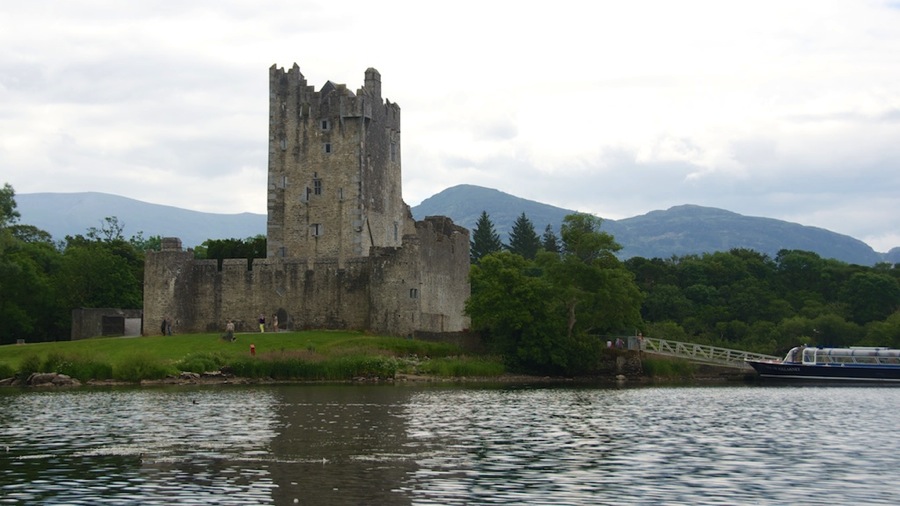 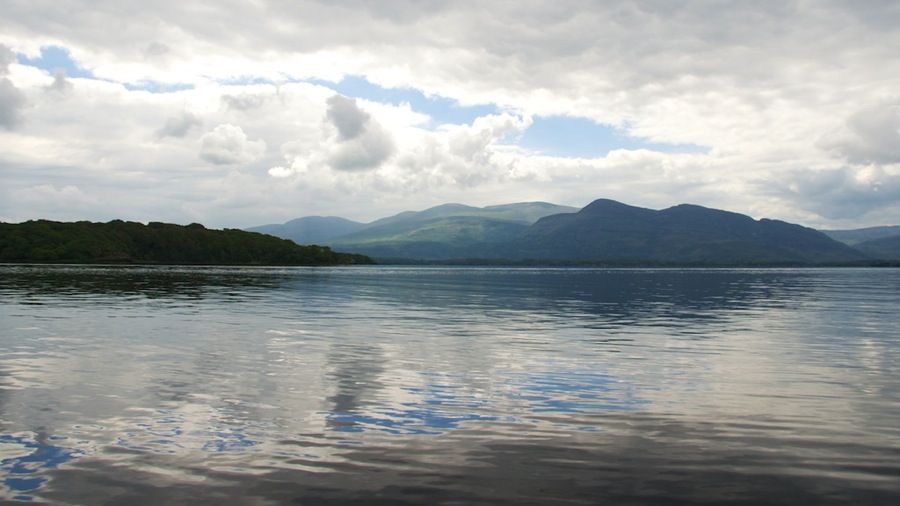 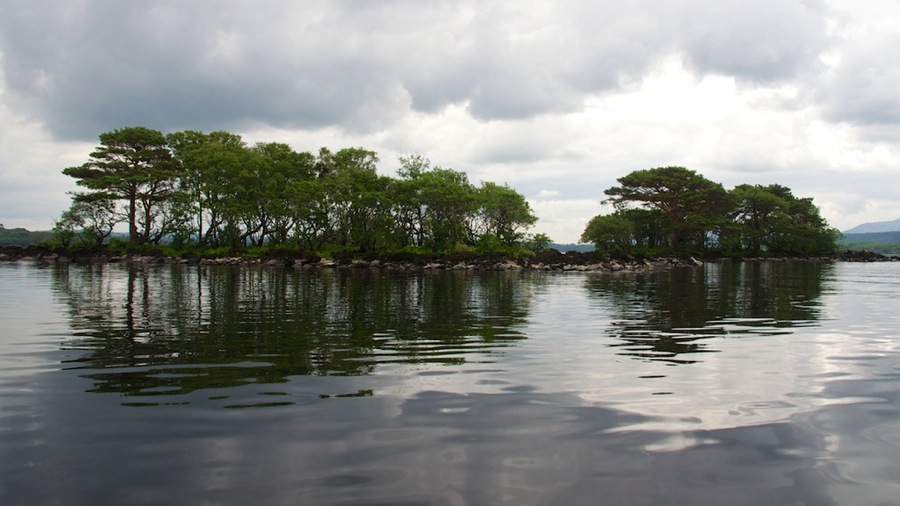 Boatman Tom and Connie in the stern of the boat. 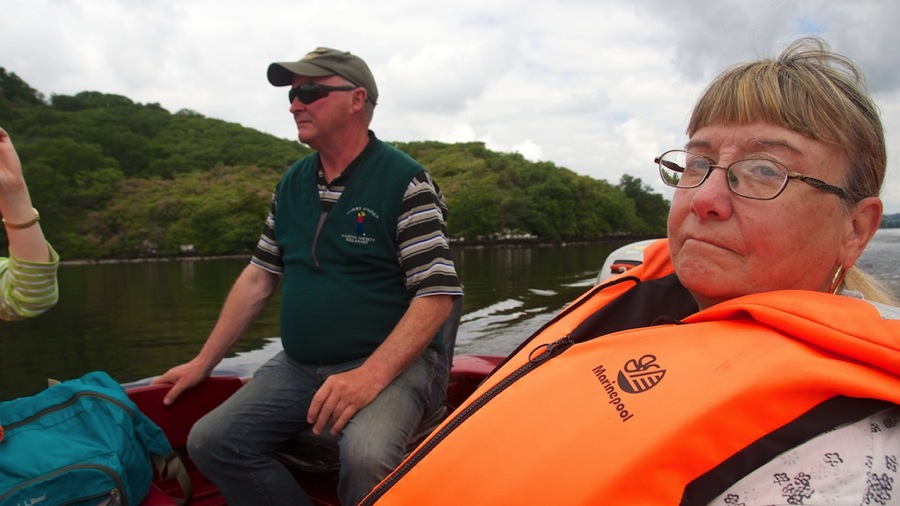 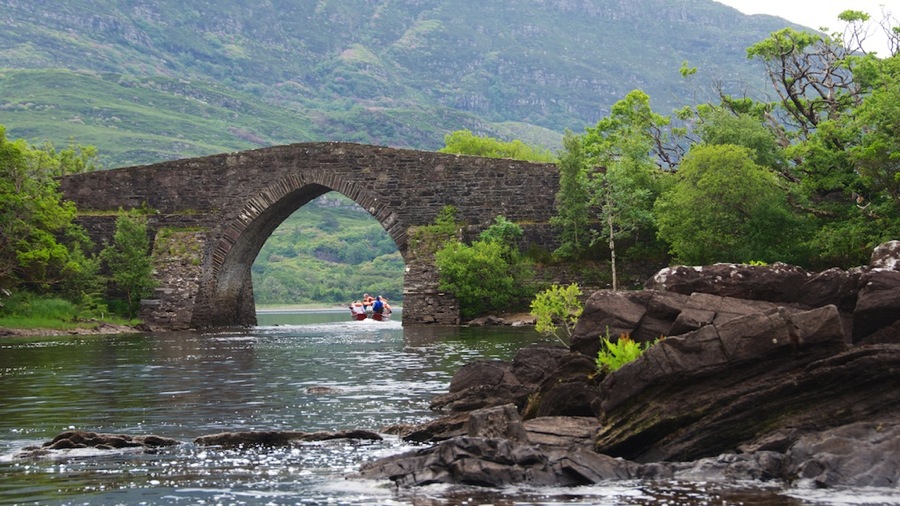 Boatman Tom, Neil, and Mr. Useless Boat Puller heading off to pull through the shallow cut between Middle and Upper Lakes. 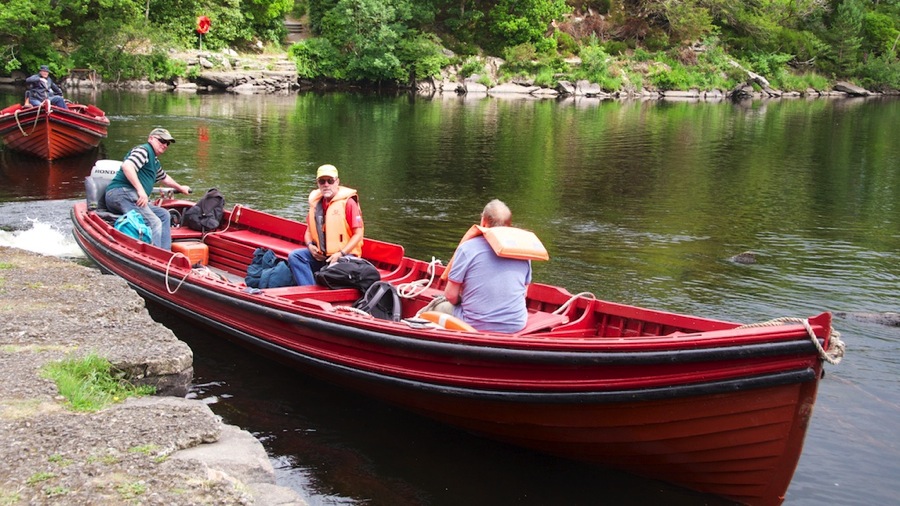 Neil pulling the boat. Mr Useless mostly fell on his ass and didn’t really understand the meaning of the word pull. 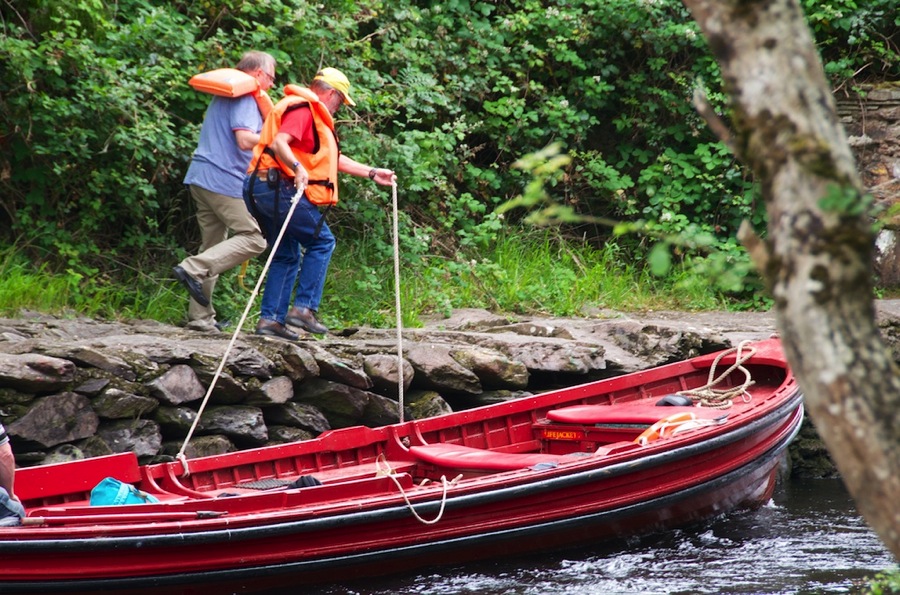 And a shot of the cut we came through with the next boat behind us in it. 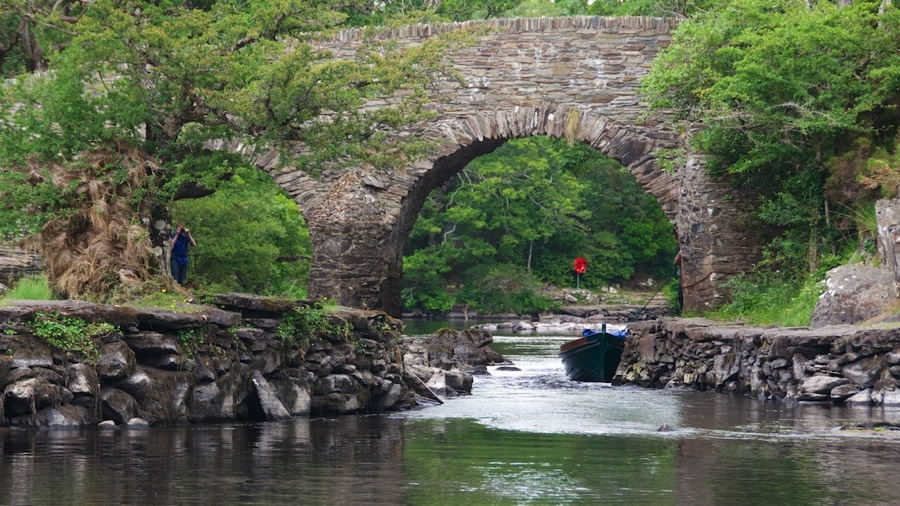 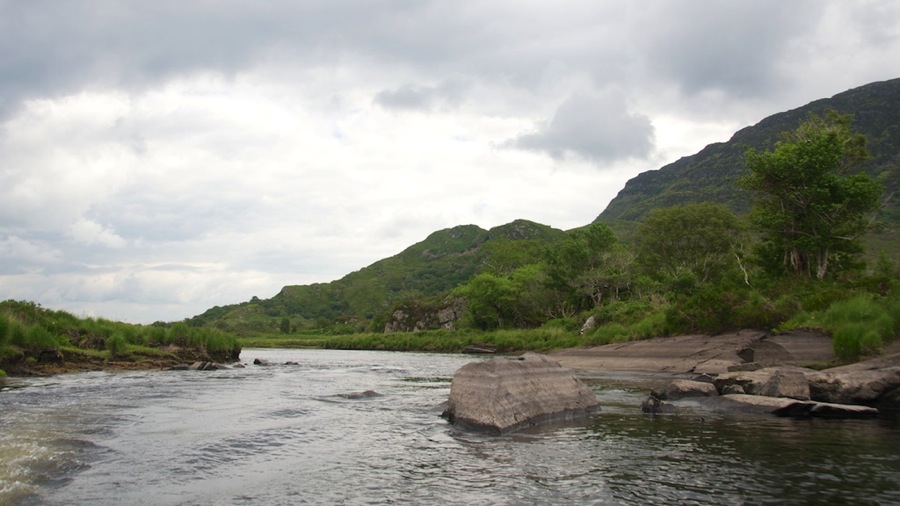 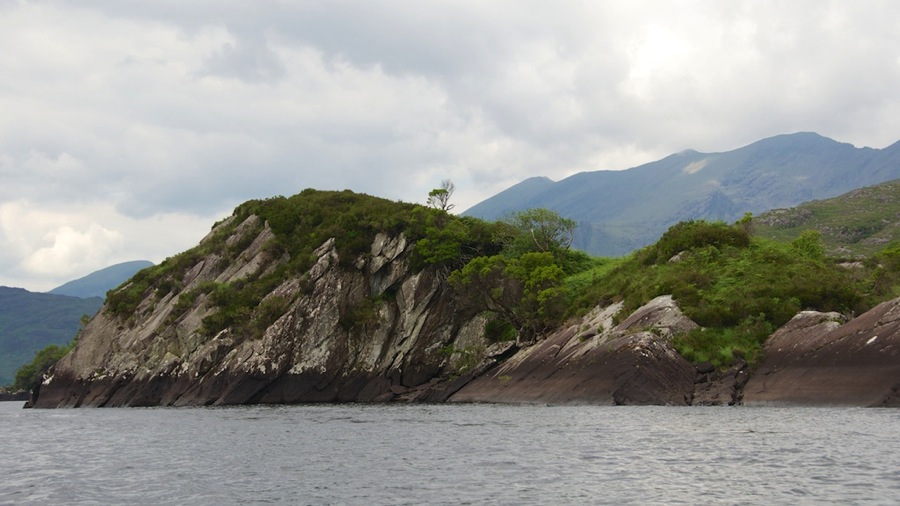 We finally reached the far southern end of Upper Lake and disembarked. Boatman Tom headed back to the bus parking lot with a promise to pick us up at 1600 at Kate’s Inn on the far side of the Gap of Dunloe.

From there we boarded our cart…and while the ride was nice and the scenery spectacular…our driver; err not so much. Rather than a nice leisurely ride in what they call Jaunting Cars here in Ireland through the Gap…it was like this guy was auditioning for the Kentucky Derby. Going up at practically a gallop surely didn’t do Tom the horse (no relation to Tom the boatman) any good at all…and shortly before the top he just said FU to the driver and stopped for a drink.

This guy didn’t believe in slow or even in stopping for a photo…so sorry if some of these are a little blurry. Neil bumped the ISO in the camera up to try and get a fast enough shutter speed but framing the photos was hard when you’re being bounced to pieces. He gave no commentary on the journey at all…and then looked irritated when he didn’t get a tip. Guess he needs to go back to customer service school and learn how to be pleasant and accommodating to his passengers. Still though…the scenery was excellent.

A few shots of the bridge we crossed to get to the Jaunting Cars boarding area and then it was off and up. 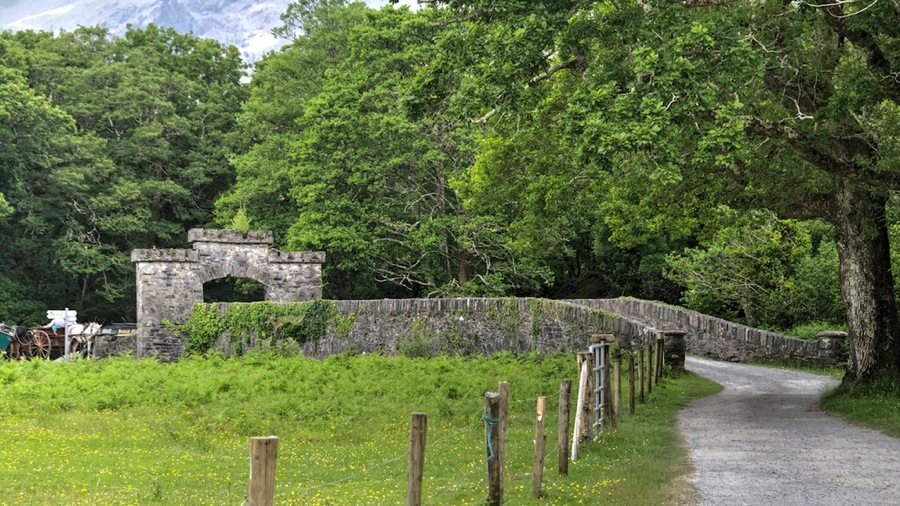 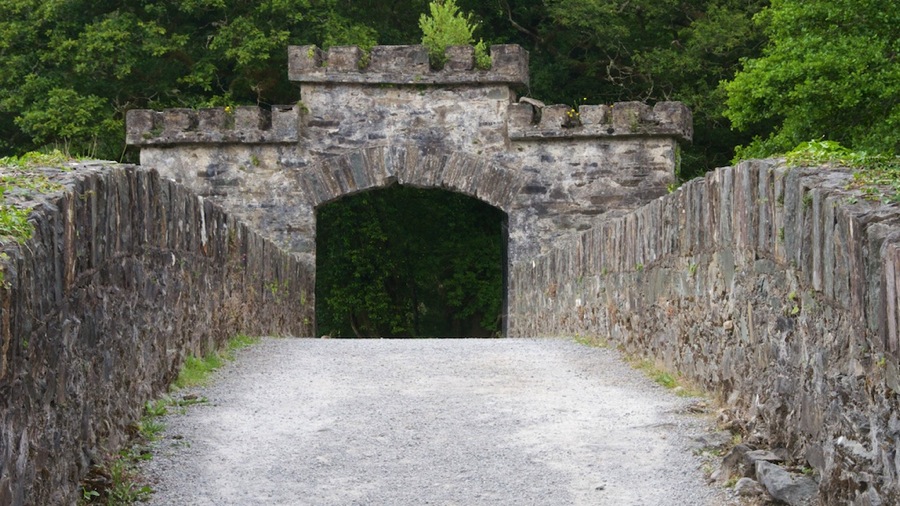 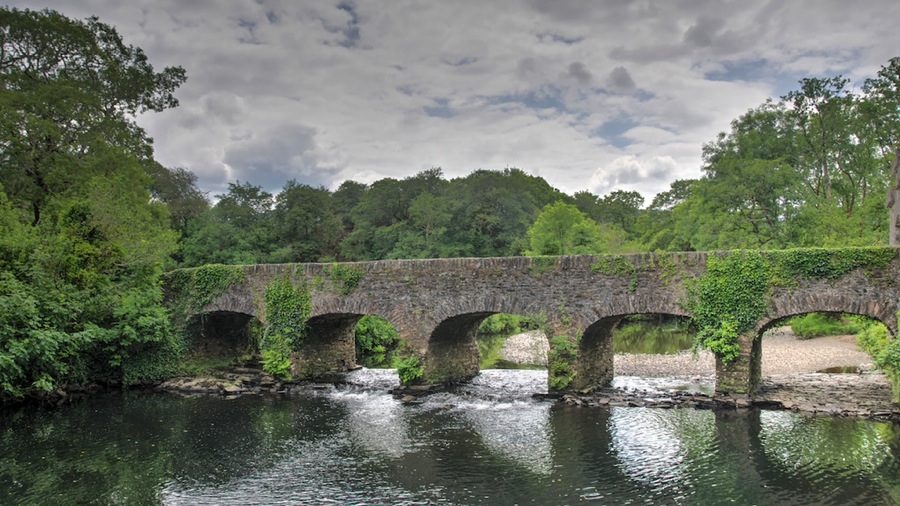 We offered to pay the driver before we left his 20 Euros each but he said “Just pay me at the end.”…we decided he was just fishing for a tip even though tipping is not customary in this country. As an aside…Ireland is proof positive that you can both pay your bartenders and wait staff a decent living wage and still have a thriving restaurant and bar business…tipping in bars here isn’t done and likewise at most restaurants. Despite this…and contradicting what folks say back in the US about having to tip to get minimum wage to the wait staff…it looks like their entertainment industry is thriving quite nicely.

Again with the narrow roads…what is it with these people. 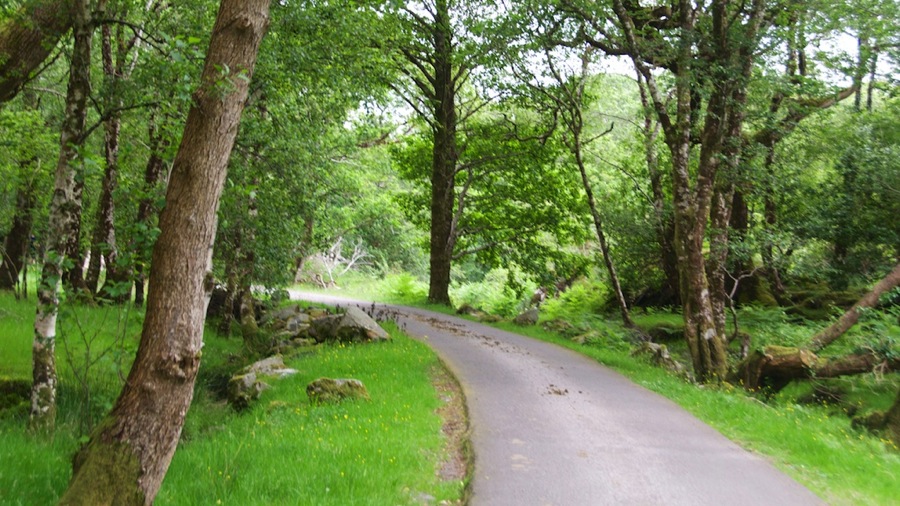 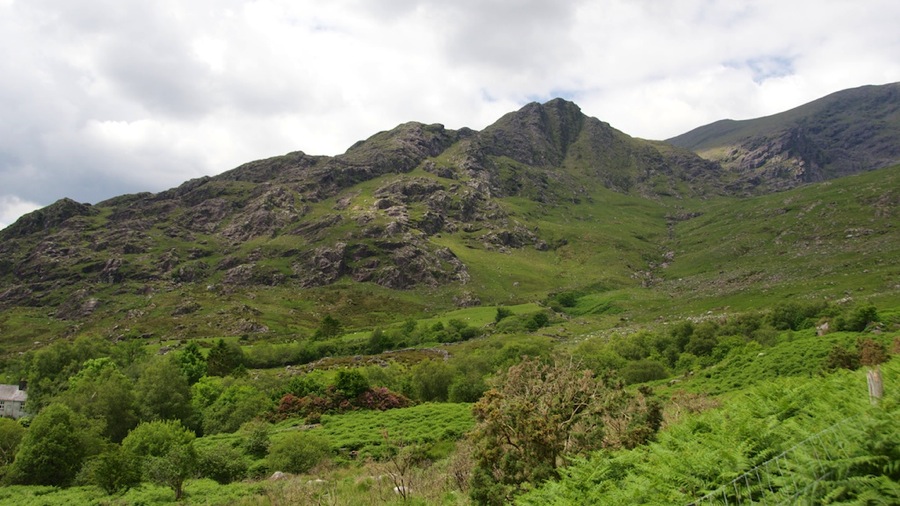 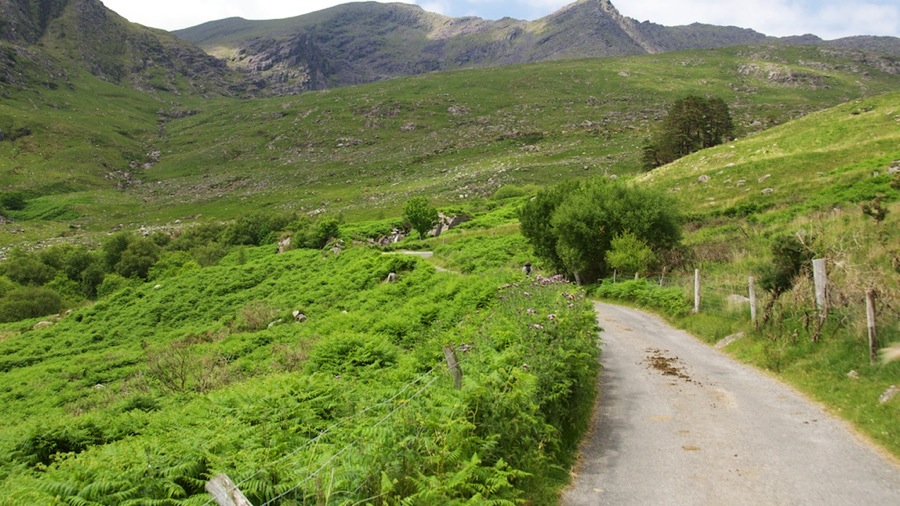 A fellow passenger from our bus that chose to hike instead of paying the 20 Euros for the ride…what was she thinking? It actually wasn’t that bad of a hike, only 7 miles and the road was paved so one could make pretty good time…but from the bottom you only had 2 ½ hours before the bus was picking you up…and while 7 miles is doable in that time you can’t dally much for photos. Still though, given the speedy ride we had maybe she made the correct decision as she did make the bus. 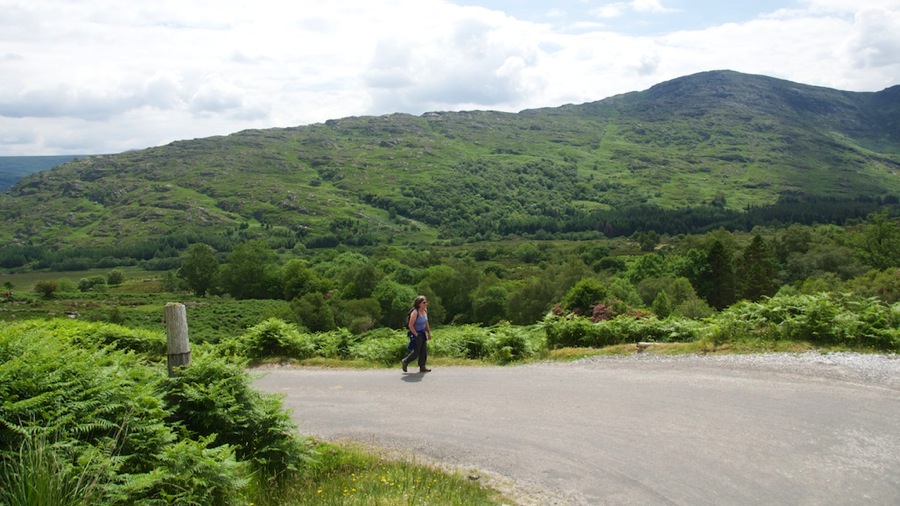 Near the summit Tom the horse forcibly stopped for a drink and Neil took the opportunity to jump out and get a picture from the summit of the pass. 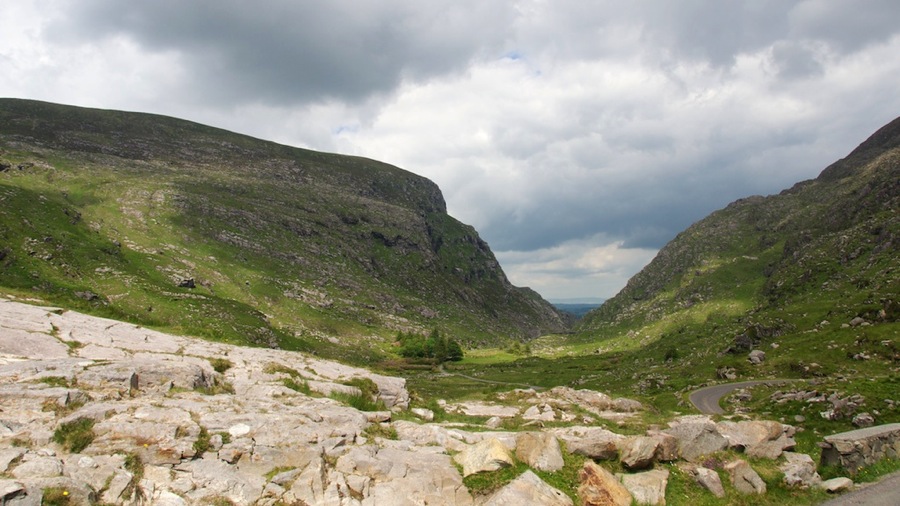 The road down. From here…Mr. Personality the Jaunting Car driver decided to go even faster…and did I mention that these things have no brakes at all other than the horse? (Heck, they ain’t got any suspension either which is the cause for the paint shaker ride.) If anything we got faster as gravity was assisting Tom the horse on the way down. Still no stopping for pictures though. 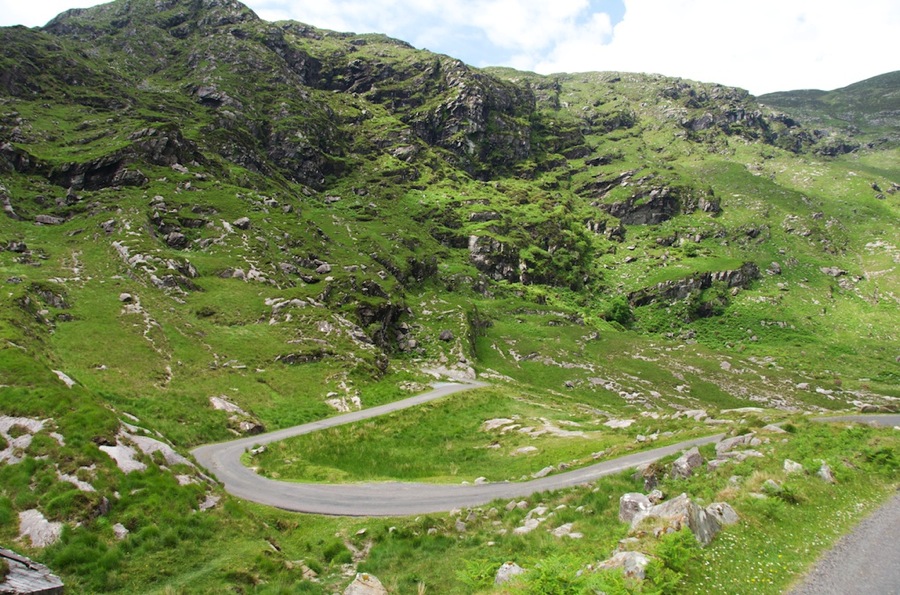 Looking down towards the gap itself…after going through it it’s clear that the Gap refers to the piece between the summit of the pass and the southern end as the ride up was decent but not spectacular scenery. 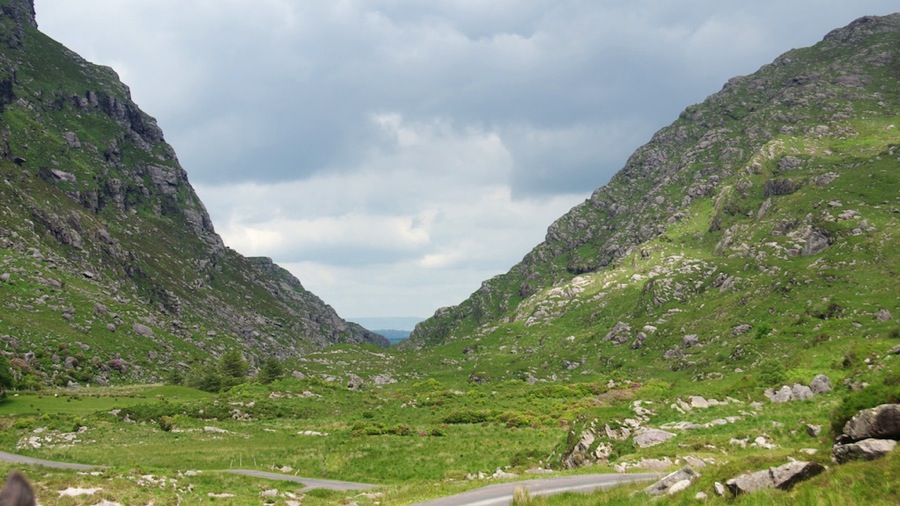 A waterfall in the roadside creek…sorry it’s not up to Neil’s usual standards for waterfall pictures…but at 20 miles an hour inside a paint shaker how good can he be expected to be? 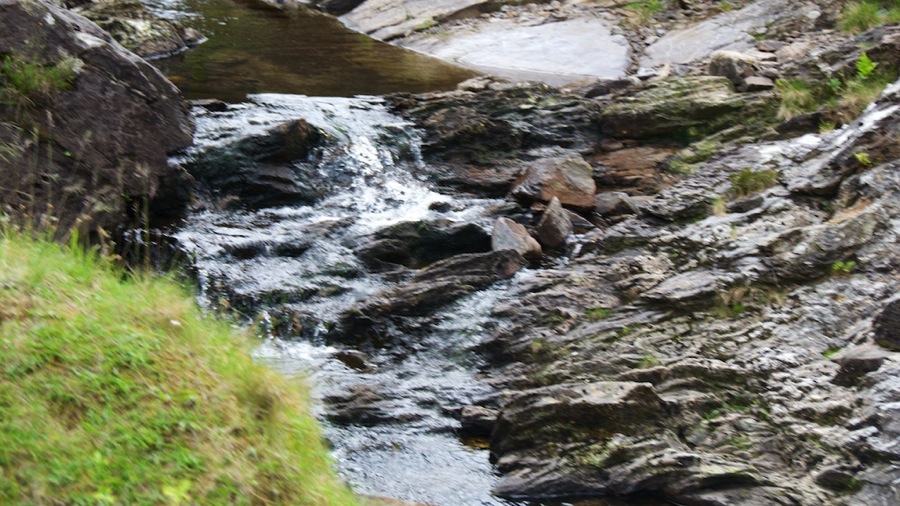 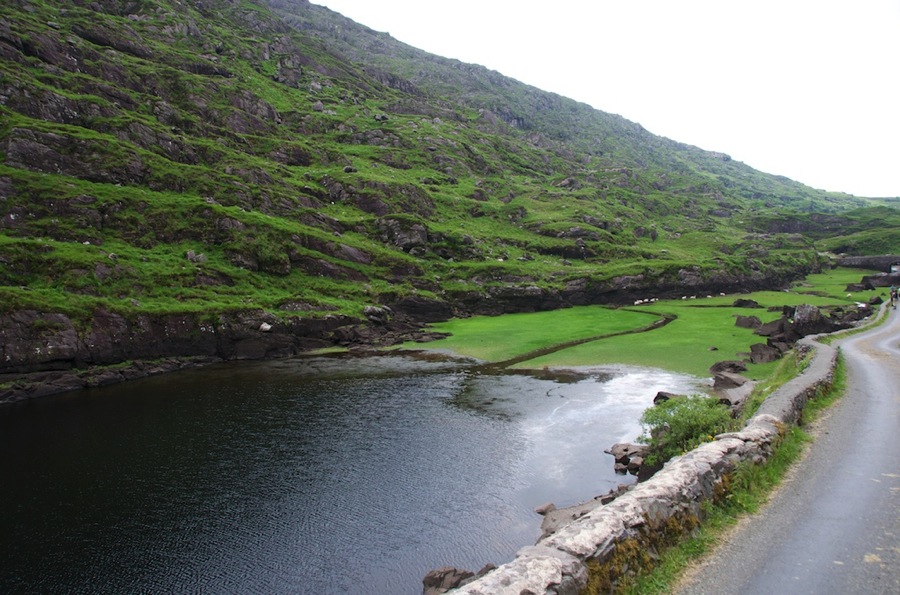 Looking back North about half way down from the summit…you can see we’re in the narrow portion of the Gap at this point. 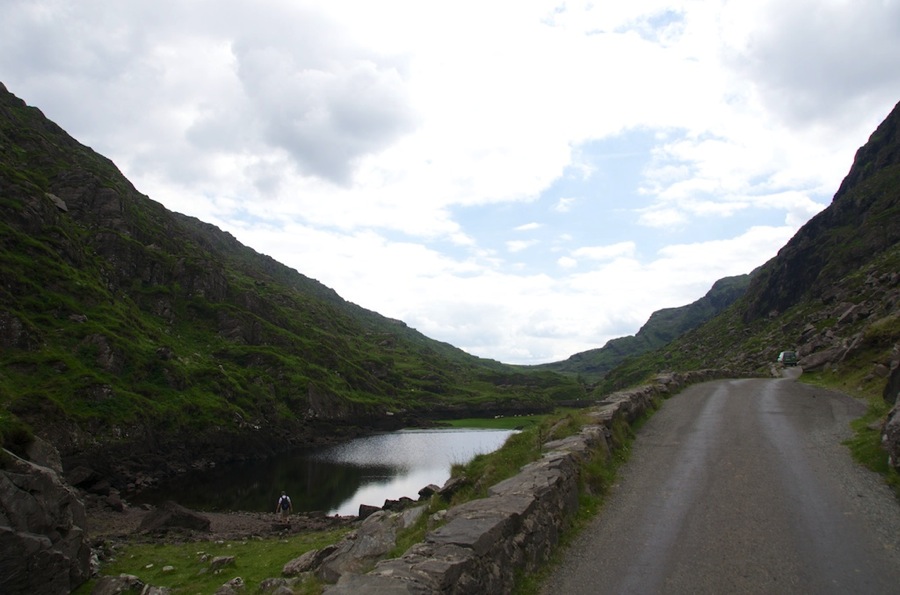 This lake is only a quarter mile or so in front of us and at least 200 feet below. Pretty steep…especially at speed…and did I mention that these things have NO BRAKES!!! 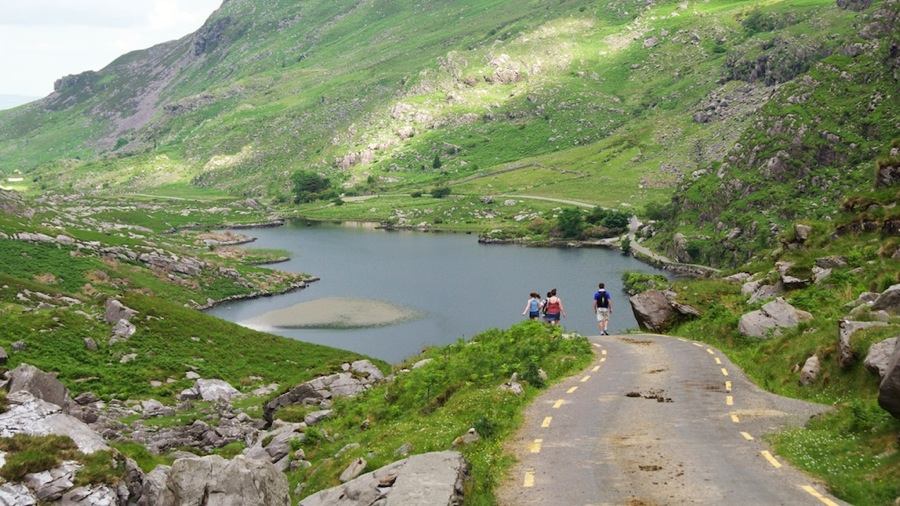 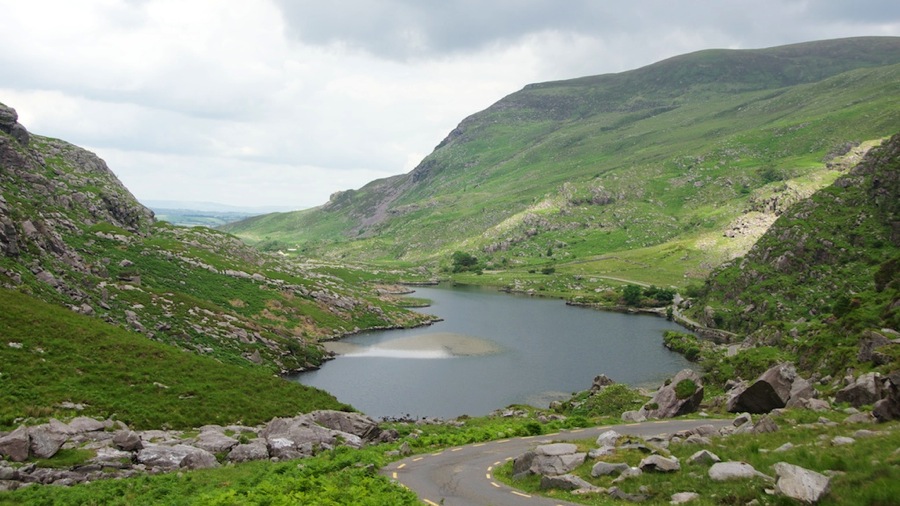 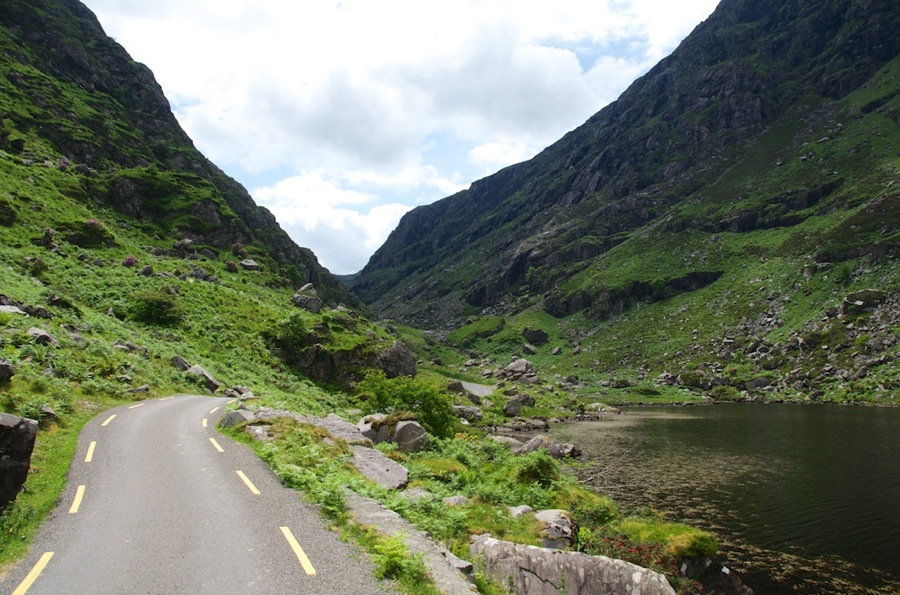 An abandoned building almost all the way down. 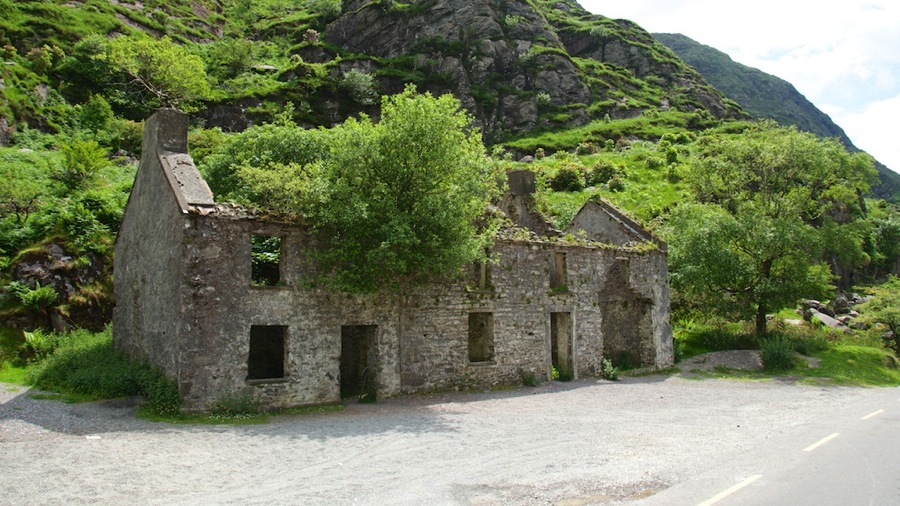 And finally a couple of shots looking back North through the Gap. 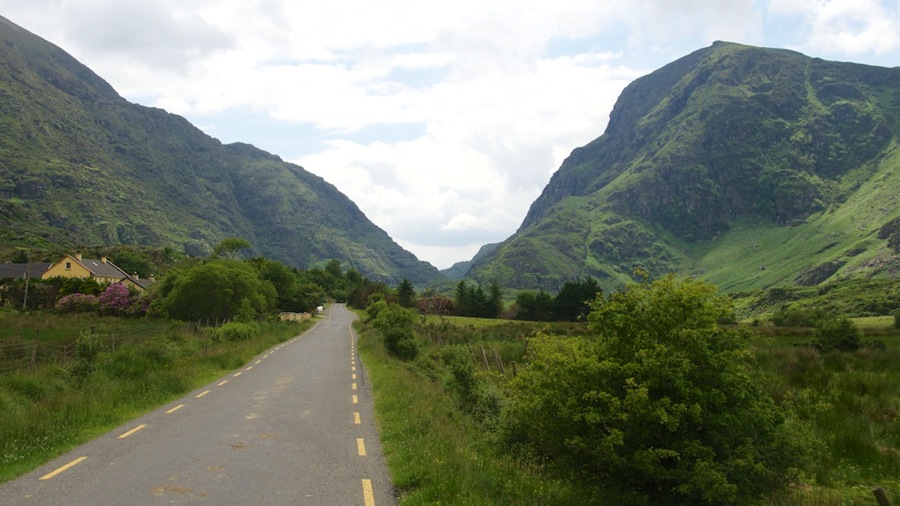 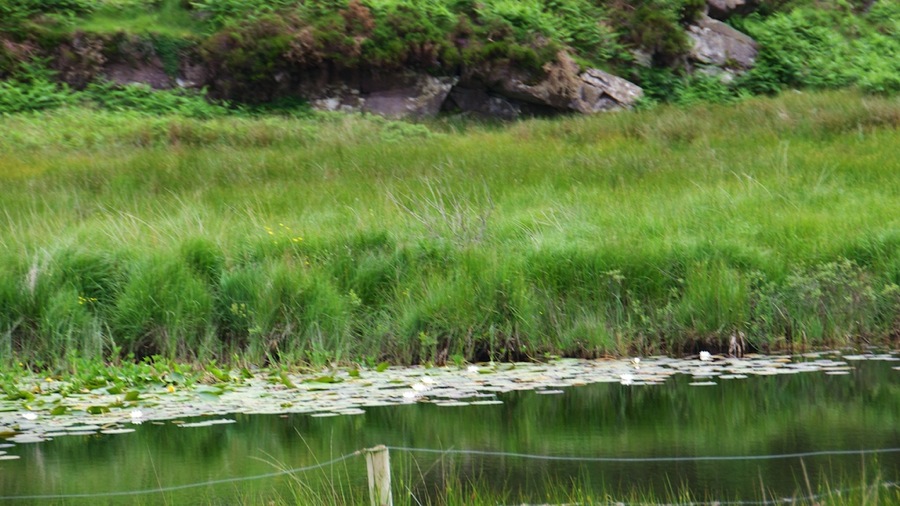 With that we got down and Mr. Personality wanted to get paid. Neil gave him a 50 for our 40 Euro fare and he pulled the old “I don’t have any change.” dodge. Neil offered to go into the shop and get change and he grudgingly got some change from one of his buddies and gave it to us. Mumbled in Gaelic at us as we walked away but given his poor service and headlong charge down the slope (maybe he was reliving his old cavalry charge days?) along with not bothering to offer to stop for photos even though he was sitting 1 foot from Neil and watched him struggle to frame the shots resulted in a brief appearance by “The Tip Nazi” to steal a concept from Seinfeld. “No Tip for You!”

With that we disembarked from the Jaunting Car and had a beer while waiting for Tom the boatman. Instead of returning at 1600 he showed up at 1625 or so…but maybe the concept of on-time really doesn’t apply here. In any event, we had nowhere else to be so it was no big deal and we arrived back at the B&B about 1700. After posting part I of this blog post we headed off to town and ate at Tom MacSweeney’s Pub. Sea bass again for Connie and Tagliatelle with Bacon, Mushrooms, Chicken, and Cream Sauce for Neil. Great food but we were full when they were done so we skipped the ice cream store (too bad, it was really good ice cream and we were looking forward to more…but neither of them had any room left at all.

Tomorrow we’re off to a brief stop at the Cliffs of Moher for a walkabout and a boat ride…then it’s on to Bunratty for a Medieval Dinner. Wednesday we’re off to the Connamara Peninsula (home of the O’Conners which we only recently found out are distant ancestors of Neil’s side of the Laubenthal family) for 2 days. We’re staying in a castle there…Neil hopes it’s nice as it was on Connie’s must-do list for the trip.