Today we had breakfast then said our goodbyes to Trish and headed off on our trip to the Connemara Peninsula. It was about a 100 mile drive but since the roads were your typical narrow curvy Irish roads…combined with a few photo stops and lunch…it took us from about 0830 until 1430 to arrive here at the Ballynahinch Castle Hotel. Neil forgot to take a picture of it for you this afternoon and it was raining when we came back from dinner but I’ll get him to take one tomorrow…this is Connie’s “castle hotel stay” for the trip. We’re staying in the Marconi Room because the other end of Marconi’s famous first trans Atlantic radio transmission was here in Ireland at nearby Clifden. We visited the west end of the transmission site on our visit to Halifax a couple years back so it will be nice to visit the Marconi Station Museum on this end to sort of connect the dots. We’ll visit it tomorrow as part of our peninsula driving tour.

We passed and photographed a few castles, abandoned churches, and stone fort ruins on the way to the area known as The Burren. 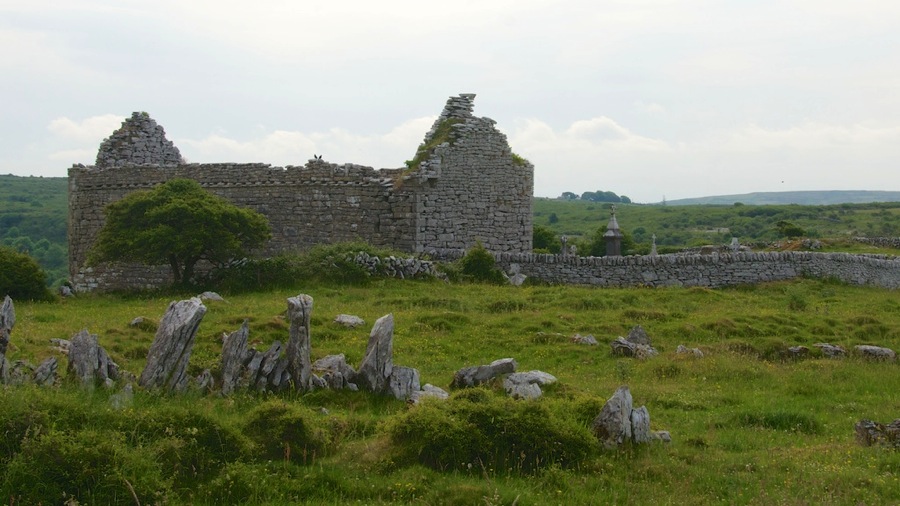 Once we arrived at The Burren we did a drive through it and I gotta tell you…it’s about the crummiest land you’ll ever see, almost all rocks and what isn’t rocks is bog. The only thing it’s really good for is growing sheep as they’re used to scrambling around rocks…cattle would break too many legs on the very difficult terrain. The first stop on our tour was at the Poulnabrone or Portal Tomb. This tomb dates from about 4,000 BC during the late Stone Age and is called a portal tomb since there were two vertical stones with a portal stone across the top of them leading down into the burial chamber. We luckily got there between (mostly) a couple of tour buses so were able to get decent photos. The vertical stones are about 6-7 feet high…so it clearly took a considerable amount of manpower to raise the portal stone to the top. Unfortunately the display signs didn’t say how they did it but that portal stone has to weigh many tons. The first shot is looking west at the side of the structure and the second is looking south into the opening. As you can see; it was more of a symbolic entrance rather than a fully enclosed tomb and the burial site is just a shallow pit past the portal stones. Following that is a close up of the landscape so you can see how rocky it is;the channel is about a foot wide. Then there are shots of a sinkhole caused by a collapsed cave…this area is riddled with caves and many of them have collapsed over the eons. The sinkhole is about 50 yards wide and 40 feet deep. 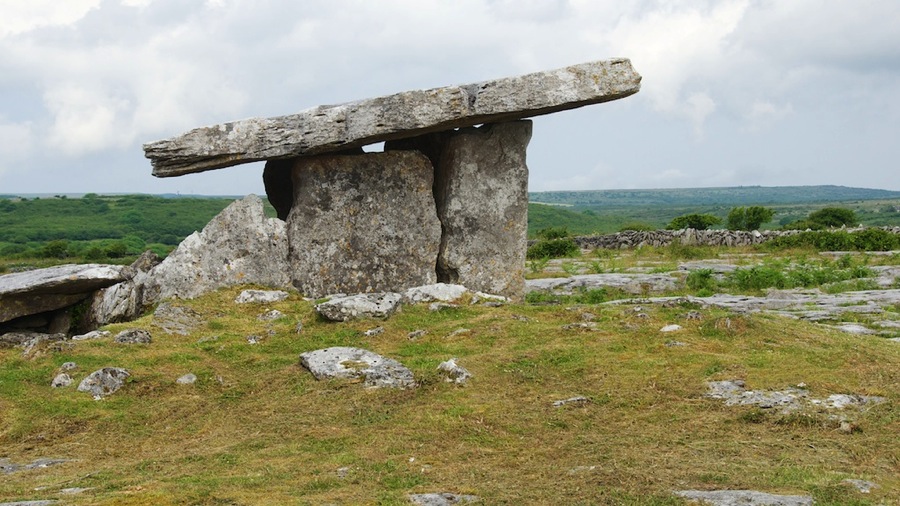 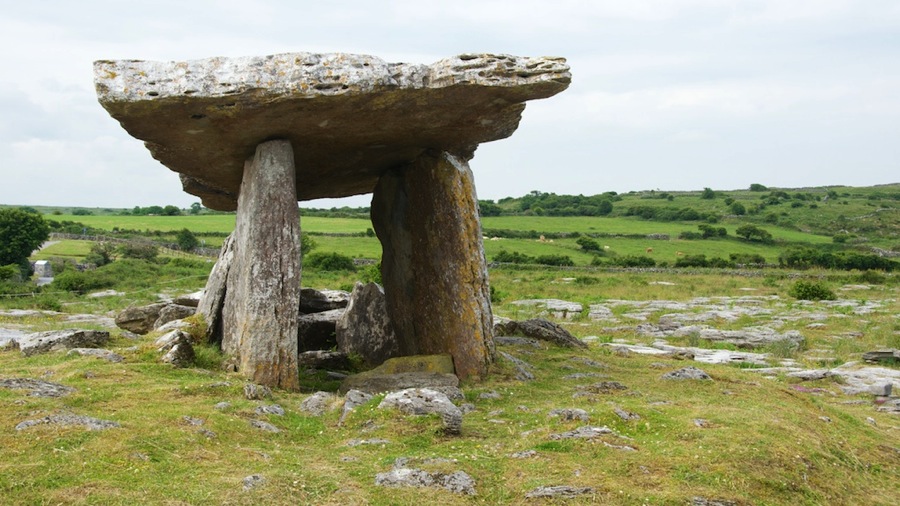 Continuing on around The Burren we got some more shots of the bleak landscape…there are 80 or 100 square miles exactly like this and then this rapid transition at the edges to more pasture like lands where you can grow crops or graze cattle…but even those pastures you can see in the distance had a lot of stones in them originally…where do you think the source material for all the stone walls around the fields came from? We also spotted some wildflowers…turns out we just missed the peak season of June for them by a couple of weeks…they’re mostly gone now. 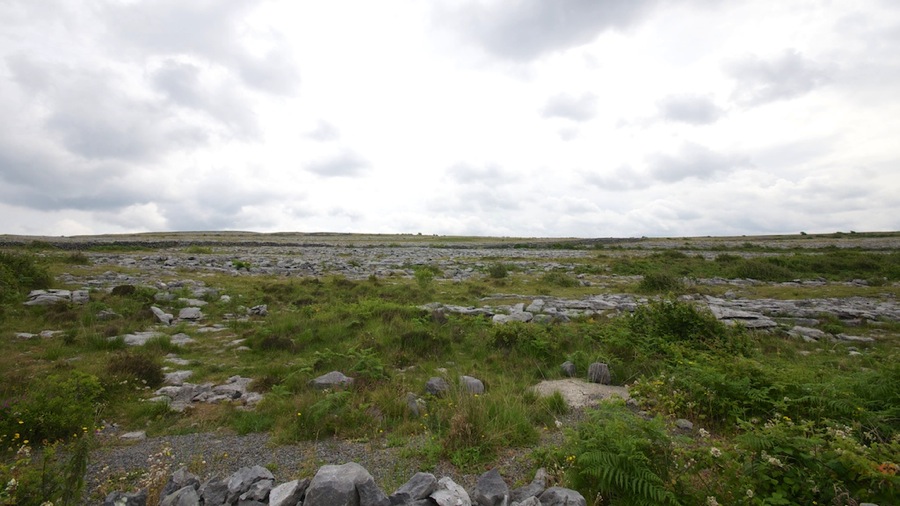 Continuing out of The Burren we passed a relatively new construction church…only 100 years old or so; then the Dunguaire Castle which is another place that has a medieval dinner like we had last night before arriving at our hotel. The final shot is the edge of the peat bog right outside Dunguaire…the peat here is almost solid but there was a stream of water running out of the edge and into the creek towards the sea in the distance. 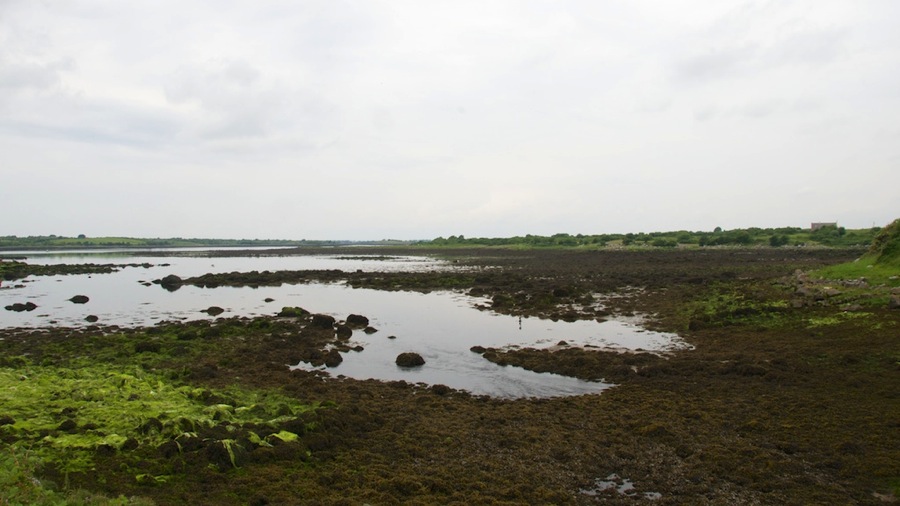 Speaking of Medieval Dinners…ours last night was pretty good. The staff was dressed in period costumes for the time that Bunratty Castle was built and the menu was typical of the time as well. We had soup that came in bowls with no spoons, ribs, then chicken and taters followed by a custard with fruit topping on it. The only silverware we had was a dagger…forks hadn’t been invented yet although the custard came with a small spoon as it would be too hard to eat with your fingers. Before dinner we enjoyed several glasses of Mead…this is essentially beer made out of honey with a couple of differences. First is the really sweet honey taste and second is the alcohol content. It was way higher than either beer or wine, almost up to a brandy in it’s kick…but it was mighty good. Dinner came with wine and some entertainment. We sat in the Great Hall on benches at long tables with food served family style to all. It was a great evening…Connie particularly enjoyed the entertainment as it was a lot of madrigal singing. I’ve also uploaded a video of this to our youtube channel…you can view it at http://youtu.be/Pcqo8EbzNXI. The dinner was actually a lot less cheesy than we thought it would be and the entertainment in particular was very, very well done. Dinner was decent…but then cooking for 200 people at a time it’s hard to really get beyond decent. The soup…pureed parsnip…was outstanding particularly when filled with bread chunks. The ribs were good as long as you didn’t think of BBQ while you were eating them, the sauce was definitely not BBQ but was tasty. The chicken was a bit dry as kept warm chicken tends to get but had a nice sauce which countered the dryness and was tasty as well. The sweet course with it’s custard…well, more of almost a cheesecake consistency although not cheesecake flavored…was topped with berries and whipped cream (I’m not sure that was invented in medieval times though) was outstanding.

I also added a video from yesterday’s Gap of Dunloe tour…this is the portion where we were flying down the hill after the summit. As it says in the video…”This is the action part of the tour.” It can be found at http://youtu.be/8xRG1Ho-E3E. 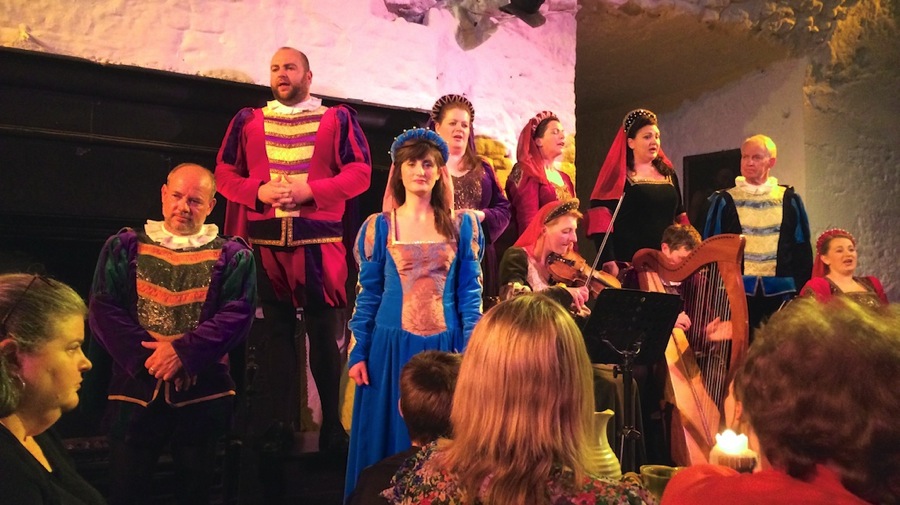 Today when we got to the Ballynahinch Castle we checked in and took a nap for a couple of hours. After that we ran down into the closest town of Roundstone and had dinner at the oldest pub in Connemara, O’Dowd’s which opened in 1840. Dinner was a couple of pints around some grilled Galway Bay oysters, steamed mussels, and seafood chowder. The chowder is “famous” according to all the typical tourist propaganda…but it was only good and not nearly as tasty as Neil’s chowders of any variety. It needed bacon, onions, and more spices. Connie didn’t have any since it had shrimp in it so she went for the mussels instead. After having the chowder, Neil figured he shoulda gotten the prawns in garlic butter sauce…they looked really good and were about 6 inches long overall with the head on so although they were unshelled it wouldn’t have been too hard to do so. He decided it was too much though…bad decision in hindsight.

Tomorrow we’re off to our driving tour of Connemara…only 5 days left in Ireland before we adjourn to Northern Ireland for 6 days or so then we return to Ireland the last day as we transit back to Dublin for our flight. We did figure out that we can drop the car off at the airport which will make getting there on Sunday morning Jul 6 a lot easier.

3 Responses to Transit to Ballynahinch