Transit to Deforest WI, Kayaking and Hike in the Woods

Tuesday morning we took our time getting ready to depart since we only had 90 miles or so to go to our next destination in Deforest WI. We finally departed around 1100; we had figured we would have a slight bit of difficulty making the turn out of the campground onto the road since it had a fairly narrow entrance and ditches on both sides of Lake Drive. Neil got way over to the right side of the exit and we were turning left and actually had 2 or 3 feet to spare making the turn. We headed out to the highway and after our 90 mile trip we got to the Deforest WI KOA right outside of Madison WI around 1300 and got checked in and parked in site 14D. This is a pretty nice campground albeit a little more expensive than our usual…but that’s typical of our stops at KOA (Kampground of America) campgrounds. It is what it is we figured.

Site 14D is on the outer ring and we have some fairly nice views out our side windows over towards some grassy areas…there’s a bit of highway noise since we’re only a half mile or so away from it but the traffic dies down in mid evening and hasn’t been too bad. 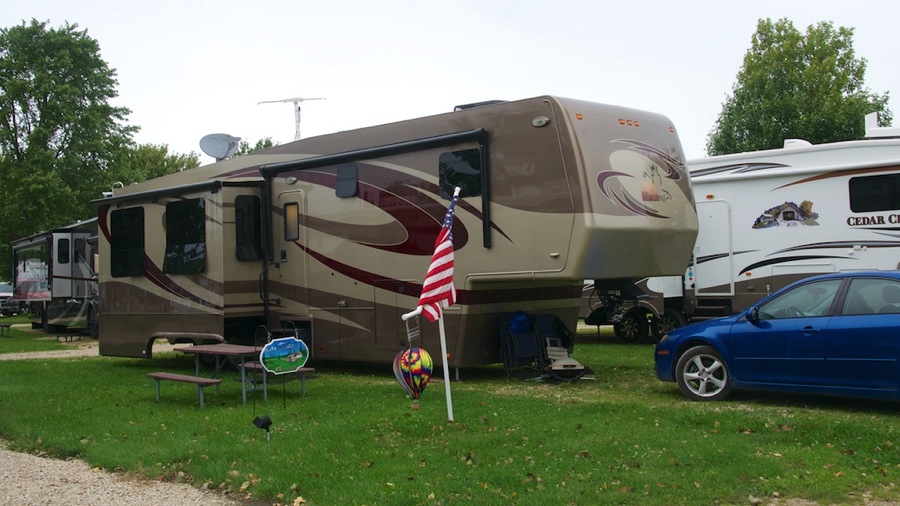 Wednesday we headed off to a local lake that was adjacent to a Nature Conservancy preserve for some kayaking. After getting our Sea Eagle inflated we launched and after a tough half mile or so paddle upwind across the lake we entered the conservancy boundary and spent a nice hour and a half wandering around some narrow passages through the marsh; frequently we were in channels less than 10 feet wide and while there was plenty of water to float the Sea Eagle the Duck Weed that was growing in the water was scraping across the bottom. We spotted some ducks, a batch of grebes and generally had a nice paddle through the marsh. After an hour or so of that we struggled back across the lake with the wind and then headed home.

Thursday was a work day for Connie and Neil took care of some important napping and computer stuff.

Friday Connie worked again in the morning then after lunch we headed of for a hike at the Cherokee Conservation Area Marsh on the River. This is an area jointly administered by the city of Madison, the state, and there’s federal involvement somehow I think as well. We had a nice couple of miles hiking through the grasslands and woods…it was a nice cool day with some breeze so the skeeters weren’t so bad. We didn’t see much wildlife…but then some hikes don’t have much and it was still a very nice walk in the woods.

So…what did we see? Some wildflowers, berries, bees, a grasshopper, a couple views of the marshland. Nothing really superb but again…it is what it is. We spotted (and heard) some Sandhill Cranes but they were too far away for a shot. The first shot is of these really weird seed pods we saw on some trees…they were about 6 inches long and we’ve never seen anything quite like them. 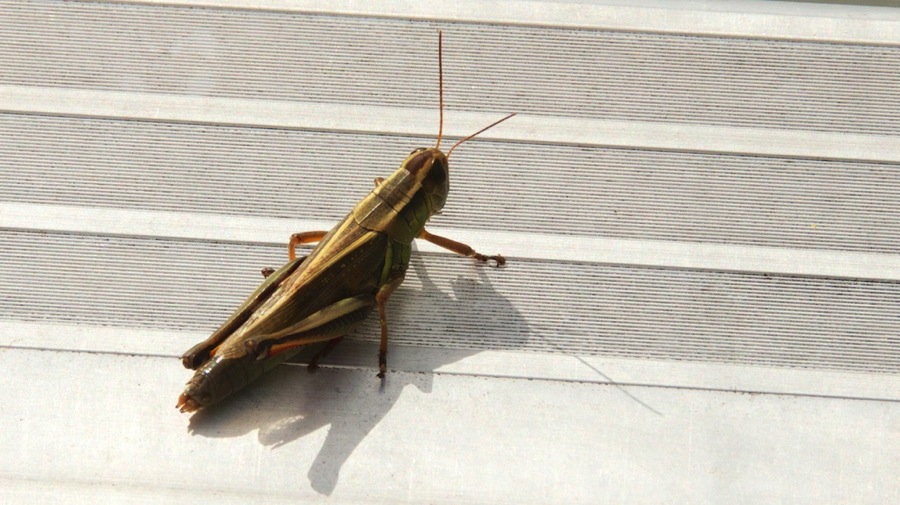 After that we headed home and stopped by a pub near the RV park named Timbers. Met a nice bartender/owner named Ron who served us a couple of quite tasty brews. He also had a bottle of Booker’s 8 year old 127 proof bourbon that he offered us a sample of …we were pleasantly surprised how smooth it was given the high proof out of it. It’s a single barrel bottled bourbon…which means that rather than mixing a hundred barrels at a time to ensure consistent flavor it’s bottled directly from the barrel and the next barrel might (or might not) taste completely different. We’re going to have to remember this brand…as it was really, really good.

After our brew (Neil had Shocktop Apple Ale and Connie had Spotted Cow) we headed home and Neil cooked up some spaghetti with tomato/garlic/bacon sauce for dinner. After that it was showers and then TV until bed.

1 Response to Transit to Deforest WI, Kayaking and Hike in the Woods