We got up this morning and after coffee and a breakfast of leftover Orange Cinnamon Rolls from yesterday (they came out of a refrigerator can but were still pretty good) we headed off to downtown Madison WI about 12 miles from here for our Fun Stuff© for the day; the 1100 Wisconsin Capital tour.

We were a few minutes early but right at 1100 our guide Dinah came out from the Visitor Desk and started our tour. We started on the ground floor then went up and toured 2 of the 3 branches of government (executive, legislative, and judicial are all headquartered in the building…but alas the Governor’s Conference Room was occupied with some sort of state business so we didn’t get into see it) on the first floor (which would be the second floor in US building terminology but it was designed as a European building for some obscure reason.

Dinah told us that the dome was the largest in the country (including the US Capitol) by volume and gave us the measurements. Neil…being the trusting soul that he is came home and verified her numbers. It turns out that it is smaller than the US Capitol in both volume and height but only slightly. 790,000 cubic feet and 284.4 feet high vs the US Capitol’s 850,000 cubic feet and 288 feet high…but maybe it just depends on how you define volume and height so it’s possible that she’s correct. In any event…it’s almost certainly the largest state capitol building and it was pretty impressive.

The building was constructed between 1906 and 1917 at an original cost of $7.25 million…which is probably hundreds of millions in 2014 dollars…but the building simply (according to Dinah) could not be reproduced today as some of the rare stone that was used is no longer in the sizes needed no matter how much you were willing to pay. It has 43 different kinds of stone in it from 8 states and 6 countries.

Up at the top of the dome is a mural named the “Resources of Wisconsin”. It’s 34 feet in diameter and strangely enough does not include cheese as Wisconsin didn’t become a big dairy state until well after the building was completed. The mural has a woman named Wisconsin in the middle with other women around it holding out various products from Wisconsin The thing around the picture that looks like a frame is actually a balcony although we didn’t get up that high. Here’s a shot of the whole dome from the center of the floor and also a closeup of the “Resources of Wisconsin”.

The building has 4 wings oriented in the four cardinal directions that were constructed in series so that the building was partially usable after just about 4 years or so and gradually expanded to it’s current size. Situated around the base of the dome are four mosaics…one each dedicated to the Judicial, Legislative and Executive branches of government and the fourth dedicated to Liberty. Each is over 110,000 pieces of hand cut glass. 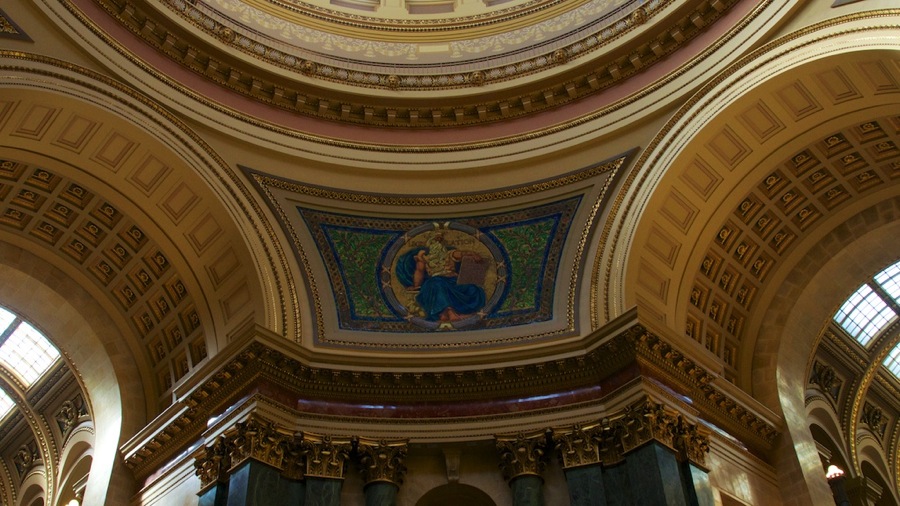 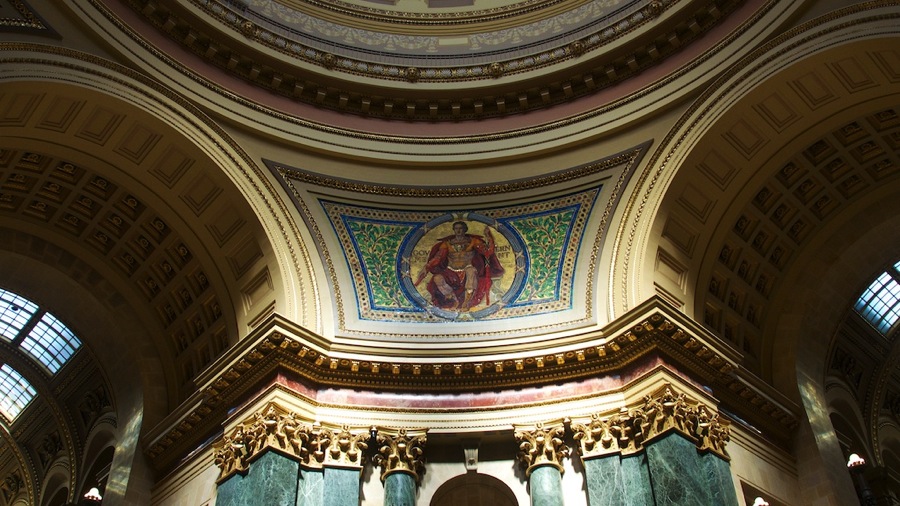 From there we moved upstairs and into a large room used for committee hearings then into the Supreme Court chambers. Here’s a shot of the latter…Neil wanted to ask why there were only 6 chairs since Dinah said the court has 7 members. The large uncomfortable chairs in the back are original equipment in the building and aren’t used in favor of the more comfortable desk chairs at the bench. Our guide Dinah is in the lower right corner. 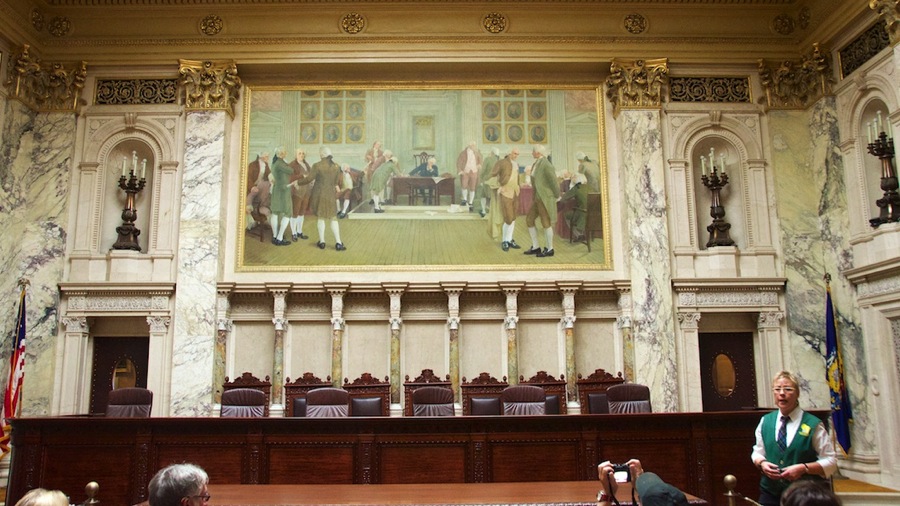 Moving on into the Senate chamber…we were allowed to go everywhere but up on the dais and sit in the Senator’s chairs. The Senate is run in an old and formal manner with no computers, voice vote and paper used for everything. From there we moved into the Assembly chamber…where we were not allowed to sit in the chairs and which was completely modern for the 99 members with computer terminals and an electronic voting system. Just like it’s national counterpart…most state legislatures follow a similar pattern of staid formality in the Senate and a more partisan and modern approach in the lower Assembly or House chamber.

Here’s a shot of the mural over in the Assembly chamber…you can see a stuffed Bald Eagle in the center…this particular bird has a history. Seems that a unit of the Wisconsin militia during the Civil War had a mascot eagle who was donated to the state after the war and lived for many years in the building. After it’s death…Old Abe as it was known…was stuffed and mounted in the Assembly chamber. Unfortunately…it was lost during the fire of 1904 that destroyed the previous Capitol building so it was replaced with another eagle who died of natural causes later. This particular mascot is also the genesis of the mascot of the US Army’s 101st Airborne Screaming Eagle Division. 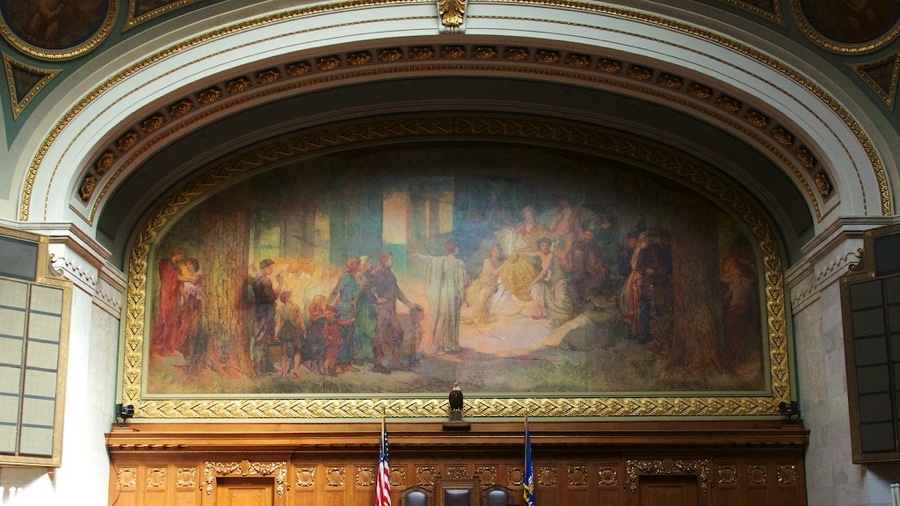 Dinah passed along another story about this mural as well. When it was finished after about 18 months of work by the artist…the architect decided that the painting should include the Wisconsin state animal…the badger. Unfortunately for the artist’s artistic feel…there wasn’t any way to add the badger without removing something else…so the decision was made to paint out a Civil War soldier and put the badger in his place. Looking to the right of center in the above shot you see the large light are with the woman in gold surrounded by other women then further to the right there’s a man holding an American flag. The Civil War soldier occupied the open are between those two. Now shift your attention to the closeup below of the area between those two figures and you’ll see where the badger was added in after the soldier was painted out. When completed the soldier was no longer visible…at least until the painting was restored between 1988 and 2002. After that restoration the outline of the soldier became visible again…if you look in the closeup below you can see the solder in left side profile just to the right of the red woman’s dress directly above the badger. His hat, ear and shoulder sloping down to the figure with holding the flag are clearly visible. This solder is known as the Ghost of the Assembly.

From there we headed up to walk out on the outside balcony and take a look at Madison…the views from up there were pretty nice but Connie was feeling a little shaky with the open heights…she was holding onto Neil for support against her vertigo and he plumb forgot to get any photos. After that we went back into the inside of the dome and went…very, very, very briefly as Connie liked it even less than being outside…onto the inner balcony you can see just below the windows in the top photo. No photos from there either as there was a plexiglas shield to prevent things from being thrown/dropped and they would have ruined any pictures.

After a walk around the inside of the dome corridor looking at various exhibits from construction and renovation of the building we headed back down with the intention of getting lunch. On the way we ran across a demonstration on the rotunda floor…it was called a Solidarity Sing Along and was a bunch of union nuts ranting, raving, and singing songs against Governor Walker…who as you might recall was involved last year in a political fracas up here over limiting union benefits in an attempt to keep their pension fund solvent. It was a bunch of overweight, bearded guys in overalls and even more overweight women in all sorts of trailer trash clothes exercising their right to protest. Buncha wacko’s I tell ya.

On the way to lunch we were able to get a nice shot of the dome itself and also the 15 foot high gold gilded statue on top. Her name is Wisconsin…and when Neil zoomed in on her to take the photo he saw her obvious name…First Down Wisconsin. And by the way…that’s a badger on her helmet. 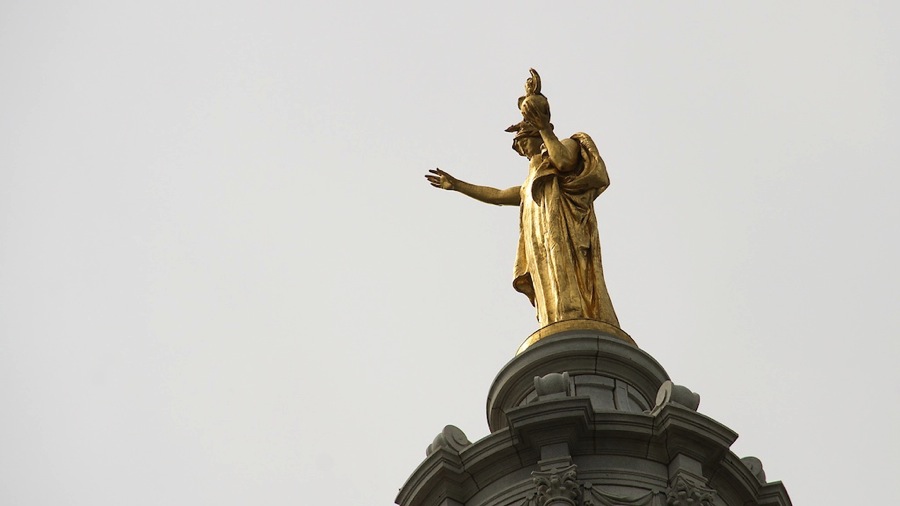 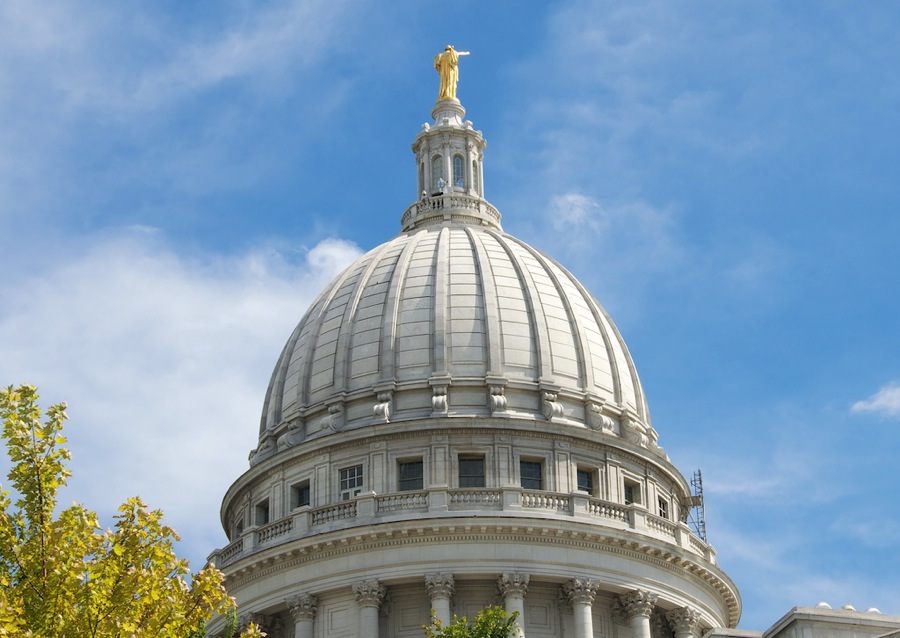 We walked over to a local Irish Pub named Brocach and had a couple of pints of Murphy’s along with a fish sandwich for Connie and a pulled pork sandwich for Neil. Brocach means Badger Den in Gaelic and while it was supposed to be an authentic Irish Pub Neil was not sure about that…as there was no Bud Light on tap and absolutely every one of the pubs we were in over in the Emerald Isle had Bud Light on tap. We asked the bartender about it and he was amazed that we had seen it everywhere over there. 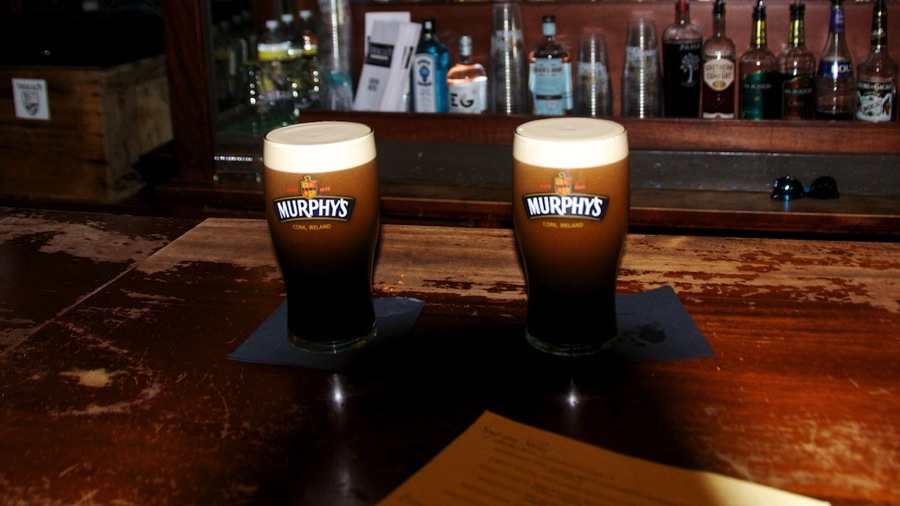 It was a mighty tasty lunch.

Afterwards we walked over to the Wisconsin Veterans Museum but were disappointed on not getting in…their web site says they’re open 7 days a week but the poster in the Capitol said they were closed on Monday’s and sure enough, they were closed. We did see a young woman in combat boots, jean shorts, a black camisole with an orange bra and bright purple Peter Pan haircut…but didn’t get a picture. We headed back for the car, paid our $3.50 parking for 3+ hours and came home for a nap.