Well, as promised Neil went down on Wednesday AM and got some pictures of the eagles (well, one of the adults and the eaglet E6 at least) but there’s good news and bad news about that.

The good news is that E6 is 83 days old or so as of today and is getting pretty close to fledging the nest…i.e., taking his first flight. As you can see from the photos below…he’s doing lots of hover flying over the nest and is able to jump/fly/hover short distances to get to different perches on and around the nest area.

The bad news is that Ozzie has been injured and is currently at a rehab facility on Sanibel Island about 30 miles away with a broken left clavicle.

When Neil arrived early yesterday morning he could see Harriet sitting above the nest looking around pretty regularly rather than just roosting. E6 was in the nest sitting up and also looking around but Ozzie was nowhere in sight. At first he thought that Ozzie was out hunting but one of the other watchers at the nesting site said that Ozzie hadn’t been at the nest since around noontime the previous day and that Harriet hadn’t left the nest since the previous day…which means that E6 hadn’t eaten since the previous day. A little later on another watcher showed up and reported that an injured eagle had been picked up from a back yard near the railroad about a mile away rom the nest on the other side of the river. This sounded sort of ominous but there was no real news beyond that.

Neil took some more shots of Harriet and E6 and then headed home as our friends Tom and Pam Hanneke from back in the navy days were visiting southern Florida for baseball training camps and knew we were down here…so we got together and went to the Ragged Ass Saloon for lunch. After lunch we went off to Bingo at the Elks and in between Neil checked out the various web sites…the eagle cam site, the Florida Wildlife site and by this morning the reports were pretty conclusive that the injured bird was Ozzie as it has a missing left talon like he does and the photos matched  up. Combine that, the relative closeness to the nest of the injury pickup and Ozzie’s lack of presence at the nest and things seem pretty conclusive. By this evening the news had confirmed that it is Ozzie and he’s currently undergoing treatment at CROW (Clinic for the Rehabilitation of Wildlife) on Sanibel.

Ozzie’s current status is that he has a broken left clavicle that is wrapped and set. He’s eating reasonably well and is alert so it appears that other than the broken wing he’s alright. The prognosis is that he’ll spend 3 weeks or so healing up and then a little more time for rehab to strengthen his flight muscles before being released. While it’s possible that his injury might prevent release if he can no longer fly…that doesn’t appear likely at this point so it looks like he was lucky.

What happened is anybody’s guess…he was found near the railroad tracks across the river and almost in someone’s back yard. It’s unlikely he collided with a train as that would have been likely fatal but there are several other possibilities. He was near one of their hunting areas near the river…so he could have collided with an Osprey if he was trying to steal it’s fish…or he could have been stooping on some small furry creature on the ground and hit a tree branch or wire…there’s no way to really tell other than from the injury…which appears to be just a blunt trauma to the forward edge of the shoulder/wing. There’s no open wound so it looks like he just ran into something.

Anyway…here’s some shots we took yesterday…Harriet looking around worriedly and a bunch of them of E6 hover flying over the nest. We’ll keep an eye out and hopefully get some shots of E6 in flight before we leave. 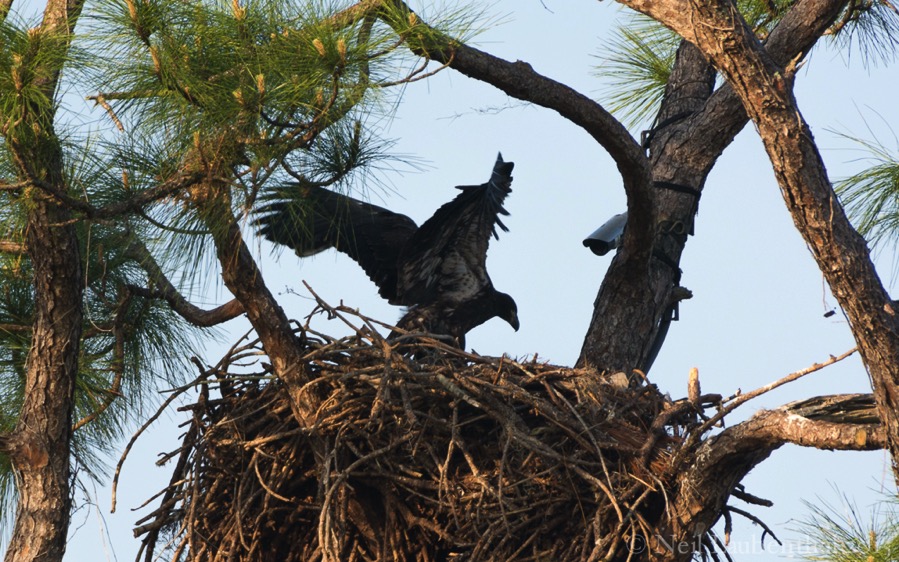 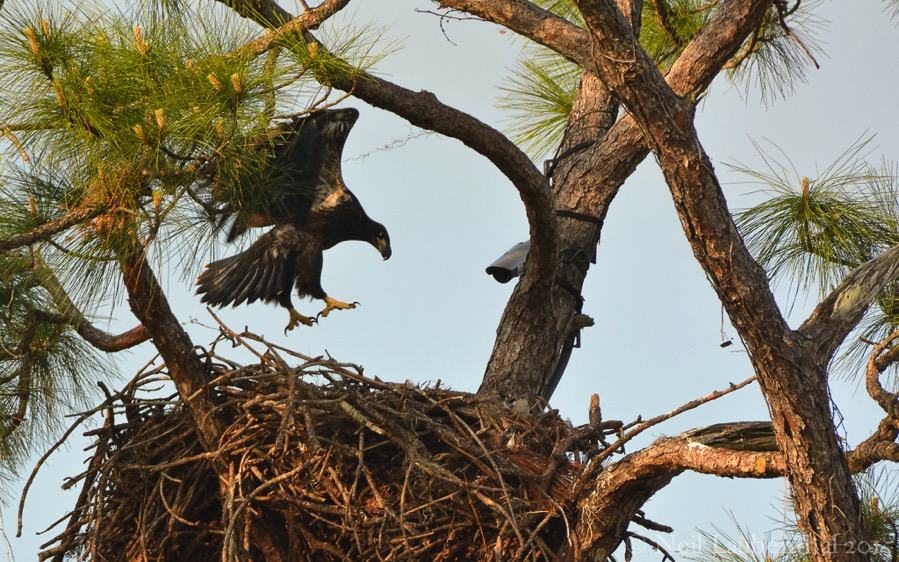 E6 is able to spend 15-20 seconds at a time hovering over the nest so he’s working hard on strengthening his flight muscles. Looking forward to him fledging…and we’ll keep our fingers crossed that Ozzie makes a complete recovery from his injury. I suppose Harriet is wondering where he’s gotten to…as you know eagles mate for life but I have no idea what they do if their mate just disappears. I suppose eventually she would mate with another male as she’s still of breeding age but she and E6 will be around the nest area until at least the middle of May by the time she finishes teaching him how to hunt and such. Hopefully Ozzie will be released by then and I’m sure they’ll bring him back near the nest for release so he can find his way home.