After his first flight the other day…note, I’m going to start calling it as a he rather than an it even though at this point we have no idea whether it’s really a he or she. Based on size, Neil thinks E6 is more likely female than male as he’s just about the same size as Harriet is…but that’s just an educated guess.

After his first flight earlier in the week E6 continues to flex, stretch, and increase his flying capability…Harriet is spending most of the day away from the nest eating for herself and bringing a meal to E6 usually daily. E6 has been continuing to fly around the nest site pasture, over to the trees by the church and pond and back as well as flying to different locations around the nest tree.

The intruder eagles are still hanging around although Neil didn’t see any of them this morning. There is a total of 4 hanging around…two adults, one sub adult and on😊e juvenile. I’m pretty sure you don’t know the difference between those various definitions so here they are:

Juvenile is when the bird has developed the first plumage (feathers) that allow flight…as differentiated from nestlings which still have the downy birth feathers and fledglings which are growing flight plumage…the fledgling turns into a juvenile when the flight feathers are complete.

Sub adult is a bird that has some or all of the adult plumage (e.g., the white head feathers on a bald eagle) but is sexually mature.

Adult has both complete adult plumage and is sexually mature although not necessarily sexually active.

Immature is a broader category that covers everything from just fledged juveniles through sub adults…any bird that is not sexually mature with complete adult plumage is immature. Adult plumage happens before sexual maturity.

So now ya’ll are what we call experts😊

Anyway…Neil ran down this morning and got a few shots of E6 hanging around…he’s 89 days old today. Neil saw neither Harriet or any of the intruders but had a short discussion with his fellow eagle watcher who seems the most knowledgeable…at this point E6 should remain at the nest with his parents for another 5-6 weeks which means that Ozzie may be released a week or 10 days before E6 leaves. Harriet will be teaching him the rudiments of scavenging for food over the next weeks and perhaps a little hunting training but fishing is mostly learned on the job and usually takes until the juvenile is about 2 years old before it’s fully competent at fishing. Until then he’ll subsist mostly on road kill and slow small mammals or snakes. In addition to E6 he got a nice shot of a small brownish bird which we haven’t been able to identify with Peterson’s yet.

Ozzie was on the news again lat night…he’s eating fine and has his broken clavicle wrapped. At this point the folks at CROW who are treating him think he will fully recover with about 3 weeks with the splint and another 2 or 3 weeks in their enclosed flight rehab aviary. Here’s a link to the SW Florida Eagle Cam Facebook page where ya’ll can get some more photos and info on his recovery. 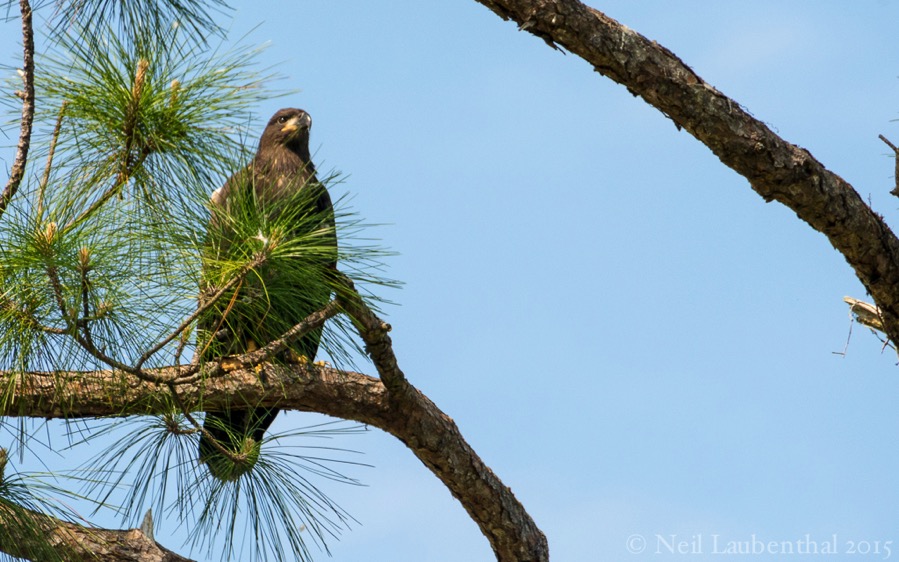 After that he came home and we had leftover stir fry (yum) for lunch and we’re off to the Elks for Tacos for dinner.