Well, the post title pretty much says it all. The highlight of the week excitement-wise was the move from site 29 over to the waterfront site 1 that I posted a photo of last time.

Tuesday Connie worked in the morning and Neil went on a bike ride around the base and nearby waterfront areas. After that we lazed around in the recliners outside under the awning and watched the world go by. We didn’t see many Navy ships go in or out this week but did catch a cruise liner going out , a bunch of car carriers and container carriers, and the continual coming and going of the dredge barge. The basin at the base here is getting dredged to go along with a new pier being constructed on the northwest side of the basin…the new pier is carrier sized but I don’t know whether it’s just a new pier or whether there’s a plan to homeport a carrier here. I would have thought the basin was deep enough for a carrier but perhaps not…in any case the dredge barge keeps getting pumped full of sand then they move it down to the mouth of the river and pump out the sand onto the beach south of the river entrance to replenish where it’s been eroded over the years. The barge makes the round trip of maybe 2 miles 3 or 4 times per 24 hour period and the dredging operation looks to be going on around the clock.

Wednesday we again sat outside and watched the world go by…looks like that’s starting to become a pattern. Thursday we had a planned hike over at the Guana Rive Wildlife Management Area where we had hoped to see some wildlife. Well…the good news is that we had a nice walk in the woods of about 4.6 miles. The bad news is that had gotten into the middle of the day and we saw pretty much nuttin. The worse news is that we chose poorly and failed to either bring our lunch along on the hike or any emergency food and by the time we turned around out at the lake overview we had pretty much bonked…out…of…gas…I’m tellin’ ya. It was pretty much a struggle all the way back…it had gotten hot by that time so we were walking a couple of hundred yards, stopping in the intermittent shady spots for 30 seconds or so then going another couple of hundred yards.

Other than the heat and lack of energy the hike itself was pretty nice…mostly along a graded road once we gave up on the shortcut. Our original plan was to take this shortcut path over to the lake and we failed to see the sign at the branch that said “Trail may be wet in high water conditions”…we made it a quarter mile or so down the trail and around the first two lakes before getting completely shut out and surrounded by water. None of it was deep but we couldn’t see a way that the path continued along the other side so we backtracked and said…”Now we see the sign about high water” and took the long way around on the mostly graded road. Here are a few shots from the hike…Neil forgot to get one while we were on the swamp march portion of the hike so unfortunately you don’t get to see the lakes we tromped through. 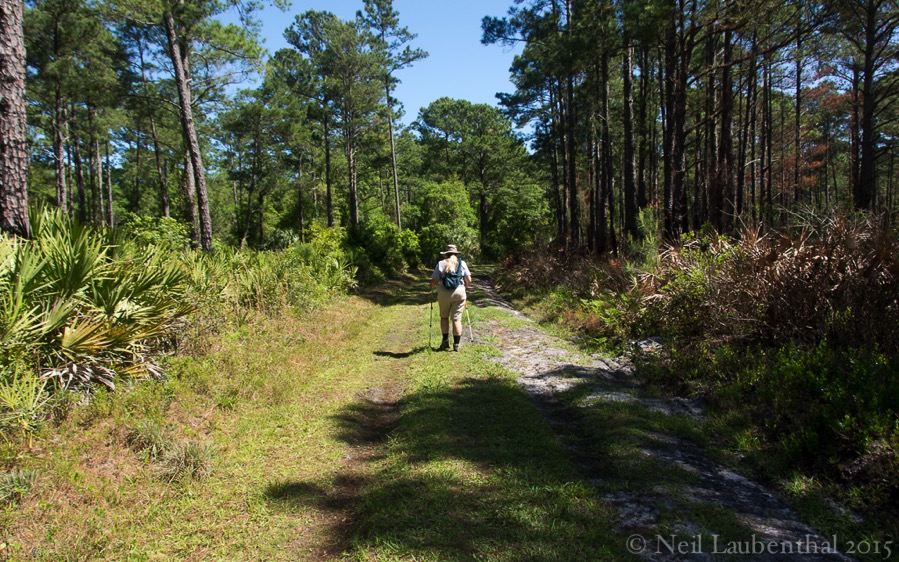 Although this isn’t the wet path we originally tried…it isn’t much wetter than it was where we changed our mind and turned back to the main path. 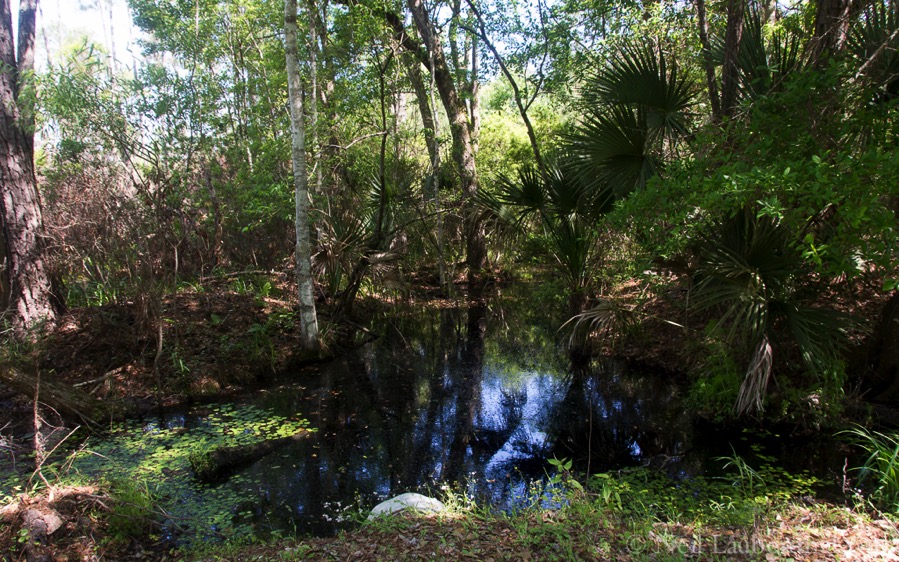 This was literally the only wildlife we saw…we did hear a couple of taunty birds up in the trees and a hawk of some sort off in the distance. We also saw a coot or moorhen or some small dark duck like bird out in the lake…but it was 3 or 4 hundred yards away and even with binoculars was pretty much a little black dot so we didn’t bother with a photo. 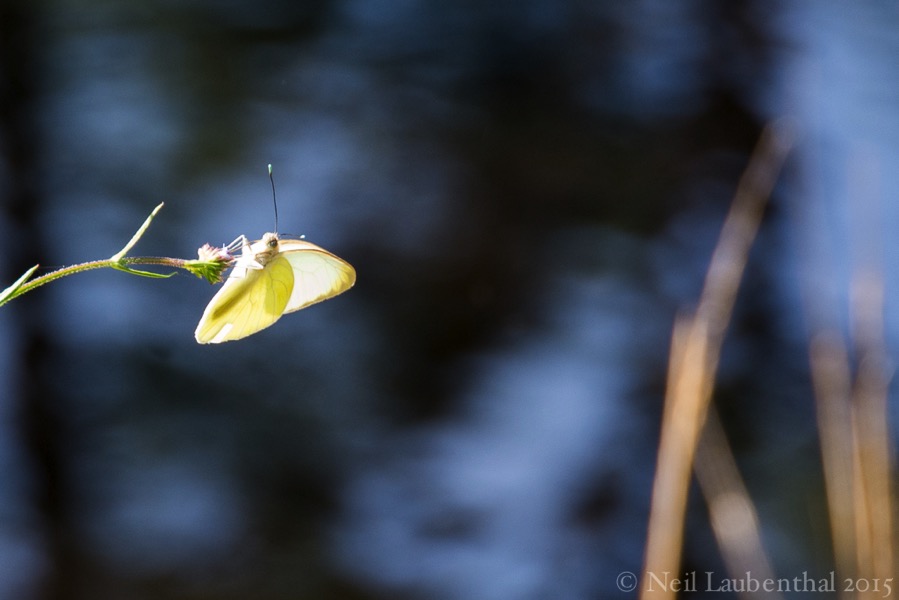 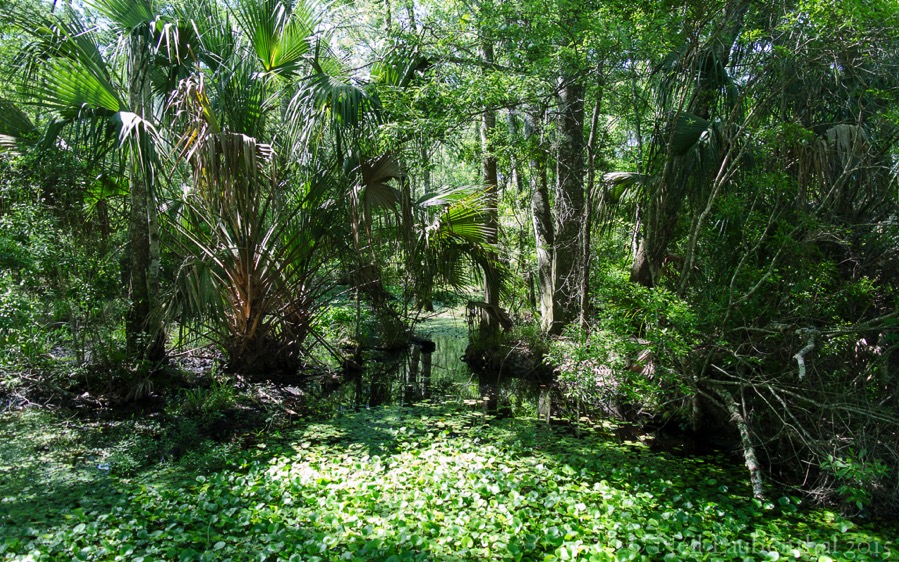 Our original plan was to ride down another 15 miles or so to the dam for another shorter hike but we were done in and decided that we had done enough exercise for the day…so we headed home instead with a couple of stops to get some fuses and a cold drink for the ride home.

Friday we did laundry…the machines here at Pelican Roost are free so we did sheets and also the 2 new sets of towels we bought as our old ones are pretty worn out after almost 3 years on the road. Over the weekend we again didn’t do much…Connie fished some and we went up to the 75 cents a scoop ice cream social in the evening after dinner.

Eats for the week:

Wings and brews at the Chief’s Club on Tuesday and went there again on Thursday for tacos. Friday night we went just outside the base and had grilled shrimp and scallops at Singleton’s Seafood Shack…a little dive sorta place over on the water. It was a little overpriced we thought…but I guess it’s location, location, location. Good food and cold beers. The only days we cooked in were Wednesday when Neil made some cream soup out of leftover wings from Tuesday night and Saturday night. Wednesday he added an onion and some half and half along with a can of green chilis and some habanero hot sauce and it made mighty good soup. Saturday we had a roasted pork tenderloin along with what Neil calls Gumbolaya…it’s sort of like Jambalaya as a rice dish made with Andouille sausage, onions, green chilis and V8 but he adds some file powder. File powder is finely ground sassafras leaves and is the spice that gives gumbo the distinctive gumbo flavor…it goes really good with this combination. Jambalaya is essentially the same as gumbo except the rice is mixed into the sauce and it’s got less protein in it than gumbo does…the latter has chicken or shrimp or whatever in addition to the Andouille. It was mighty good and we’ve got leftover pork and leftover rice for dinner after our travel day tomorrow.

Tonight we’re headed off to Culhane’s Irish Pub for some Guinness or Murphy’s stout and whatever seems interesting to eat.

We also upgraded all of our iOS devices to the latest software as it came out this week and we had pretty decent wifi in the campground building. Neil also got the latest laptop OS update but has only installed it on his laptop so far…it worked fine so he’ll do the file server and Connie’s laptop this week.

We got word that the next New Horizons Owners Group (NHOG) rally will be held next May in Chattanooga TN in mid May. We originally thought that it would be both later and further south in FL and were planning on skipping it as we are planning on a trip to the Canadian Maritimes in summer of 2016 and it leaves from Saint Andrews, New Brunswick right over the border from the end of I-95 in Maine on June 20. However…with the location and schedule we think it will work out just fine for us. We’ll just tool around the southeast from when we leave on April 1 for arrival up in TN in early May. After the rally we’ll stop by Midlothian to see the human kids and grandkid then head up through the middle of PA so as to bypass the traffic in NJ and NYC and I think we’ll likely stop by Boston for another week as well in that area before heading up to Saint Andrews.

We head out from here in Jacksonville tomorrow…next stop is about 190 miles up the road at the USMC Recruit Training Center at Parris Island SC. It’s located in Beaufort which is in between Charleston and Hilton head with Savannah also being within 40 miles or so. Connie again has a hike or two planned I think and we’ll check out the saloons in Beaufort before deciding whether to head off to one of those 3 larger cities. Connie wants to go over to Robert Irvine’s restaurant here (he’s the British guy on Food Network that does Restaurant Impossible)…but Neil isn’t much interested in paying inflated Hilton Head prices for a mediocre meal that won’t even be cooked by the guy whose name’s over the door…so I’m guessing we’ll pass on that unless there’s nothing at all in Beaufort. We likely will not be making another trip to one of our former best places to eat…Bowens Island Restaurant. As I recounted last spring the original small place had burned down and was rebuilt into a tourist monstrosity. The food wasn’t as good, neither was the service, and all of the dive ambiance that gave the place it’s charm is just gone in the new building. I guess the owners are making a bunch more money with more tables to turn…but it ruined what used to be a really quaint place to eat.