Well, we went ahead and headed out to Culhane’s Irish Pub for dinner on Sunday evening and had a great time. Connie and Neil had a pint of Murphy’s Stout then he noticed that they had Kilkenny on tap as well. This was one of our favorite beverages from our trip over to Ireland last summer…it’s an Irish Red brew but except for the color it looks, pours, and drinks just like a stout does. The bartender has to spend 90 seconds or so pulling the proper pint and it’s got that nice Guinness type head on it with the bubbles floating up to the top. You drink it and it’s got all of that creamy goodness that Guinness or Murphy’s Stout has…but it’s a red ale and has distinct red ale tastes to go along with the stout-like creaminess. Quite excellent…unfortunately we never found it outside of the Kilkenny area over across the pond and this is the first time we’ve ever seen it anywhere else.

So…we had a pint of Kilkenny to go along with our dinners…which was Crab Sliders for Connie and Guinness Marinated Sliders for Neil…except his was slices of marinated, roasted, and sliced roast instead of ground like most sliders are. It was quite tasty as well and after our dinner we headed home. We had pretty much finished up packing the outside stuff earlier in the day.

Monday we got up early, had breakfast and coffee then started to get ready to leave about 0800. We finished up packing, hitching, and utilities and were on the road about 0945 or so for the 190 mile jaunt up I-95 to Parris Island Marine Recruit Training Center which is between Charleston SC and Hilton Head SC. We got here and backed into site 7 about 1400 and were setup by about 1630. We noticed the last couple of weeks that both our gray and black tank indicators weren’t indicating properly. Last week on the move to Jacksonville we put about 30 gallons in the gray tank and added 2 gallons of white vinegar and a cup of degreasing dish detergent. Let all that slosh around during the move and on arrival in Jax dumped and flushed and seemed to have solved the gray tank problem. So…we got another 3 gallons of vinegar and did the gray and black tanks the same way again and after flushing on arrival here in SC the black is now also indicating correctly. So…we’ll just make this a quarterly maintenance item to keep the problem from happening again…it’s just the residue of grease/soap getting stuck on the sides of the tanks that causes the problem.

Here’s a shot of our setup in site 7. 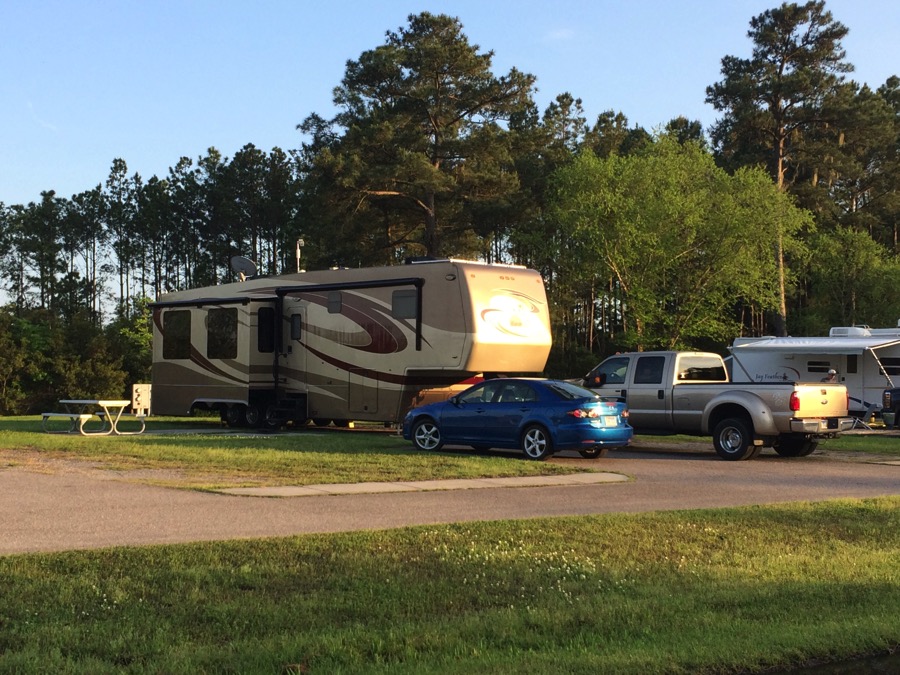 Here are a couple of shots that illustrate why you always trust but verify what the GPS tells you. The first one was taken after the shot above by Neil turing about 90 degrees to his left and looking back down toward the main road that comes into the campground. Down there on the right side of the road you can see the campground sign…the intersecting main road is just beyond there and we came in from the left and turned right onto this road…but only because we ignored what the GPS tried to tell us to do.

What the GPS wanted us to do was turn right about a quarter mile earlier and follow that road around to where it comes out immediately past the fire plug you can see on the left side of this picture. On looking at the entrance the GPS wanted us to take…we said to ourselves “No way.” Since we could see the rigs in the campground we just came ahead another couple hundred yards and turned right onto the road you can see above. Here’s a shot looking down the road where the fire plug is. 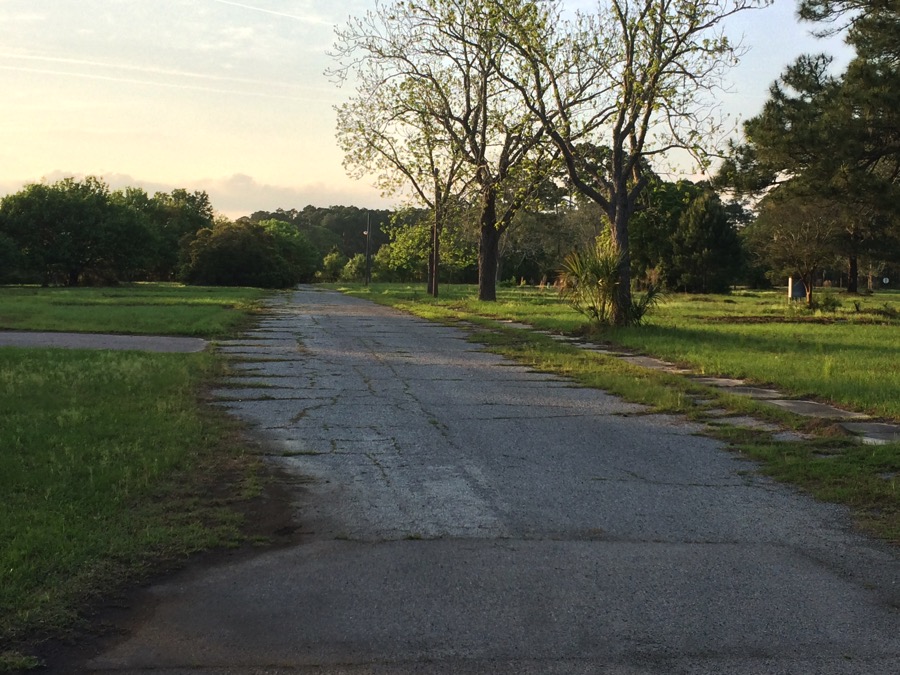 As you can see…it’s cracked and narrow and it gets even better. Just for grins we took this road back out to the main road when we left on our hike this morning…the rig is behind and to the left of where Neil was standing for this shot so we turned left here then down by the trees in the distance curved to the right then out to the main road. The trees on this road haven’t been trimmed in years and even in the car we had to jog around two low hanging branches so we’re very glad we didn’t come in this way.

Just goes to show you…you can’t always trust the box; you gotta verify that what she’s tellin’ ya is really what you wanna do. As it was…we had a little adventure getting into the base…there’s a roundabout right inside the entrance station that is currently being rebuilt into a new roundabout in a slightly different location with an inspection station. Long story short…we turned the wrong way and ended up down in a maintenance building area but found a place where Neil pulled in then backed out to get the rig turned around. Once that was down we went left instead of right were we made the mistake and shortly came to the road we were looking for…which was conveniently marked with signage to the RV park.

We had left over pork tenderloin and Gumbolaya but Connie didn’t feel like having that for dinner…so we went over to Fat Patties for dinner instead. We each had 2 pints of Newcastle Scotch Ale which was again mighty tasty. They have about 30 beers on draft and we sampled 3 of them before deciding that our first choice was the best choice. To go along with it we had burgers…Connie had a Beef/Bacon combo burger (ground bacon mixed in with the beef for some fat/juice) with cheddar and caramelized onions. Neil had the same burger but with more bacon, smoked cheddar, and caramelized onions. After that we headed home and watched TV until bedtime.

This morning we got up and after breakfast and coffee hit the road about 0930 for our hike. We were stopping by a local electrical supply place to get a fuse we need for the solar controller…it’s a spare for the ground fault detection circuit which we have disabled anyway as I discussed a couple blog posts back as our controller was originally designed for home use and not RV which has an ungrounded electrical system. Still though…good to have a spare for it in case we ever need it turned back on. They didn’t have one in stock but ordered 2 of them for him and will have them in on Thursday…plus the place is only a couple miles from the park so it’s an easy pickup later in the week. After that we headed off to the Pickney Island National Wildlife Refuge for some bird shots…I’ll have to do another post tomorrow with them as they aren’t done importing into Lightroom yet…but take my word for it…we got some great shots today. You’ll have to wait until tomorrow though.

Dinner was the leftovers from Sunday that we skipped last night along with a roll Neil baked for himself and some corn with cheese sauce. We kept the steak he inadvertently took out for today to have tomorrow.

Leave a Reply to this abundant life Cancel reply