Wednesday dawned with things looking like it would be a pretty decent day so after some breakfast and coffee we headed off for our planned Fun Stuff© activities for the day. Our first stop was to visit Fort Macon which is conveniently located in Fort Macon State Park and guards the entrance to Bogue Sound and the harbor at Beaufort NC. It was about an hour or so away and we wanted to be there for the Civil War musketry demonstration at 1000. It turned out that we had left too early and were there shortly after 0900…so we wandered into the visitor center to learn something about the history of the fort for a bit. The fort was constructed in the early 1800s to replace an earlier fort that had washed into the bay due to erosion and was designed to defend the port of Beaufort NC. At the beginning of the Civil War it was occupied without a shot by Confederate troops and remained in their control until 1862. Union troops showed up in early 1862 and commenced laying siege to the fort but didn’t actually attack until April 1862. By the time the attack started…the Union had discovered that although the fort was fairly well armed with cannon it had no mortars…the difference being that cannon are great for shooting at ships out on the water but not so much for shooting at emplaced artillery on land. The latter requires a mortar which lobs shells on a high arc and hence is able to attack enemy artillery positions. Once this was discovered…the Union brought in the relatively new Parrot 32 pound artillery pieces. The Parrot was the first rifled cannon and hence was more accurate and delivered a greater blow to enemy defenses and the Civil War was the first time that rifled cannon were used. With the fort having been built 60 years earlier and designed to absorb round shot from what was then the standard artillery round…combined with having no mortars for counter battery fire against the Union artillery…the Union was able to emplace artillery about 3/4 of a mile away. The Union also had some gunboats and floating artillery on the seaward side of the fort…but those had no effect on the battle as the fort’s cannon drove them off early in the engagement. Union bombardment of the fort started early in the morning of April 25 and fired about 1050 rounds with 560 of them hitting the fort or exploding overhead over the next 11 hours. The gunboats and floating artillery were driven off early in the engagement but the fort’s 60 year old 5 foot thick masonry/earth walls proved no match for the rifled Parrot artillery. With the walls breached and the fort’s magazine in danger of being detonated by enemy fire the Confederates surrendered and the fort remained in Union hands for the remainder of the war. Casualties were pretty low however…18 killed and 40ish wounded among the defenders and 1 killed and 8 wounded on the Union side.

After the war the fort was manned up through 1877 as a military prison then it was abandoned with a brief occupation during the Spanish American war in 1898. It was then abandoned and transferred to North Carolina as their second state park in 1924…then was taken over during WWII as a coastal artillery defense post with naval artillery installed then returned to the state after the war.

We headed over to the fort for the scheduled 1000 musketry demonstration about 0945…and discovered that it was almost over as the ranger had started it early due to a school field trip. What’s the point of having a schedule posted on your website if nobody is going to follow it…it was irksome but we did get to see the last couple of minutes of the demonstration and firing. Connie was surprised by how loud the musket was going off just about 15 feet away from us.

We then wandered about the fort for an hour or so taking photos and checking out the displays which included both Civil War, prison period, and WWII era artifacts.

An example of the mortars the fort did not have during the siege of 1862. 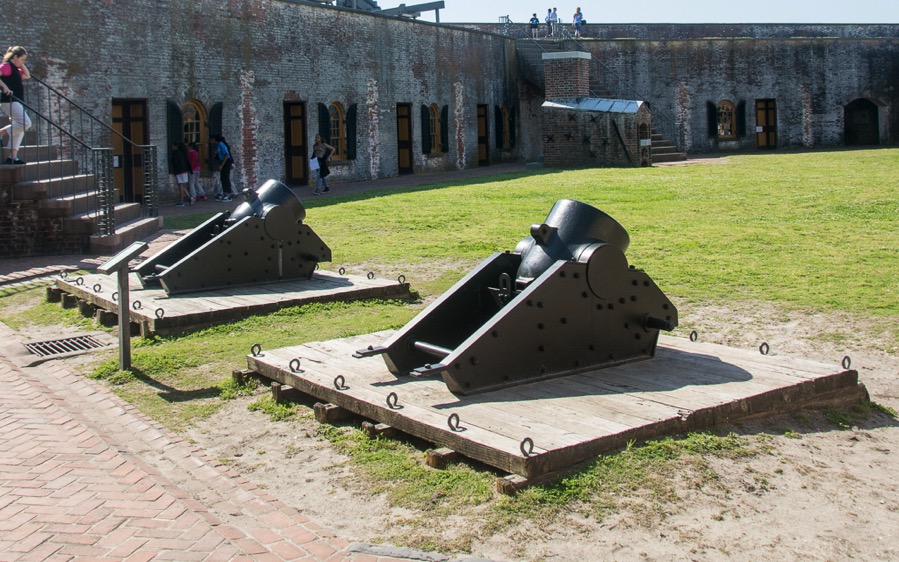 And one of the anti-shipping artillery the fort did have along with a panoramic view of the positions facing the entrance to Bogue Sound. The ocean is towards the right and the harbor to the left, back during the fort’s active use the ground between it and the water was cleared to provide an adequate field of fire for the artillery which had sufficient range to reach the far shore of the entrance about 2 miles away.

The interior of the fort from behind the seaward facing pieces in the second photo above.

Connie got a close up of one of the 32 pound pieces emplaced in the fort…these are believed to be the original artillery from the Civil War.

Down in the interior of the fort…a shot of what would have been a brass monkey if this was a shipboard artillery piece rather than land based…although the stacking would have been the same. Land based shell stacks used wooden bases whereas shipboard used a metal plate with holes drilled in it to support the lowest layer of the stock…the plate was known as a monkey and was frequently made of brass so as not to have corrosion between the rounds and the monkey. Unfortunately…brass having different thermal characteristics then iron shot…when it got cold the brass contracted at a different rate then the iron shot and when it got real cold the rounds would come out of the holes, the stack would collapse, and the shot would roll across the decking…hence the term “cold enough to freeze the balls off of a brass monkey”. 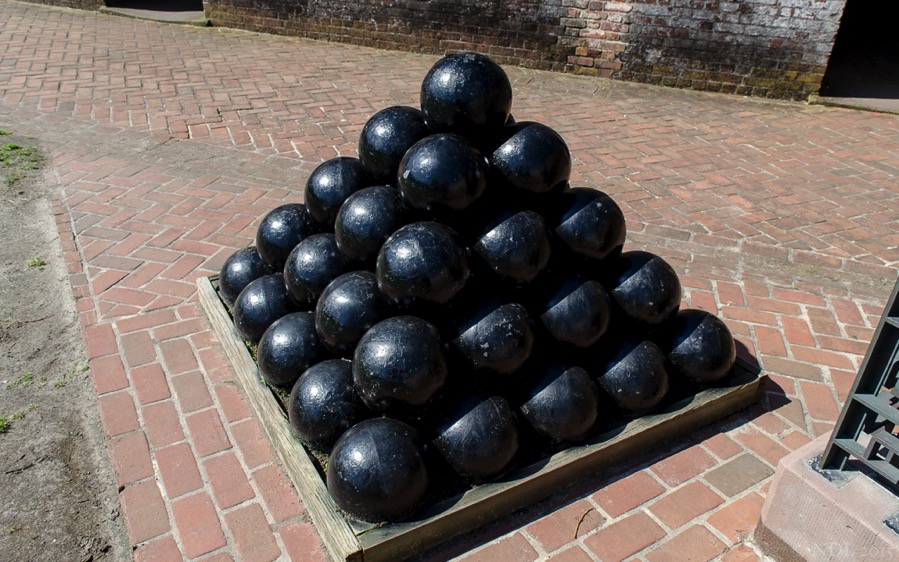 A shot of one of the storerooms and one of the hot shot furnace which back in the days of wooden vessels in the early part of the fort’s history was used to head round shot to red hot before firing it at the enemy…the idea being that round shot frequently stuck into the enemy vessel and would set it on fire.

The in between the walls section of the fort. Very similar in concept to the moat of medieval European forts it served to concentrate assaulting troops in the grassy area between the lower outer walls and the higher inner walls. This design improved on that of the moat however…by having counter-battery gun positions located underneath the outer wall and aiming down the trench. These gun positions had small charge cannons with grapeshot…essentially huge shotguns designed to provide area clearance of any invaders that got into the trench but with insufficient power to damage the walls while taking out invading infantry. 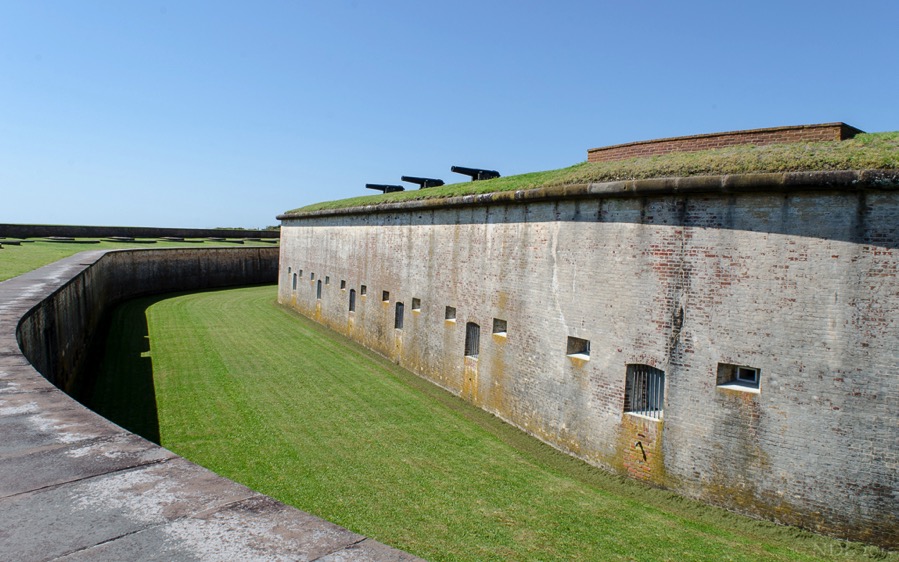 This is a carronade which is a small naval gun that originally mounted on small warships. Since the Confederate defenders had no mortars but did have some of these smaller, shorter ranged carronades…they were mounted on angled carriages in an attempt to provide some mortar like defenses to the fort with the ability to lob shells into enemy land based artillery…they were only able to emplace 4 of them and with their small shot size they were insufficient to effectively attack the Union artillery.

With that our visit was ended and we headed off to lunch and our visit to the Cedar Island NWR about another hour away.

Lunch was at a very nice place on the water in Beaufort named the Channel Marker Restaurant…you can see the namesake Marker 8 just above the railing in this shot Neil took of Connie at the table.

We each had their combo lunch with a cup of soup…clam chowder for Connie and she crab soup that was better than the other night for Neil…and a half oyster po’ boy sandwich along with a hard cider for him and a glass of wine for her…most definitely a great lunch looking out over the water.

After that we headed off to the Cedar Island NWR which is as far as you can go along the NC coastal islands heading north…it’s right at the bottom end of Pamlico Sound which (along with Albemarle Sound) is between the Outer Banks and the coast. There’s a ferry landing adjacent to the NWR which you can catch over to either Ocracoke Island (the last one in the Outer Banks or to Hatteras Island which is connected via causeways and bridges to the remaining islands up through Kitty Hawk, Nags Head and then back onto the mainland.

Didn’t see much wildlife…one canvasback duck that had no place to stop on the road and take a picture and we get get a couple of shots out at the end looking over toward Ocracoke Island. It was a nice day but after the almost 2 hour drive back home we were ready for a rest. We had a nap then some Linguini with bacon, onions, garlic and pecans for dinner…quite yummy as well. 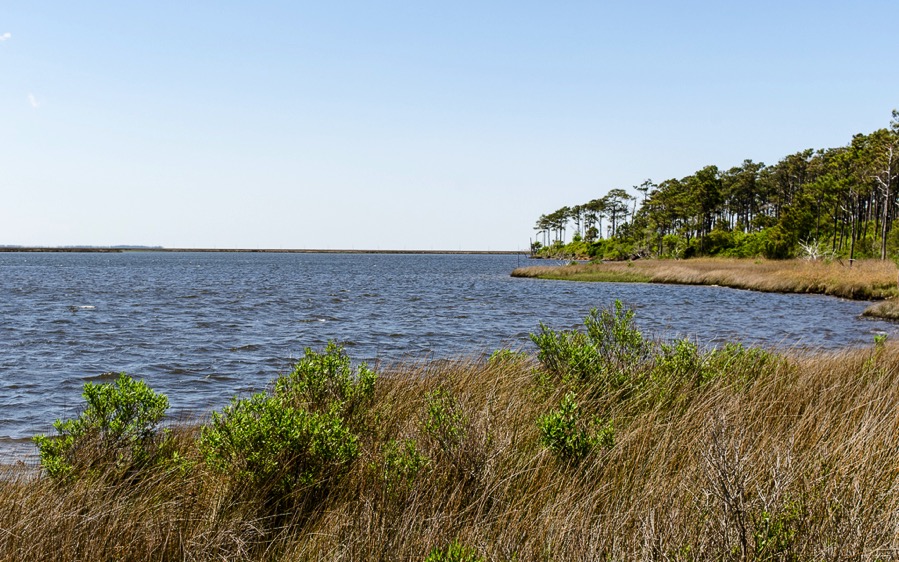 Today Connie’s working and after lunch we have another hike scheduled down south towards Wilmington a bit…then wings and brews for dinner at Hero’s on the base.

The full time RV travels and experiences of Gunther the Bear and Kara the Dog…along with their human staff neil and Connie.
View all posts by Gunther →
This entry was posted in Food, RV, Travel and tagged Cedar Island NWR, Channel Marker Restaurant, civil war, hike. Bookmark the permalink.