Out and About at Camp Lejeune NC

Today was a pretty interesting day. In the morning…after coffee and breakfast Neil went down to the bath house/laundry in the campground and ran two loads of laundry. While that was going on Connie worked and got some of her immediate jobs done as we’re planning on a day trip for a hike and lunch tomorrow. After that we had a couple of sammies made out of left over lemon pepper chicken from the other night.

When she wad done working…we headed out for a walk on the beach…we figured we would just walk a mile or so down the beach and back. Mostly we figured it would be exercise…but we forgot we were on a military base and hence we actually saw some Marines out training with their helicopters and boats.

Our first spot for the day…and this one was thanks to Neil and not Connie the wildlife spotter…was the extremely common Blonde on the Beach…we saw probably a hundred of this species today.

We continued on down the beach to the south and pretty soon came upon the Marine training I mentioned before. There were a couple of CH-53E Sea Stallions doing swimmer deployment training close to the beach. The Sea Stallion is the primary USMC heavy lift helo with the ability to carry up to 55 marines in ferry mode or 37 in combat rigged mode. It’s due to be replaced in the next few years by the V-22 Osprey tilt rotor aircraft but will likely continue in service until at least the mid 2020s. The helo would hover down to about 10 feet from the surface then the embarked Marines would push out their boat then jump into the water after which the aircraft would leave and the Marines would board the boat and motor to the beach. Once there they carried their boat over a quarter mile or so to the landing area and re-boarded for another round of fun. These two helos started about none and were still at it at 2030 when we got back from dinner. Here are a few shots Neil got of the troops in action. 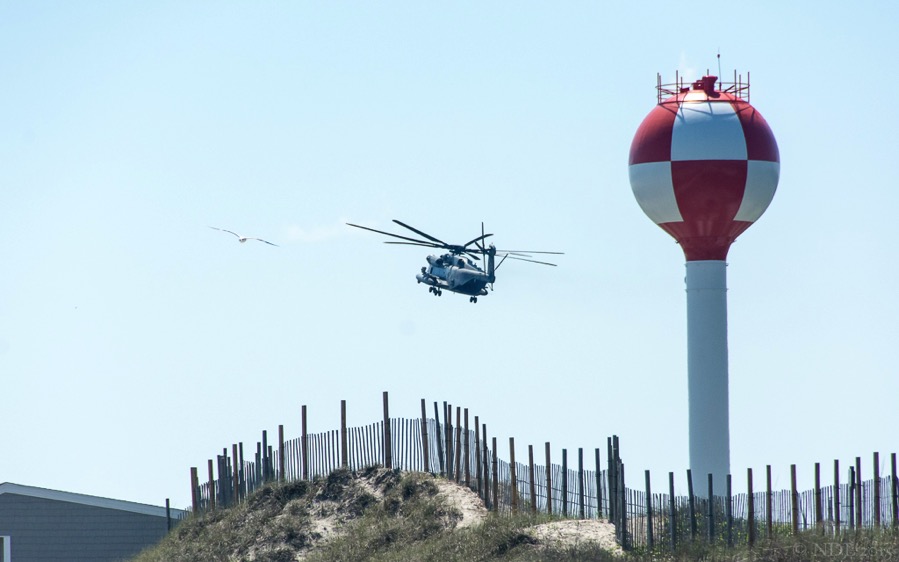 Deploying the raft out the back of the aircraft.

Followed by deploying the Marines out the back of the aircraft.

Heading to shore. You can see the boat approaching the beach just outside the surf zone.

One of the Marines coming ashore from the boat. I think she forgot her rifle! 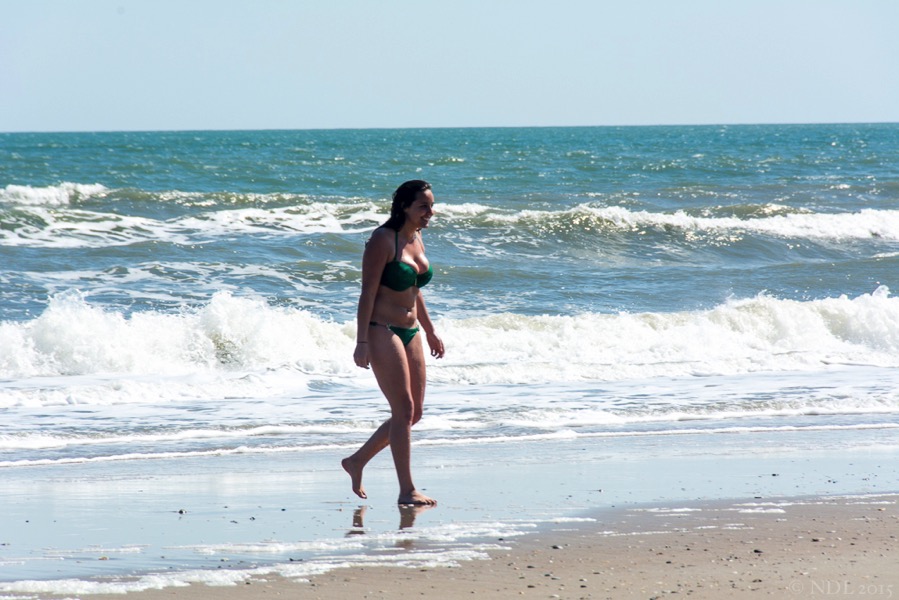 Along the way we also spotted this shore bird…a sandpiper we think; along with a shot of Connie checking out something she found on the sand and a shot of a laughing gull in flight. 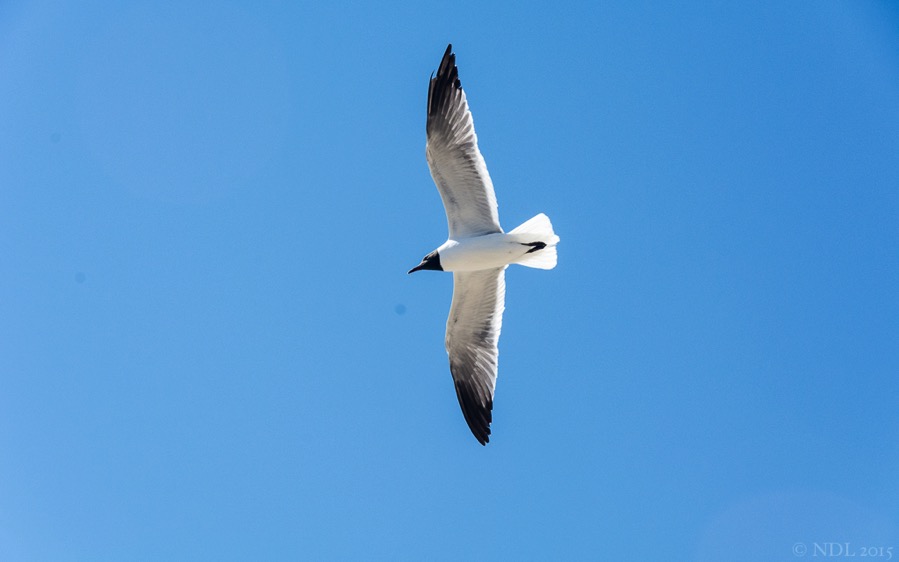 About this time we headed back and got back to the rig with about 2 miles of a nice walk down the beach and back. After sitting out in the recliners for awhile we headed off to the Church Street Irish Pub for dinner…they turned out to be closed for some A/C work so we went next door to the Saltwater Grill instead. We tried a beer flight which gave us 4 different beers in 4 ounce sizes. We tried a stout, a peach ale, and 2 brown ales. This allowed us to pick out what we wanted to have another point of and we ended up with a pint of the stout and one of the brown ales. All 4 were local craft beers and all were pretty good. To go along with it we had a bowl each of she crab soup (this would be crab bisque anywhere else but in the Carolina’s it’s called she crab soup instead) which was pretty good. After that we split a couple of appetizers…seared tuna and cheese steak egg rolls. The tuna was great and the egg rolls were good but not outstanding. After that we headed home.

Neil spotted these two pictures in his twitter feed today…the first is a half man, half woman creature and the second is a bathroom where you need really long arms.

He thought both of those were pretty funny.

Finally…a couple of photos that really bring home the fact that we’re staying on a military base. We noticed earlier in the week on the way in that both of the Marine bases we’ve been at they have signs at the gate that say “Pardon our noise. The sound you hear is the sound of freedom at work.” That was the first way we knew we were in a military town and then on the base today we saw a couple of road signs that really brought home the military base nature of our current surroundings. Ya don’t see signs like these every day…we saw the signs yesterday but got these shots on the way back into the campground this evening after dinner.

We can definitely agree that there are artillery firings in the area…we heard them most of the morning…every couple of minutes there was a boom in the distance.

Tomorrow is hike/lunch day. We’re off in the morning to a nearby fort area where there’s a Civil War musketry demonstration and then we’re doing lunch over on the beach and have a hike at Cedar Island NWR in the afternoon.

The full time RV travels and experiences of Gunther the Bear and Kara the Dog…along with their human staff neil and Connie.
View all posts by Gunther →
This entry was posted in RV, Travel and tagged beach, beer, blonde, helicopter, USMC. Bookmark the permalink.