Just a quick post to let you know we’re still alive but have really done nothing since my last post on the 29th.

Connie’s still sick…coughing and nose running and no energy. She doesn’t have any fever and so far hasn’t felt like going to the clinic on base was worth it as her cold pills are mostly dealing with the symptoms.

It’s also been rainy and windy the past 2 days…temps only in the 60s at best and 25-30 knots of wind constantly until today when it died off to about 10 or 12 knots, the sun came out and the rain stopped…but it’s still not very warm. So…we would have not done much even if she did feel better.

She did feel well enough…mostly because she had to…to go ahead and do what she needed to get done for her students going out soon and for the webcast with her first year students to give them the presentation on how to behave when you go out on clinical.

Neil took the Mazda over and got the A/C fixed…it needed a new high pressure hose so that was 530 bucks down the drain…and he got the part and fixed the broken sun visor clip on the drivers side while he was at the Mazda place.

Other than that we’ve done nothing…eating dinner in every night, watching TV, and lazing around during the day. Neil did get out and sewed up the rip in our LR slide topper…that’s kind of an awning thing that extends over the top of the slide as it extends outward and it keeps the leaves and trash off of the top of the slide and hence out of the inside when you pull the slide back in. The only drawback is that when it’s windy the slide topper bangs around and makes a lot of noise but that’s better than the alternative. If we spent lots of time out in the west then leaves aren’t as much of a problem and lots of people that RV mostly there don’t have slide toppers. Here’s a shot of where he did the repair so you’ll know what a slide topper looks like…the white section is where he sewed it up. 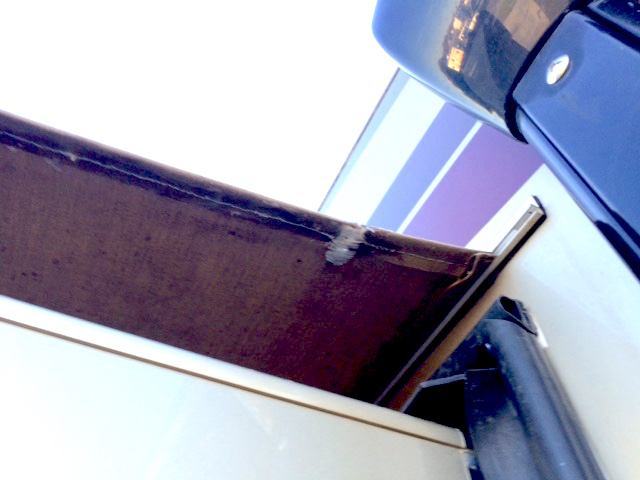 That’s about it…we might run out to the commissary later on this afternoon.