Well…we haven’t done much the past couple of days. Did a few minor touristy things around Dawson Creek, ate dinner with Bill and Linda every day, wandered around meeting the rest of our caravan folks as they rolled in, a few minor chores on our rigs…Bill and Neil fixed the bathroom fan raising mechanism on his rig, cleaned off our solar panels, and re-stowed some breakable and items we won’t be using for the next couple of months…and that was about it.

We did get down to downtown Dawson Creek and saw the (fake!) Mile 0 marker…the one I posted the other day is the real one actually on the AlCan but the city built another ‘Mile 0’ marker in the middle of downtown in hopes of getting more people to come downtown and see things. I guess it worked a little…here’s the downtown version of the marker and also some first nation people (the term used by those residents of west and northwest North America that are descended from humans here before the Europeans showed up) in a prayer ceremony. 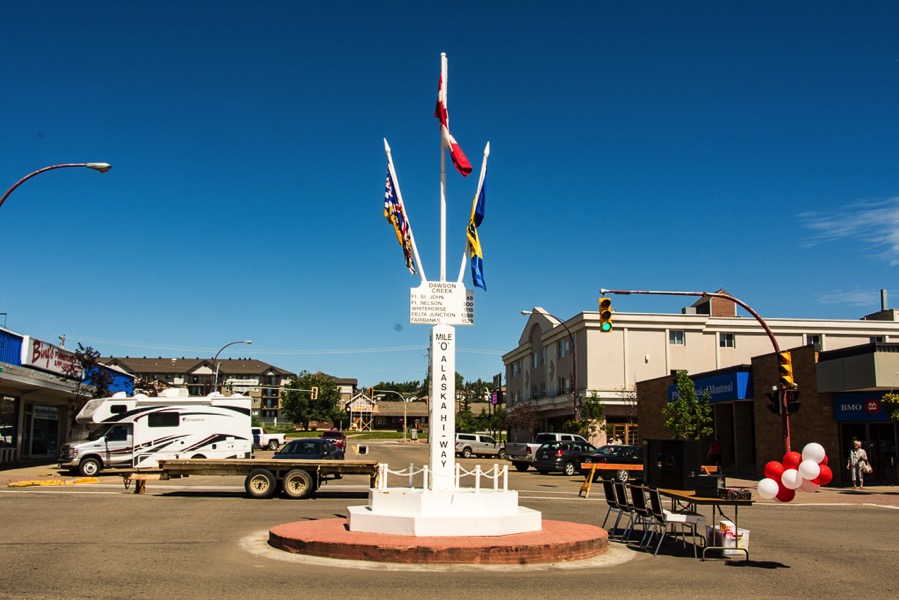 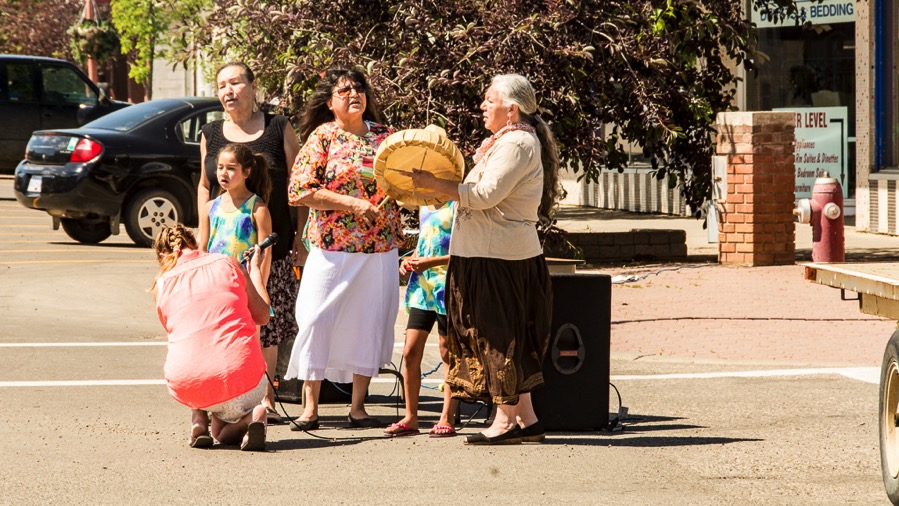 That’s about it…Dawson Creek is pretty small and once you’ve seen the marker and the bridge you’ve pretty much done it all. There is a pioneer fort tourist attraction place downtown as well…but we generally don’t do that sort of thing much so we passed.

Weather has been warm to hot…nice in the shade of the rig but hot on the roof or out in the sun and we’ve been running the A/C the past couple of days…only 1 at a time as we’re on 30 amp power though and we have to turn it off when we want to run the microwave or Breville oven or coffee maker. We are also somewhat limited in TV reception over the satellite antenna…the DirectTV birds are over the equator so they’re pretty low on the horizon here…Bill and Neil are continually grousing about having to rough it with only standard definition TV as some of the HD channels don’t have enough signal strength to lock on despite the antenna being able (barely) to see the bird itself. Ah…the hazards of roughing it I guess…luckily for us Connie recorded a bunch of movies and shows the last 2 months and we’ve got 100 hours or so of things to watch when we don’t have satellite visibility…which will be as soon as we get north of Whitehorse a week from tomorrow. At least we have cold brewskis and brownies Linda keeps making for dessert. Linda and Neil have been alternating cooking dinners…it’s no more trouble to cook for 4 than for 2 and that way only one of us has to cook each night.

We have our initial meeting with the group tonight in the building here at Northern Lights RV…then we’re off to dinner in town for a welcome celebration…then tomorrow we ride. First day is 283 miles straight up the AlCan to Fort Nelson then 3 shorter days to Whitehorse YK for our first more than over night stop. We’ve carefully plotted out where to get fuel as gas stations aren’t every mile like they are on our side of the border…Whitehorse has 30,000 people or so and is a decent sized town but the 4 stops on the way are pretty much the only places to get any. Up here…half a tank means make sure you know where your next fueling stop is. We have about 750 miles range with our aux tank so we’ll be fine…but if we were limited to the 37.5 gallons that the standard OEM tank has things would be a lot tougher.