OK…here’s the deal. I’m gonna label the posts on the caravan with day numbers…you’ll have to refer to the list and map below to figure out where we are on a post by post basis as you follow our trip. First…here’s the day to location correlation, for simplicity I’ve listed it by arrival date in each location; i.e., 2 is the day we arrive in Fort Nelson. Posts will be prepared probably in 1 to 3 days per post depending on photo density and I’ll post them in order when we have internet connectivity. Ya might wanna bookmark this post if you’re following along at home to make things simpler for ya.

And here’s the map that goes along with the days above so you can visualize where we are at on any given day. 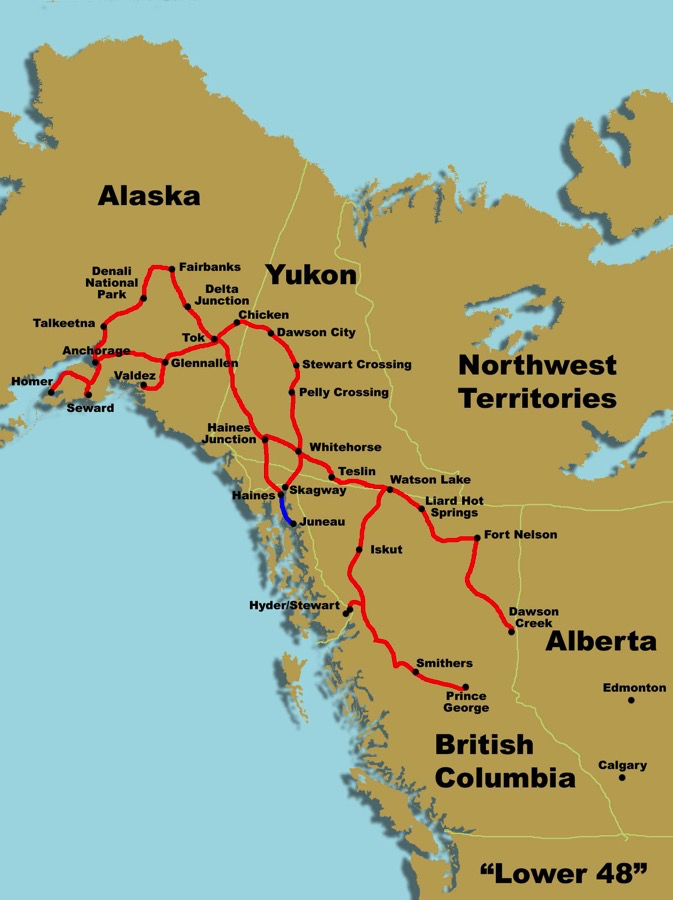 Day 1 had just a couple of activities in the evening. We had our initial rendezvous at Northern Lights RV with a presentation by the Dawson Creek Visitor’s Bureau…unfortunately this was at the end of our stay in Dawson Creek so most of what she told us was too late as we were leaving early the next morning. From there we headed over to the George Dawson Inn where we had a meeting led by our ringleader/wagon master David Baxley where we met the staff and each other, went over some basic ‘how does the caravan work’ stuff, and a pretty decent buffet dinner. Afterwards we trekked over to the Mile 0 marker again so we could get a group picture…as soon as Neil gets it from Dave I’ll post it so you can see our motley group. Here’s David giving us the scoop on the caravan before dinner. He was telling us how he wanted us to have an adventure…but a safe adventure. People were already complaining about the roads and dirty RVs today…Bill and Neil told them “ya ain’t seen rough or dirty yet’. One lady asked Bill yesterday at Northern Lights when we would get to the nice RV parks and was not happy when he replied…’you’re there already.’ 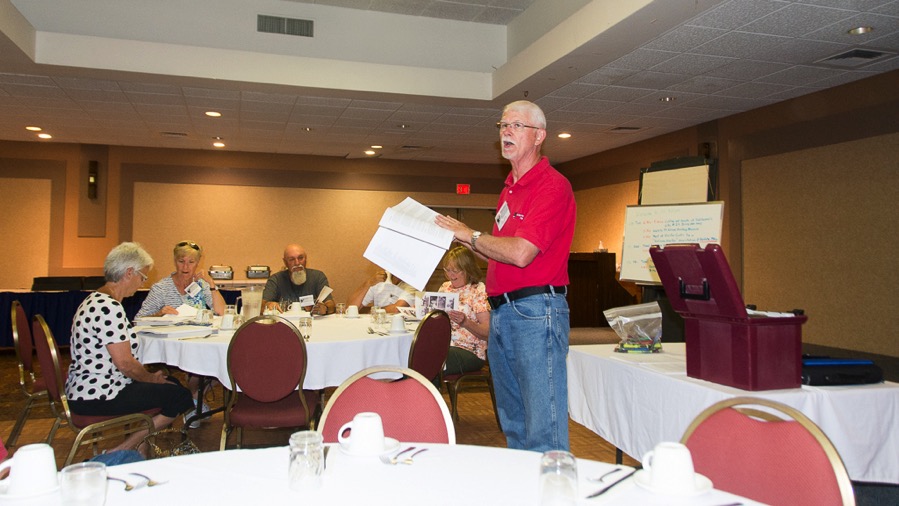 After the picture we went home and rested then got up really early Tuesday and hitched/left. We had 283 miles to go and had a scheduled caravan activity starting at 1530…so doing the math meant that you needed to be on the road by 0700…we hated it but we did it anyway.

First stop after leaving was the Suicide Hill Memorial…this is in memory of a hill on the original road that had a 24 percent downgrade as you headed north out of Dawson Creek…as you came up to the top of the hill you saw the sign that said Suicide Hill—Prepare to Meet Thy Maker. Normally a road would never be built with a slope this steep…but since the entire 1500 mile length of the highway was built in 8 months during early 1942 to support WWII operations convenience and good road surface were secondary considerations…the primary consideration was getting some sort of road through the wilderness that trucks could either drive or be towed up by tractors. Road surface ranged from mud to gravel to corduroy roads made of logs and since there was no survey previously done on the terrain the road was planned by sending somebody up a tree and he would look and say ‘let’s go that way’…getting some track through the wilderness was the only consideration. Once it was opened the road was somewhat reconstructed with things like safety and ability to get up and down the hills in mind in 1943…and the road was opened to civilian traffic in 1948 but wasn’t fully paved into well into the 1970s. 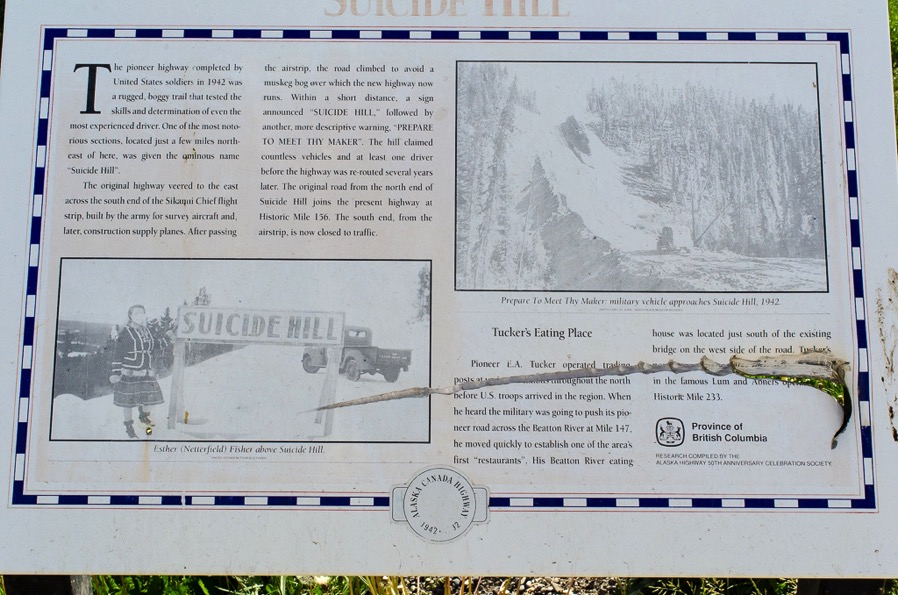 About 1000 we had our first wildlife sighting…a porcupine. I would not have posted this picture at all since it’s lousy…but felt we should make sure our first sighting was included in the blog. Connie got this shot quickly through the BAT’s windshield. 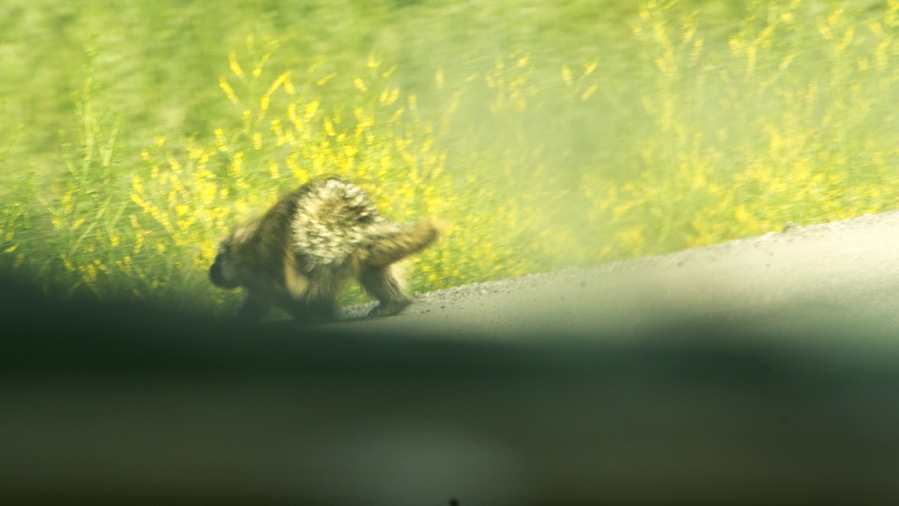 We did see a sub-adult black bear later in the day but there wasn’t any place to pull over and traffic behind us…so no picture…sorry. Here’s a shot of the AlCan itself looking northward as well as Mount Yakatchie. 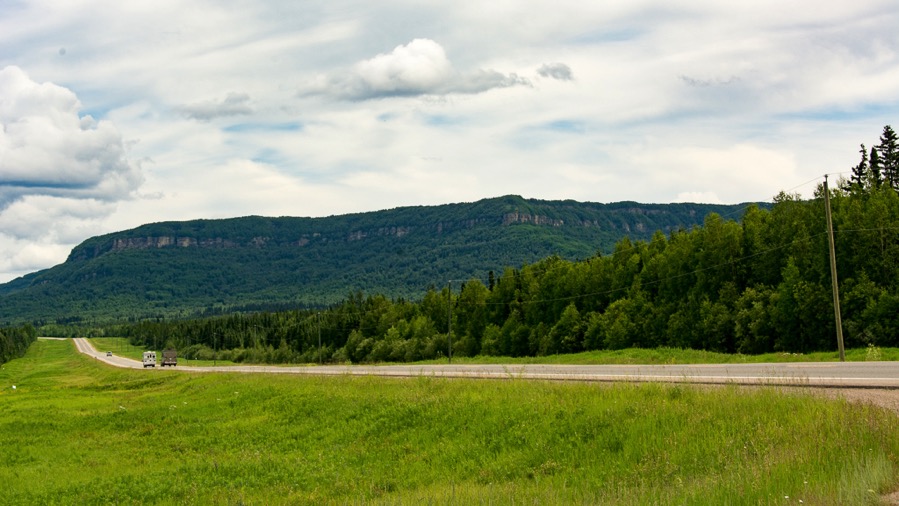 We pulled into Triple G Campground in Fort Nelson about 1430 and got quickly set up in site 91…no need to unhitch as we filled up with diesel on the way through town. Speaking of diesel…we paid 1.18 per liter today…this converts to about 3.68 a gallon in US currency and measurement. Our last fuel in ND on the way north was only about 2.79 or so…and by the time we get up in Alaska we’ll probably be paying 6 to 7 bucks a gallon. Expensive I guess…but it’s just part of the adventure.

With setup down we wandered over to the Fort Nelson museum that is owned by Marl Brown…who turned out to be quite a character. Here’s a crankshaft and pistols (the thing laying underneath the car shed sign and on the pallet to the right of the sign)…these parts are from a 3000 KW 16 cylinder diesel engine…the pistons are about 15 inches in diameter and 30 or so tall…pretty decently sized hardware, eh? 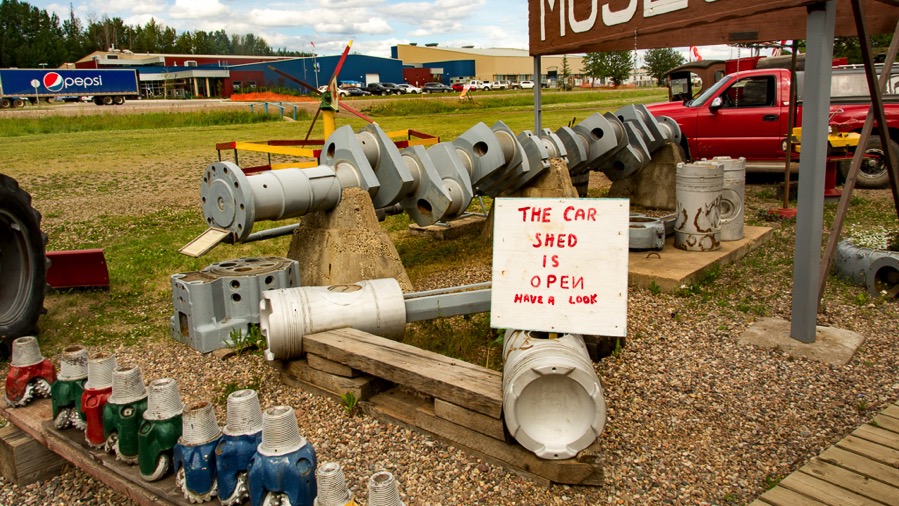 This bumper sticker is on the side of Marl’s 1920something Ford Model A pickup truck. 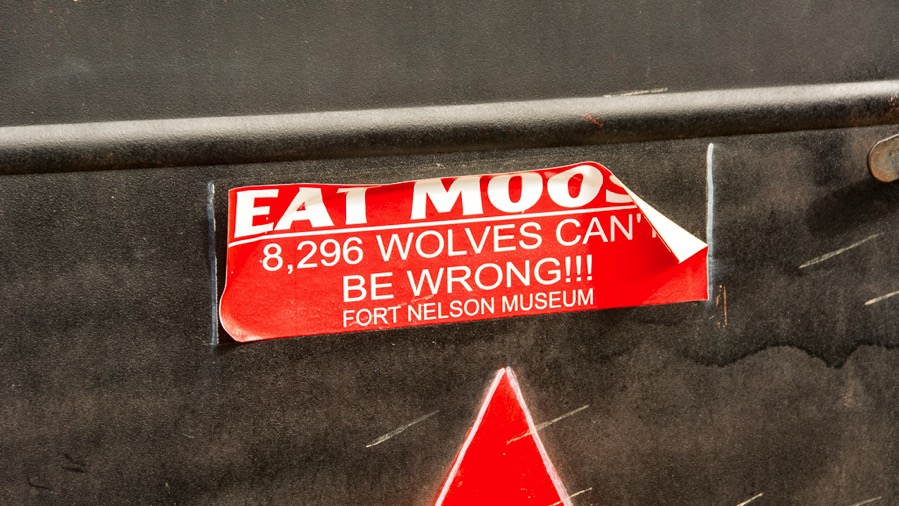 And here’s Marl Brown himself…he’s 82 years old and still turns wrenches rebuilding his antique cars. The one he’s standing in front of is a 1908 Buick Model 19 which he restored himself. Marl’s lived in Fort Nelson since 1957…a lady on the tour asked him if he lived here all his life and his reply was “well, all of it so far but I hope I’ve got some time left.” The Buick was driven as recently as last fall (it’s got a broken fan belt and finding parts for a 107 year old car is darned hard Marl said) and was driven round trip to Whitehorse YT and back in 2008 as part of the celebration of the car’s 100th birthday. 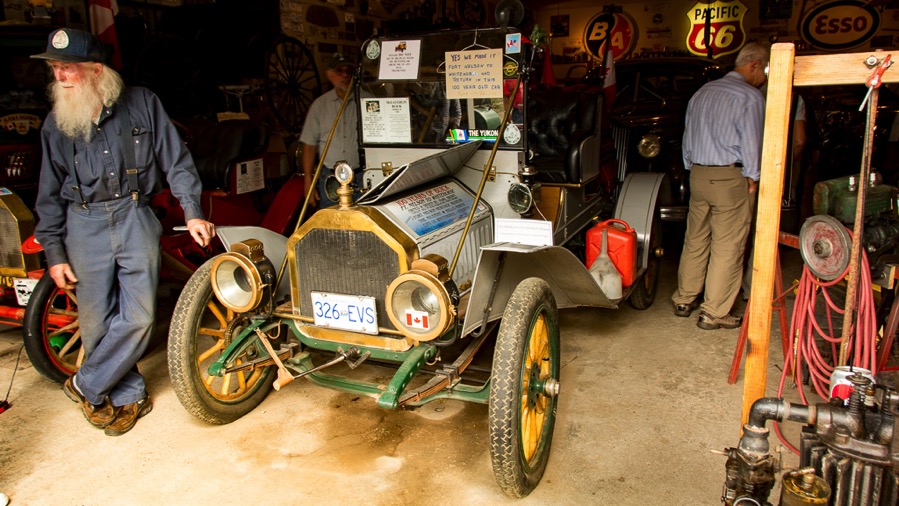 Afterwards Marl got on his bike and rode it around…notice how both wheels turn when you turn the handlebars to steer. 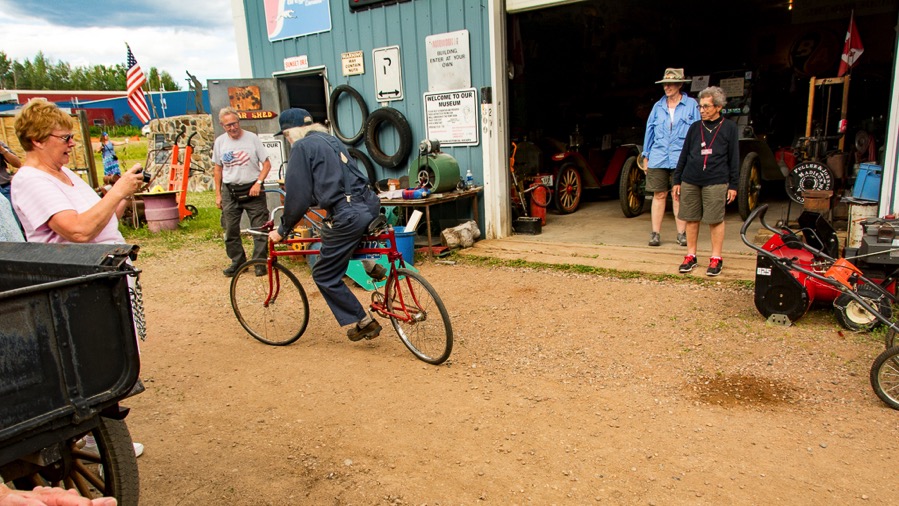 Next he started up his 1920something Model A pickup (the one with the bumper sticker above)…it’s not quite stock as he added an electrical starter when he rebuilt it…too hard at 70something years old to hand crank it he said. 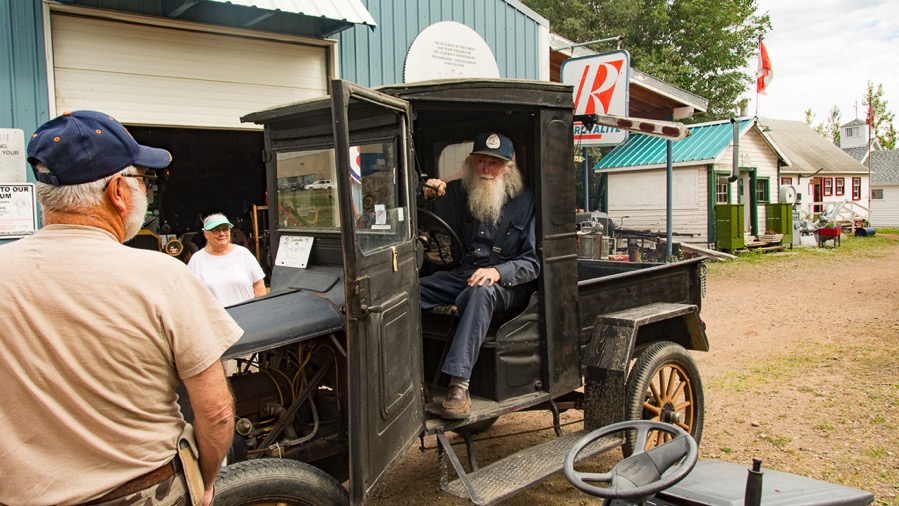 Last stop for the day was a shot of the Stone Sheep sculpture outside the museum…it was done by a local artist and is very nice. Stone Sheep are very similar to the Bighorn sheep down in Banff/ Jasper and in the US. 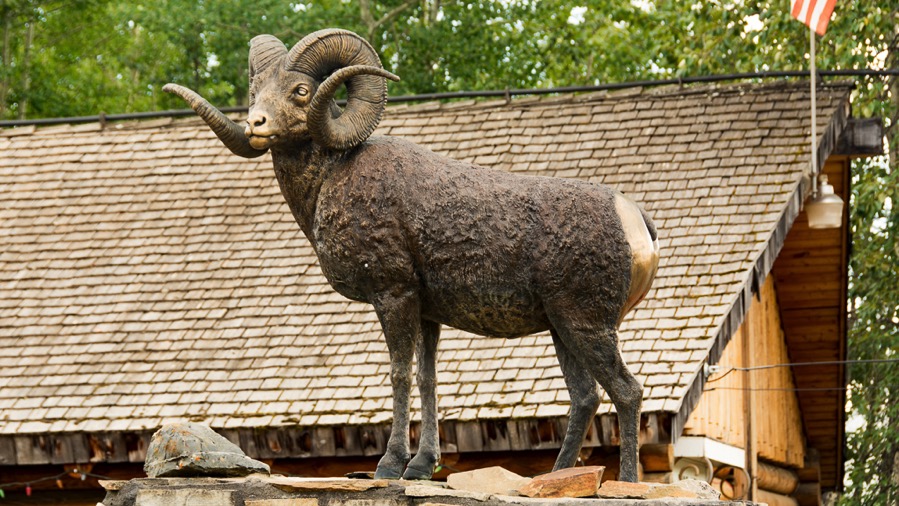 Neil and Connie passed on the optional buffet dinner at the campground…they decided it wasn’t worth 40 bucks and wanted to just laze around today…we’ve been going pretty steadily every day since we met up with Bill and Linda a week and a half ago. So…they split a can of chili with cheese and crackers that really hit the spot.

Tomorrow we’re off on Day 3 to Liard Hot Springs…the 183 mile trip has been noted by several folks as being among the nicest scenery of the trip and the highest animal density…we hope to see plenty. After our arrival we’ll get parked and then head on over to the hot springs themselves for a soak before dinner.