Days 13 through 15 (July 11-13) were strictly travel days…so not really that much to report although we did have a couple of scheduled activities.

Day 13 we traveled from Destruction Bay YT to Beaver Creek YT about 30 miles from the international border.

Day 14 we traveled to Tok AK after crossing the border and then had a scheduled visit for a talk by a guy that drove in the first Iditarod Sled Dog Race back in the 1970s and a visit to a gold shop where we got to hold a 57.something ounce gold nugget. The owner’s husband was prospecting up in the 40 Mile River area in Alaska about 40 years ago and they were stripping off some overburden…overburden is the non gold bearing dirt that sits on top of the gold bearing gravel underneath and is typically stripped off late in each summer mining period up here in the north. That way the permafrost containing the gold bearing gravel will melt in the spring and hence be mineable next year. Anyway…while stripping the overburden off some mining operations go ahead and run it through their sluice box (the part that separates the gold flakes from the gravel) since the plant is running anyway. So he ran the overburden through and found the nugget we got to hold in the top six inches of dirt that was removed. While not the largest nugget ever found by any means…it is worth about $65K or so based on it’s weight and the price of gold but as a large nugget is worth more…the owner has been offered a quarter million dollars for it but says she’s going to will it to a museum on gold mining here in Alaska.

Day 15 (Monday July 13) we traveled from Tok AK to North Pole AK…which is about 13 miles east of Fairbanks and we’ll be here until we leave for Denali National Park on Sunday.

So…on the the pictures we got during our three travel days…along with a couple more words later on when I get to the sled dog and gold nugget on Day 14.

A shot and pano of the Tanana River which parallels the highway for miles. This river doesn’t have a very well defined channel for most of it’s length…but is what is known as a braided river for the many seasonal paths it takes with sandbars and gravel bars moving almost weekly. 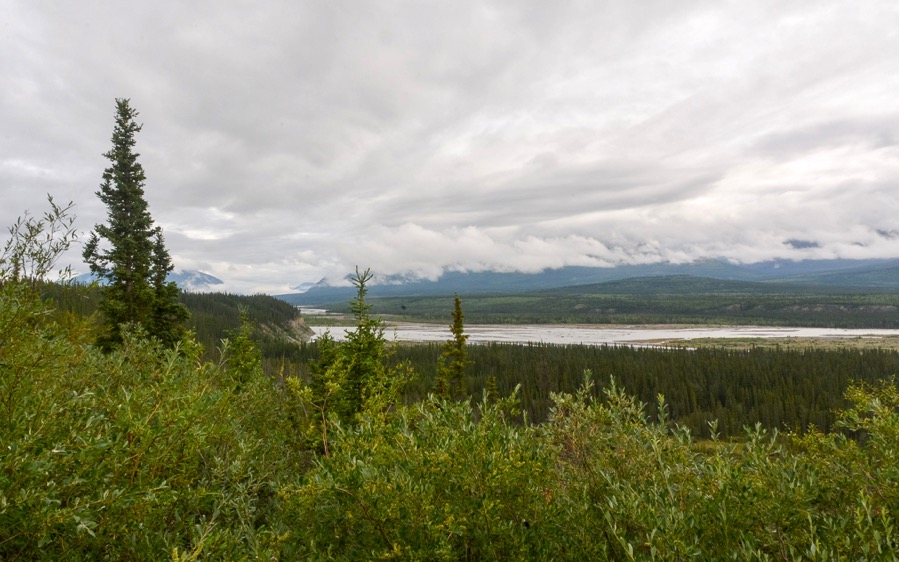 A couple of lake reflection shots. 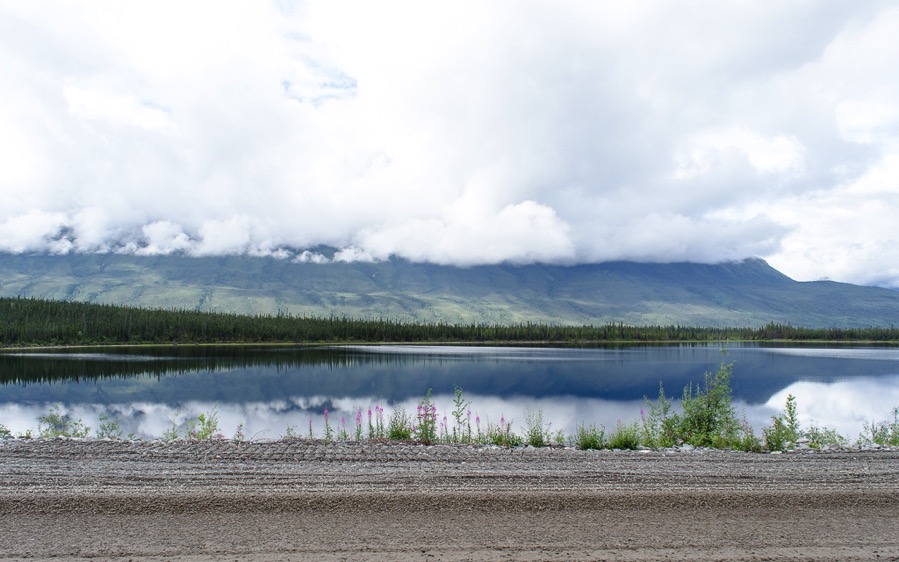 The Catholic church in Beaver Creek YT…we missed Mass as it only has services every third week and this wasn’t it.

Day 14 (Tuesday July 12) we traveled to Tok AK and changed our clocks back to Alaska time for almost the next month.

A cache at the Tallin NWR. Caches are used to protect food from both the weather and bears up in the north.

The visitor center at Tallin…one of the chores you have at this NWR is to mow the roof. The sod actually serves as insulation for the roof of the building.

The obligatory “we were there” shots at the Alaska border. Our friends Bill and Linda Napier are on the left side…they’re the ones with the New Horizons with the suspiciously similar paint job to our home.

A couple of shots of the border itself…the first is where the line passes through the parking lot next to the sign and the second shows the cleared (by the International Boundary Commission) but un-fenced and un-patrolled border. The cleared section goes completely across the border from the Arctic Ocean to the south…you can see it faintly on the far ridge…it’s the little notch in the tree line just between the top point and left side of the marker. 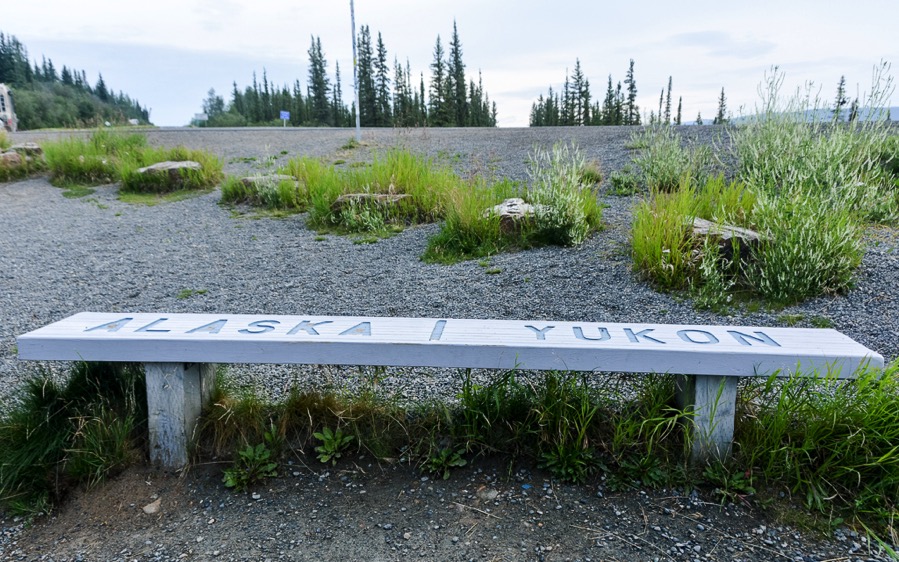 A swallow nest at the Tallin NWR visitor center…complete with swallow.

The far dog sled was used in the first Iditarod Trail Sled Dog Race. This race happens in early March each year from Anchorage  AK to Nome AK and commemorates a high speed dog sled run between the same places in 1925. A diphtheria epidemic had broken out in Nome and native children had no immunity. The nearest supply of vaccine was in Anchorage and no planes were available to deliver it…so it was  put on a train up to Nenana and then passed on to the first of 20 mushers who delivered it the last 674 miles to Nome in five and a half days. Each musher can start with a maximum of 16 dogs and must finish with at least 5…no replacements are allowed…and each must visit various checkpoints where both musher and dogs are checked for health and supplies before being allowed to continue. Racers set off from Anchorage at 2 minute intervals and total elapsed time on the trail between checkpoints is used to determine the winner…the race record is a bit over 8 days and 13 hours.

Dog teams are composed of the leader, two wheel dogs at the front of the sled and various pairs of dogs in between them. Mushers typically have several dogs that are capable of being the leader and rotate them through the day depending on what characteristic the lead dog needs at the moment…good at running in a blizzard, good at finding faint trails, or good at setting a fast pace.

Our talk was given by the musher who drove the far sled in the first race. 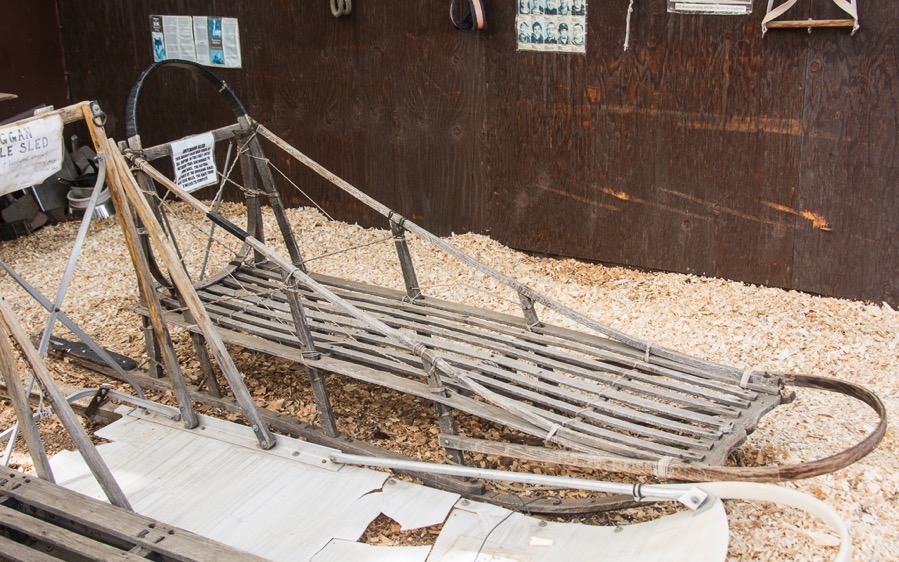 Three sled dog puppies…they’re for sale, and only $500 each. 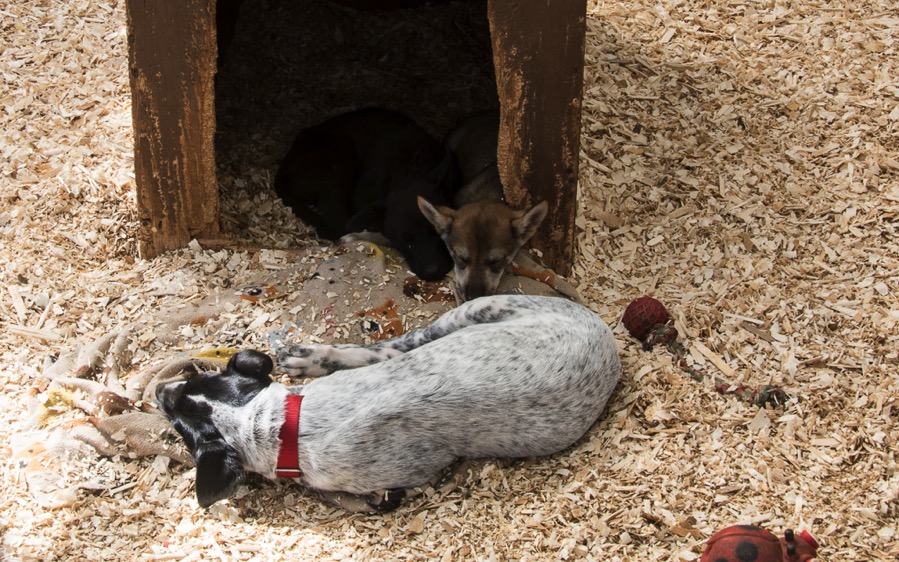 Sign on the gift shop next to the sled dog demonstration.

Connie holding the ginormous nugget and then a closeup of the nugget itself. It’s gold which is pretty heavy…this nugget weighs almost 4 pounds. 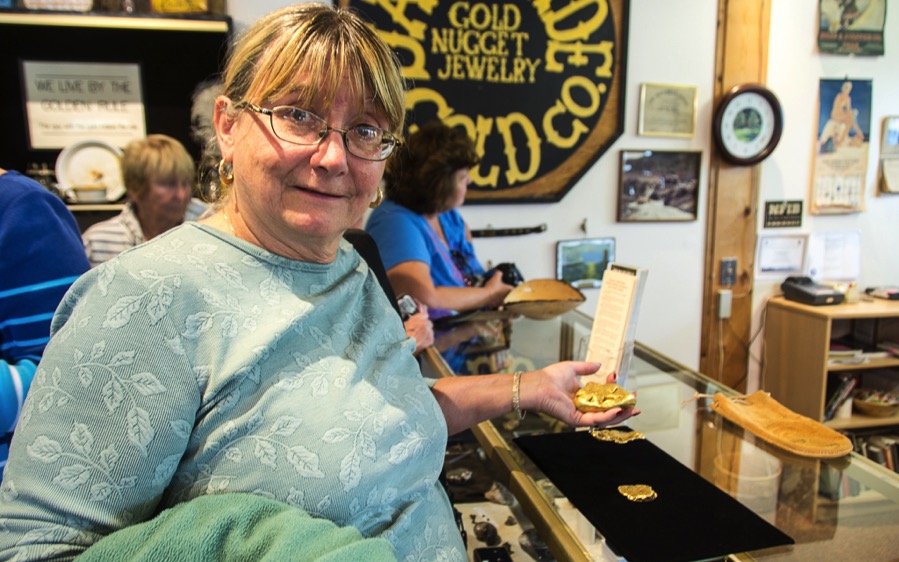 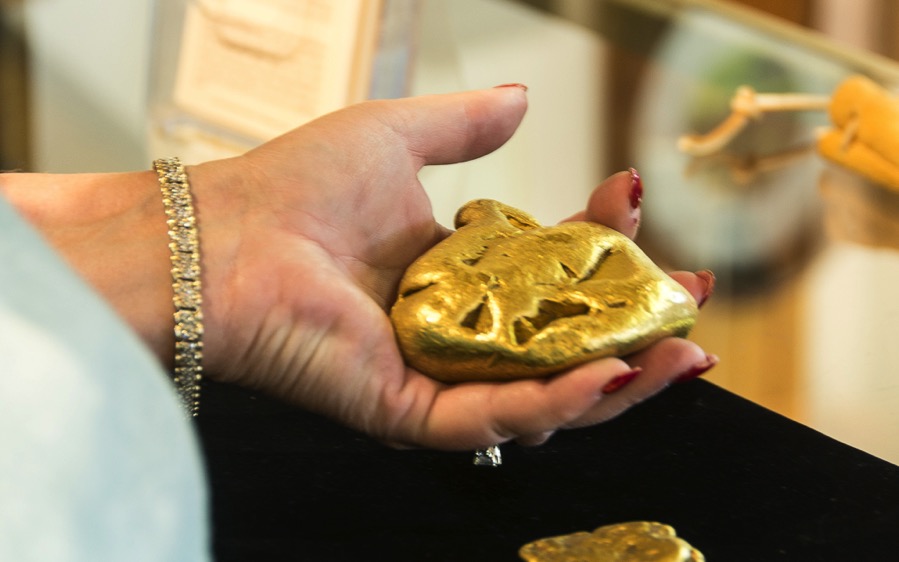 Day 15 we set off from Tok AK to North Pole AK right outside of Fairbanks. 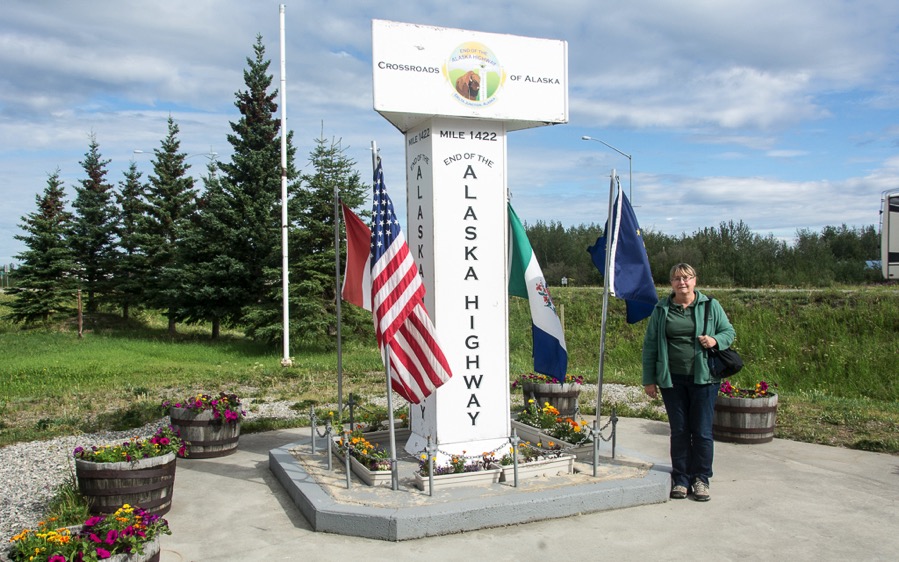 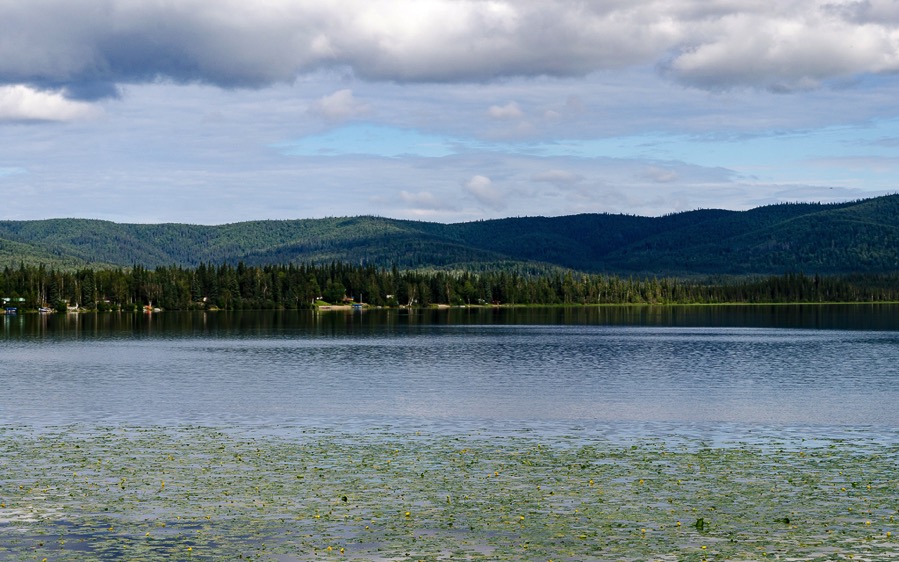 We did see…finally…a couple of moose on the last leg of the trip but both were while we were at speed on the road with no place to pull off…and both cows were hightailing it for the woods anyway so no photos were possible.

On arrival at North Pole…we were ready to sit for a few days…arriving on Monday about noon with departure not until Sunday. Neil helped Bill troubleshoot and achieve temporary repairs on his door latch until the replacement parts arrive in Anchorage at our stop there mid next week. After that Neil asked Bill to help him figure out why our basement doors were not shutting properly…Bill’s response was “You need to water your doors.”

Turns out that he was exactly correct. Most RV doors are made by the Challenger Door Company and the hinges are essentially 2 long C shaped tubes. One is fixed to the side of the rig and the second to the door with the 2 C shaped cross sections mating and one slides inside the other. The problem is that the fixed tube on the rear basement door actually faces forward…and with all the dusty roads in the Yukon it just gets filled up with this almost talcum powder fine dust which prevents the one on the door from sliding inside it. Sure enough…Neil got out his skinny/flexible water heater cleanup wand, attached it to a hose and rinsed the intersection area of the tubes while wiggling the doors up and down…and voilà the problem is solved. The basement door now works again…so he went ahead and rinsed out the hinge areas of all our outside doors. We’ll probably have to do that again once we get down out of the dusty road conditions I guess.

I’ll post again later this week…we have some scheduled activities in the Fairbanks area the next couple of days…then on Friday we are off for an optional part of the trip…a flight up to Gates of the Arctic National Park and Anaktuvuk Pass about 150 miles north of here.

Fairbanks is the farthest north that we’ll take the rig…from here we head south about 300 miles to Anchorage then meander eastward along the SE coast through Homer, Seward, and Valdez before heading back up to Tok again in a couple of weeks…then northwards to Chicken AK (albeit it not quite as far north as Fairbanks is). After that it’s slightly south of East to Dawson City YT then southwards through Whitehorse again (we saw a weather vane there at the airport made out of an entire DC-3 airplane…gotta go back by and get a shot of that for ya…then southwards through YT and BC with a trip back into the far south part of Alaska at Hyder before the trip ends in Prince George.