We only had one full day at Devil’s Tower WY but we made the most of it. First and foremost…we slept in as we had nowhere we had to particularly be at any particular time. Once we finally rolled out around 0700 we had coffee…and breakfast consisted of blueberry muffins that Connie snuck into the basket at Walmart yesterday when we wuz grocery shopping. After that we had some paperwork chores to complete…got our stops and campsites picked out for the transit eastward from here to Indianapolis, paid some bills and Connie answered a couple of important work emails.

For lunch we had a leftover pork chop sammy…Neil grilled a couple of them last evening along with 2 ears of corn and that was dinner with enough pork left over for lunch today. We thawed out a couple pieces of halibut that he’s grilling for dinner.

Once lunch was over and the weather had turned from mostly cloudy to mostly sunny we headed over to Devil’s Tower to take some photos, walk the 1.3 mile trail around the base and generally get out in the world to do something.

So…what’s Devil’s Tower you might ask? It’s most famous as being the place where the aliens landed in the movie Close Encounters of the Third Kind. Essentially it’s the remnant of some crystalized magma (molten rock) that was harder than the land/rock around it so that when the softer stuff eroded away the tower remained. The base is at about 4,200 feet and the top a bit over 5,100 feet and it’s pretty much a 900 foot tall vertical rock. It’s formed of hexagonal columns very similar in concept to those at Giant’s Causeway in Ireland except these are larger columns. Instead of the 1.5 feet or so across each column these are 20-40 feet across…but otherwise they’re very similar.

Geologists are still arguing over the exact formation process…one theory is that the magma forming the columns crystalized and solidified before it got up to the surface, another theory is that it was the stem of a large mushroom shaped chunk of solidified magma and the cap of the mushroom fell off, and yet another theory is that it solidified in the vent of a volcano before it erupted. No matter…essentially the hot magma got up near the surface and solidified. The crystallization process caused stress points in the rock which resulted in cracks and when the cracks collided they formed columns of 4, 5, 6, 0r 7 sides…the number is based on the type of crystalline lattice the rock forms but I won’t bore ya with all the details.

After that we wuz tired so we came home and had a cold brew (Redd’s Apple Ale to be precise) then Neil cooked dinner. We’ll head off in the morning about 300 miles east for an overnight stop near Chamberlain SD.

A couple of shots Neil went out and took last night…he thought some long night time exposures of the tower would be nice. Notice how the stars got turned into light lines by the 4 and 6 minute exposure times he used for these two shots. It was so dark that you could not see the tower with the naked eye when he took these about 2130.

A view of the tower from the campground…standing right next to BAT when we took this one.

Prairie dogs…they’re just rats essentially but they sure are cute li’l varmints. 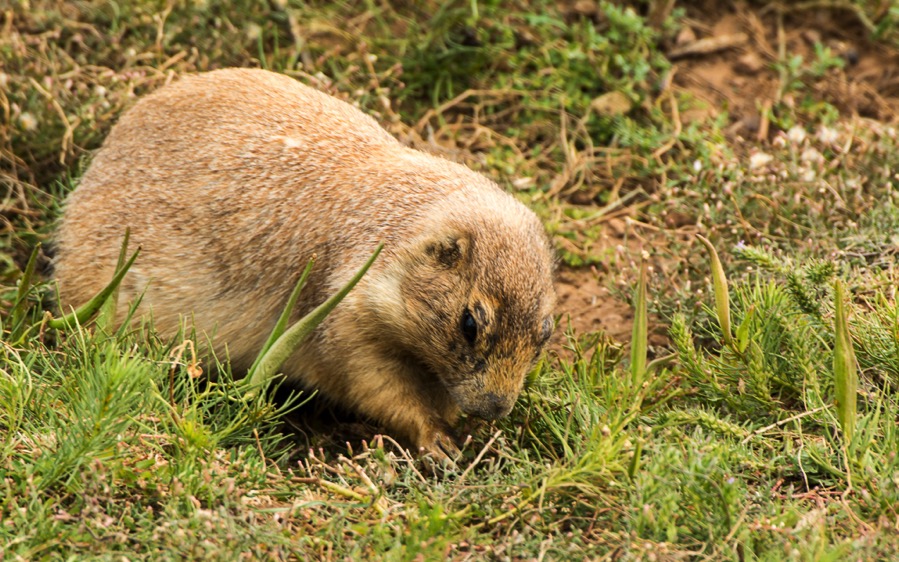 This is probably the single most famous view/photo of the tower…based on it we thought that the tower was out in the middle of the plain sticking up but it’s actually in a pretty hilly, almost mountainous area with lots of valleys and ridges surrounding the tower. 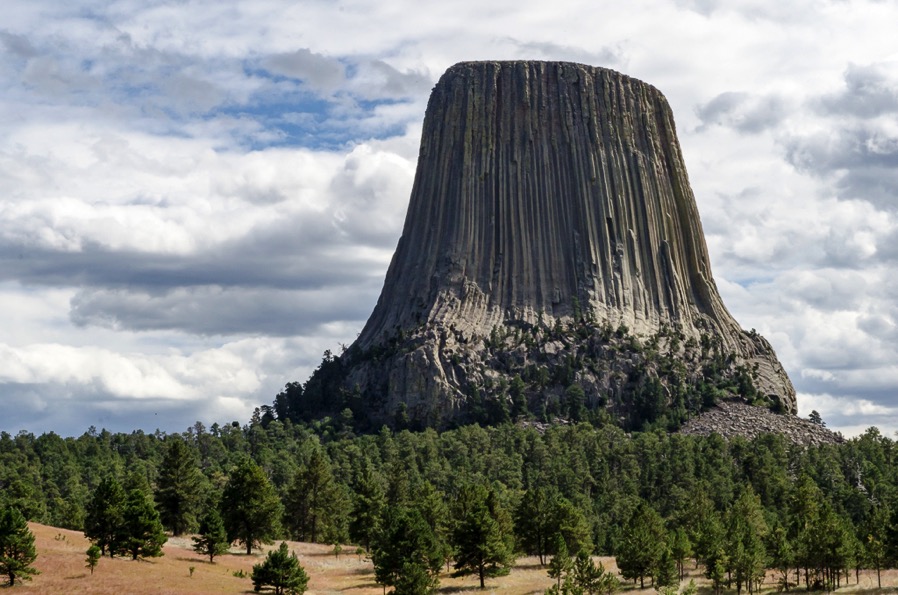 Lookee see…I spy something up on the tower, just below and right of center…I wonder what it could be?

It’s a couple of Climbing Rangers coming down from the top. 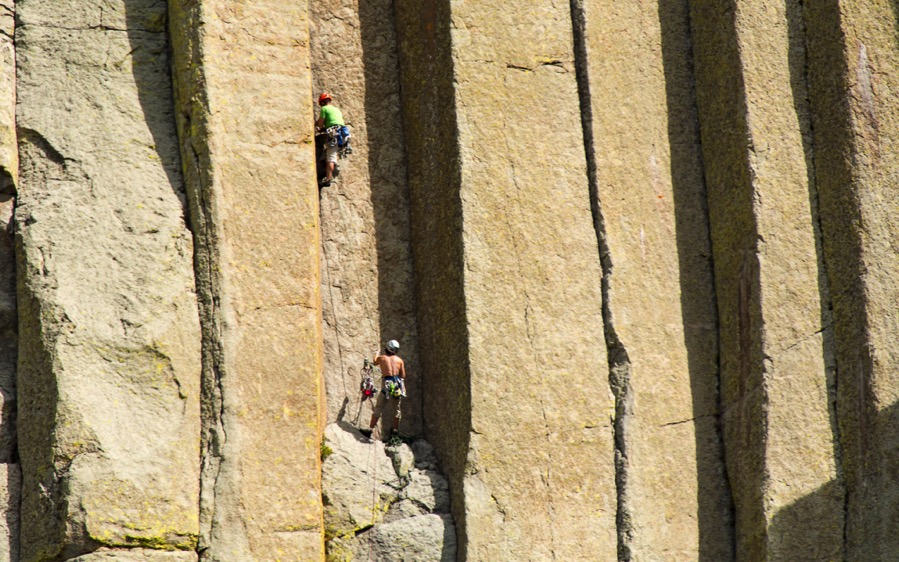 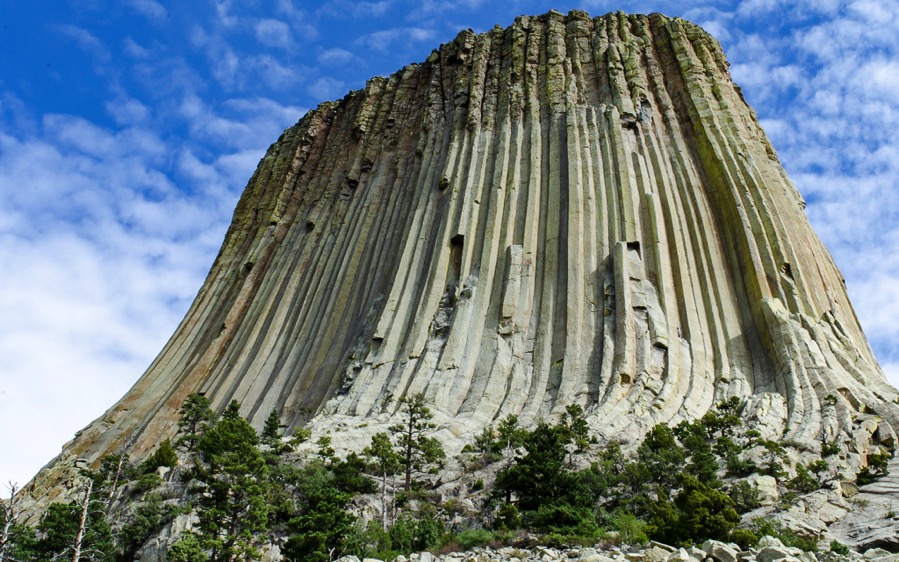 Extreme wide angle shot from an unusual perspective…notice the boulder field surrounding the tower…all of those boulders used to be part of the tower. However, no significant pieces have collapsed since the monument was established in 1906 so it will take 500 bazillion years for it all to erode away I reckon. 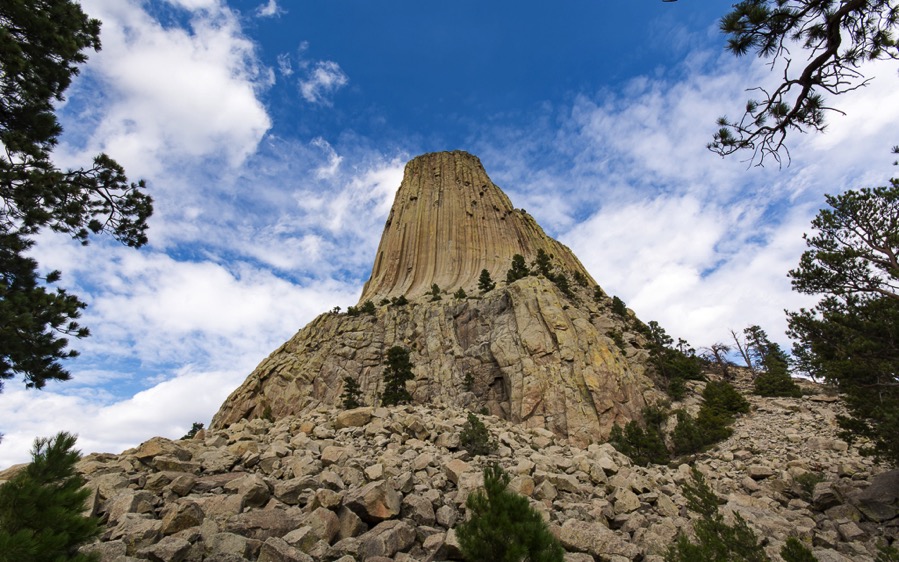 Pretty impressive chunk of rock…and the hike was quite challenging despite being (a) paved and (b) only 1.3 miles long. The problem was that it was at an elevation of over 4,200 feet and there ain’t as much oxygen as down at sea level.

Off eastward in the morning…25 or 30 miles back down the 2 lane road to the freeway…then we’re going to stop in Box Elder and pick up any mail that’s in our box since we’re literally going right past it.