Transit to Indianapolis and Eastward

I wanted to put up a post but essentially we’ve done nothing since leaving Devil’s Tower.

We left on Friday Sep 11 and stopped or the night 300odd miles later in Oacama SD at Al’s Oasis RV. Got up the next morning and drove to Council Bluffs IA another 345 miles. Our original plan was to stay at the Honey Creek Park…we talked to Chad in the middle of the afternoon and they had one opening so we drove over there. Took a look at the site and decided we would have a hard time getting into it with the house and BAT so we skipped it and went to the Horseshoe Casino in Council Bluffs IA instead. It was a parking lot but had hookups and was close to the freeway.

As I write this it’s Sunday afternoon and we’re headed out again in the morning 294 miles to the Clarks Ferry COE campground on the Mississippi River right near Davenport IA…we’ll stay there 2 nights so Connie has a day to work.

From Davenport we’ll head another 323 miles to Indianapolis IN on Wednesday and stay there until Monday Sep 21. Monday we’ll leave for a 414 mile day over to Dawson WV then another 243 on Tuesday to Pocahontas State Park in Chesterfield right near where Bryan, Jen and Alex live.

I probably won’t post again until we get to the human kids house…unless we end up finding something photo or blog worthy in either Davenport or Indianapolis…ya never know.

Connie’s starting to get psyched about seeing Alex and the kids again…and also getting her car back.

Here’s a couple of photos…just so ya will know that despite being mythical creatures they do actually exist. These were taken by our friends Bill and Linda. The day we flew up to the Gates of the Arctic National Park at Anaktuvuk Pass they headed east from Fairbanks 50 or 60 miles to explore and happened across this guy on their hike. 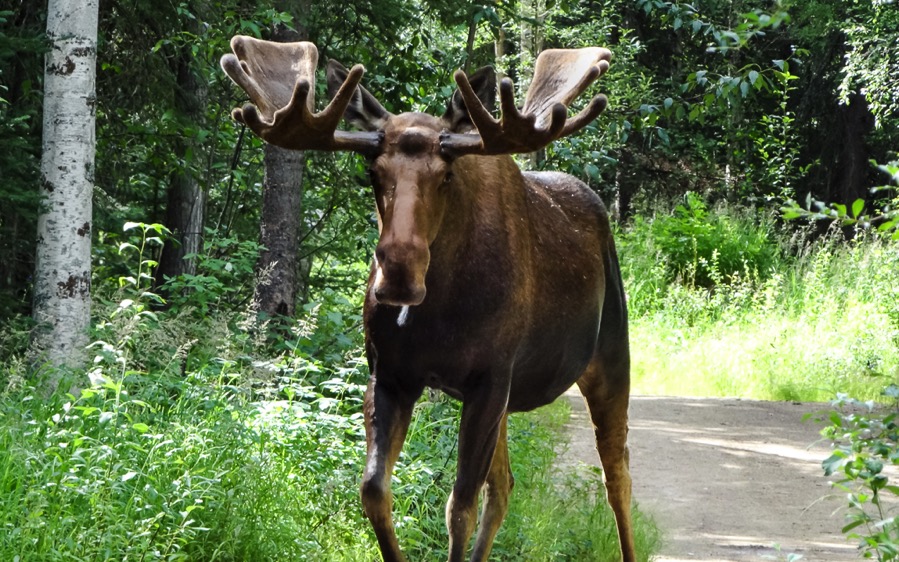 4 Responses to Transit to Indianapolis and Eastward