Well, the title pretty much says it all…it’s been 3-1/2 weeks since my last post and although I wish I could tell ya about all the cool stuff we been doin’ it just ain’t so.

Neil’s been continuing our minor repairs, we bought a bunch of stuff we needed from Amazon and other places, been doing some bike riding and that’s about it. He hasn’t even been down to the eagle’s nest yet although it appears we may have eggs soon according to the eagle cam web site at http://dickpritchettrealestate.com/blog.html. M15 has been delivering fish for Harriet and both have been mating and doing nest building activities so hopefully it will happen.

Connie’s been working…getting her students sorted out and assigned. We’ve been Elk-ing for beer and bingo (and also for fish one night and broasted chicken one night) and the’’s been about the highlight of our activities.

The weather has continued to be pretty hot…80s most days although earlier this week it did cool off enough to open up and get a little fresh air but then it heated up again and the past 2 days have been rainy and humid. The park really started filling up on Dec 1…it’s mostly monthly folks that stay here so that’s not surprising at all. Several friends have returned and Seminole is starting to seem like a community again.

We did get some shots of Alex and his proud parents…Bryan and Jen got photos for his first birthday which is coming up in a week. Connie sez “He’s sooooooooo cute!” I gotta admit…he’s better looking than most babies. 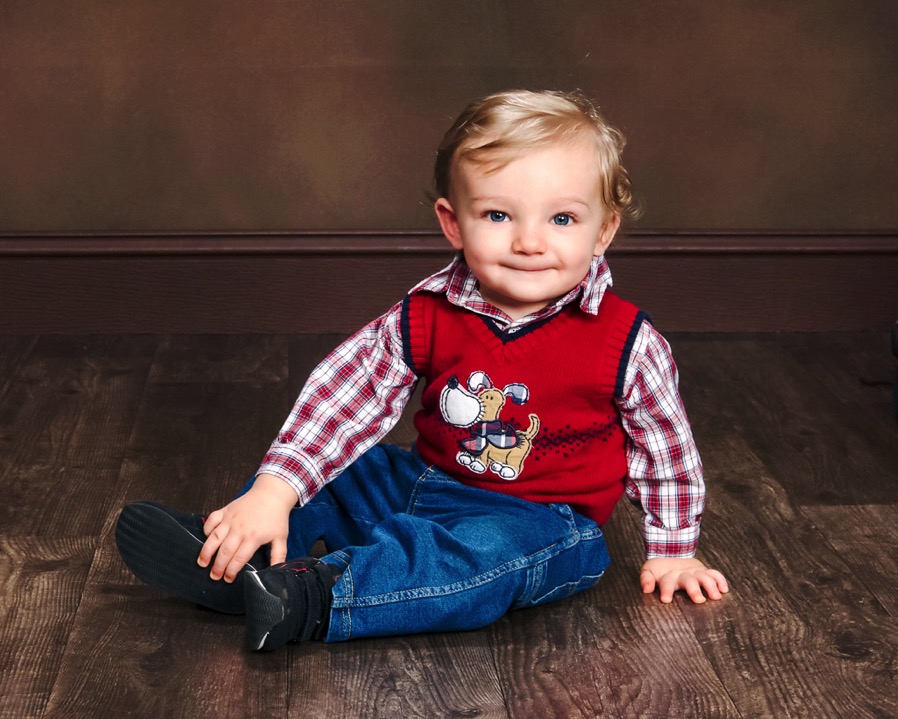 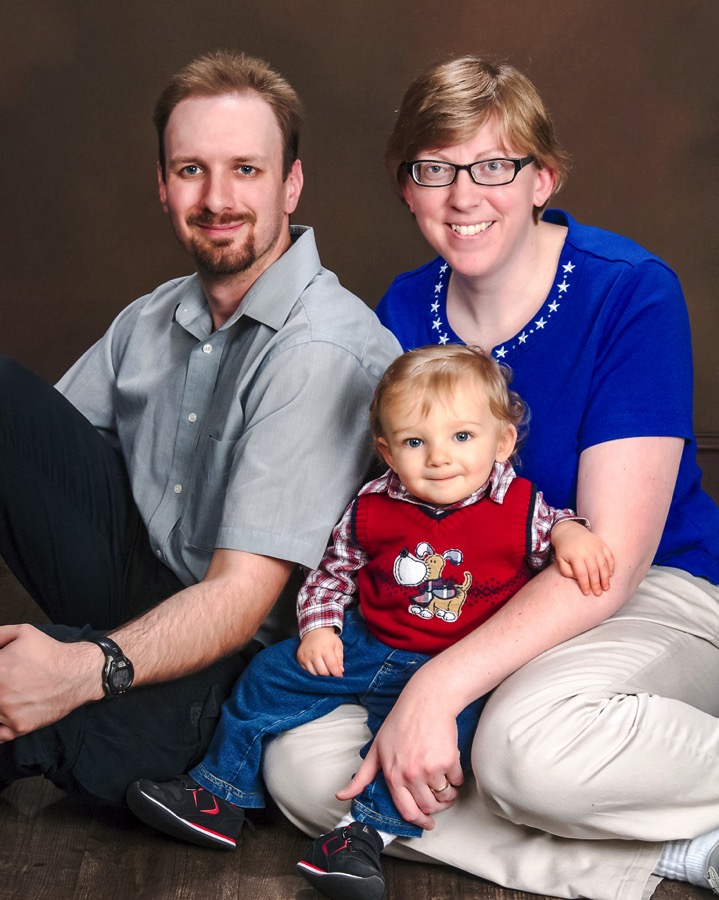 The adults had their 39th anniversary on Nov 20…we headed out to the Nauti Parrot Tiki Bar and had a great dinner out then came home for some home made eggnog. Earlier this week it was Connie’s birthday…61…yikes!! She got to pick the place and amazingly enough picked the Nauti Parrot again…we sat in our usual spot at the bar and had great food again then stopped by the Elks for a celebratory drink.

Here’s a couple shots of her on the way out for her birthday…she cleans up pretty good…don’t she? Neil sure thinks so…but then he just might be the tiniest, teeniest bit biased. She picked the dress…Neil suggested the red shoes instead of whatever she was originally pulling out and she picked the hair flower to match. 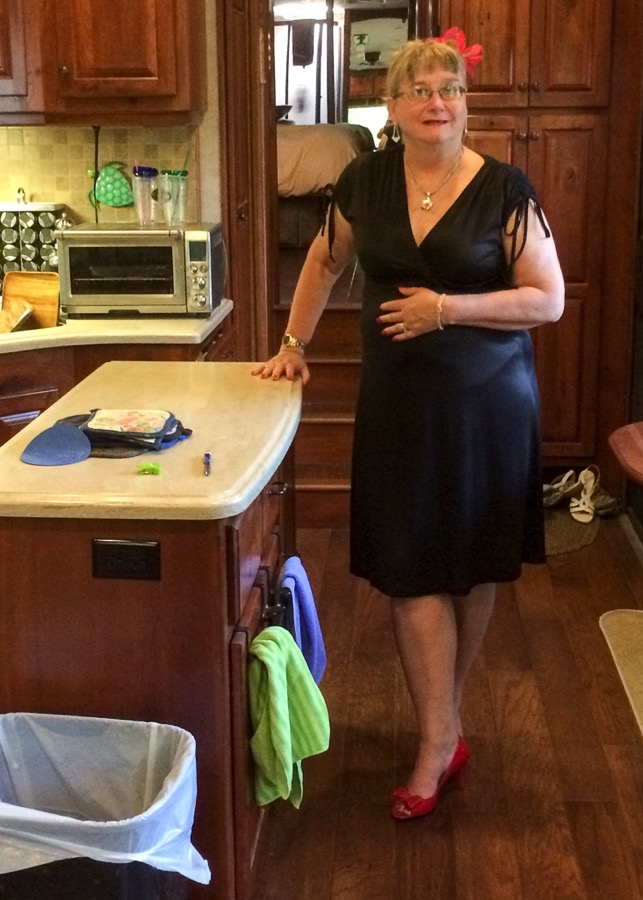 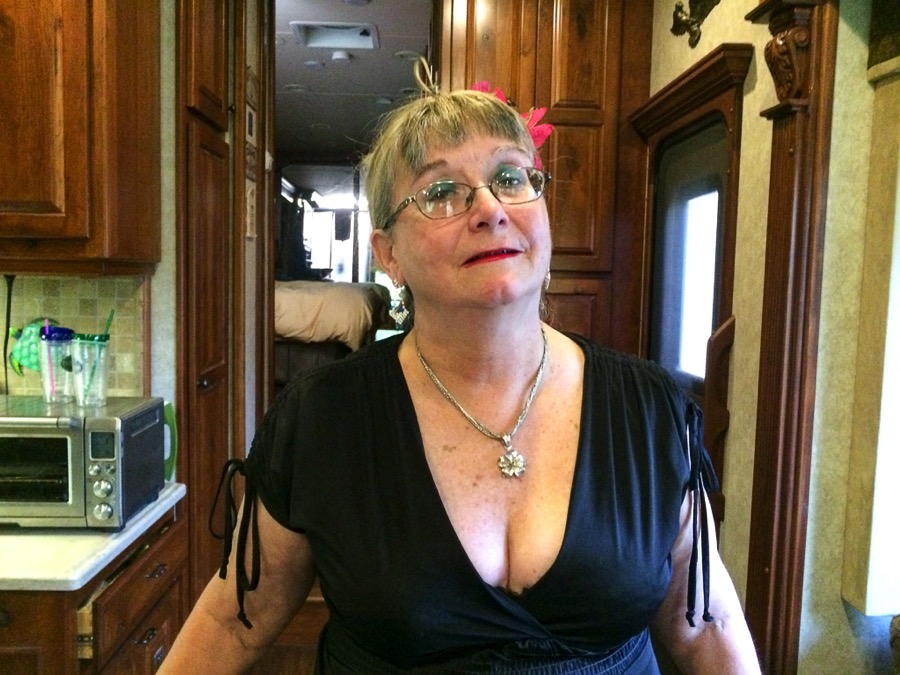 And that’s about it from down here. I’ll try to do better on posting and put up something at least weekly…but at the rate we’re going it won’t be all that exciting. Neil’s started work on our travels in the spring…at this point we think we’re going to extend our stay until April 15 instead of April 1…we need to go to Indiana in the spring and don’t want to get too far north too early…that dreaded S word ya’ know. After that we have the New Horizons Owners Group rally in Chattanooga in mid May then will spend from mid June to September in the Canadian  Maritimes.

Time’s been flying though…even though we haven’t been doing anything. Our nominal stay for the winter is 5 months…and none of us can really believe that we’re over a month into the stay which means it’s only 4 short months more until we head out. I’m guessing it will slow down by the holidays though…and that we’ll be real to hit the road again by the time we’re due to leave.

2 Responses to We Ain’t Dead!!