Sunday afternoon (Apr 17) after Mass Connie did all our planning for the week and when she was done with that we decided to head off and visit the Raccoon Mountain Pumped Storage Plant and the nearby associated reservoirs.

About 15 miles south of Chattanooga the Tennessee Valley Authority (TVA) erected a dam back in 1967 for generation of hydro-electric power. Due to the available area for containing Nickajack Lake behind the dam they were only able to make the dam about 80 feet tall. This means that in the generator room at the bottom of the dam there is only about 75 pounds per square inch of pressure available at the entrance to the electrical generation turbines. While this is sufficient to generate electricity you really don’t get very efficient generation at such a low pressure. So…in a twist on generation of hydro-electric power the TVA decided to include a pumped storage facility…there aren’t very many of these in the world so I figured I would tell you a little about it.

It starts with the dam downstream and it’s associated generation capacity…during hot days the output of this dam is pretty much completely absorbed by the power grid but during the nighttime the demand goes down and hence the load on the generators. The water still has to be released from the dam to keep the river flowing…so the question becomes do you just release it through the sluice gates or use it to generate power. The latter is obviously better as the power is essentially generated for free during nighttime/low demand hours…so what do you do with it.

Well…the answer is that you use a pumped storage facility back on Raccoon Mountain about 15 miles upstream in the lake. What happens here is that at nighttime when the demand on the dam’s generators is low you use that extra power to pump water uphill to the top of Raccoon Mountain into a manmade lake up there. This is about 1,000 feet higher than the river level…which means that once you connect a 35 foot diameter tunnel to the bottom of the 230 foot deep upper reservoir you have about 800 feet of elevation drop to a second set of generators at the pumping station…800 feet gives you about 350 psi of input pressure and generators are pretty efficient at that higher pressure. The same turbines that normally spin the generators when power is going generated pump water in reverse at nighttime…and then the water in the upper reservoir is used to generate power during peak demand times on hot summer days. Pretty neat idea if you think about it.

The pumped storage facility generates 1,6562 megawatts compared to the 104 megawatts generated by the main Nickajack Dam…and the upper reservoir proves 22 hours worth of water storage…it takes 28 hours to fill it completely.

The storage facility is about 4 miles from our campground so we stopped by it to take a look around.

First up on our tour was a display of one of the valves used in the system…this has an inner diameter of about 10 or 12 feet and the whole inside white part rotates 90 degrees towards the camera when the operating arm on the left side is moved by the actuator motor…thereby shutting off the water flow.

A couple of shots downstream and upstream from the lower pumping station where water enters the storage system for pumping uphill and exits the system after generating power on the way back downhill. 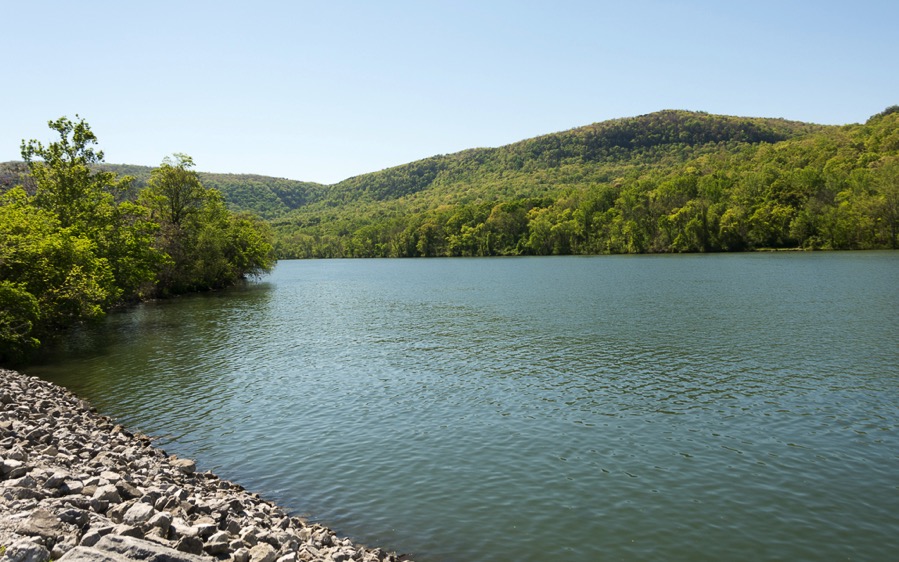 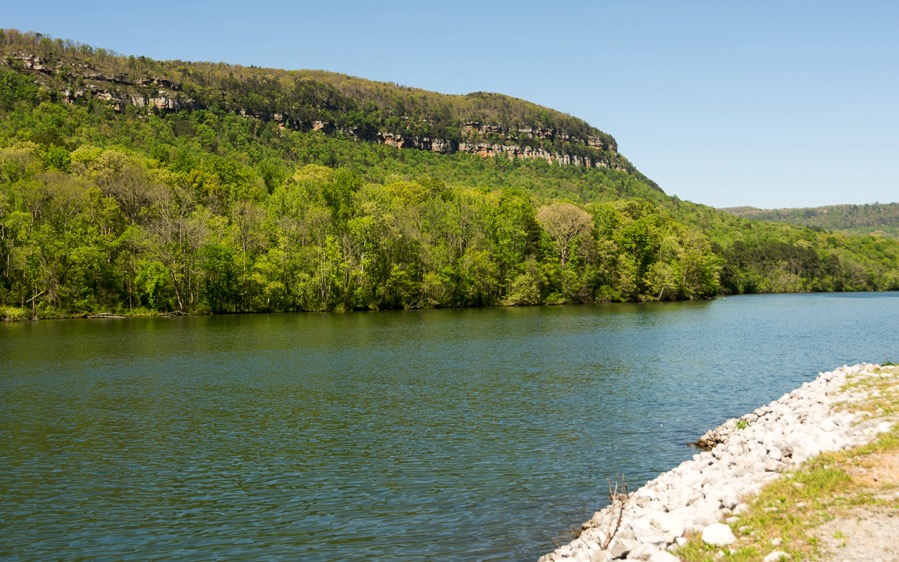 The top of the 230 foot tall intake structure in the upper reservoir…the slots in the side prevent whirlpools from developing when water is going downhill…when pumping uphill the water comes back out of these slots into the lake.

Looking out over the upper reservoir…there was an existing box canyon at the top of the mountain and the TVA built a 230 foot tall 8,500 foot long earthen dam to turn it into the upper reservoir. The dam starts on the right of the image and goes to the left then loops back to the right and then left again in an S-shape before exiting the frame on the far left. There’s a one way one lane road on top of the dam we drove around. The intake structure was immediately behind Neil when he was taking this photo and and the lower pumping station was over his right shoulder and down the mountain. 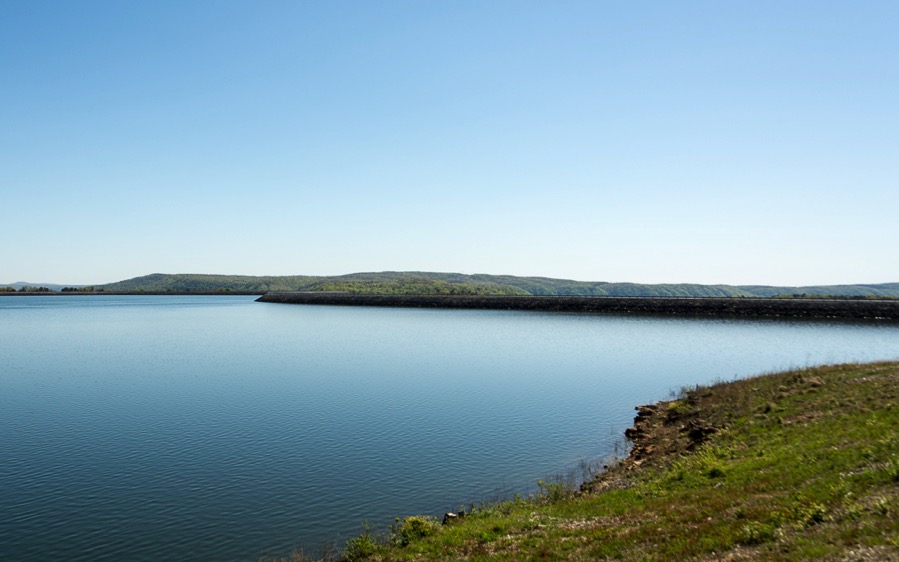 The road and dam after we drove around to it…this location is on top of the dam just inside the right edge of the photo above. The dam is 250 feet or so high and I’m guessing probably 350 feet thick at the base. It doesn’t have  any spillway or sluice gates that we could see…I guess if it it overfills due to rainfall (there are no natural sources feeding into the lake beyond the water pumped from Nickajack Lake below) they just produce a little power or simply let the water bypass around the generators into the lake below. 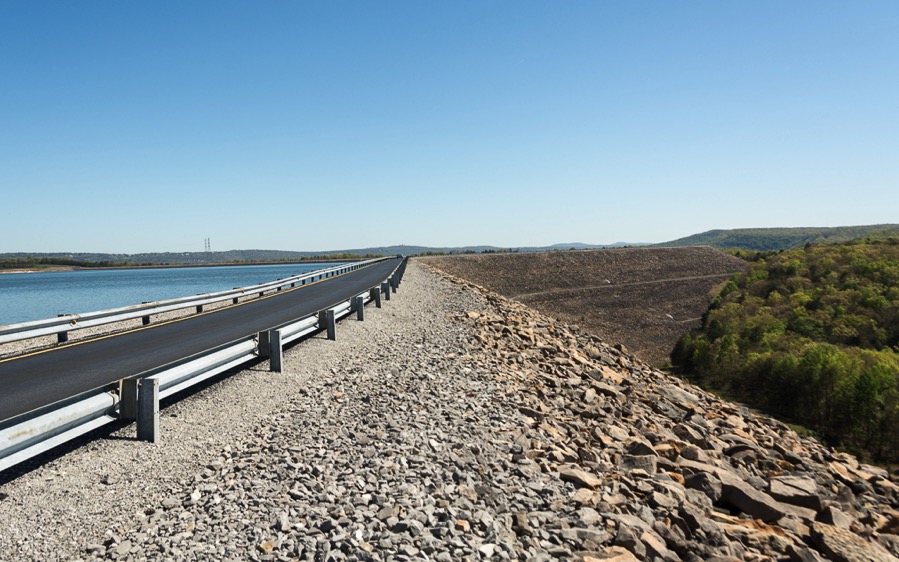 On the way out…we stopped by another display we had seen…this is one of the pump impellers that is used to pump the water uphill. For those of you who aren’t familiar with pump impellers…it fits inside a casing with pretty tight tolerances around the sides and bottom. The suction (inlet) side of the pump comes into the bottom, it rotates towards Connie doing her best Vanna White imitation and each of the openings you can see on the side curves around and down into the inside of the suction side of the impeller. There’s a single discharge line connected to the pump casing just above Connie’s head so each chamber in the impeller (a volute in engineer-speak) essentially throws the water into the discharge plenum and thence into the piping up to the upper reservoir. Pumps like this probably turn 800 or 1,000 rpm maximum…and this one would be powered by a motor in the thousands of horsepower since it has to generate the same 350 psi as comes down during generation operations in order to pump the water 800 feet uphill.

With that we headed home for dinner. Neil grilled some chicken breasts on the barbie and made a quite excellent corn casserole…corn, chopped green chilis and onions with a little cream and flour mixture to make a sauce then panko bread crumbs and Parmesan cheese grated on the top. It was quite yummy and we even had leftovers of chicken and corn for Monday’s dinner.

Monday (Apr 18) Connie had to work in the AM and Neil did some troubleshooting and figured out why our awning isn’t retracting. Long story short is we can still use it but since the fabric has stretched over the years it means that the brackets are binding a bit just as they’re almost fully in…but he knows how to work around the problem for now but we’ll have to get it repaired once we return to Fort Myers…but it’s just too hard on the road since we’re never in any one place long enough for a tech to see what it needs, order the parts, and get them installed before our departure.

After lunch we headed off on a 5 mile or so trip down to downtown Chattanooga to see the River Walk redone section of the area right alongside the river. It was pretty hot so we just did a couple of miles total before getting back to the car and heading off on our one errand for the day before heading back for dinner.

We walked by the river boat Southern Belle which moors right at Ross Crossing and does daily trips up and down the river for sightseeing.

We also got this shot of the Market Street Bridge…which when it was built in 1917 was the longest bridge of it’s kind in the world…the center movable span is 358 feet long. The bridge only raises to a 45 degree angle on each side. This bridge is a Metal Three Hinged Braced Ribbed Through Arch Movable Double Leaf Scherzer Rolling Lift Bascule bridge…which seems like a lot of descripters…let me translate for those of you who don’t do engineer-speak. 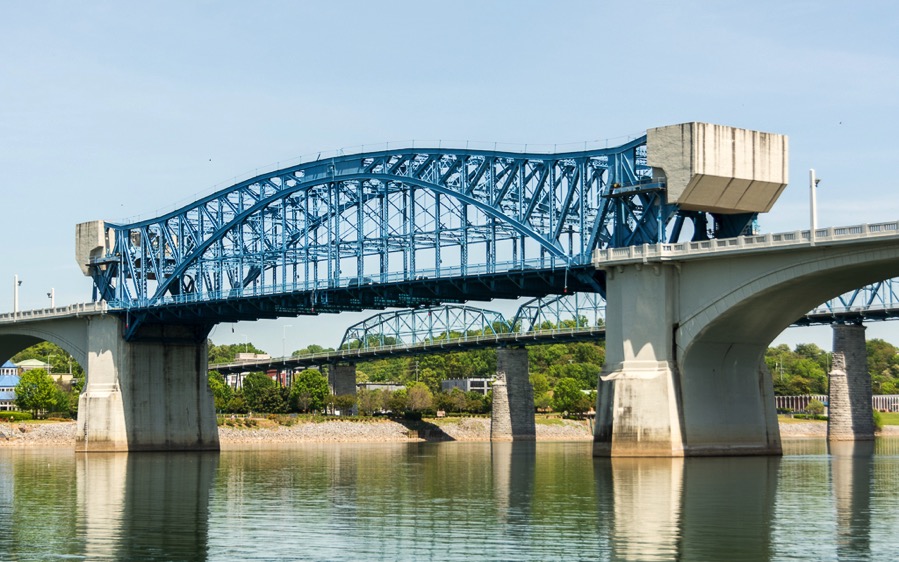 Connie wondered why we couldn’t just call it a drawbridge…but Neil told her that drawbridge was just too general…it would be like just calling them cookies instead of oatmeal-chocolate chip-pecan-raisin cookies or white chocolate-macadamia cookies.

With that we headed over to the nearby Camping World for some replacement sewer dump hoses…we had a catastrophic failure of one of ours the other day…but at least it was after we were done dumping and we didn’t spread poop all over the campground. Whew!

Dinner was leftover chicken and corn casserole and some canned pears with mayo on them for dressing. Again…pretty yum and even better it was easy.

Tuesday (Apr 19) we had more fun stuff scheduled…a couple of waterfalls associated with 2 short hikes…so after coffee and some muffins for breakfast we headed off shortly before 1000. First stop was Laurel Falls about an hour and a quarter northwest of the campground. We did most of the drive on 45 mph country roads and most definitely felt like we were deep into banjo country all day.

On arrival we got parked, changed into our hiking shoes and did the short hike…well, it was short in distance but dropped about 80 feet or so between the parking lot and the falls overlook…down to Laurel Falls.

Here are two HDR shots of the falls which were about 40 or 50 feet high Neil estimated. One was HDR’ed within his normal Adobe Lightroom photo management program…the second was exported to another HDR application Photomatix  Pro then the result was imported into Lightroom…he can’t decide which one he likes better so ya get to see both of them. 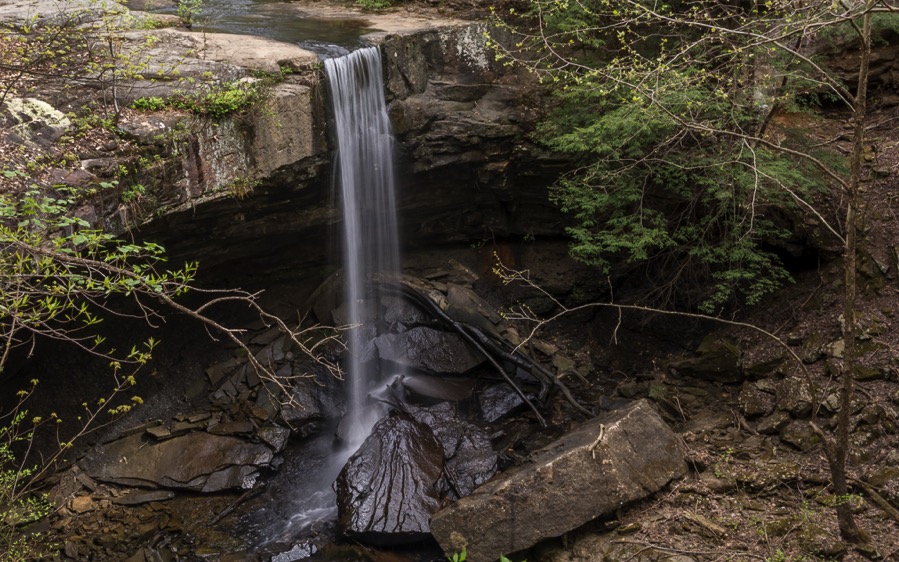 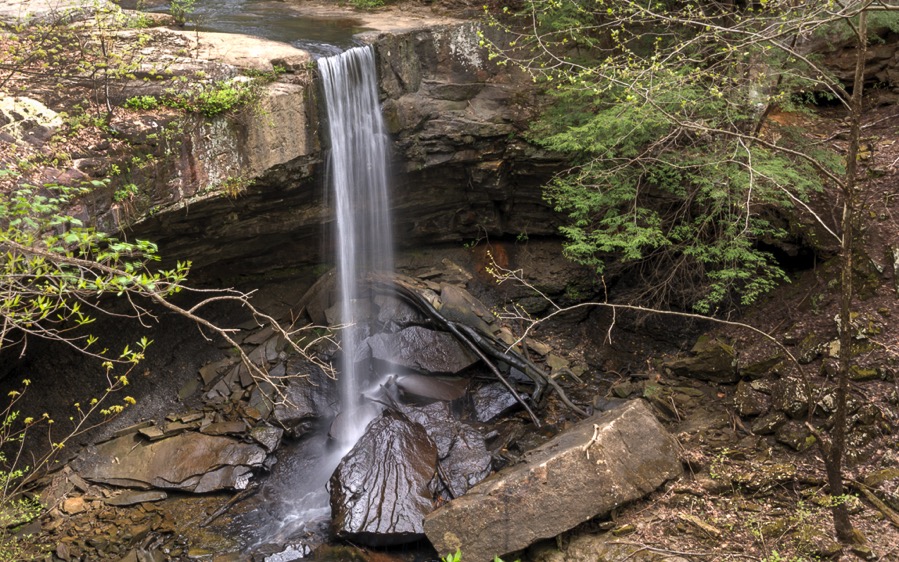 From there…we hiked back up to the car and set off for our second destination…Foster Falls…which was just about a half mile off the road we came up from Chattanooga on so wasn’t really out of the way. 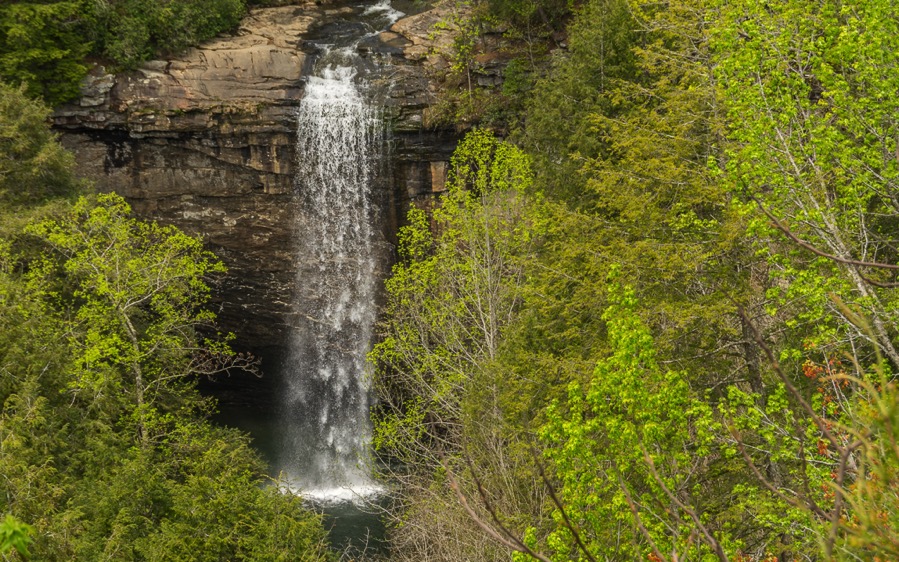 The hike to the falls overlook was only a couple of hundred yards…we thought about taking the entire trail down to the base of the falls but it was most of a mile down there and probably 250 feet of drop into the gorge…which would have meant 250 feet of climbing to get back out. After talking about that, the temperature which was getting pretty warm, and considering this was basically our first day hiking of the travel season we elected to forego the base hike and take what we had…so we got back in the car and came home.

Connie found a couple of nice flowers…one from each short hike.

On arrival home we rested awhile then Neil grilled some Italian sausage, onions, and a red pepper we bought on the way home from the Ingles grocery stores…then made a wrap out of all of that and a tortilla. Had a couple of brews to wash it down and it was mighty tasty.

Tomorrow’s a work day for Connie…so I think I’ll go ahead and post this…we’ll have more Fun Stuff© Thursday and Friday before our departure on Saturday morning for Louisville KY.

Interesting Things of the week.

We discovered that if you crush a marshmallow peep you get Kim Jong-un.

This guy has to be the original source of the phrase…”You had one job.” 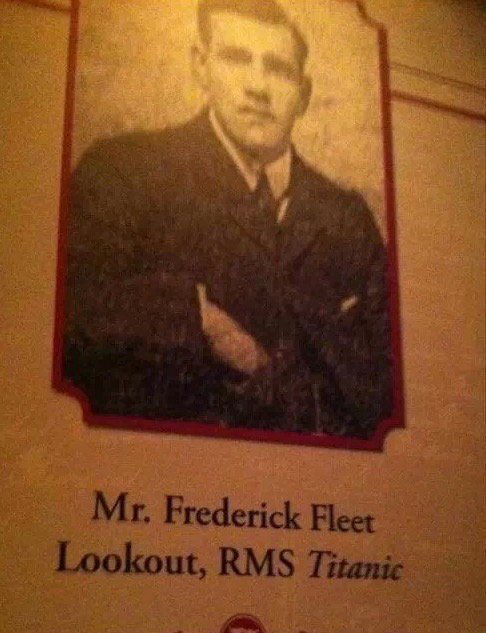 No photo for this one…but how come if you can buy Batman Shampoo…how come there is no Conditioner Gordon?

And finally…a rare view of where The Donald grows his hair.