Wednesday (Apr 20) was supposed to be a  lousy day…so Connie worked and Neil just puttered around. The only thing we did was head over to the 1885 Grill for dinner about 1700…we had tried to go there last Saturday when we arrived and it was wall to wall people with at least 25 waiting to get in so we punted then and ate at Logan’s Roadhouse instead.

Wednesday…the lines were non-existent…in fact when we arrived there were very few people there. We sat at the bar as per our usual and had a couple brews each…started off with a Chattanooga Brewing Company Brown Ale…we didn’t think much of it as it was fairly spicy…not hops but more of a bitter type flavor which didn’t really do anything for us. After that we had a Vienna Lager from Devils Backbone Brewing Company. For dinner…Connie had some grilled trout and Neil a burger…both were pretty decent.

Thursday (Apr 21) we had a scheduled trip to the Chickamauga and Chattanooga National Military Park. This was a driving tour over these two battlefields…and while it was interesting it wasn’t as nice as other Civil War battlefields that we’ve toured as not having the docent to give you the guided tour makes for a harder to understand battle.

We watched the movie at the visitor center first…and found out a few interesting facts about Chickamauga…Neil had only vaguely heard of this battle and knew nothing of the details while Connie had just a little more familiarity with it. Chickamauga however…was the second bloodiest battle of the entire war after Gettysburg. Everybody has heard of the latter, Vicksburg, and the Wilderness…but Chickamauga’s 34,000 combined casualties ranks only behind Gettysburg and that number is more than the total US casualties in the Revolutionary War and the War of 1812 combined according to the Park Service movie…Neil’s not sure about this as it all depends on how you define Revolutionary War casualties. Wikipedia shows 6,824 killed in battle, 25,000-70-000 dead from all causes during the war, and up to 50,000 total casualties including wounded. The War of 1812 had about 6,700 killed and wounded…so he doesn’t see now the Park Service claim can be true…

In 1863…Chattanooga was strategically important as the intersection of 4 major railroad lines and the Tennessee River and control of it was considered vital to either allow Union forces to be supplied as they drove southeast towards Atlanta and for the Confederate army to prevent that surge. Southern forces were in control of the city until September when Union forces outmaneuvered him by crossing the Tennessee River and coming into his rear from the area of Lookout Mountain. General Bragg started withdrawing his forces to the southeast and was pursued by Union forces who assumed Bragg was retreating towards Atlanta. Bragg however…had been reinforced and ambushed the Union forces along Lafayette Road south of the city. His hope was to defeat them…thereby forcing them back north and allowing Bragg to retain control of Chattanooga.

The battle actually started accidentally when Union troops stumbled across Confederate positions near the Chickamauga Creek and over Sep 19 and Sep 20 gradually moved northward towards the city…a miscommunication in the Union forces allowed the Confederates to split them into two parts…the southern group surrendered and the northern group retreated to and occupied Chattanooga.

At that point…Confederate forces occupied the high ground on Lookout Mountain and Missionary Ridge south of the city and laid siege to it…unfortunately the railroad lines on the northern bank of the river allowed supplies and reinforcements to arrive and on Nov 23 they marched forth to assault the two high grounds. Union forces were successful in retaking the two peaks due to strength of numbers…usually the forces on the high ground win but when outnumbered almost 2 to 1 they were not able to hold the heights. The occupation of the two ridges solidified Union control of the city…and Sherman used it as his stepping off point for his march to the sea in late 1863.

As I said…there wasn’t nearly as much about the battles themselves at this park…it is mostly a park full of memorials to the dead and wounded of the various units (Union and Confederate) that were involved. We did take the self guided auto tour but there was very little in the way of fortifications, signs, or docents to explain the why’s as we’ve seen at other battlefields.

We did get a few shots though…

This is a monument/lookout tower at the northern end of the Chickamauga battlefield. 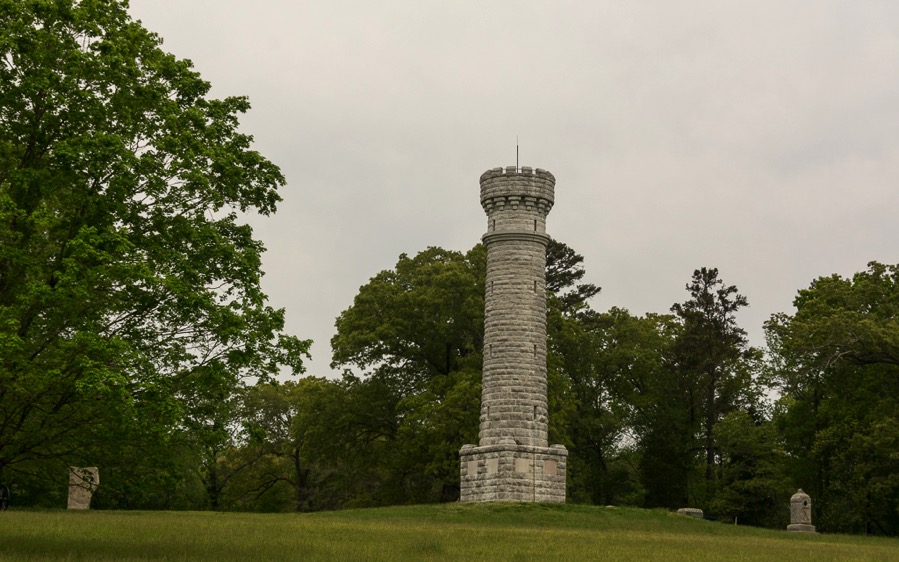 A shot of Connie Neil took from the top of the tower (136 steps up…she declined to climb them).

From there we headed up Lookout Mountain sort of the back way after picking up a sandwich for lunch…unfortunately we got to the top and found that all the parking was metered, only took quarters, we had no quarters with us, and didn’t see any place to get change…so we pretty much blew off the Lookout Mountain portion of the battlefield with one exception.

Craven’s House…which was owned by a farmer named Craven…is situated on the northernmost tip of Lookout Mountain overlooking the city and was used by General Bragg for his headquarters during the siege…it was captured by Union force during the battle in November and the rest of the mountain was abandoned by Confederate forces afterwards as Union forces then controlled the northern end of Lookout Mountain and hence the heights over the city.

We had our lunch there then headed home…the view of Chattanooga is supposed to be great from there but it was an overcast day with pretty heavy haze down in the valley so you really couldn’t see much.

Friday (Apr 22) Neil’s sister Mary Jane and her daughter Lauren drove over from Knoxville for a short visit…we went to the Lookout Mountain winery and had wine and pizza for lunch before they headed home in the late afternoon.

Neil did all the outside stuff Friday afternoon for our departure tomorrow morning…dumped tanks and stowed the hoses and took down the flag. So all we’ve got in the morning is power, water, hitch, and go.